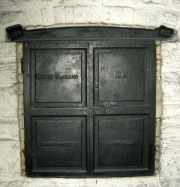 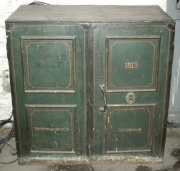 John Whinfield of Pipewellgate, Gateshead who constructed the second locomotive ever built in the world to the design of Richard Trevithick

Reports of Trevithick’s Pen-y-Darren locomotive came to the attention of Christopher Blackett, the proprietor of Wylam Colliery (Newcastle), who ordered a locomotive from Trevithick. This was built at Whinfield’s Foundry, Pipewellgate, Gateshead owned by Trevithick’s sort-of-agent for the North East, John Whinfield.

A Trevithick-type locomotive built for Wylam by John Whinfield of Gateshead in 1805 never went into service, and the line was relaid with L-shaped plate rails in 1808.

John Steele who had worked on the building of the locomotive at Pen-y-Darren (according to some sources but that is disputed[1]) supervised the construction.

Two cast iron cupboards (or safes?) dated 1813 can be seen at Beamish Museum. Both include 'Gateshead', while one also has 'Bishop Aukland' cast in (see photos).

1802 'SKINNER-BURN FOUNDERY AND CORN MILL.
J. WHINFIELD and CO. inform their Friends, and the Public, that they have compleated their new STEAM ENGINE, their BORING and their CORN MILL are at Work again; and having increased the Power of their Engine so to carry all the Machinery in both Mills at the same Time, they can and will execute the Orders of their Friends at the shortest Notice possible.
They have for Sale the Materials of their old Engine, viz.
1 Cylinder 7 Feet Long, 32 Inches Diameter, with Bottom and Piston, With Shanks, &c. ;
1 Beam compleat With Gudgeon, Chain, &c.
1 Connecting Shaft or Crank Rod with Joints, &c.
1 Jack Head Beam compleat, &c.
Several small Pipes about 6 Inches Diameter, flanged; also, Clay Mill Edge Stones, 5 Feet 6 Inches Diameter, 12 Inches thick, with Metal Rim, 2 Inches thick; 1 Plate for ditto, 7 Feet 6 Inches Diameter ; the Crown Wheel, 11 Feet 2 Inches Diameter, with Upright Shaft and all other Parts belonging.
2 Metal Cylinder Bellows, 27 Inches Long, and 45 Inches Diameter, with Pistons, Covers, and Machinery belonging them.
2 Pair of Derbyshire Mill-Stones, 5 Feet 2 Inches Diameter, 10 Inches thick at the Edge, and 16 Inches at the Eye.
1 Street Bogey almost new, with Wheels.
1 Long Cart and Wheels.
1 Pair of large strong Iron Blocks, with six Sheaves in them, 9 Inches Diameter, and 2 l-4*h Inches trod, and all to suit. [2]

1803 Advert: 'Improved and simplified Patent Steam Engine.
We, Messrs. Richard Trevithick, Andrew Vivian, and William West, of Camborne, in the County of Cornwall, respectfully inform the Public, that we have appointed Mr John Whinfield, of Gateshead, in the County of Durham, Iron and Brass Founder, our Agent, to make, sell, and erect Steam Engines, upon the Principles for which we have obtained a Patent, within the several Counties of Northumberland, Cumberland, Westmoreland, Durham, Yorkshire, and Lincolnshire; and request all Orders, on that Ac- count, to be executed in any of those Counties, may be sent to Mr Whinfield.
-Signed, RICHARD TREVITHICK, ANDREW VIVIAN, WILLIAM WEST.
N. B. These Engines are considerably cheaper than any other Engine at present in Use. They require no Injection-Water, having neither Condenser, Air-Pump. &c. or Working Gear; have no Beam, &c. and require only a Sufficiency of Water to supply the Waste in the Boiler, which is about half a Gallon per Minute for an Engine of Ten Horses' Power. The Steam, after it has done its Office, may be condensed and returned to feed the Boiler again.'[3]

1808 Partnership dissolved. 'Notice is hereby given, that the Partnership carried on between us at the Skinner Burn, in the County of Northumberland, near Newcastle-upon-Tyne, as Civil Engineers, under the Firm of Phineas Crowther, is this Day dissolved by mutual Consent; and that all Debts due from and owing to the said Partnership are to be paid and received by our undersigned Phineas Crowther: As witness our Hands the 16th Day of April 1808, John Whinfield and Phin. Crowther.'[4]

1824 'To be SOLD by Auction.
By order the Assignees of the Estate and Effects of John Whinfield and Thomas Thompson, bankrupts,
(JOHN GRIEVESON, Auctioneer)
At the Foundry of the said Bankrupts, in Pipwellgate, Gateshead, Durham, Monday the 2d. day of February next, and the following days , commencing at 11 o'clock in the forenoon of each day,
ALL the valuable BRASS and other PATTERNS, METAL BOXES, IMPLEMENTS, STOCK OF CAST IRON, UTENSILS, and other EFFECTS of the said Bankrupts, now being and upon the said Foundry.
And at the house of Mr Kenmir, innkeeper, Foot the Battle Bank, Gateshead, on the 11th day of February next, 4 o'clock in the afternoon,
All that most desirable Leasehold MESSUAGE or TENEMENT, forming part of the very eligibly situated Foundry lately occupied by the said Bankrupts, in Pipewellgate, Gateshead, held under lease for 50 years, from the 2d day of February, 1807, at a small reserved rent.
And also, all those FREEHOLD MESSUAGES, TENEMENTS, WAREHOUSES, SHEDS, COUNTINGHOUSE, YARD, QUAY or WHARF, and PREMISES, the greater part of the said Foundry, situate aforesaid, and adjoining the said Leasehold Messuage on the west. The premises may be viewed by applying the Auctioneer; and further particulars may be had of Mr Harry Ingledew, Solicitor, Dean-Street, or Abraham Dawson, Solicitor, Rosemary Lane, Newcastle.'[5]