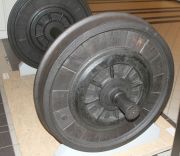 Wood-filled railway carriage wheels made to Beattie's patent by Fox, Henderson and Co in 1856. On display at Vienna Technical Museum 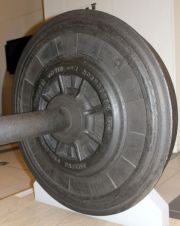 Beattie was a highly innovative engineer, introducing the country's first successful 2-4-0 locomotive, pioneering coal-burning fireboxes, feed-water heating and balanced side valves. His locomotives were amongst the most efficient of the time. 3 of his most famous locomotive design, the 2-4-0 T Well Tanks, were in service for 88 years, until 1962. Two have been preserved - see the Swanage Railway, Bodmin and Wenford Railway and the National Railway Museum, York.

Joseph Beattie was born in Ireland on 12th May 1808. He was educated in Belfast and initially apprenticed to his father. a Londonderry architect. He moved to England in 1835 to serve as an assistant to Joseph Locke on the Grand Junction Railway and from 1837 on the London and Southampton Railway. After the line opened he became the carriage and wagon superintendent and succeeded John Viret Gooch as locomotive engineer on 1st July 1850.

Initially he designed a series of singles, but the weight of the Southampton and Salisbury expresses led to the development of 2-4-0s. He continued to develop the design over the next 20 years. In addition he developed a series of 85 2-4-0 T well tanks and 0-6-0s.

1862 Published a method for fireproofing buildings and ships[1]

Joseph Beattie's celebrated outside cylinder 2-4-0 well tank engines (image 1863) of which there were about eighty, cannot be passed over. With the exception of three, all were built by Beyer, Peacock and Co, from 1863 to 1874, and until about 1890 most of them worked the extensive local traffic in the London area. Although of small size, they were extremely smart and fast-running engines, even with fairly heavy loads.[2]

Beattie died of diphtheria on 18th October 1871 and was succeeded as locomotive engineer by his son William George Beattie.

Joseph Hamilton Beattie, the son of Mr. George Beattie, an architect and builder in the north of Ireland, was born on the 12th of May, 1808.

He served an apprenticeship under his father, and for several years was engaged in the same business.

In 1835 he left Ireland, and obtained employment under Joseph Locke, Past-President Inst. C.E., at first as an assistant engineer on the Grand Junction Railway, and in 1837 on the London and Southampton, now the London and South Western railway, and he superintended the construction of a large portion of the buildings and the laying of the permanent way.

Subsequently he was entrusted, in addition, with the charge of the carriage and wagon stock of the line, and in 1851 he was also appointed locomotive superintendent, and these joint offices he retained till his death.

Mr. Beattie took out many patents for improvements in railway rolling stock, which have resulted in increased efficiency, safety, and economy of working.

His first patent, in 1840, included a contrivance for enabling an increased proportion of the weight of a locomotive engine to be temporarily placed upon the driving wheels when necessary; also improved construction of buffing springs, breaks, and signalling apparatus between guard and engine-driver, couplings, chairs, wooden railway wheels, and a duplex lathe, by which two wheels can be turned at the same time.

Other patents followed, relating to the construction of permanent way, apparatus for heating the feed water of locomotive engines, fire-boxes for burning a mixture of coal and coke, and for burning coal instead of coke, oil axle-boxes for engines and carriages, axles, tires, modes of attaching the tire to the wheel, safety guide rails to be used on sharp curves, and an arrangement of perforated piping to be connected with the water-mains for extinguishing fires in buildings and warehouses, which was afterwards applied to the shops at Nine Elms in which the painting and repairing of railway carriages are carried on.

But it was for the economies he effected in the consumption of fuel in working locomotives that he obtained the most repute. So far back as 1851 he noticed the waste of fuel in the process of manufacturing coke for locomotives, and found that a third of the weight of the coal was lost, and passed off as smoke. It was afterwards shown in practice, that coal possessed an evaporative power equal to coke, and was not so destructive in its action on the tubes of the boilers. However, it was necessary to consume the smoke evolved, both to avoid the nuisance and to obtain the full evaporative power of the fuel, and to this problem Mr. Beattie, among other railway engineers, for some time gave his almost undivided attention.

The earlier coal-burning engines were constructed with fire-boxes considerably larger than the coke-burning fire-boxes; they were divided transversely into a front and back furnace, and had also a combustion chamber partly filled with perforated fire-bricks in the barrel of the boiler: but in later engines, Mr. Beattie found that almost equally good results were obtainable by using a still larger fire-box without the combustion chamber.

By another arrangement he utilised a portion of the waste steam for heating the feed-water to a temperature of nearly 212 degrees Fahrenheit, and in that way saved about 13.5 per cent. of the fuel formerly used. These measures effected a saving of £30,000 a-year on the London and South Western Railway, where the system is adopted to its full extent; and the improvements introduced by Mr. Beattie were so generally adopted, that he realised a large fortune.

In 1863-4 he designed the arrangement of the new workshops, and the machinery for the use of the locomotive and carriage department, of the London and South Western railway, at nine Elms.

He was elected a Member of the Institution of Civil Engineers on the 1st of December, 1857, but he was not a frequent attendant at the meetings.

He died on the 18th of October, 1871, from inflammation of the lungs, after an illness of three weeks, leaving a wife and three sons, the second of whom succeeded him as locomotive engineer to the London and South Western Railway Company.

JOSEPH HAMILTON BEATTIE was born on 12th May 1808, and was first engaged professionally in 1835 under Mr. Joseph Locke as an assistant engineer on the Grand Junction Railway.

In 1837 he superintended under Mr. Locke the construction of a large portion of the buildings, workshops, and permanent way of the London and Southampton Railway; and upon the completion of this line he undertook the charge of the carriage and wagon stock and the maintenance of the station buildings.

In 1840 he introduced several improvements in the construction of railway rolling stock, consisting of improved forms of buffing apparatus, breaks, couplings, wooden railway wheels, an apparatus for placing an increased proportion of the weight of a locomotive engine upon the driving wheels when necessary, and a duplex lathe for turning up the tyres of wheels.

In addition to the carriage and wagon department of the London and South Western Railway, the locomotive department was also placed under his charge in 1851, when he brought out improvements in the construction of permanent way, modes of attaching tyres by dovetailed clips, apparatus for heating the feed water of locomotive engines, and fireboxes for burning coal and coke together in locomotives; and upon the two latter subjects he communicated a paper to the Institution (see Proceedings Inst. M. E. 1854 page 24).

He subsequently brought out further improvements in the fireboxes .and other parts of locomotive engines, and also an oil axlebox for engines and carriages, and safety guide-rails to be used on sharp curves and bridges; several of his inventions have been extensively used on various railways.

In 1863 he designed and carried out the arrangement of new workshops and machinery for the locomotive and carriage departments of the London and South Western Railway at Nine Elms, London.

His death took place on 18th October 1871 in his sixty-fourth year, after an illness of about three weeks' duration.

He became a Member of the Institution in 1848.