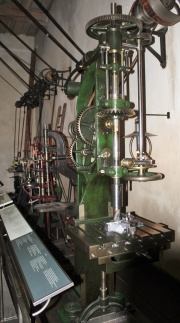 1870 Klett column drilling machine designed by Ludwig Werder, one of the founders of MAN, displayed at the Deutsches Museum

1852 re: the Kissingen artesian brine spring: '.....Three series of concentric tubes are sunk at various lengths into the bore, corresponding with the depths of saltwater strata to be dealt with. The largest, 5 inches in diameter, descends not lower than 330 feet, and serves to keep out all superficial waters of slender saline pretensions, as well as to maintain the sides of the bore or walls intact. The next concentric tube descends to 1740 feet, immersed in the water which lies over the rocksalt, and is 3 inches in diameter; while the third or innermost tube, 2 inches in diameter, descends to the depth of 1900 feet, immersed actually into the stratum of rocksalt. The united length of these tubes is 3970 feet. They are made of wrought plates of brass one-eighth of an inch thick, turned up, dovetailed at their edges, and soldered; and having been subjected to a pressure of 50 atmospheres perpendicularly, and to that of 10,000 lb. weight longitudinally, they have resisted both forces without giving way. These tubes were manufactured by Klett, of Nuremberg, and are very creditable to the state of industrial art in that part of Germany. They have cost 15,000 florins (1250/.)....'[2]

Klett & Co became one of the largest industrial companies in Bavaria. Theodor bought out the British partners, but Rye remained for several years to manage the foundry. Another British engineer who contributed to the early development of the company was Thomas Astbury, boilermaker.

1873 Theodor Klett converted the Company into the Maschinenbau Actien-Gesellschaft Nürnberg.

Note: The Wikipedia entry for Klett gives the name Wharton Rye, which is more likely than Wharter, and gives the towns of origin as Dundee for Earnshaw, Manchester for Rye, and Canterbury for Hooker.

It appears that Earnshaw came as an engineer, Hooker as a millwright, and Rye as an ironfounder.