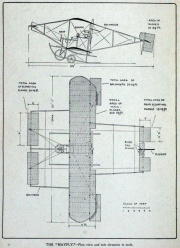 "The first decade of powered flight abounded with gay, dashing and oftimes downright eccentric personalities. Less well remembered than some of the pioneers, yet one of the most remarkable, was Lilian E. Bland. Far from the centres of aeronautical activity in England, she designed, built and successfully flew her own biplane at Carnmoney, Belfast, in 1909-11.

The adventures of this talented and resourceful aviatrix had for long intrigued the writer, but it had been difficult to obtain reliable details, especially as all trace of her seemed to have been lost after her emigration to Canada in 1912. Last summer Arthur L. Dawe of Montreal was asked to assist in the quest of finding her. Intensive and enthusiastic research by several people in the Vancouver area failed to bring anything to light until a letter in the Victoria, BC, Daily Colonist of November 6 brought word from the pioneer herself, now living in retirement in Cornwall, England, at the age of 85.

Lilian Bland's first few years in the present century were spent in riding, writing on sport for London papers and in establishing herself as a well-known press photographer. A friend, Miss Blackburn, used to land her by boat at dawn on an island off the West coast of Scotland, where she would remain all day exposing the first colour plates of birds. The sight of the gulls soaring overhead brought a longing to emulate them; and a postcard of Bleriot's monoplane, complete with its dimensions, sent from France by her Uncle Robert, fanned the spark to a flame.

Here was something that the energetic and versatile Miss Bland had not yet tackled — she would build her own aeroplane and teach herself to fly it. Her father had made his home with his sister; and Lilian Bland's uncle, the late General Smythe, had left a well equipped workshop in a back room, complete with bench and tools. After reading up all that had been accomplished by the Wright Brothers, she constructed a model biplane which flew with success as a kite.

Spurred on, the next step was to make a full-size glider with the intention, if it worked, of subsequently adding an engine. Miss Bland decided to base the wings on those of the gulls she had studied from her lonely island. She constructed them of spruce steamed to shape; spruce was also employed for struts, and bamboo for the outriggers, the joining being accomplished with bought sockets, wire and strainers. As the workshop was small, the components were made in sections and removed to the coach-house as they were finished. Strong fabric covered the flying surfaces, a coating of a photographic solution serving to render them waterproof. Spruce skids formed the landing gear.

Completing the 27ft 7in span biplane had taken some time but, early in 1910 (after it had been christened Mayfly, for the same reason of slight doubt about its flying ability as was felt about several other aircraft of the period) the gliding tests were started with the help of three men, two of whom knew little of what they were trying to do. The Mayfly soared well in the wind blowing up the face of Carnmoney Hill, with breakages and repairs taking place as the weak spots showed up.

Finally, to assess the weightlifting capacity of the glider, four stalwart 6ft members of the Royal Irish Constabulary were enlisted to hold on to the wings, together with Miss Bland's assistant, the garden boy Joe Blain. Even with this load attached, the Mayfly rose swiftly into the air and the surprised policemen, preferring solid earth beneath them, promptly let go and dropped off, leaving Joe to hang on and bring the machine out of wind.

Lilian Bland calculated in this rough and ready way that, if the Mayfly could lift five men, it would easily take an engine. A letter to Alliott Verdon-Roe in England to ask him if he could produce a light engine brought the reply that he was able to make a two-stroke air-cooled unit — an offer that was accepted with alacrity.

The engine was supposed to be ready in May 1910, but a delay ensued, and to hasten delivery Miss Bland crossed to England a month or so later. In a demonstration run for her benefit the horizontally opposed two-cylinder engine, which developed 20 h.p. at 1,000 r.p.m., started up with a roar and the propeller promptly flew into smithereens, fortunately missing the onlookers. A new 6ft 6in adjustable-pitch Avro propeller was supplied, and early in July Miss Bland took the engine back to Ireland — on two bearers in her railway compartment.

No time was lost in mounting the engine straightaway on a strongly built stand behind the canvas seat in the Mayfly and it was tested late at night and in pouring rain. The petrol tank was not yet ready; so, for this first try-out, a whisky bottle was used as a substitute — feeding the engine by way of Lilian Bland's deaf aunt's ear-trumpet.

Once the fuel tank was fitted testing began in earnest. The engine was not easy to start and, when it was running, the vibration snapped most of the wires between the struts and set the nuts dancing on their bolts. More adjusting and strengthening and the fitting of heavier wheels and tyres and the Mayfly was ready to try its wings.

The loan by Lord O'Neill of his park at Randalstown provided 800 acres but included the hazard of a loose bull — sufficient encouragement, Miss Bland thought, to make her fly at all costs.

When the weather was fine she used to cycle with Joe Blain twelve miles to the flying field to see if the machine would rise under its own power. It certainly did, but the experimenters were forced to wait impatiently for five weeks of bad weather to pass. Eventually, in August and September 1910, Lilian Bland was flying Ireland's first powered biplane, the machine taking off in about 30ft for its first hops and sailing slowly along in the air. The pilot could hardly believe that she had left the ground in it and ran back each time to see where the wheel tracks had petered out in the grass.

The hops lengthened until the Mayfly was happily flying short distances, heaving slightly up and down like a boat in motion. Among other modifications, protective canvas screens were added on each side of the seat and the vertical tail was altered in area, experiments continuing together with tests of a large model of a revised Mayfly glider.

But Miss Bland's excitement and enthusiasm at her success produced a completely opposite reaction in her father: he was greatly upset, and offered to buy her a motor-car if she would give up this unbecoming and dangerous business of flying. Knowing that the Mayfly was under-powered with its present 20 h.p. Avro and that a more powerful engine would wreck its superstructure, she felt that her aeroplane was more of a grasshopper than an aircraft which would go anywhere. Had it not been so she would certainly not have been bribed off; but, while gaining a lot of experience, she had practically built the machine twice over. Also, it was a costly hobby and professional constructors and flyers were now producing a number of increasingly successful aircraft.

She had proved her point and slapped in the eye all those who had laughed and said that a woman could not build an aeroplane. So it was goodbye to her beloved Mayfly; eventually the engine was sold and the airframe was given away as a glider to a boys' club.

Remarkable as it was, the rest of Lilian Bland's life story cannot be told in detail in these pages, for aeroplanes played no further part in it. Her father having bought her the promised car, she taught herself to drive, and before long was running a Ford agency in Belfast.

Family disapproval of such "unladylike" activities resulted in her accepting an offer of marriage from a cousin in Canada. Helping him to establish a farm on virgin land near Vancouver, her adventurous and inventive spirit found full scope.

She returned to England in 1935, to spend some years at Penshurst, Kent, before retiring to Cornwall in 1955."