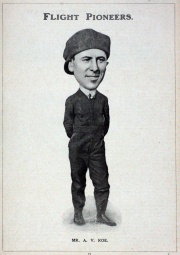 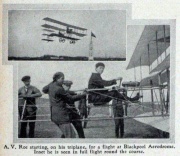 Educated at Shepperton and St Paul's

1891 Left home when he was 14 to go to Canada where he spent a year working odd jobs, including assisting with getting out the drawings for a flying machine.[2].

He was a fitter at Portsmouth dockyard and tried but failed to join the Royal Navy as an engineer.

1899 Started work for the British and South African Royal Mail Co as an engineer, joining the SS Inchanga as fifth engineer; he stayed until 1902. It was during this time that he first turned his mind to the possibility of actually building a flying machine.

When the Wright brothers had made the first flight in a heavier than air machine at Kittyhawk, he was almost immediately in correspondence with them. He cycled to Le Mans to meet them when they made their first European flights.

From 1903 he spent 3 years as a draughtsman in a motor works. Gradually he developed his interest in birds and in flight, and began to construct flying models

1907 Won a Daily Mail competition held at Alexandra Palace with a prize of £75 for one of his model designs (the first prize of £150 was not awarded), against fierce competition. With the prize money he was soon to build a full size aeroplane based on his winning model.

He applied for and took a job with the Royal Aero Club.

He then found a job in the U.S.A. with a firm trying to build a gyrocopter. The machine was a failure and Roe came back to Britain but not discouraged.

1908 June 8th. Flew his machine for 100 feet for the first time at Brooklands (then a motor racing track), powered by an Antoinette 24 h.p. engine on loan. This was the first British-designed and British-built aeroplane to fly under its own power.

He was forced to leave Brooklands so he moved to stables in Putney leant to him by his brother, Dr S. Verdon Roe, where he built a triplane powered by a 9 h.p. JAP engine.

1909 July 13th. Flew his 'Avroplane' triplane, taking off from Lea Marshes, Essex. Later attempts to build and fly his early aeroplanes were made at Walthamstow Marsh. Despite many failures, Roe continued his experiments and there is now a blue plaque commemorating his first successful flight there (in July 1909) on one of the railway arches where he worked.

1910 With another of his brothers, H. V. Roe, who was head of an engineering firm in Manchester, he founded A. V. Roe and Co. at Brownfield Mill, Manchester.

1910 August 20th. Married Mildred Elizabeth (1884-1965), daughter of Samuel Kirk, of Derby, with whom he had four sons and five daughters. Two of his sons were killed on operational flying duties in the Second World War. Later they made their home at Long Meadow, Rowlands Castle, Hampshire

1910 July Gained his flying certificate at Brooklands, the aircraft was a Roe Triplane.[3]

1910 Towards the end of the year he built a tractor biplane. This machine was soon after fitted with floats, the first English seaplane.

The new facilities brought dramatic results from Roe, who showed an astonishing instinct for the right proportion and shape of aeroplanes.

1911 Designed the first enclosed cabin aeroplane, which flew in 1912 and was entered in the British military trials that year. In October 1912 it established a British flying record of seven and a half hours.

1913 A. V. Roe built the first 504, his most successful model, using the tractor biplane format; this eventually sold more than 8,300 and became a basic trainer for the RAF up until 1932

1914 The Avro 504 was used as a bomber by the Royal Navy: three naval pilots carried out a raid on the Zeppelin sheds at Friedrichshafen on 21 November 1914, the first air raid in the history of warfare

1917 The 504 became the standard trainer for the Royal Flying Corps. For a quarter of a century, with very little change except for increased engine power, it was renowned for pilot training.

c.1928 Predicted that aircraft would be flying at over 1000 mph at heights of over 12 miles, with passengers in warm, pressurized cabins. He believed firmly that speeds would increase with height above the earth and the times of long journeys be reduced substantially.

1933 Changed his name to Verdon-Roe, in honour of his mother.

ON January 4, Sir Alliott Verdon-Roe died at the age of eighty.

Born at Patricroft in 1877, Edwin Alliott Verdon-Roe was educated at Saint Paul's School, and at the age of fourteen and a half travelled to British Columbia to learn surveying with a civil engineer.

On his return he spent five years as an apprentice in the locomotive works of the Lancashire and Yorkshire Railway, and subsequently sailed as an engineer for two years.

He then entered the motor industry as a draughtsman and designer. In the model aeroplane competition held by the Daily Mail in 1907, he received the highest prize a warded.

Verdon-Roe then built a full-size aeroplane with which he succeeded in making a flight at Brooklands in June, 1908. However, he shortly afterwards abandoned the pusher aircraft and constructed the famous tractor triplane, which was flown at Lea Marshes in 1909; from then on he held to the tractor principle, chiefly with biplanes, and saw it achieve preponderance in world aviation.

The first machine had both main and tail surfaces in the triplane configuration, but in 1911 he built a biplane which was followed, in the next year, by the Avro "504," with an 80 h.p. Gnome engine. This machine was developed with conspicuous success, remaining in service for over fifteen years and being followed by others with a family likeness.

In 1912 also he built a cabin monoplane and then a cabin biplane, which was the first enclosed aeroplane to fly. A series of biplanes with 50 h.p. Gnome engines were the first aeroplanes designed and built in this country to be delivered to the Army. Other Avro biplanes bombed the Zeppelin sheds at Friedrichshafen in 1914, and one brought down a Zeppelin in aerial combat.

During the first world war the "504," with 100 h.p. Gnome and other rotary engines, together with the "Gosport System" of flying instruction, satisfied an immense demand for pilot training, and, at least until instruction of crews for the second world war began in America, more pilots had been trained on Avros than any other machine.

Training aircraft did not occupy the firm of A. V. Roe and Co., Ltd. exclusively, however, and in 1915 there was designed a two-seater fighter with a performance outstanding at that time.

In 1916 the twin-engined Avro "Pike " was evolved for the Royal Naval Air Service, a three-seater with two free gun mountings which was described as a fighter-bomber, and more powerful versions were the first Avro models to carry the name "Manchester." The "Spider" single-seat fighter, described then as "wireless," was a strut-braced sesquiplane, with the cockpit in between the spars of the main plane.

In 1918, Verdon-Roe was appointed O.B.E., and in 1928 he was knighted. He sold his interest in the firm he and his brother had founded and associated himself with one of the few firms building flying boats for the Air Ministry, subsequently known as Saunders-Roe, Ltd. The Saro "Cloud" and "Cutty Sark" were amphibians but twin-engined flying boats, such as the "London," the wartime "Lerwick," and the "SR/A1" jet fighter, were the main product of the firm. The marine craft culminated w1th the great Princess flying boats that are still in existence.

One of Verdon-Roe's persistent interests was the application of aerodynamics to the motor-cycle, and in 1922 he produced a monocar, a single-track vehicle in which the rider had a bucket seat. The first model, with a Barr and Stroud sleeve-valve engine, had small outrigger wheels for stability at low speeds. These were discarded in the later "Uno," which had much larger wheels with the springing actually inside that at the front. More recently he modified a "LE" Velocette to an open-frame design, giving the rider much increased weather protection.

Another interest of his later years was monetary theory and the possibility of reform to reduce the burden of debt upon the economy and to establish the prerogative of the State over currency creation; he was a vice-president of the Economic Reform Institute.