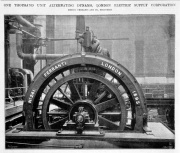 of 25A Cockspur Street, London, SW.

1885 Sir Coutts Lindsay installed electricity at his Grosvenor Gallery; as a result of demand from its neighbours an extensive system was installed which became London's first commercial electric power supplier.

By 1887 the London Electric Supply Corporation had been established by Sir Coutts Lindsay and his brother, Lord Wantage.

1887 From experience of his work at the Grosvenor Gallery, the London Electric Supply Corporation (LESCo) engaged Sebastian Ziani de Ferranti to design their power station at Deptford. He designed the building, the generating plant and the distribution system.

1889 One of the dynamos had blown up during the visit by the Board of Trade inspector conducting the enquiry into the future supply of electricity for lighting in London[3].

1891 On completion, the Deptford Generating Station was the first truly modern power station, supplying high-voltage (10kV) A.C. power that was then stepped down to 2.5kV at sub-stations and further stepped down to 50 or 100V for consumer use on each street. This basic system remains in use today around the world[4]. Ferranti's contract at Deptford was not renewed; Ferranti left LESCo.

1891 February. Supply of current from Deptford began; this was via the step-down sub-station at Grosvenor Station[5].

1891 The company would be using Mr Ferranti's system which was different from the accepted forms of electricity distribution but in the interim the company had been distributing electricity using the system developed for the Grosvenor Station; that station was due to be vacated in 1890 but the fire at the station brought an early end to its use. The company had laid mains at great expense from Deptford to the Grosvenor Station and had tested the supply of electricity from Deptford[6]

The company dispensed with Mr Ferranti's services - unfortunately for him there were no other British customers for his type of equipment.

1912 A correspondent to The Times identified the company's Deptford station as one of 6 which should be considered for bulk supply in an integrated London network; it generated 1 phase 83Hz and 3 phase 25Hz 10kV with AC distribution[8].

1913 Six London companies placed a large advert about potential uses of electricity in the home and office - in the drawing room, in the dining room, in the bedroom, for cooking and for vacuum cleaning[9]