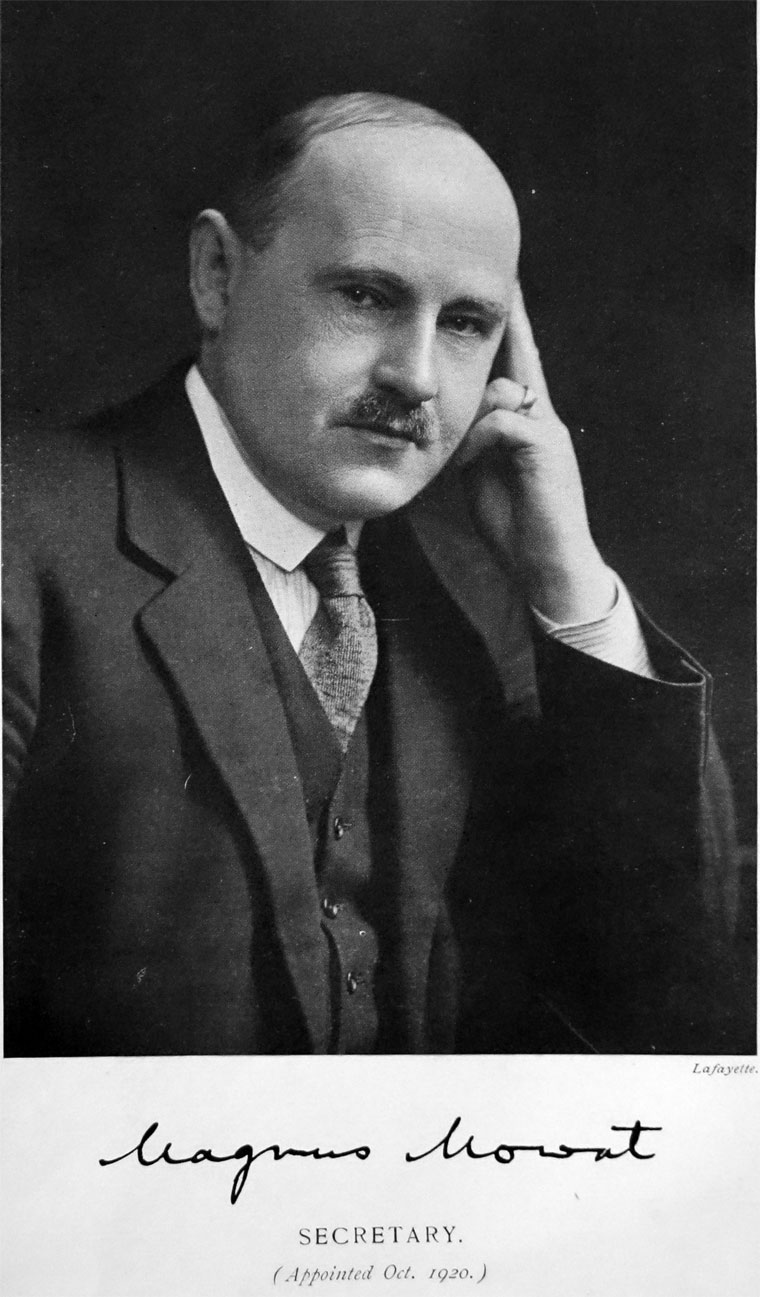 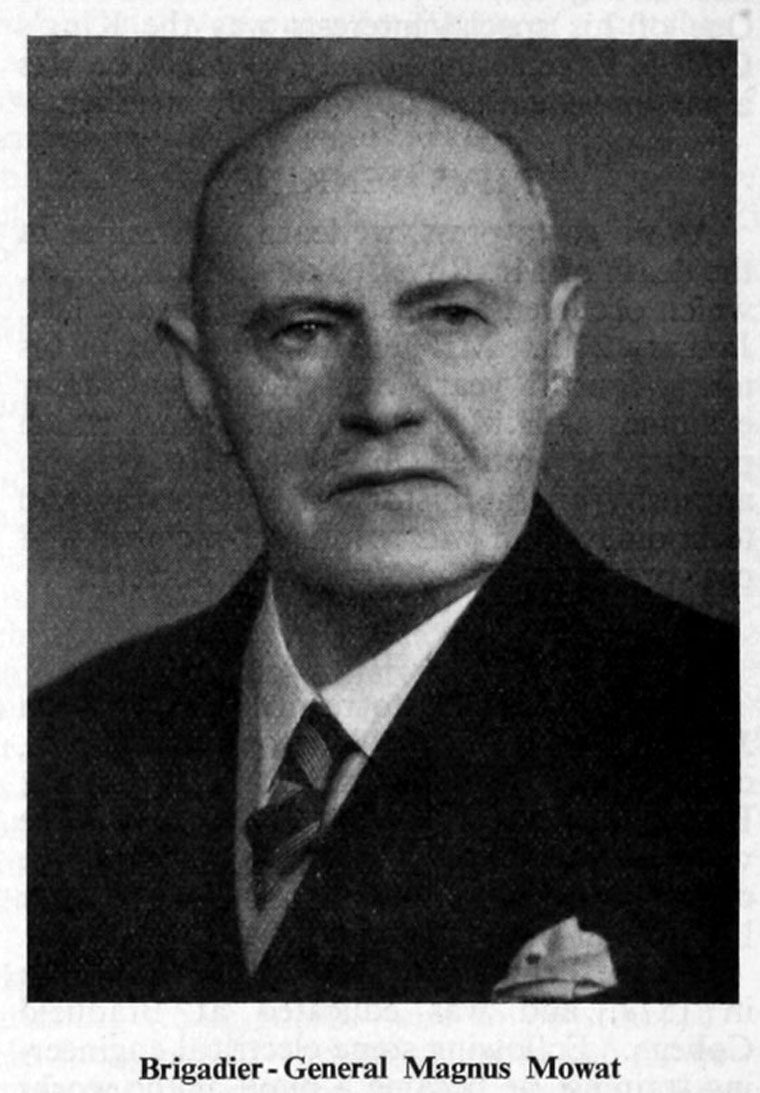 As briefly recorded in our last issue, the death occurred suddenly, on January 19th, of Brigadier-General Magnus Mowat, C.B.E., M.I.Mech.E., of Ebor House, East Sheen, S.W.l4. General Mowat, who was seventy-seven, was for eighteen years secretary to the Institution of Mechanical Engineers, and was well known not only to the members of that Institution, but also to many other engineers at home and abroad.

Magnus Mowat, who was born on November 10, 1875, was the son of the late Honourable Magnus Mowat. He was educated at Aberdeen Grammar School, Blackheath School, and King's College, London, and served an apprenticeship in the North British Railway Works at Cowlairs, under the late Mr. M. Holmes, the locomotive superintendent.

For a few years at the beginning of his professional career, General Mowat was engaged in railway work, first as an engineering assistant on the Leicester section of the Great Central Railway and subsequently, from 1899 to 1901, as assistant engineer on the Indian Midland (later G.I.P.) Railway.

He returned to this country in 1901 and took up an appointment, with Robert McAlpine and Sons, Ltd., as contractors' engineer on the Partick section of the Glasgow main drainage system.

A year later General Mowat became assistant engineer of the Millwall Dock Company, Ltd., and in 1905 he succeeded to the position of chief engineer and general manager of that company.

Subsequently, he had charge of the East and West India Docks and the Millwall section of the London Docks under the Port of London Authority.

During the first world war General Mowat commanded a division of the Royal Engineers for two years or so, and was then appointed Commands Road Officer and Director at the War Office. In recognition of his war services he was created C.B.E. in 1919.

In October, 1920, following the retirement of Mr. Edgar Worthington, General Mowat was appointed secretary of the Institution of Mechanical Engineers, an office which be very ably occupied for the next eighteen years. During those years the work of the Institution developed considerably in many directions. The number and the activity or its local branches increased, and in 1930 the Royal Charter of Incorporation was granted: By that time the membership of the Institution exceeded 10,000.

Following a serious illness in 1938, General Mowat felt obliged. to relinquish the secretaryship of the Institution, and as a mark of the esteem in which he was held by all grades of membership, the Council conferred upon him the title of honorary secretary.

During his years at Storey's Gate, General Mowat gave unstinted service to the "Mechanicals," of which he had become an associate member in 1902 and a member in 1905. He was also a member of the Institution of Civil Engineers, a member of the Institution of Engineers and Shipbuilders in Scotland, a Fellow of the Chartered Institute of Secretaries, and a Fellow of the Royal Society of Edinburgh.

To the end, General Mowat kept up an active interest in all matters concerned with the engineering profession, and in particular with engineering education. He was a member of the council of King's College, London, and of the councils of the Battersea Polytechnic and the Wandsworth Technical Institute. One of his special interests was the King's College Engineering Society, of which he was a past-president and honorary life member.

Brigadier-General MAGNUS MOWAT, C.B.E., T.D., who died on 19th January 1953, will be known to a wide circle of the more senior members of the Institution for his work as Secretary for nearly twenty years, and his passing will be noted by many with considerably more than ordinary regret.

He was born on 10th November 1875 and received his formal education at Blackheath School and Aberdeen Grammar School. After a period at King's College, London, where he studied under the Professor of Mechanical Engineering, D. S. Capper, he obtained the Diploma of Associateship, and entered on a two years' articled pupilage in the Cowlairs, Glasgow, works of the North British Railway Company.

At the completion of this practical mechanical course he accepted a post as civil engineering assistant on the extension to London of the Great Central Railway and was employed as resident on the Leicester section. He followed this experience by two years on the Indian Midland, later the Grand Indian Peninsular Railway, where at first he was the sub-divisional engineer in charge of the construction of 118 miles of railway between Bina and Sonagir in the North West Province, and later the resident in charge of 120 miles of new railway near Agra.

In 1901 he returned home to take up a post as contractor's engineer to Robert McAlpine and Sons, and was engaged for about a year on the Partick section of the main drainage system of the City of Glasgow when he resigned to become chief assistant to Mr. F. E. Duckham, the engineer and general manager of the Millwall (London) Dock Company. On the retirement of his chief, Mr. Mowat was appointed in his place and when the Port of London Authority was formed in 1909 to absorb all the London dock companies he was confirmed in his appointment and was also made engineer in charge of the East and West India Docks.

Mr. Mowat had been an officer in the Territorial Army since its formation about 1909 and at the commencement of the 1914-18 war he was immediately mobilized. He saw service in France in the infantry, the Royal Garrison Artillery, and the Royal Engineers and for two years commanded the Royal Engineers of a Division. However, his experience of both mechanical and civil engineering and his capacity for administration were not to remain unnoticed for long as he subsequently held a number of staff appointments, notably as Commandant of the School of Heavy Bridging and as Command Road Officer at the War Office. In connexion with the latter he was Deputy Chairman and Administrative Officer of the Joint Roads Committee at the end of the war and had risen to the rank of Major. For his services he was appointed a C.B.E. and had granted to him the honorary rank of Brigadier-General. Later, for his services in the Territorial Army, he was awarded the Territorial Decoration.

In 1920 he was appointed Secretary of the Institution. Members, especially the younger ones at that time, will recollect the ready help and advice he always gave particularly in the dark days of the industrial depression in 1926 and later. During his Secretaryship, the Institution advanced steadily in prestige through the increased scientific character of its papers, its active prosecution of researches, and its continued enhancement of the standards of engineering education, all of which were reflected by a steady, unspectacular, increase in membership during the period. To his ex-officio post of Honorary Secretary of the Benevolent Fund he brought also his untiring energies and freely gave his time to the personal investigation of the merits of many of the applications received by the Committee of the Fund for financial help. During the years of the depression the Committee had to deal with many pathetic cases of members in their prime and it was to the alleviation of these that he mostly devoted himself. Nor was he less assiduous in pressing the claims of the Fund itself for contributions from members.

In 1930 the Council took the important constitutional step of petitioning the Crown for a grant of a Royal Charter of Incorporation. During the drafting of the various documents, the Petition, the Charter and the By-laws, and in the many conferences necessitated by these, Brigadier-General Mowat showed throughout his far-sightedness and statesmanship by the wise and objective guidance which he gave to Council and members alike during complex negotiations. Perhaps his Highland Scottish ancestry, of which he was so proud, blessed him with unusual shrewdness and common sense and gave him, at times, an almost uncanny prescience. It was a matter of great regret to all who knew him that ill-health compelled his resignation in 1939 when many members will have felt that they were losing an old and sagacious friend and counsellor, and his staff a revered and kindly chief. The Council marked their appreciation of his services by designating him Secretary Emeritus, a title which he valued highly. This note would not be complete if reference were omitted to his main non-professional interest, that of youth clubs in the less wealthy parts of the Metropolis. To these he largely devoted what leisure his official commitments left him, to their great benefit. One of his interests, known only to a few, was that of history, English and particularly Scottish. He had a memory well stocked with facts and, in addition, a balanced, critical faculty which never failed to let him marshal facts into new and convincing perspectives. Brigadier-General Mowat was the author of several papers read before the Institution.

He was elected an Associate Member in 1902 and a Member in 1905. He was also a Member of the Institution of Civil Engineers, a Fellow of the Royal Society of Edinburgh, and a member of a number of Institutions in Great Britain and abroad. He was also a Liveryman of the Worshipful Company of Clockmakers and of the Worshipful Company of Founders in the City of London.

His death, in his seventy-eighth year, took place at his home at Sheen.