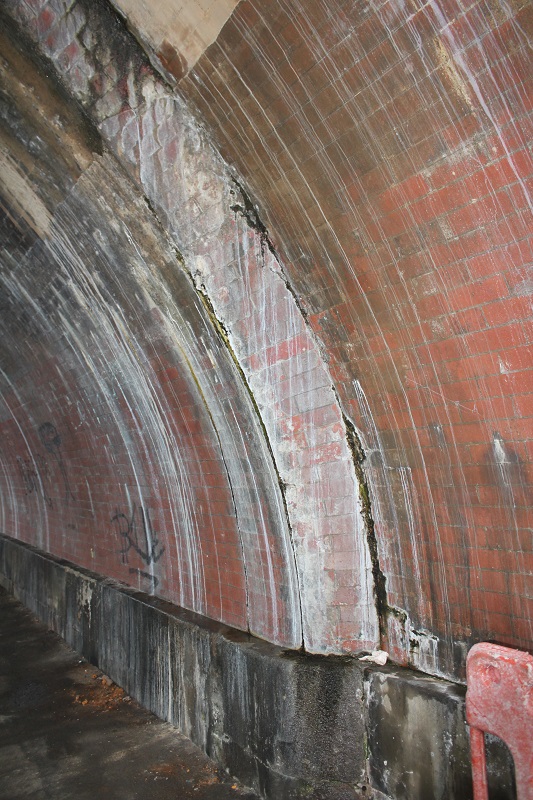 Maidenhead Railway Bridge (aka Maidenhead Viaduct) is a railway bridge built to carry the main line of the Great Western Railway over the River Thames between Maidenhead, Berkshire and Taplow, Buckinghamshire. It crosses the Thames on the reach between Bray Lock and Boulter's Lock

The bridge was designed by Isambard Kingdom Brunel, and it was completed in 1838, but not brought into use until 1 July 1839. The resident engineer was John Wallis Hammond, and the contractor was William Chadwick.

The Thames here is about 270ft. wide, with low banks, and in the middle is a shoal on which is founded the centre pier. Brunel intended to go down to the chalk, but borings proved that it was soft and overlaid by a bed of hard gravel conglomerate, and on this be built his piers. The main arches are flanked at each end by four semicircular flood arches, one of 21ft. span and three of 28ft. span.

The railway is carried across the river on two brick arches, which at the time of building were the widest and flattest masonry arches in the world. Each span is 128 feet, with a rise of only 24 ft 3in. The radius of curvature at the crowns of the main arches is 165ft., and the horizontal thrust at the keystones about 10 tons per square foot. Brunel first constructed landward flat arches. These he loaded with concrete. The centering of these was struck and an active thrust opposed to the main arches before their centres were struck.

The flatness of the semi-elliptical arches was necessary to avoid putting a "hump" in the bridge, which would have gone against Brunel's obsession with flat, gentle gradients (1 in 1,320 on this stretch).

Problems arose with the brickwork of the eastern arch during the construction period. The three lowest rings of brickwork began to settle, separating from the body of the arch. It is claimed that the timber centring for the arch had been eased prematurely by William Chadwick, before the mortar had adequately set, and that Chadwick accepted responsibility and took corrective action. It is stated that Brunel postponed repair of the brickwork until embankment work had been completed.

It has been claimed that the board of the Great Western Railway did not believe that the arches would stay up under the weight of the trains and ordered Brunel to leave the wooden centring (formwork) used to construct the arches in place. However, Brunel simply lowered the formwork slightly so that it had no structural effect, but appeared to be in place. Later, when the formwork was washed away in floods, but the bridge remained, the strength of the arches was accepted.

As built, Maidenhead Railway Bridge carried two lines of Brunel's broad gauge track. Prior to the final conversion to the standard rail gauge, during 1890-1892 the bridge was widened on each side in order to carry four standard gauge tracks. This work was supervised by Sir John Fowler, the width overall being increased from 30ft to 57ft 3in. The outward appearance remained almost unaltered.

Photo 8 above shows the distinctive chamfered step between the original Brunel arch and Fowler's additions. The reason for this transition is somewhat surprising. The original arch was built using 'London stock' bricks. The additional arches used red Cattybrook bricks. It was decided to additionally use these to encase the exposed original brickwork 'to secure uniformity of colour'.[1]

This drawing shows the arrangement one of the abutments. The abutments incorporate four arches with semi-circular tops. The piers of the two arches nearest to the river are joined by brickwork underground. As can be seen in the drawing, this brickwork has a 'sawtooth' form to resist the thrust of the arches.[2]

The Thames towpath passes under the right-hand arch (facing upstream), which is also known as the Sounding Arch, because of its spectacular echo.