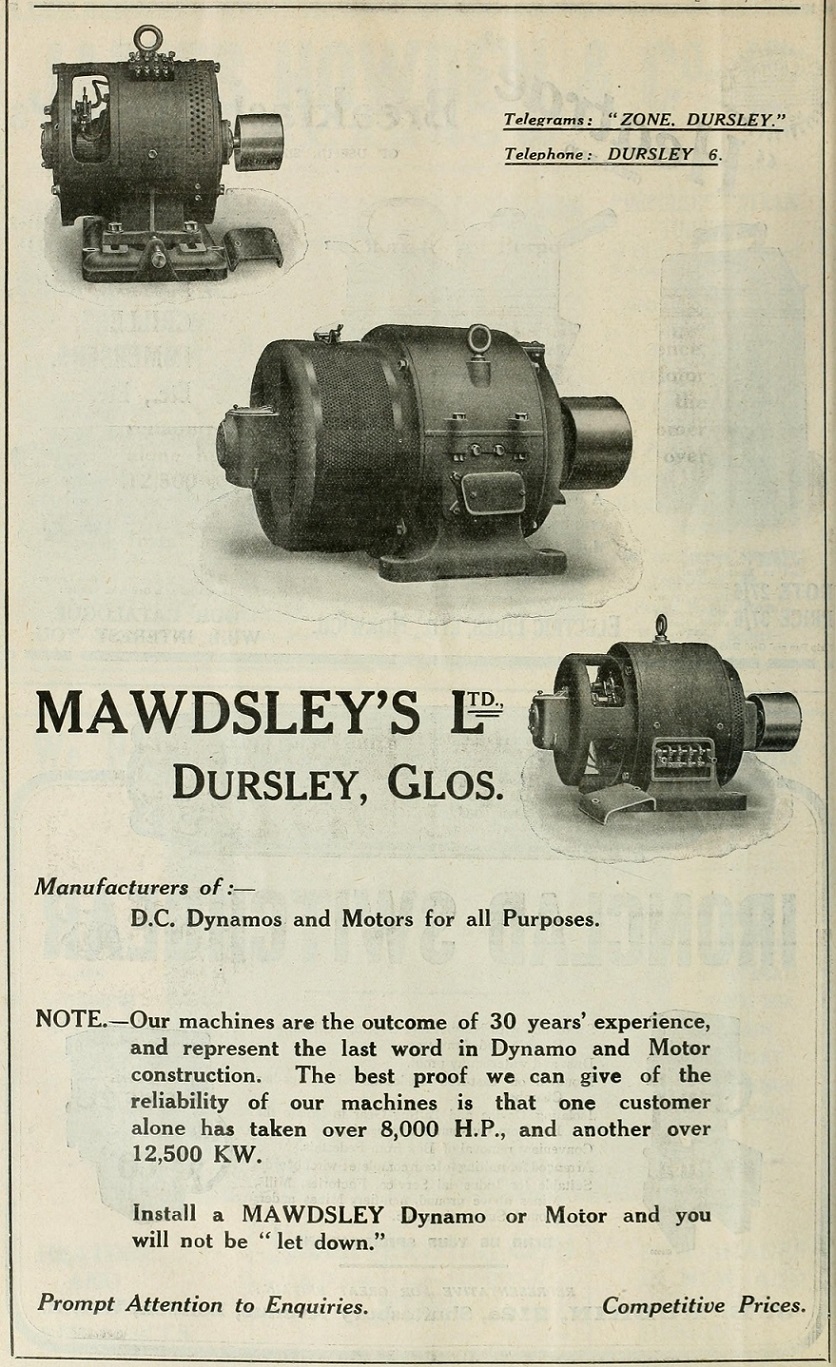 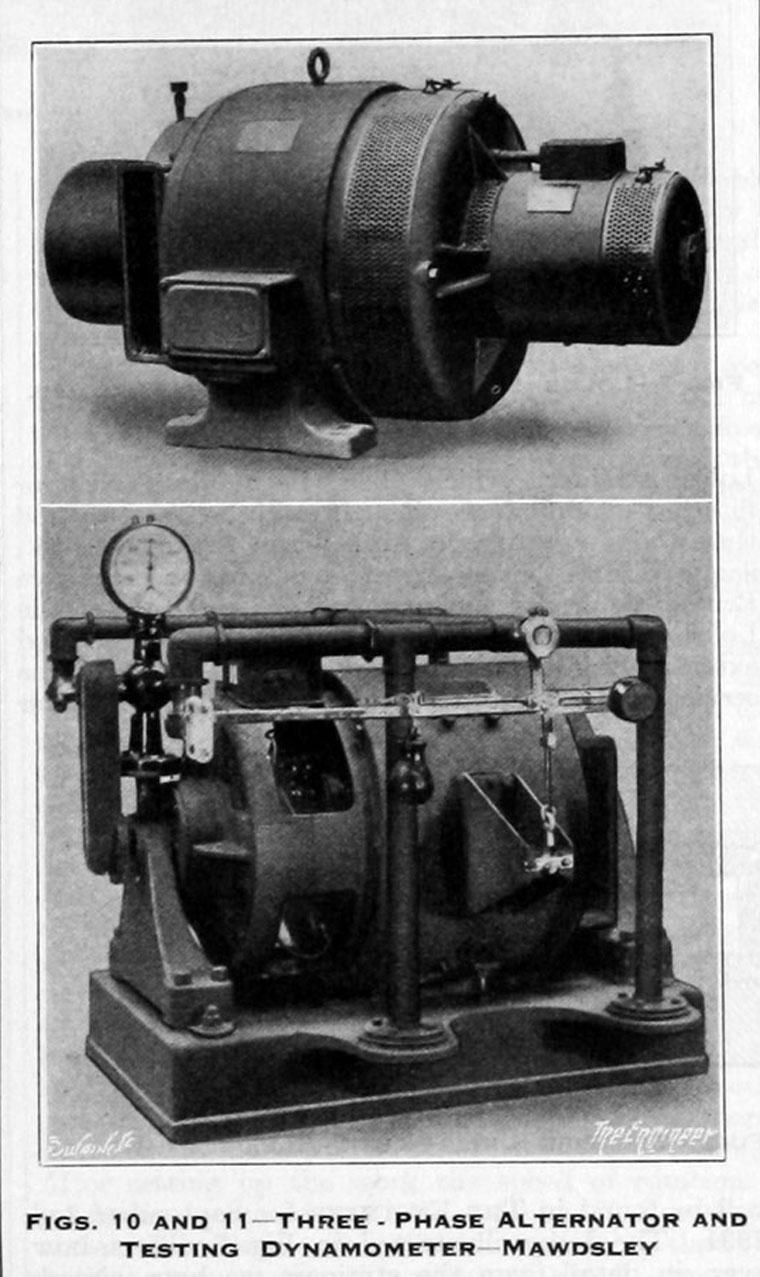 Generator on a showman's engine.

1783 The Rivers Mill, near the Uley Road, was originally established on the Caswell stream which fed into the River Cam and was used initially as a fulling mill. A fulling mill gets its name from the fullers earth which is mixed with damp wool and pounded to remove the natural greases. Subsequent to being a fulling mill, Rivers Mill was used as a paper mill and a wire mill and the factory attached to the mill was also used to produce an early type of un-headed pin and more latterly textile machines.

1903, after the death of William, the company was taken over by R. A. Lister, creating the Lister Electrical Machinery Co. This factory was later taken over by Mr Mawdsley when he arrived in Dursley.

1907 The Mawdsley Company was formed on January 23rd when John Herbert St. Hill Mawdsley took over the Rivers Mill. He promptly renamed the mill the "Zone Works" to commemorate the "Zone" patents he held on the design of a 2-pole DC motor. Mr Mawdsley originally lived at Rednock House, Dursley prior to moving to Barnwood in Gloucester, after which he travelled daily by car to the factory in Dursley.

Early Mawdsley's products included dynamos and DC motors which were manufactured with a large cast-iron content and were consequently very heavy. During the First World War, Mawdsley's supplied torpedo motors to the Admiralty and this was followed after the war by dynamos for use on showmen's traction engines which were driven by a belt from the flywheel.

These early Mawdsley's products were fairly innovative and the company-held records for the highest speed DC motor, the lightest weight DC motor and the lightest weight dynamo. However the company also produced arc-welding sets which were some of the best on the market. All goods were transported to and from Dursley Station by a horse-drawn dray from where they were taken all over the country.

1930s The company grew rapidly under Mr Mawdsley's direction until the depression hit in the 1930's.

1934 Thereafter trading became difficult and Mr Mawdsley retired in 1934 and was replaced by Mr A. H. Topham when the company was taken over by the Southern Areas Electric Corporation Ltd. From then on the product portfolio was broadened, particularly in the marine field.

WWII During the Second World War Mawdsley's supplied 15,000 searchlight generators to R. A. Lister and Co together with alternators for mobile radar supplies and mobile lighting plants. It was during this period that factory expansion took place on a large scale to allow the company to take on an increasing amount of specialised work, most notably that concerned with the degaussing of ships.

1953 After the war, in 1953, the new components shop was built and this was followed in 1957 by a rebuild of the armature shop. These two main shops were joined by a building containing the boiler house, pattern shop, stores and a garage. It was also in this period when the company broke into the machine tool market as well as the geared motor and conveyor markets. During the early 1960's the range expanded further to include "Mawdomatic" equipment for dockside cranes, variable speed alternator drives and "Syncage" AC motors. The company also found opportunities in the educational field and produced generalised machines and student's demonstration sets which were used in universities and colleges all over the world.

1961 An Electronics Division was formed in 1961 and its activities included the manufacture of flowmeters, control engineering systems for industrial drives and "Mawdaspeed" air-cooled eddy current couplings. In 1963 the company became part of the Adwest group which allowed it to be more competitive in the market.

1970, the "Mawdostat" Thyristor drive was marketed which was used in many applications including precision balancing, wire and tube drawing, rolling mills, textile machinery and gear box test rigs. From 1973, there was a shift in the way the company worked. Prior to this time, most drives were custom designed but it became evident that to be competitive in an increasingly international market it was necessary to produce a range of products which could be made to standard designs. The other benefits would be that manufacturing costs and delivery times would be reduced and with this in mind the "Matador" Packaged Thyristor Drive Systems were introduced and became a good seller.

1977, in the year of the Queen's Silver Jubilee and the company's 70th anniversary, an open day was held which attracted around 2000 people who were able to tour the works and take part in a wide range of celebrations. The main attraction was a 1925 traction engine "Lord Nelson" resplendent with a Mawdsley's generator mounted on the front.

1980 Market conditions started to worsen in 1980 and the company's activities began to be restricted although a wide variety of products were still supplied to the BBC, Bulmers the cider makers, the Inland Revenue, the Bank of England and the Capetown Table Mountain Cable Car amongst many others. It was after this time that attempts were also made to expand the range of overseas operations.

From 1987, trade conditions slowed again and the company was forced to make changes to the way it operated. This culminated in 1997 with a management buyout and a new strategic plan for the future.

2000 In June Mawdsley's finally relocated from Dursley to a new purpose built factory on the Waterwells Business Park near Gloucester and shortly afterwards the buildings were all demolished in readiness for construction of the Cotswold View residential estate. Thus ended a 93 year period of association with the town.