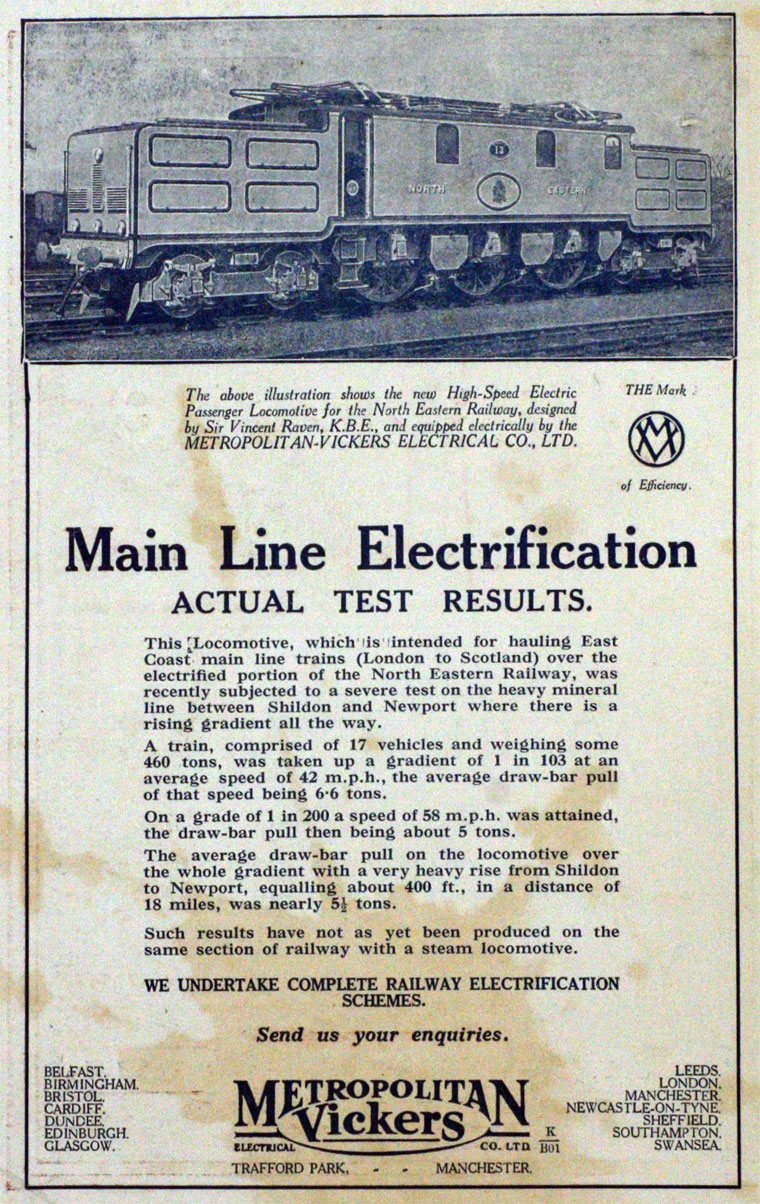 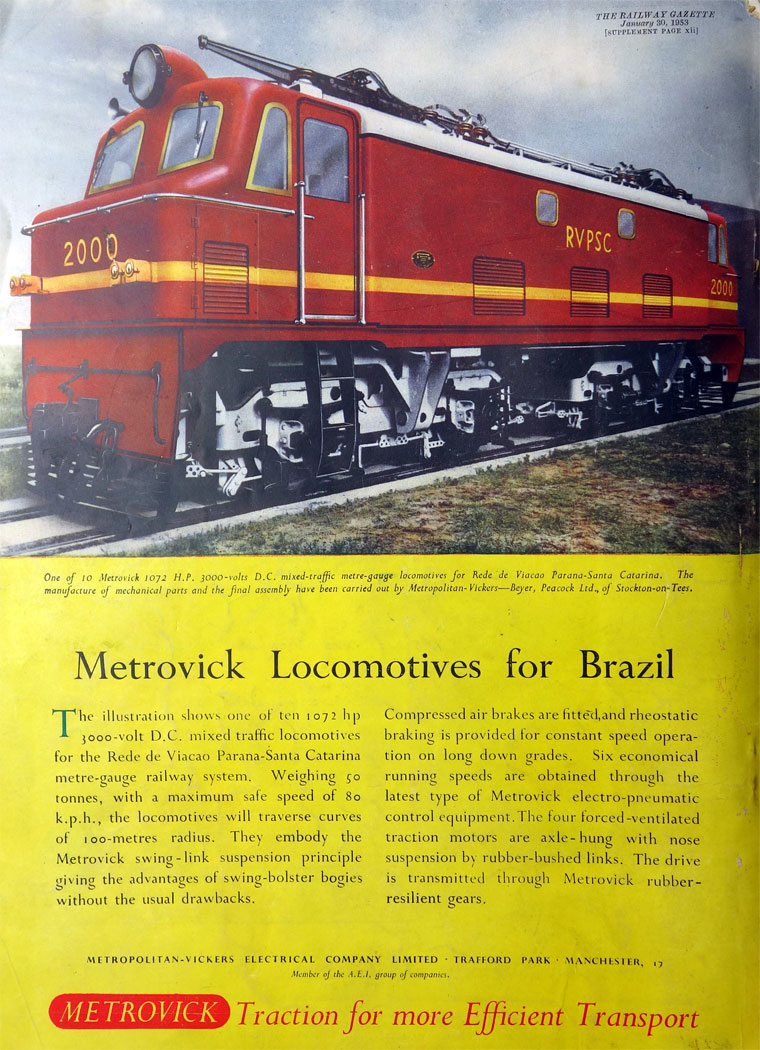 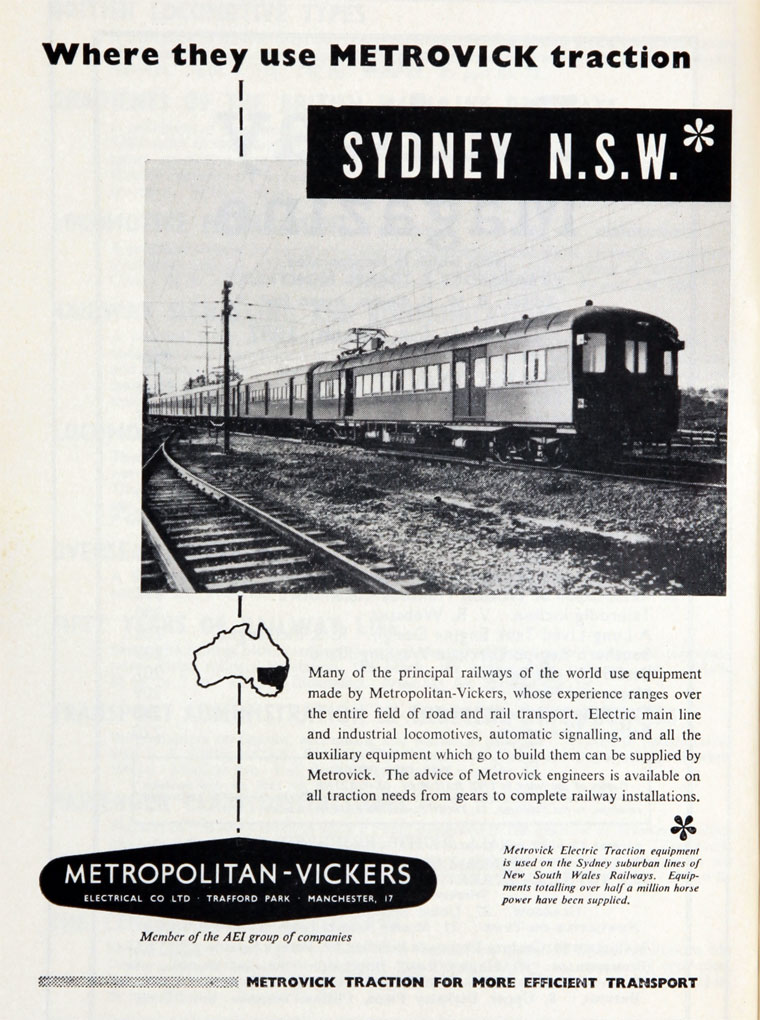 Following the success of British Westinghouse in developing its business in electric traction for railways, the company formed a separate traction department.

c.1914 Supplied traction equipment to London and South Western Railway for its electrification.

Post-WWI Following the success of the North Eastern Railway's Shildon-Newport electrification scheme, Vincent Raven planned the electrification of the main line from York to Newcastle, also at 1,500 volts DC using an overhead system of conductors.

1922 Metrovick supplied the NER with the electrical equipment for a prototype passenger locomotive that was built at Darlington for service on the North Eastern mainline. This locomotive, No. 13, was a new design of 1,800 horsepower (1,300 kW) and had a 2-Co-2 wheel arrangement. Although successfully tested between Newport and Shildon using the overhead power supply, No. 13 was destined to be unlucky as it never did the job for which it was designed. The reorganisation of Britain's railways in 1923 led to the abandonment of the electrification plans by the successor company, the LNER.

1922 78 locomotives were ordered for the Natal electrification of the South African Railways.

1923 Attercliffe was made into a self-contained traction motor factory with its own engineering department and the manufacture of complete locomotives and electric delivery vehicles.

1939 Electrical equipment for 70 EM1 mixed traffic locomotives for the Manchester Sheffield and Wath line was ordered by the LNER from Metropolitan Vickers Electrical Co with final assembly to take place at Doncaster Works. The 1500V DC electrification scheme was halted in 1939, and the initial order was reduced to one prototype[1].

WWII the Works suffered bomb damage. It became the major supplier of dc generator/ high frequency alternator sets for aircraft; a "shadow" factory was set up at Bamford. Together, 140000 sets were produced. Military work continued at the factory up to the 1970s.

1946 A prototype main line gas turbine-electric locomotive, 18100, was ordered by the Great Western Railway[2] but construction was delayed due the after effects of WWII. It was finally constructed for British Railways in 1951 by Metropolitan-Vickers, Manchester - see Metropolitan-Vickers: Gas Turbines. This locomotive spent its working life on the Western Region of British Railways, operating express passenger services from Paddington station, London.[3]

1948 57 examples of an improved design for the EM1 were ordered from Gorton Works entering service between October 1950 and August 1953. Mechanical parts and final completion was performed at Gorton, but the electrical equipment and traction motors were fitted at Metropolitan Vickers Dukinfield.

1949 A joint venture company, Metropolitan-Vickers-Beyer-Peacock, was formed with Beyer, Peacock and Co[4] to design, manufacture and assemble railway locomotives other than steam. New factory at Bowesfield, Stockton-on-Tees.

1953 Seven EM2 express passenger locomotives were built the Manchester Sheffield and Wath line with bodies similar to those of the existing EM1s, but stretched to accommodate a Co-Co chassis. Bodies, bogies, and mechanical parts were assembled at Gorton, and then sent to Metropolitan Vickers at Dukinfield for traction motors and electrical equipment to be fitted.[5]

1956 Attercliffe Works became the feeder department for the new AEI factory on Greenland Road, Sheffield for the manufacture of smaller machines and traction gears.

1958 Metrovicks also entered the the diesel-electric locomotive market, combining Metrovick generators with third-party diesel engines to develop the type 2 Co-Bo loco for British Railways. This diesel-electric locomotive was unusual on two counts: its Co-Bo wheel arrangement and its Crossley 2-Stroke diesel engine. The twenty strong fleet saw service between Scotland and England before being deemed unsuccessful and withdrawn towards the end of the 1960s.

1959 AEI created a subsidiary called AEI Traction Ltd which took over the Attercliffe Common works to manufacture traction motors, generators, gears and other machines such as motor-generator sets used for converting the high traction voltage to a safer voltage suitable for train lighting, heating, battery-charging and for the control equipment on locomotives and suburban electric trains.

After the take over by GEC, Attercliffe Works became part of GEC Traction Ltd who designed and manufactured a full range of traction machines and control equipment for electric vehicles.