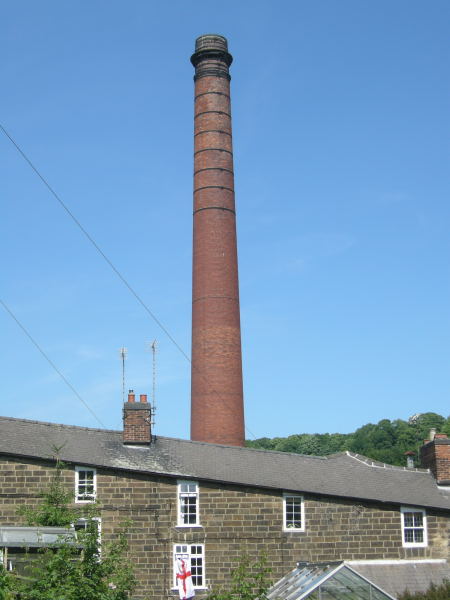 at Milford, on the A6 between Duffield and Belper, north of Derby

Established in the late 18th century by Jedediah Strutt and developed by William Strutt. The Strutts were very forward-thinking, and in 1826 William Strutt built a suspension bridge across the River Derwent immediately downstream of the mill complex.[1]

The mill was powered by four large diameter waterwheels, with widths from 18 to 20 ft, rotating at just 4 rpm. [2]

Photo 1, from a local display board, shows part of the mill complex. Those buildings have been demolished, but the large cast iron weir remains.

The low building, 130 ft long, might appear mundane, but in fact it is remarkable considering its date: 1817. It was built as a water-powered workshop, and had an unusual amount of natural light from the skylights and large side windows. Similar cast iron window frames can still be seen in surviving buildings (see Photos 2 and 3). Some of the cast iron roof beams, dated 1817, were rescued and are incorporated in the rebuilt workshop at Wortley Top Forge.

The Milford workshop contained at least three advanced machine tools made by Fox of Derby, and these were donated by the mill's owners, English Sewing Cotton Co, to the Science Museum. One of the lathes is installed at Wortley Top Forge, while a larger lathe and a planing machine are stored in the Birmingham Museums reserve collection. Another machine tool, maker unknown, was donated to the London Science Museum, but is not on display. It was an unusual combination of a slotting machine and a drilling machine. It has a central circular column which is connected to the iron roof structure.

Photo 5: The appearance of this structure, and its location by the main A6 road, might suggest a bus stop, but the cast iron columns bear the date 1832!