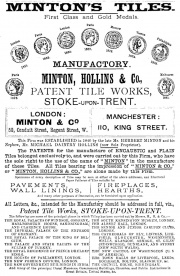 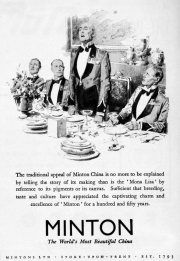 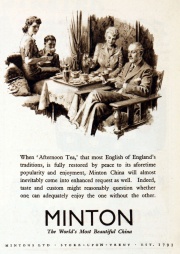 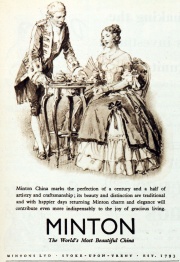 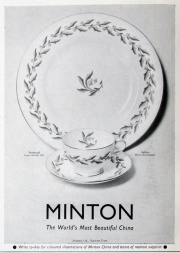 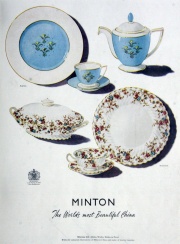 1798 The first products of the Minton factory were blue transfer-printed wares, but, in 1798, bone china (porcelain containing bone ash) was introduced, with considerable success. His products were mostly standard domestic tableware in blue transfer printed or painted earthenware and china, including the ever popular Willow pattern.

During the 19th century, the Minton factory was the most popular supply source of dinnerware made to order for embassies and for heads of state.

Until 1836, when Thomas Minton died and his son Herbert took over the business, the factory's staple products consisted of useful and unpretentious tablewares in painted or printed earthenware or bone china, following the typical shapes and decorative patterns of the period; figures and ornamental porcelains were made increasingly from the 1820s. Herbert is credited with enhancing the company reputation by enlisting the services of artists and skilled artisans.

1840s Hard white unglazed "statuary porcelain", later called Parian ware due to its resemblance to Parian marble, was first introduced by Spode. It was further developed by Minton, who employed famous sculptors to produce figures for reproduction.

1840 Herbert Minton entered into partnership with his nephew Michael Daintry Hollins and formed the tile making firm of Minton, Hollins and Co, which was at the forefront of a large newly developing market as suppliers of durable decorative finishes for walls and floors in churches, public buildings, grand palaces and simple domestic houses. The firm exhibited widely at trade exhibitions throughout the world.

In 1849, Minton engaged a young French ceramic artist, Léon Arnoux, as art director and he remained with the Minton Company until 1892. This and other enterprising appointments enabled the company to widen its product ranges, one of the first innovations being the very colourful and highly successful Majolica ware launched at The Great Exhibition of 1851.

1858 On his death, Herbert Minton was succeeded by his equally dynamic nephew Colin Minton Campbell who took the company into a highly successful exploration of Chinese cloisonné enamels, Japanese lacquer and Turkish pottery.

1868 Partnership dissolved. '...the Partnership heretofore subsisting between the undersigned, Michael Daintry Hollins and Colin Minton Campbell, carrying on business at Stoke-upon-Trent, in the county of Stafford, as Manufacturers of China and Earthenware, under the firm and style of Minton and Co., has been dissolved...'[1]

1870 The Franco-Prussian War gave Arnoux the opportunity to recruit the modeller Marc-Louis Solon who had developed the technique of pâte-sur-pâte at Sèvres, and brought it with him to Minton. In this process, the design is built up in relief with layers of liquid slip, with each layer being allowed to dry before the next is applied. Solon and his apprentices modelled maidens and cherubs on plaques and vases and became the unrivalled leaders in this field.

In 1870, Mintons opened an art pottery studio in Kensington, London, and encouraged both amateur and professional artists to become involved in pottery decoration and design.

1875 When the studio was destroyed by fire, it was not rebuilt.

From 1902, Mintons contributed to the Art Nouveau scene with a fine range of slip-trailed majolica.

Post-WWII. The Minton factory in the centre of Stoke was rebuilt and modernised after the Second World War by a great-great-great grandson of Thomas Minton. The tableware division was always the mainstay of Minton's fortunes.

1968 The company became part of the Royal Doulton Group.

By the 1980s, Mintons was only producing a few different shapes but still employed highly skilled decorators.

The factory, including office accommodation and a Minton Museum, was recently demolished as part of rationalisation within the Royal Doulton group.

Specialized bone china tableware continues to be produced by Royal Doulton under the Minton name.

1996 The trademarks of the company are registered in forty countries and the company sales figure at this time was £6.3 million.

Prosser The Engineer: "A Forgotten Birmingham Genius" - Richard Prosser's life and work is being studied in depth by Susan Darby, and a wealth of information has been made available online. The instalment of his biography 'The Dust-Pressed Process: The Button Wars and The Tile Revolution' covers information concerning Mintons and Michael Daintry Hollins.

A model of Herbert Minton's kiln for porcelain production (Four à porcelaine système Minton) is in the collection of the Musée des arts et métiers. The model was made by Jules Digeon et Fils aîné. Photograph and description here.