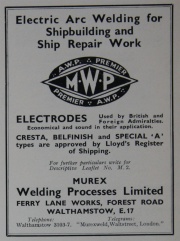 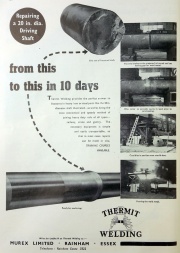 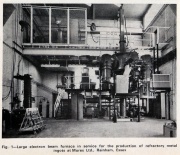 1918 The company manufactured tungsten from Wolfram ores made available by the Ministry of Munitions; premises had been acquired in Essex[2] (Rainham)

1929 Acquired the goodwill, patents and trademarks of Thermit Ltd, a company which was owned by ICI[4]; acquired Pure Metal Manufacturing Co Ltd[5]

1930 Acquired from ICI 91.77 percent of the share capital of Premier Electric Welding Co and the 75 percent it owned of a subsidiary electric welding company[6]

1933 Several additions to the business had been made at Rainham; the separations business continued satisfactorily; demand for the manufactured alloys had improved[8]

1934 Manufacturer of tungsten powder and alloy, iron founder and owner of an electric welding business; owner of patent rights for ore separation and concentration[9]

1935 In conjunction with Johnson, Matthey and Co, which controlled some fabrication patents, the company formed 2 new companies for production and fabrication of magnesium alloys - Magnesium Metal and Alloys Ltd and Magnesium Castings and Products Ltd[11]

1946 Premises were at Rainham and Waltham Cross; the company withdfrew from magnesium-related business[14]

1948 Began production of tungsten carbide mining bits at a subsidiary in South Africa; continued R&D at Rainham and Waltham Cross[15]

By 1951 the Powder Metallurgy Division was in Rainham (see adverts)

1955 Withdrew from the copper refining activity because it was unprofitable but continued with ferro-chrome despite low prices[18]. A pilot plant for extraction and fabrication of Zirconium metal was established with an eye on the developing interest in atomic energy[19]