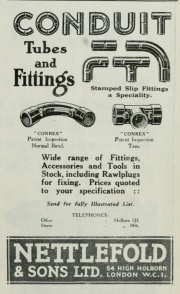 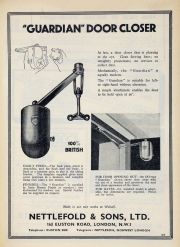 1823 John Sutton Nettlefold opened a hardware store at 54 High Holborn, London. He acquired from John Gilbert, who was a mechanical watchmaker of St. Marylebone, the patent which he had taken out for "certain improvements in the method or methods of making screws of iron, brass, steel, or other metals for the use of all kinds of woodwork".

1826 Nettlefold set up a workshop to make wood-screws in Sunbury-on-Thames. The Sunbury factory was powered by a waterwheel.

1854 Nettlefold spotted an opportunity to purchase a licence to a U.S. patent for manufacture of a novel wood screw. with a pointed end, acting as its own gimlet The licence, and the establishment of a new factory, demanded an investment of £30,000. Nettlefold sought and obtained the involvement of his brother-in-law as equal partner for an investment of £10,000 and the two established a factory in Heath Street, Smethwick, delegating its management to their sons, Edward, and Joseph, and the junior Joseph Chamberlain. The partnership was Nettlefold and Chamberlain with the two Nettlefolds and the two Chamberlains sharing responsibilities in the manufacturing business[1].

1880 Nettlefolds was launched as a limited company [2].

1905 The partnership between F. Nettlefold, A. Steer and O. Nettlefold "under the style of Nettlefold and Sons, High Holborn, W.C.", was dissolved[3]. This presumably means that the shop in London was kept out of the Limited company when it was formed and hence was not taken over by Guest, Keen and Co.

1947/8 The shop was finally sold to GKN by his children Hugh and Lucy (Nancy) Nettlefold, after its removal to new customised premises in Marylebone.

c.1951 Merged with Moser's Ltd., another subsidiary of GKN, from which time the firms have been known as Nettlefold and Moser.

The following contribution from KIC on 19 March 2012:

John Sutton Nettlefold, of The Grove, Highgate, Middx, and 54, High Holborn, London, founder of the firms of J. S. Nettlefold and Sons, and Nettlefold and Chamberlain (later Nettlefolds Ltd), of London and Birmingham, married Martha Chamberlain daughter of Joseph Chamberlain, they had three sons, Edward John, Joseph Henry and Frederick of the Nettlefolds of Nether Lypiatt, and five daughters. There is no notice of any of his daughters joining the family businesses.

"...Early in life John Sutton Nettlefold bought a brass founders and general ironmongery business, which (in 1826) he operated under his own name at 8, Red Lion Street, Holborn, and subsequently expanded and moved to 54, High Holborn. In 1851, automatic machines for making screws, invented in America, were shewn at the Great Exhibition, and, seeing an opening for a progressive screw-manufacturing business under these new conditions, Nettlefold, in partnership with his brother-in-law, Joseph Chamberlain (II), a whole-sale bootmaker, sometime Master of The Cordwainers' Company, decided to establish works in Birmingham. This was done in 1854, in the name of Messrs. Nettlefold and Chamberlain. In his hands and those of his sons, and greatly assisted by the driving commercial ability of their cousin, Joseph Chamberlain (III), later to be a famous statesman, the venture prospered exceedingly, and further works were acquired in Smethwick and Wolverhampton. In 1874, Chamberlain sold out his interest to the Nettlefolds for upwards of £120,000. On 30th April, 1880, the Nettlefolds having bought the businesses of the Birmingham Screw Company, Ltd., the Manchester Screw Company, Ltd., Lloyd Harrison, and combined the whole issuein a new joint stock company by the name of Nettlefolds Ltd, “Screw- makers, iron masters, and wire drawers." J. S. Nettlefold and Sons, "Wholesale and export ironmongers, patent screw, lock, and lawn-mower manufacturers," still continued. On 31 Oct. 1901, the undertakings of Nettlefolds Limited were incorporated with those of Messrs. Guest, Keen and Company (who represented an amalgamation, in the previous year, of The Patent Nut and Bolt Company, Ltd., and the South Wales works and colliers of Lord Wimborne), and the combined firms then became known as Guest Keen and Nettlefolds, Limited.” (Quoted ad verbatim from:- "The Nettlefolds" a book compiled from Public and Private records by C. Anthony Crofton. Anno Domini MDCCCCixii .)

Edward John Nettlefold was John Sutton Nettlefold's eldest son and heir, he was Chairman of Messrs, Nettlefold and Chamberlain and J. S. Nettlefold and Sons. He left six sons and eight daughters; most of his surviving sons, served at the family businesses, as listed below.

3. Oswald remained in London as managing director of J. S. Nettlefold and Sons, of 54, High Holborn. He also held the positions of JP (1915) in the county of London, and warden of the Leathersellers Company, 1917–18. He was succeeded by a son and two daughters.

"...Nancy, and her brother, Hugh, were the last Nettlefold managing directors of J. S. Nettlefold and Sons, Ltd., removed by them, in about 1927, from 54, High Holborn, to Euston Road, London.

In 1946 the company was bought from their hands, by Guest, Keen and Nettlefolds, Ltd., and subsequently, in about 1951, became merged with, Mozer's Ltd., a further subsidiary of G. K. N.'s, from which time the firms have been known as Nettlefold and Mozer" (quoted ad verbatim from :- "The Nettlefolds" compiled from public and private records by C. Anthony Crofton Anno Domini MDCCClxii.)

2. Joseph Henry, the second son of John Sutton Nettlefold of Highgate and Holborn, who became Chairman of Nettlefolds, Ltd., 1880 – 1881, was succeeded by three daughters.

3. Frederick was the third son of John Sutton Nettlefold, of Highgate and Holborn. In 1851, at the age of 18, he joined his father's business; three years later upon the formation of Nettlefold and Chamberlain. In 1874 Chamberlain retired and Frederick took over the greater part of the business and after the formation of Nettlefolds Ltd, in 1880, was chairman for several years. From about 1890, however he took an ever increasing interest in the silk manufacturing company firm of Samuel Courtauld and Company, this connexion was originated in the fact that his wife's mother was both cousin and sister-in-law of the founder, Samuel Courtauld.

This text has been lifted from the quoted book, The Nettlefolds, from a genealogical study, however in a book on L. F. Nettlefold OBE, published after her death by her sister Joyce Newton Thompson, in South Africa, the sale of J. S. Nettlefold and Sons and indeed its remove to Euston Road were more involved, as a lot of the responsibility for the firm had devolved to Lucy, always known as Nancy because of the war injuries of her brother Hugh, who despite that served in two world wars, but which left him with a very less than robust constitution.

Joyce and Nancy were both suffragettes, both went to University and Nancy held two Law degrees, the first from London the second from Cambridge, she was subsequently one of the first women, to whom Cambridge University, post study, granted their formal Law qualifications., member of the LCC and Marylebone

So from Aderne Tredgold's book entitled, Lucy Frances Nettlefold, I shall find some illuminating quotes on J. S. Nettlefold and Sons (maybe sons and great granddaughter would be appropriate)

Miss Nettlefold of London Chapter page 14.
1919
"But Nancy was never to benefit directly from this victory which she had helped win. Soon after she returned to England she was faced with a decision that led to a vital turning point in her life. Her father's health was not good and she was asked to join the family firm. She was to begin a Director and Company Secretary.

Things were not going very well in the firm and in the rambling, unplanned old building in Holborn it was not easy to organize the business efficiently....She joined Nettlefolds in 1920 when she was 28....

...One of the first major problems that presented itself was that of the building in Holborn from which Nettlefold and Sons had been conducted for 100 years... Could they run the risk losing something of that tangible asset, a familiar name in a familiar place...

"I confess I am frankly terrified at the prospect of having to handle the job without being in a position to make a clean job of it,” she wrote to her sister. “You see, it isn't only a question of the big financial business and of the plans and details of the building and the moving, but, connected up with the move, there must be an absolute and complete reorganization of all the internal methods of this place from top to bottom."...

In 1923 Nettlefold and Sons, wholesale ironmongers of 54 High Holborn, celebrated it's centenary...a dinner at The Connaught Rooms, Miss L F Nettlefold and Mr Hugh Nettlefold, who had also joined the firm, represented the fourth generation of the family in the business.... Mr Oswald Nettlefold mentioned that one reason why the firm had “got along well was that there had always been confidence between employers and employed.”

The full responsibility for running the business then fell on the shoulders of Nancy and her brother Hugh, as Joint Managing Directors. Nancy's sphere included the accounts, travellers and the purchase and sale of screws, bolts and nuts.

After much discussion it was decided at length that the old Holborn building, which had become quite inadequate for the ever growing volume of business of the firm, should be abandoned and an altogether and an altogether new building erected.. The site that was found for it was in Euston Road, opposite Euston Station.

...On September 17th 1928, Nettlefold House (Euston Road) opened its doors to its customers and the first one was received at 8.30 a.m by Mr Hugh Nettlefold....

...a photograph of the new showroom taken at the time, with its glass cases, carpets, comfortable chairs and the latest steel shelving, looks rather more like that of a jewellers shop, than of a hardware emporium...."acme of modern business organisation" the showrooms of "great artistic merit"...

... On the panelled walls of the directors rooms hung portraits of the generations who had guided the old firm for the past 100 years, and under their watchful eyes Nancy and Hugh settled down to guide the new era of Nettlefold and Sons, of London....

When the war broke out Nancy was already forming her plans, both for the firm and for her domestic life...her heavy responsibilites at Nettlefold's increased considerably when Hugh enlisted in the Army... Dealing with war time controls and Government departments meant the strangling effects of red tape. Nancy called her battle against such obstacles as "hunting tigers..". Nettlefold's itself, though it was so near Euston Station, which like all the big London stations was a favourite target for the Luftwaffe, miraculously survived the raids... "I simply haven't got it in me to face up to the post war problems..."

... She had meant to retire at 50 and in 1944, when she wrote that letter, she was 53 and the war not yet over. Hugh had never regained his strength after an operation two years before and did not feel equal to any heavy strain.

The gist of the letter was that Nancy and Hugh had decided it would be best to accept an offer of being bought up by Guest, Keen and Nettlefold, the big Birmingham firm which had actually risen from the auxiliary firm started there by Mr Edward Nettlefold and Mr Joseph Chamberlain, Senior, but which had become independent of and outgrown its parent in London. The sale went through...

She did not actually retire from the firm until 1948.