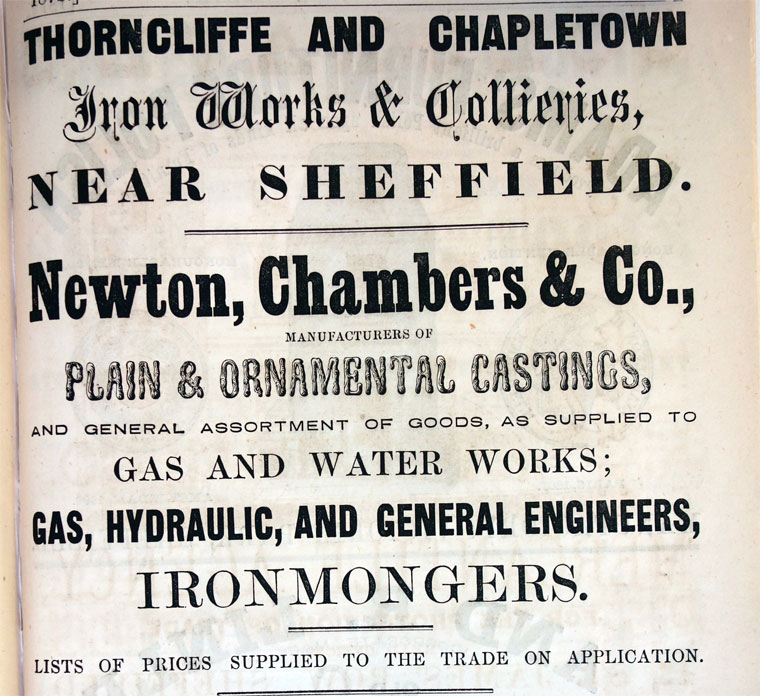 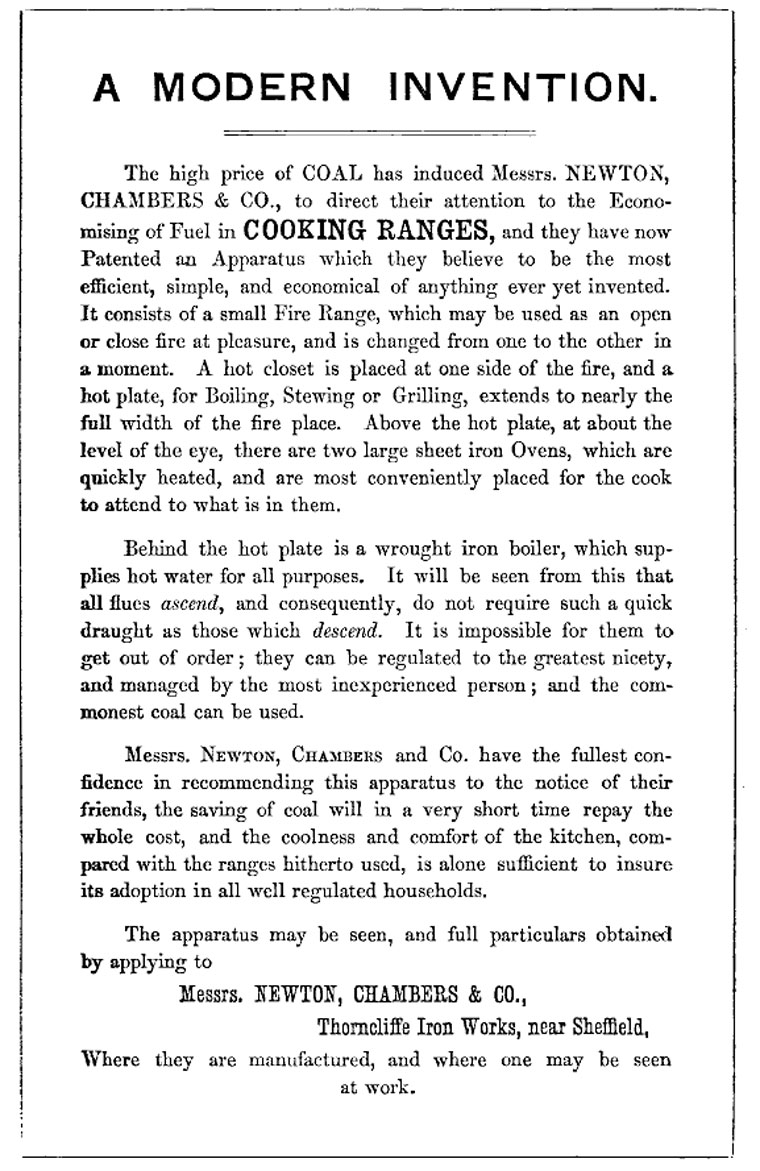 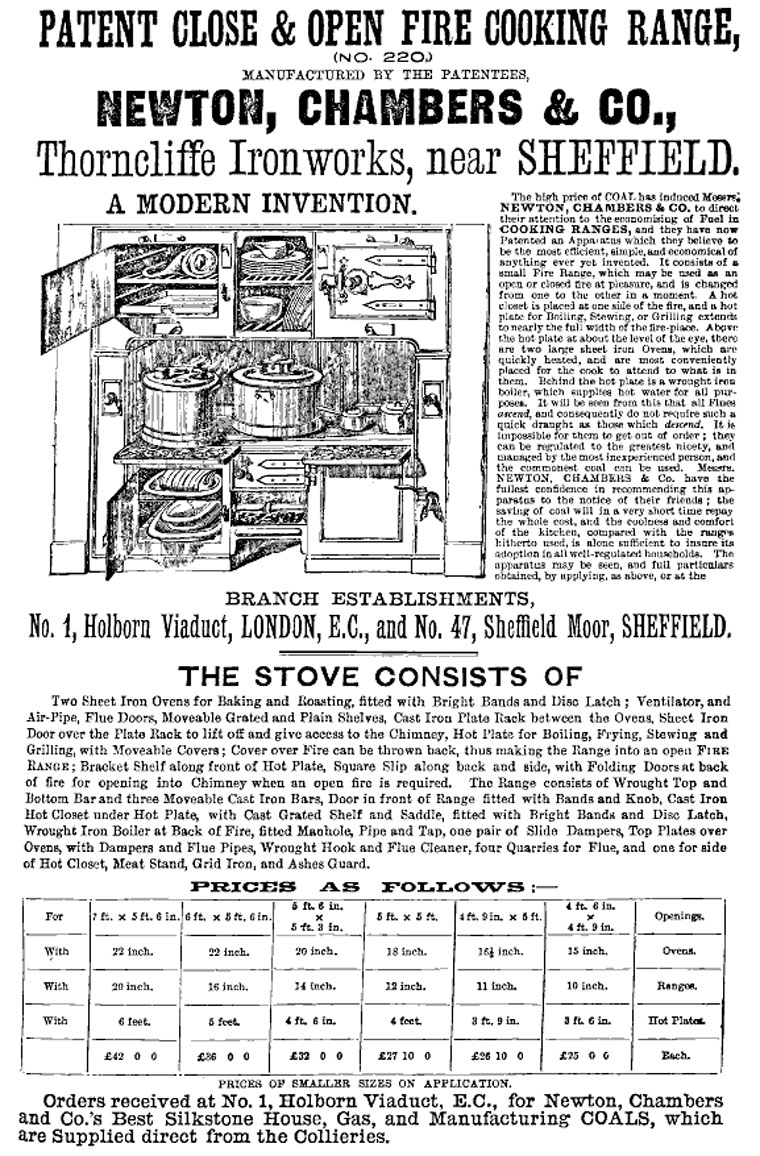 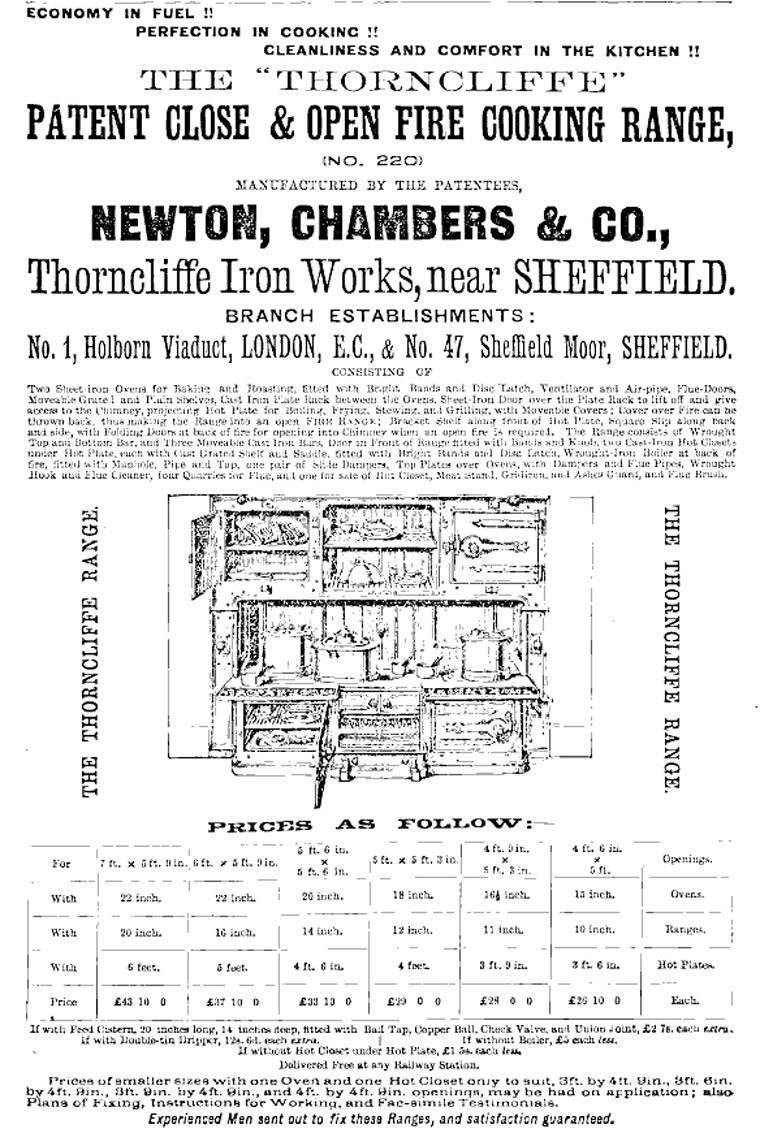 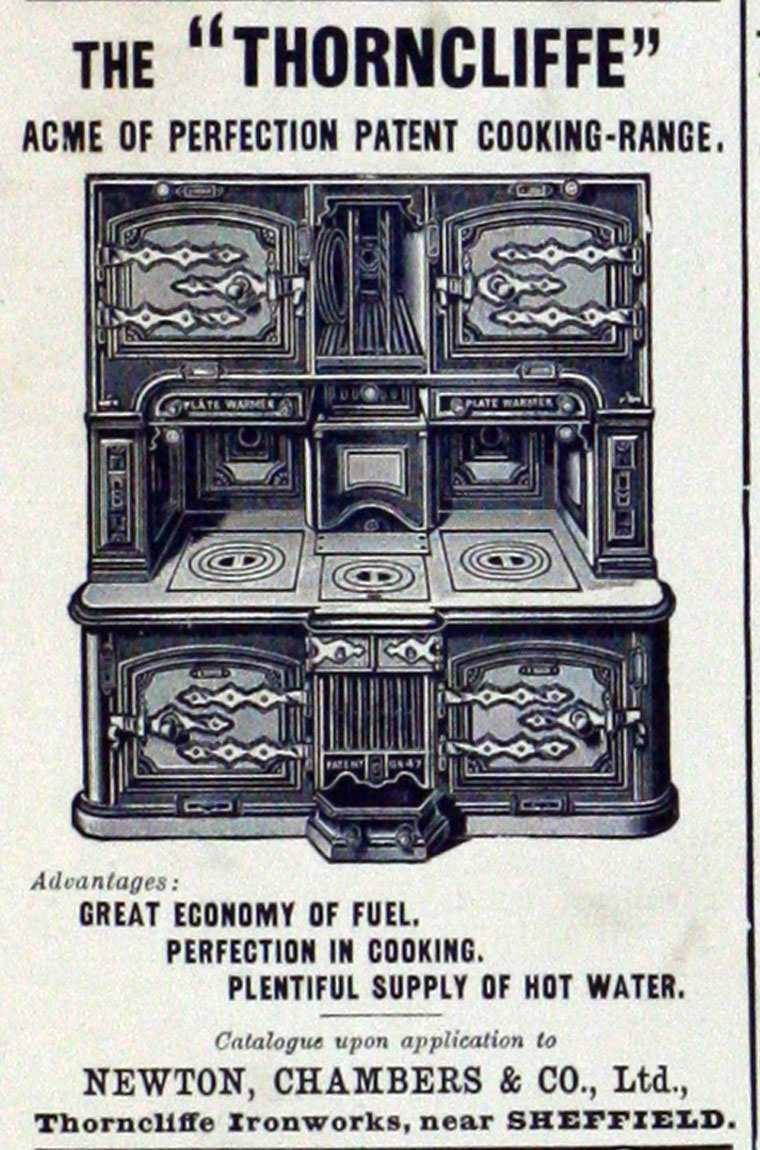 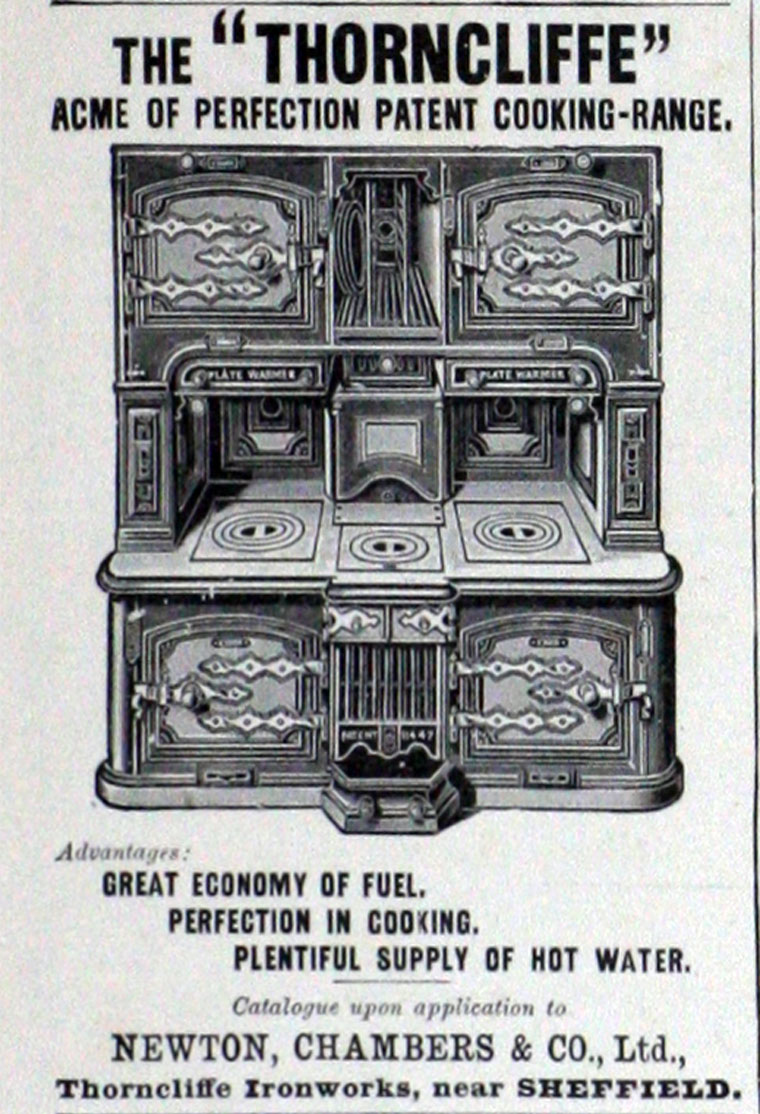 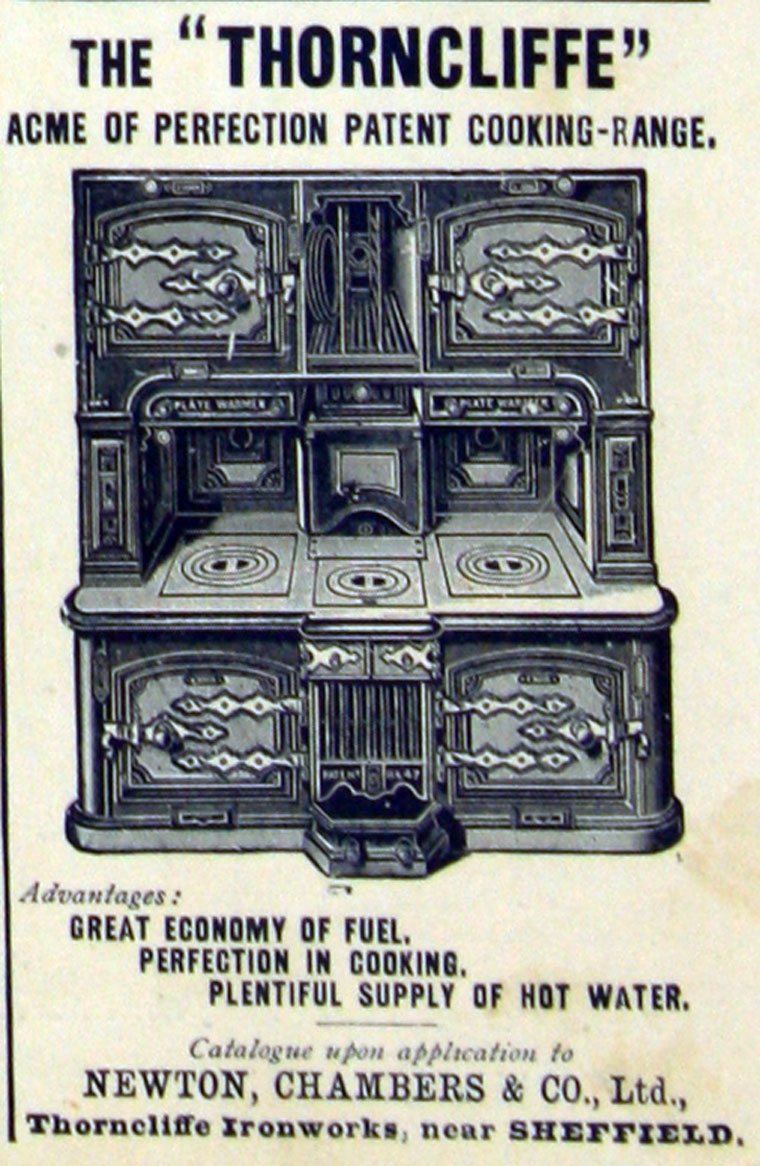 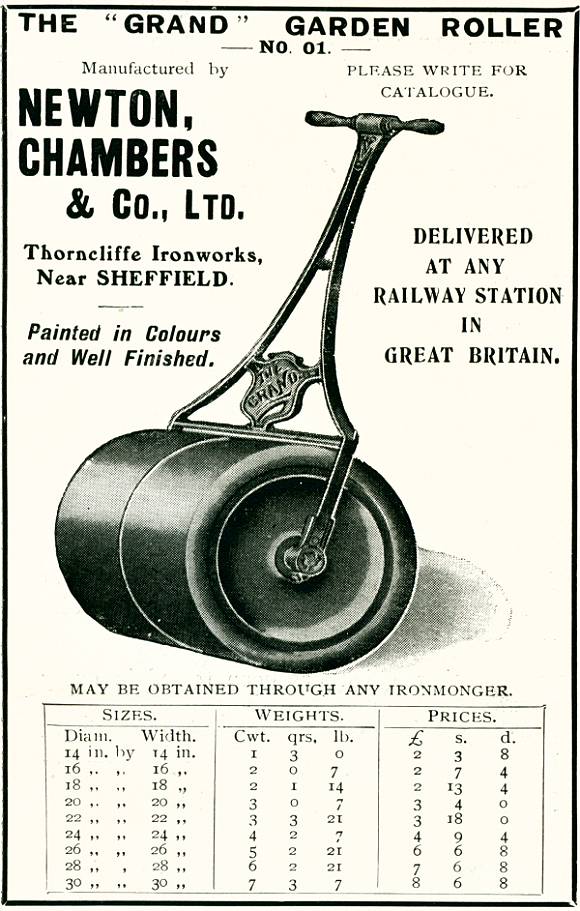 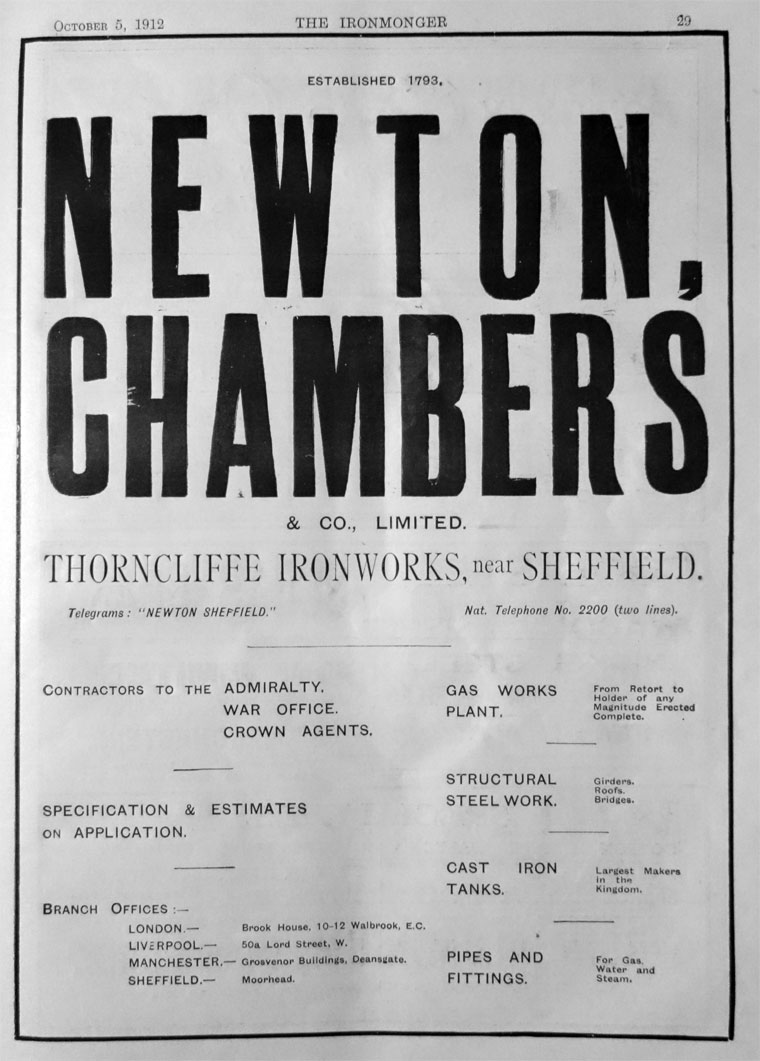 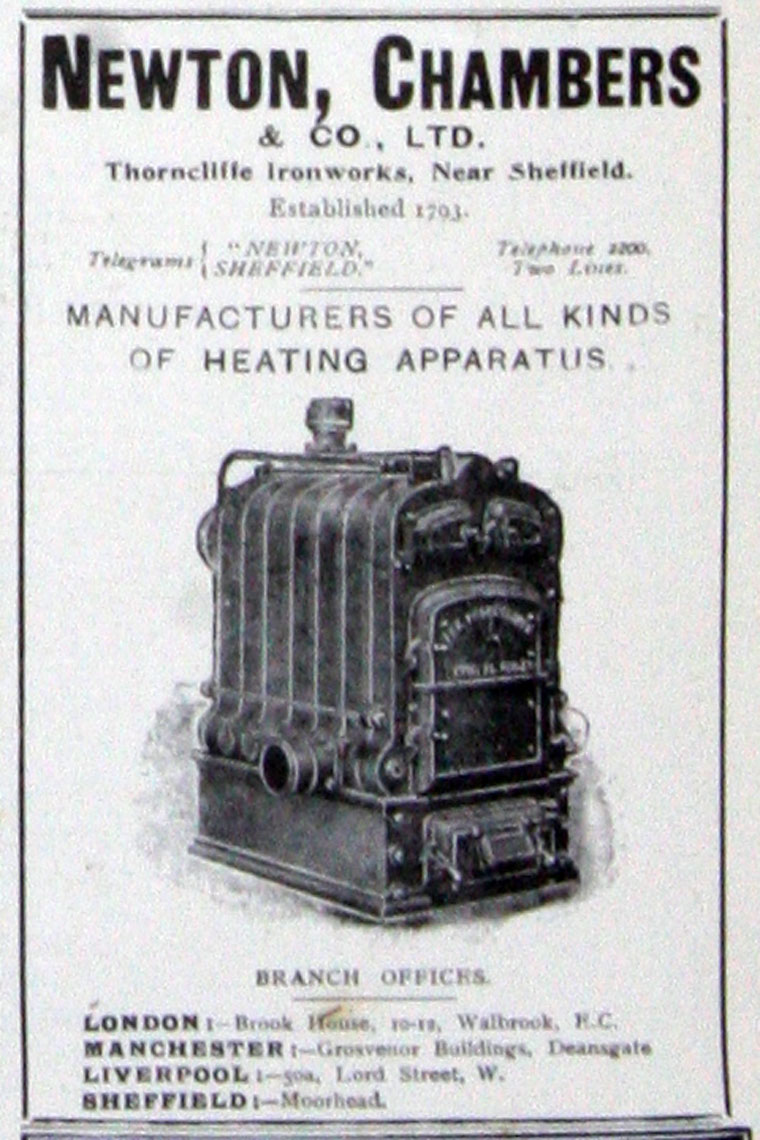 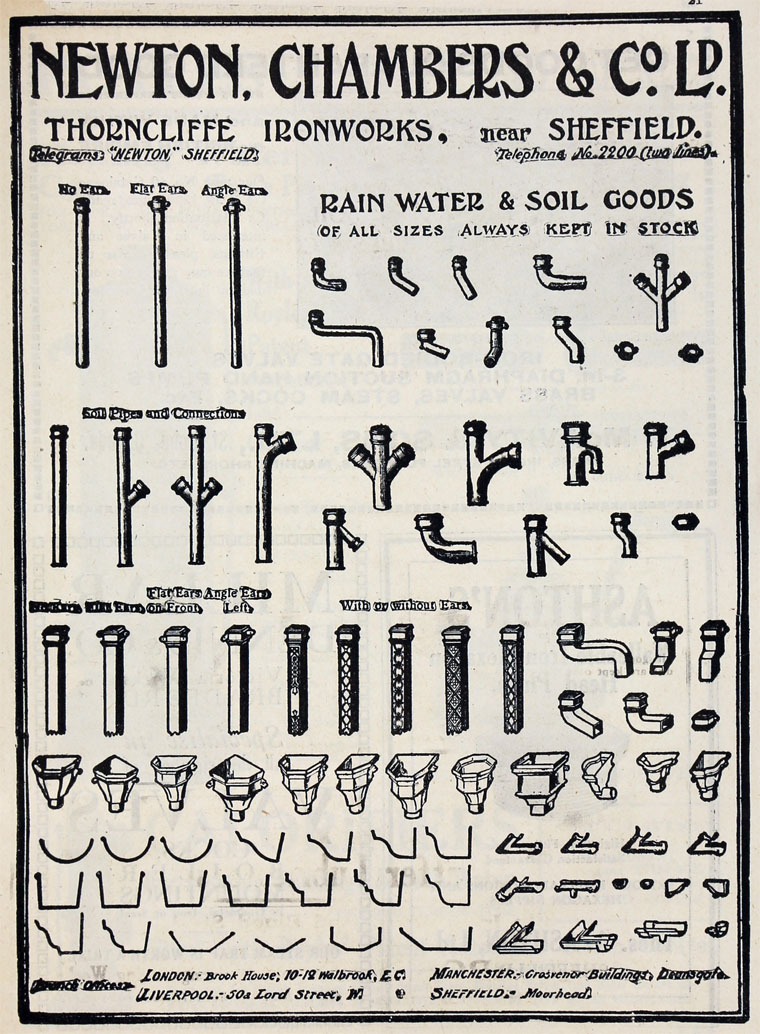 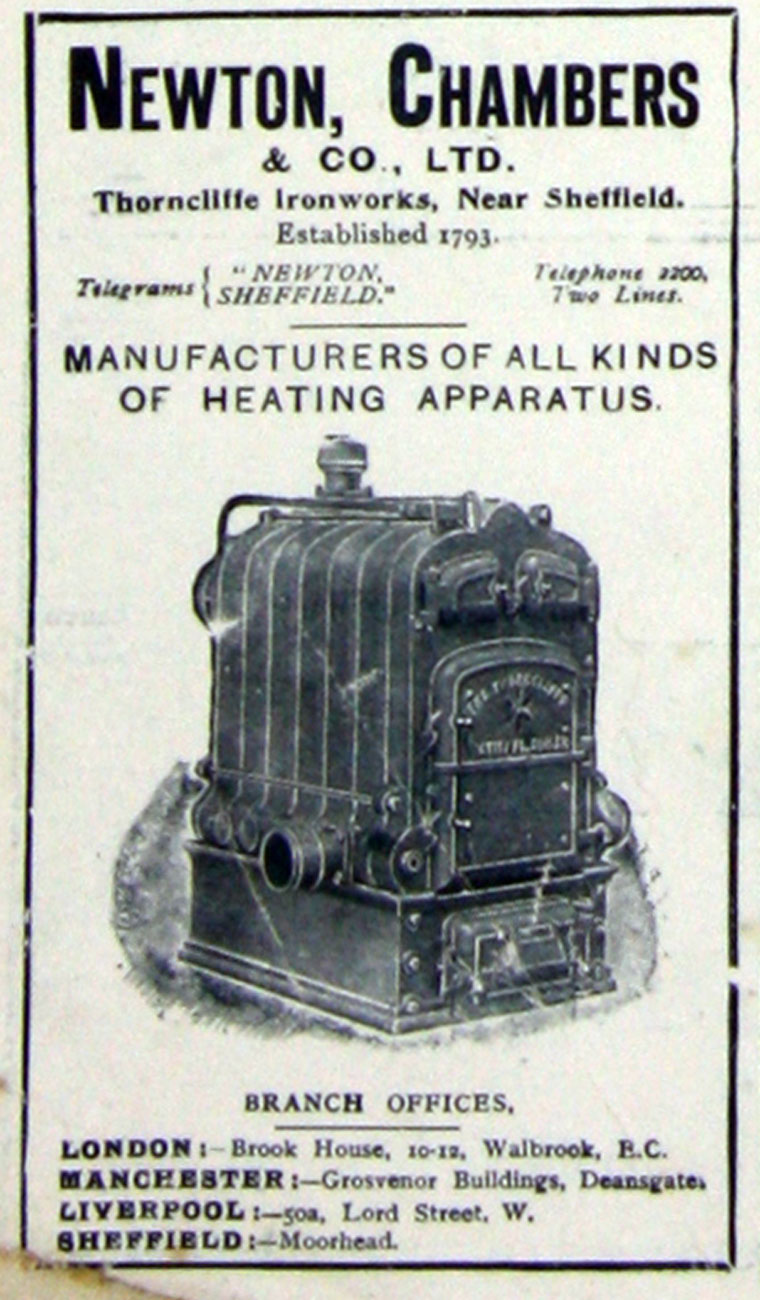 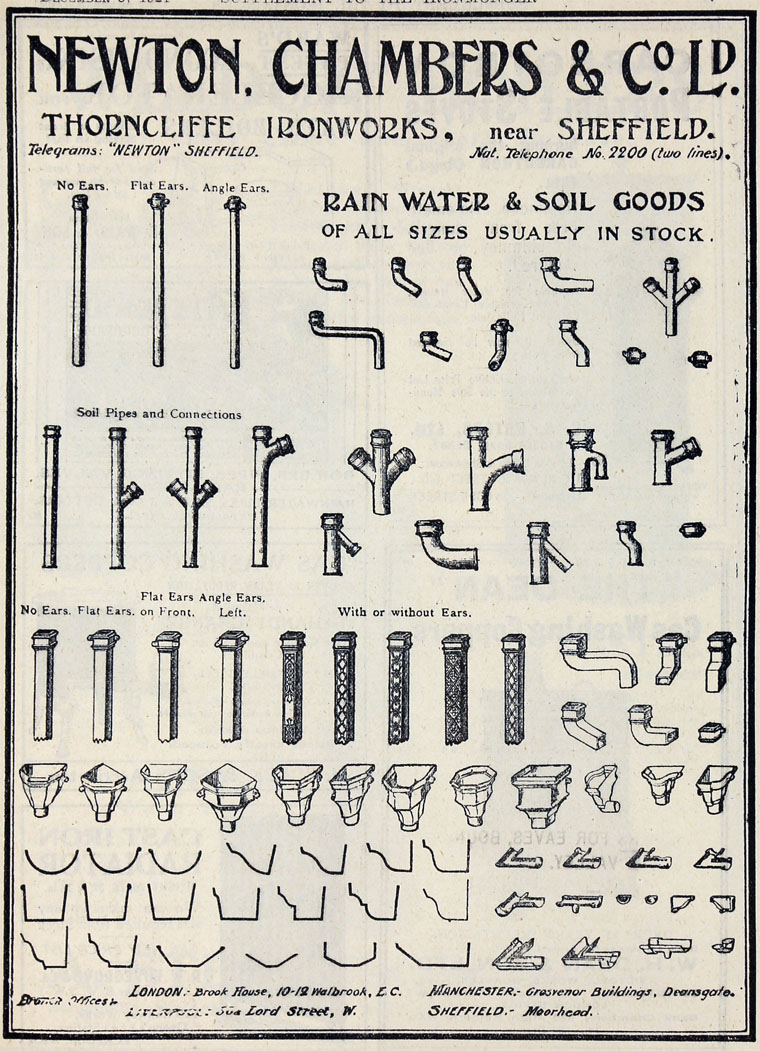 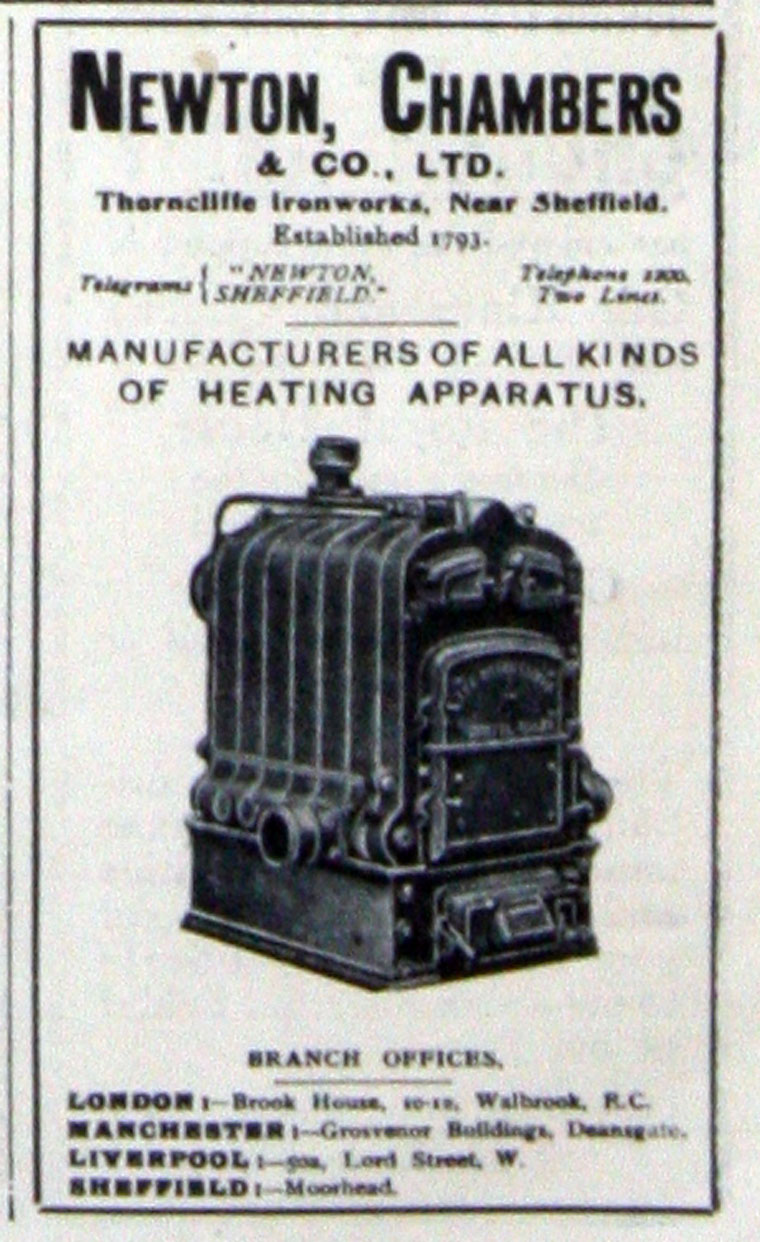 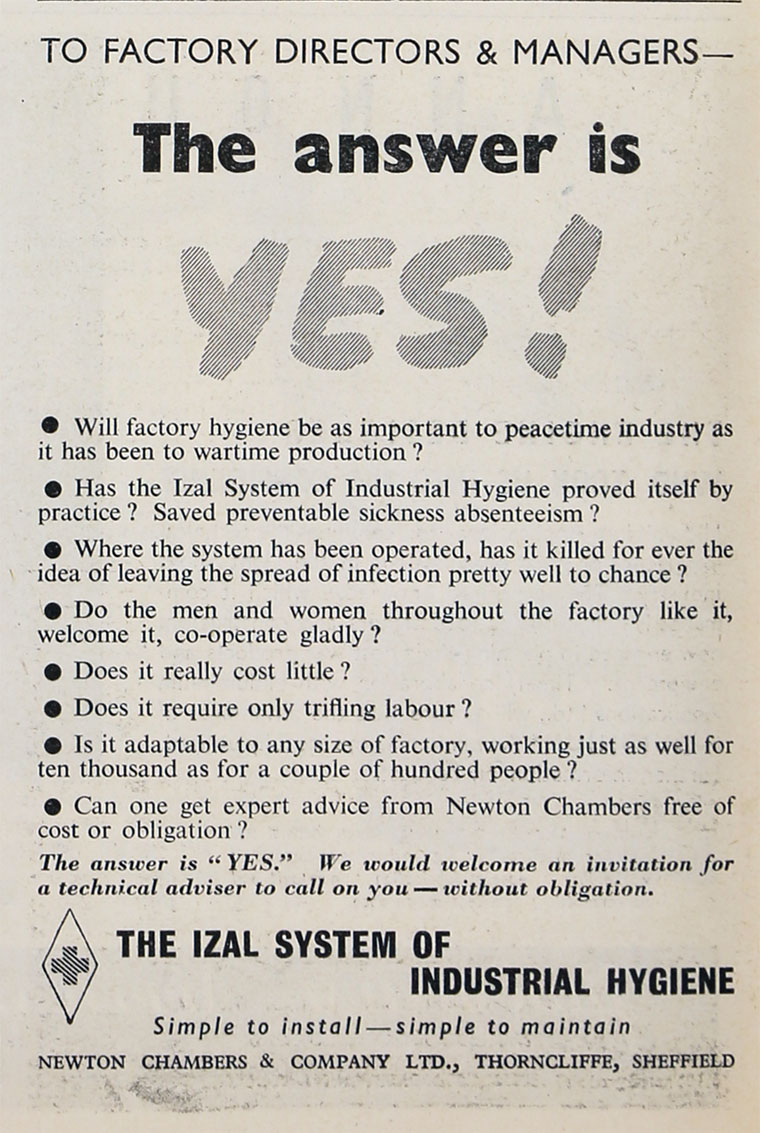 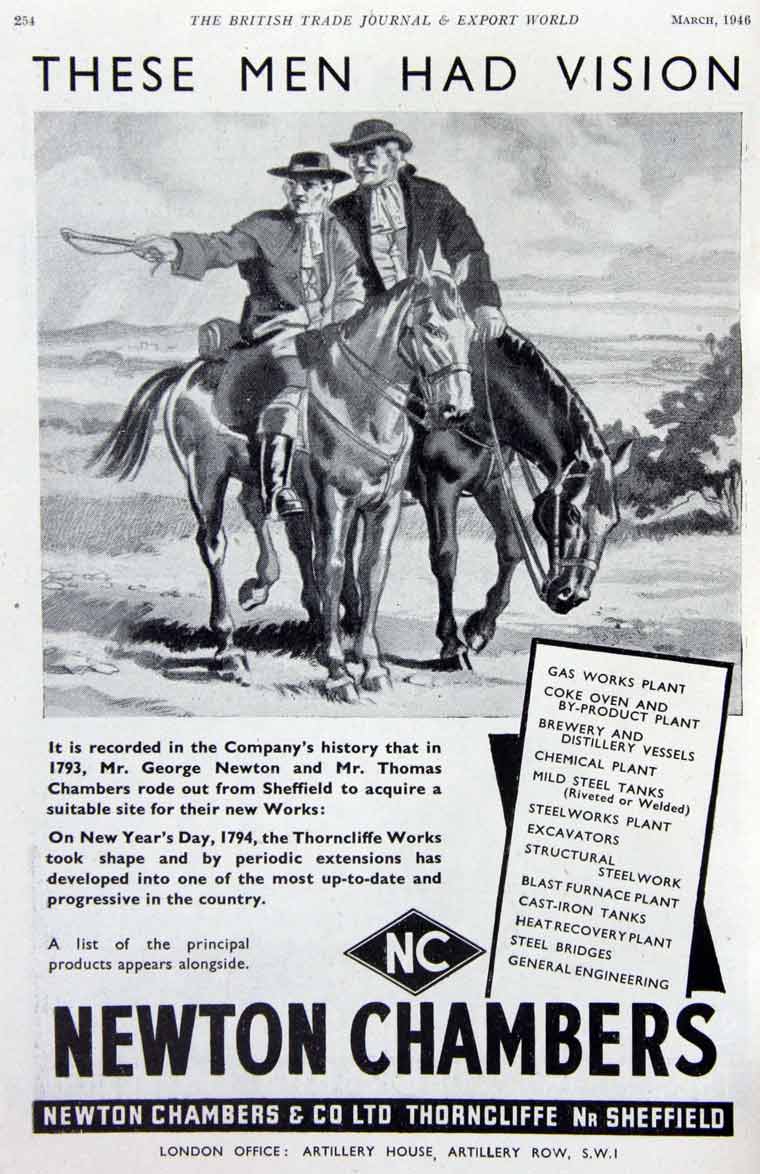 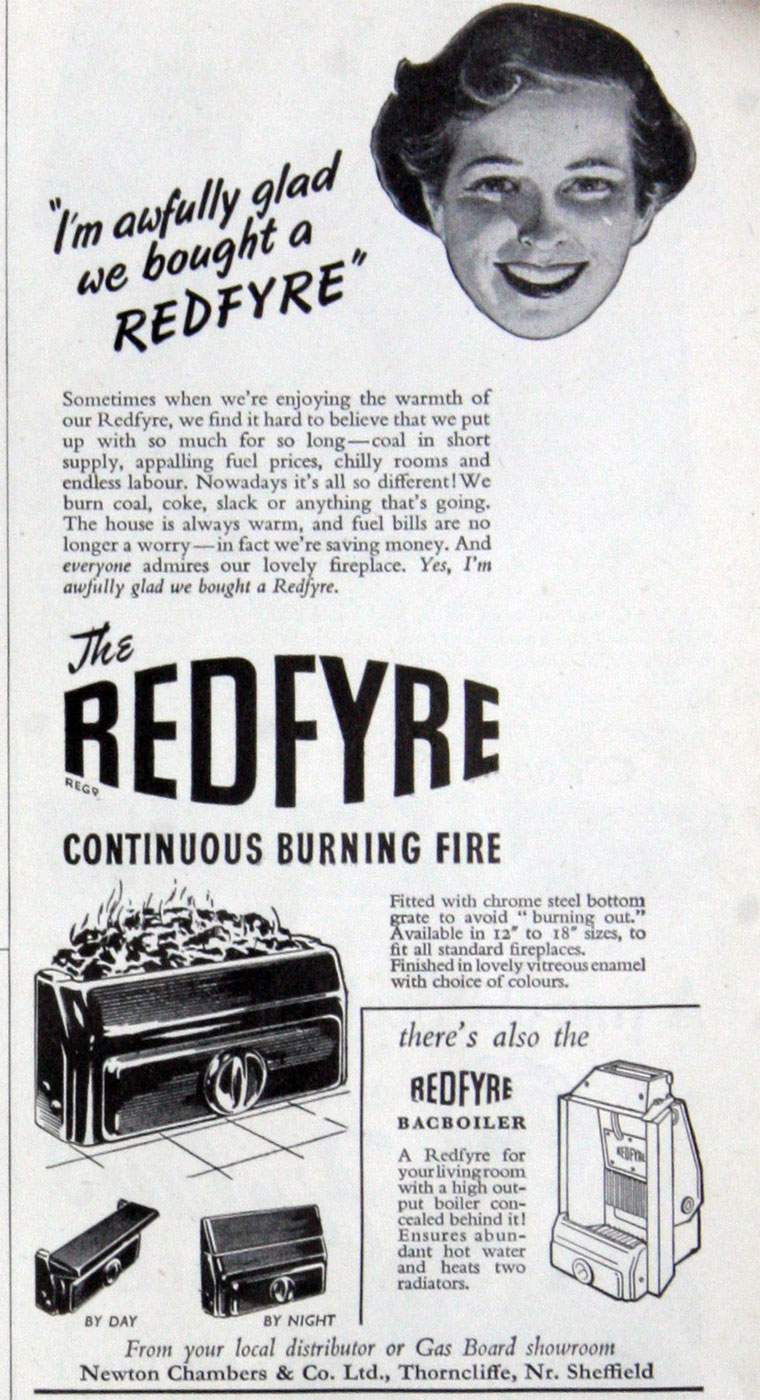 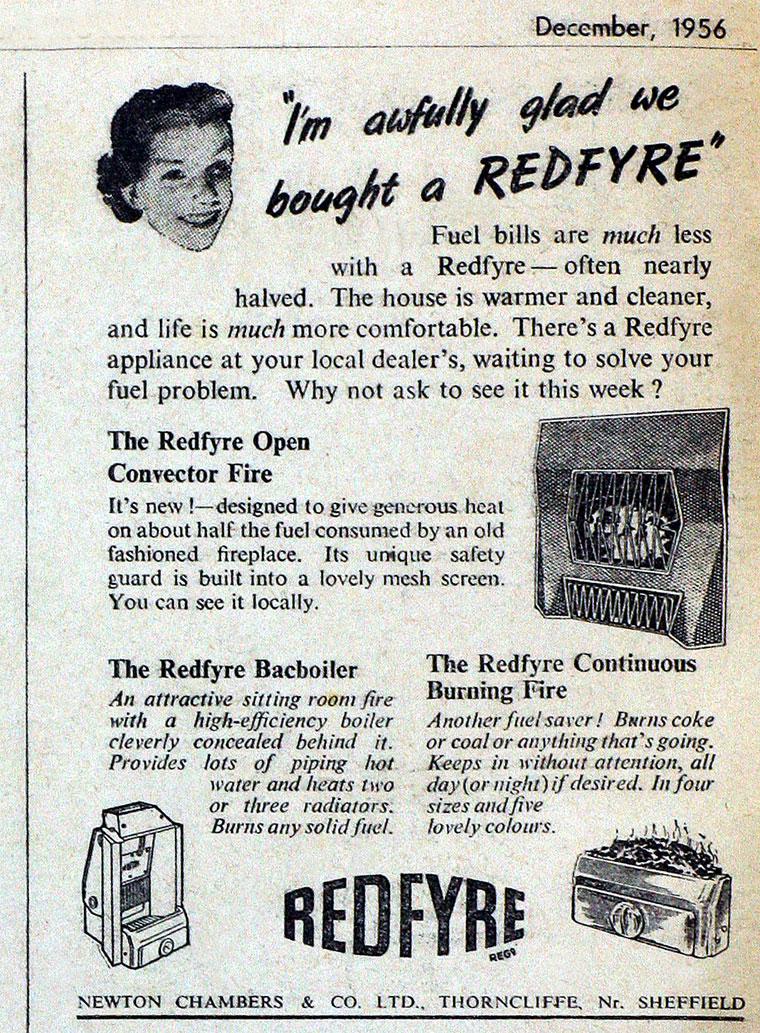 1789 George Newton and Thomas Chambers entered into a partnership that would result in the founding of one of England's largest industrial companies of that era: Newton, Chambers and Co. [1]

George Newton was a businessman, Thomas Chambers a craftsman in iron and their partnership had the aims of smelting and casting iron, in various forms.

1792 They bought the mining rights to the Thorncliffe valley from the Earl Fitzwilliam and set up their works on the Thorncliffe site near Chapeltown, to the north of Sheffield.

1815 The partners met with William Murdoch, the inventor of coal-gas lighting, this being seen as providing a growth in work for their foundry. Coal, from the company’s mines, was provided as charge for beehive coke ovens which were built on the site.

1881 Public company. The company was registered on 24 October, to take over the ironworks, collieries and business of the firm of the same name. [2]

1894 Awarded a silver medal for their stable fittings (Thorncliffe Ironworks). [4]

By the end of the nineteenth century the company was not only mining coal and ironstone but building blast furnaces, coke ovens and chemical plant. Heavy section iron, cast in the foundry was used in two iconic structures: Tower Bridge, crossing the river Thames in London and the Eddystone Lighthouse.

1912 Newton Fire Extinguisher Co incorporated as a limited company to carry on the fire engineering department of Newton, Chambers and Co. Ltd.

1920 The Rockingham and Thorncliffe coke oven and by-products works were put into a separate company: Thorncliffe Coal Distillation Ltd[7]

1927 See Aberconway for information on the company and its history. Was one of the main companies making stove-grates.

1927 - May. The firm blow out their No. 1 blast-furnace towards the end of last week and lit their re-built. No. 2 furnace. Their third furnace has recently been dismantled. The work of rebuilding the No. 2 furnace was carried out by the firm itself, and a number of new features are embodied in the construction particularly as regards the methods of charging and filling. [8]

1932 Working arrangement with Wellman, Smith, Owen Engineering to consolidate their interests in the iron and steel industries; purchased shares and nominated directors to Wellman's board[12].

WWII The Thorncliffe works came under the control of the Admiralty in 1939. A new workshop was constructed at Warren Lane, a short distance away from the Thorncliffe works, which was used to build army vehicles and became the largest manufacturer of Churchill tanks for the war effort. The infamous traitor, William Joyce (Lord Haw Haw), in one of his radio broadcasts threatened to "dot the I" on the Izal name with a bomb. It was intended to destroy the source of the Churchill tanks. A near miss followed but the works remained intact.

In 1947 Newton, Chambers and Co started producing the American brands of Koehring excavators under the Newton Chambers Koehring, name, NCK.

1948 The nationalisation of the coal and steel industries saw the group sell off its interests in these fields (N.C. Thorncliffe Collieries Ltd and N.C. Thorncliffe Coal Distillation Ltd) but many others remained, in particular tar distillates, the basis of many products manufactured by its Izal subsidiary.

1949 Introduced an excavator with name NCK which was made in a factory previously used to make Churchill tanks; the consultancy arrangement with US Koehring Group gave access to the latest technology[14].

1958 The engineering part of the group designed and supplied coal-gas and chemical plant. Took over Ransomes and Rapier, in 1958, to add to its portfolio and so became a major maker of excavators, drag-lines and other construction equipment. The group also set up Redfyre as a marketing company for coal-burning grates which were made in its foundry. Changes, in particular the Clean Air Act, saw the company move into light fabrications and oil-fired central heating equipment. [15]

1961 The company was a member of group that offered to subscribe to new shares in Hadfields as a way of injecting cash into that company[18].

1970 Closed the iron foundries which had been loss making for 6 years[20].

1972 Planned to close Ransome and Rapiers' Ipswich works and move the business to Thorncliffe but the group was taken over by industrial holding company Central and Sheerwood who kept Ipswich open[21].

1973 The oil-fired boiler market collapsed in the autumn, with the increase in oil prices.