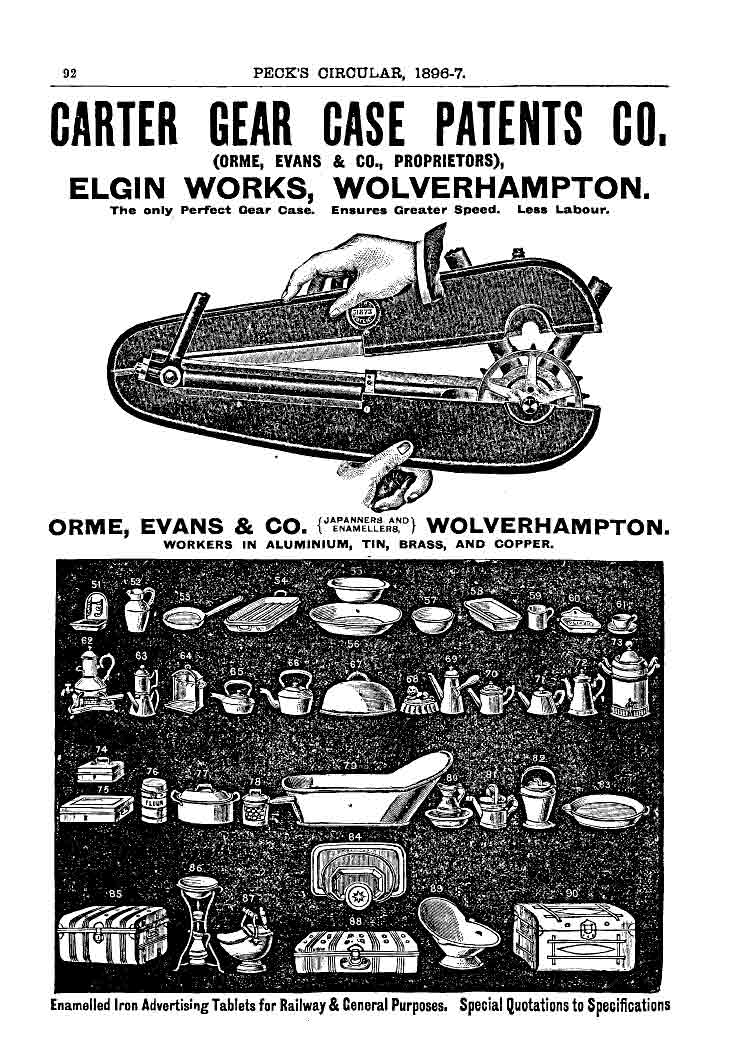 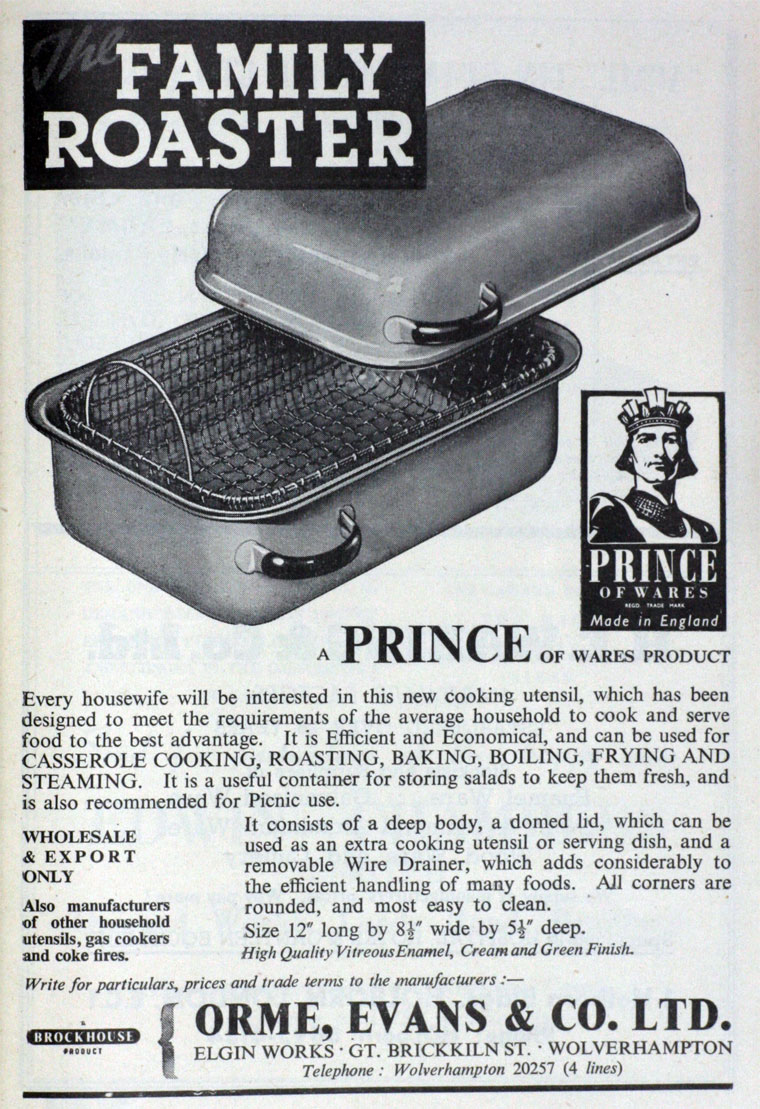 of Elgin Works, Wolverhampton were makers of the Carter Gear Case for cycles. (1897)

In an advertisement, Orme Evans and Co claimed to have been founded in 1790. It is possible that this was the foundation date of one of the other companies they took over.

1864 An article on the firm in Wolverhampton and South Staffordshire Illustrated said the proprietors had stated that the firm was originally established in 1864, by Alfred Orme and Thomas Orme, trading as Orme Brothers.

1878 The brothers were joined by Bernard Evans and became Orme, Evans and Co.

1889 The Harrison Carter patent gear case for cycles was introduced to the public at the Stanley Show. Orme Evans were said to have a special department for working the patent which had great success and "many thousands of Carter gear cases have been supplied to riders of every class and every nationality in the world" - probably an exaggeration. John Marston also saw the gear case at the same show and incorporated the technology in its Sunbeam Cycles.

1898 The company was registered on 29 December, to acquire a business of enamellers and japanners. [1]

1899 Became a limited company, Orme, Evans and Co Ltd, with a capital of £50,000. An article refers to the Elgin Works as occupying "an extensive area on which are erected several ranges of buildings from one to three stories". A further article says that their products include "all kinds of enamelled holloware, and enamelled advertising plates, besides a large number of specialities in sheet iron, steel, tinplate, brass and copper, and art manufactures". [2]

A single sheet flyer (c.1899 or later as it has "Ltd" in the title) showed trunks, which were probably steel framed boxes covered with canvas. Trunks had become an important commodity in late Victorian times due to an increase in travel by rail and by boat to colonial parts.

1902 Article in The Wolverhampton Exhibition Pictorial: "At first purely japanned goods were manufactured, a speciality being made of tea-trays, a "line" which has been more hit than anything else. Then tin-plate working received its proper share of attention, and when the trade declined - as it is notorious it has everywhere - the firm, ever on the alert, took up the manufacture of enamelled hollow-ware, putting down an extensive plant to produce it. They have had their reward, having been extremely successful - more so in fact than any other English firm. The company this year took over the Phoenix Works". The Phoenix Works were those of Henry Fearncombe and Co, japanners. Many firms of japanners had to find other work when japanning went into decline in the second half of the nineteenth century. Tinplate wares were an obvious recourse but many of them took to making brass and copperware, which seems to have had regained popularity as japanning declined. Orme Evans certainly produced brass and copperwares (as had Henry Fearncombe) but, to judge by the evidence available, they were not great producers of this and certainly not on the scale of Sankeys, Beldray or even Loveridge.

1902 Ordnance Survey map shows "Elgin Works (Tin Plate etc.)" bounded by Brickkiln Street, Herrick Street and Alexandra Street. When Orme Evans took over Henry Fearncombe in 1902, they would have acquired Phoenix Works, which lay between Dudley Road and what is now the Birmingham New Road, just north of All Saints Road. It is not known whether they retained and used these works but in 1924 they were still displaying Fearncombe's trade mark on their letterhead.

The Wolverhampton and South Staffordshire Illustrated reported on the design department: A numerous staff of designers and decorators are constantly at work in getting out new patterns and in the production of the various goods, many of which are beautifully decorated with artistic taste and finish, this being especially noteworthy in the case of japanned goods and in the chasing and repousse decoration of coal vases and scoops, jardiniere vases, tea trays, waiters, etc.

1902 The company was well established, and making a wide range of goods in a wide range of materials and finishes, when they bought the tinsmithing, enamelling and japanning business from John Marston but not its premises at Jeddo Works in Jeddo Street. Orme Evans may already have been using the "Prince of Wares" trademark.

At this time, Marston had been making domestic wares in brass and copper, but not on a large scale.

1920 an advertisement covered the usual range but without mention of enamelled advertising signs. They now claimed to make radiators for cars, lorries, aeroplanes and seaplanes. At this time many metal working firms claimed to make vehicle components but probably were only willing to make them if anyone asked.

1927 A catalogue, dated May, still very Victorian in appearance. Most of Orme Evans products were for domestic use, though they also had a large section on "Dairy Accessories". There was no brass and copperware in the catalogue.

1941 Brockhouse took a controlling interest in Orme, Evans and Co[5]. Brockhouse had become a large conglomerate and it seems that Orme Evans continued, with its own identity maintained, within that organisation.

The company was listed in the 1959-60 Red Book but is missing from the 1961 edition. Exactly why and when it closed - or lost its separate identity - is not known.