The Dean Forest Railway runs behind the former blowing engine house. Remains of ironworks in background? 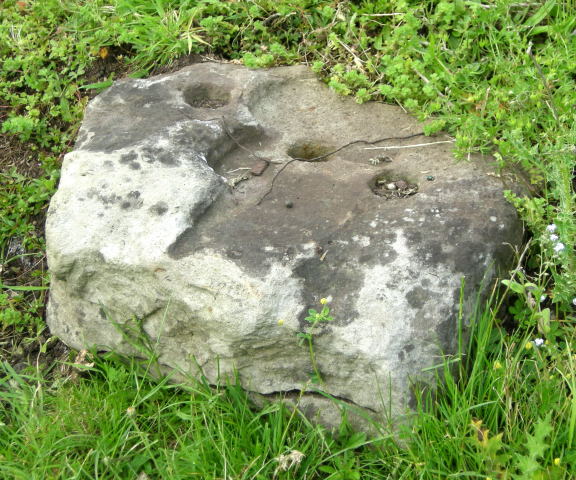 of Parkend, between Coleford and Lydney, Forest of Dean

The first recorded furnace and forge were built in 1612. However, evidence of ancient iron working was found in 1858:-

'Roman Remains.—A short time since some excavators were at work near Parkend in digging the foundation for a row of cottages at the works of the Forest of Dean Iron Company, when they found 13 old blooms of charcoal iron of very excellent quality, and about ¼ cwt. each. This is another proof of the ancient and continued ironmaking and operations which have prevailed in the district, and of which there is unfortunately no record existing.— Gloucester Journal.'[1]

The Wikipedia entry provides a good overview of the history of the works.

Much more detailed information was provided by Cyril Hart[2], from which the following information is drawn.

C. Hart included a detailed account of all the smelting and forging plant and equipment present in 1635, from the 22 ft waterwheel to the number of coal baskets. The furnaces and forge were destroyed in 1644 (Civil War), but rebuilt between 1662-74 by Finch & Clayton, but demolished in 1674.

Hart records that the furnace remains were surveyed by David Mushet c.1812. A furnace fuelled by coke (rather than charcoal) was built in 1799, and by 1807 had a steam engine.

The plant was sold to John Protheroe, who in 1824 passed it to his nephew Edward Protheroe. The local coal was not well suited to coking, but Moses Teague at Darkhill Iron Works carried out experiments and succeeded in smelting good iron with local Low Delf coal. This probably lead to the Parkend furnace being altered.

In 1826 William Montague and John James of Lydney became the lessees, with Moses Teague as their manager. By early 1827 they had built a second furnace, with blast provided by the power of a massive waterwheel, 51 ft diameter, 6 ft wide, weighing 60 tons, the castings being made in Gloucester. Water supply problems meant that this had to be supplemented by a 90 HP steam engine.

The furnaces were out of blast from about late 1841 for a period, but were back in use by December 1846. In 1847 David Mushet Jr. wrote that 'the Parkend hot-blast iron possesses amazing strength. Mr. Montague, of Gloucester, the proprietor, has cast railway girders of most unusual power, in proportion to their scantling: I have seen pigs of his iron deflect from 1 to 2 ins ere repeated blows couldm produce a fracture.'

Following Montague's death in 1847, John James became sole lessee, and he installed an 80 HP engine in 1849. He bought the freehold from Protheroe in 1854, and the furnaces were managed by Charles Greenham, managing partner of Forest of Dean Iron Company. James and Greenham added iron forges, rolling mills and tinplate works. By 1871 there were three furnaces in blast.

In 1875 Edwin Crawshay bought the plant. Capacity of the three furnaces 600 tons of pig iron per week. Manager: George Belcher. The works closed in 1877.

A portion of glassy Parkend slag (and slag from other ironworks in the area) was crushed for use by makers of glass bottles in Bristol. For some years the Kear family ran a slag crushing business which used stamps powered by a 24 ft waterwheel.

In the 1870s, thousands of tons of Parkend slag were mixed in the ratio of 3 parts slag to 1 part Aberthaw lime to make concrete to fill the cast iron columns of the Severn Railway Bridge[3]

The business was commemorated by the name of a row of terraced houses - 'Stampers Row', but this row is now called Hughes Terrace.

1841 'EXTRAORDINARY MAKE OF IRON.—At the Park-end furnace near Coleford, the property of Messrs. Montague and James, 144 tons of iron (Nos. 1 and 2) were made last week. We understand that so large a quantity of iron, and of so good quality, has never before been made in the same time at one furnace.'[4]

1859 'At Parkend Ironworks, the property the Forest of Dean Iron Company, No. 1 furnace produced last week 145 tons of pig iron. The second furnace is undergoing repairs, but no time will lost in putting it in order for work, and it will probably be blown early in the coming spring. A considerable portion of the rich calcareous iron ore from the Easter mine, near Coleford, is now being used Parkend, and with the best results, the increasing weekly yield will show. This ore is mainly what termed technically 'brush,’ either in large lumps, or crushed and broken, with slight layers of very thin grease-like red clay amongst it. It fuses remarkably easy, assists the action of the furnaces, and is latterly so much improved in quality, that the sample upon the banks now, which is not less than 6,000 tons, contains fully 45 per cent, of iron. — Mining Journal.'[5]

1879 'PURCHASE OF PARKEND IRON-WORKS. Daring the long depression of trade, it became necessary to blow out the furnaces at Parkend, in the West Dean district, and iSoudley Works, in the Cinderford Valley. The Parkend furnaces have now been sold by Mr Crawshay to members of the Soudley firm, who, it is understood, are establishing a powerful company to carry on the two concerns, one of which will be devoted exclusively to the manufacture of steel.'[6]

1880 'PARKEND. Fire.—On Friday night a fire broke out at the recently started tin plate mills, but happily no serious injury accrued. It appears that the contents of one of the furnaces used for the purpose of boiling grease in the washhouse boiled over, and the furnace became enveloped in flame. Although it was midnight, Mr. Davis, manager, with staff of employes, were quickly on the spot, and by vigorous and timely efforts succeeded in extinguishing the fire.'[7]

1880 'A new and important company (says the Bristol Times) is in course of formation for re-starting the ironworks of Parkend, recently sold by the late Mr. H. Crawshay. It is proposed to adapt the works for the manufacture of steel by means of the Ponsard converting furnace. The company is contemplating the purchase of extensive mine areas.'[8]

1880 It was announced that a new company called the Ferro-Managanese Co Ltd was to be established, using the works at Parkend (excluding the mines), where Ferro-manganese and spiegeleisen would be produced. M. Ponsard had inspected the works at Parkend and found them well-adapted without any great outlay. The Directors were to be Edwin Crawshay, J. Martlett (France) and Robert McEwen of Manchester (Director of Ponsard Steel Patent Co Ltd).[9]

Two reservoirs were constructed about 1 mile upstream of the ironworks, to provide water for the works. These still exist.