Grace's Guide is the leading source of historical information on industry and manufacturing in Britain. This web publication contains 149,662 pages of information and 235,472 images on early companies, their products and the people who designed and built them. 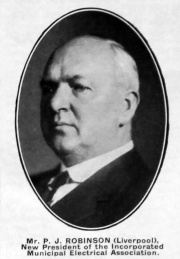 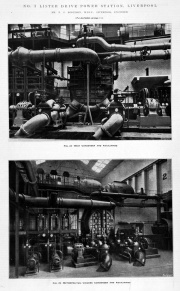 Mr. Percival James Robinson was Liverpools' City Electrical Engineer and City Lighting Engineer. At the close of his apprenticeship he studied under Professor Silvanus P. Thompson at the Finsbury Technical College and gained the City of London Guilds Diploma for Electrical Engineering and Chemistry. After service with theGarston and District Electrical Supply Co as Engineer and manager, he joined the Liverpool Corporation in 1902, when the Garston was taken over. He was appointed to his present position in 1928 on the death of Mr. Harold Dickinson. In addition to being responsible for the Electrical Supply Department which covers an area of over 100 sq.miles he carried out the design of the Clarence Dock Power Station.

PERCIVAL JAMES ROBINSON, C.B.E., M.Eng., was well known to a wide circle of engineers, especially those associated with municipal undertakings. He was city electrical engineer to the Corporation of Liverpool from 1928 until his retirement in 1944, and during that period he was responsible for the design and construction of a new distributing station on the site of the old Clarence Dock, which eventually had a capacity of 400,000 kW. He served his apprenticeship with Messrs. Johnson and Phillips, of Old Charlton, from 1896 to 1897 and received his technical training at the Finsbury Technical College, at that time under the direction of Professor Sylvanus Thompson.

After qualifying in mechanical and electrical engineering and chemistry he joined the Gaston District Electric Supply and Tramway Company as engineer and manager, but on the absorption of that undertaking by the Liverpool Corporation Electricity Department, in 1902, he began his long connection with the city's service, successively filling the positions of assistant, mains, and superintending engineer. In 1917 he became chief engineering assistant and three years later was made deputy city electrical engineer, a position he retained until he entered upon his final appointment, which included the duties of lighting engineer for the Corporation of Liverpool, with control over an area of 44 square miles and some 900 miles of streets. The greatly extended use of electricity for power and lighting in the Liverpool district of recent years was largely due to his energy and efforts.

Mr. Robinson was elected an Associate Member of the Institution in 1919 and was transferred to Membership in 1928. In addition he was a Member of the Institution of Electrical Engineers and a life member of the Society of Civil Engineers of France. He was also a past-president of the Municipal Electrical Association and had served on the National and North-West of England Consultative Committees. In recognition of his engineering services to Liverpool the University conferred upon him the honorary degree of Master of Engineering.

His death occurred at Deganwy, North Wales, on 23rd November 1944, at the age of 65, only seven months after his retirement.