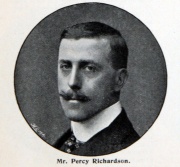 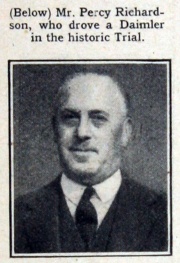 Drove in all early motor trials, including the 1,000 Mile Trial of 1900, and won a first prize

1901 June. London manager for Daimler.[1]; consulted by King Edward VII in regard to cars

1903/4 for first time directed the complete design of a car, the Brotherhood, later known as the Sheffield-Simplex.

1904 'RICHARDSON, Percy. Car: Brotherhood. Was for several years London manager of the Daimler Motor Co., but resigned in December, 1903, to take up the general management and a seat on the Board of the Brotherhood-Crocker Motors, Ltd., a private company recently formed in connection with the old established engineering firm of Peter Brotherhood, Westminster Bridge, London. The Brotherhood-Crocker Motors, Ltd., intend manufacturing a high-class motor carriage on simplified Mercedes lines, and also cars and wagons for commercial purposes. Mr. Richardson has been a motorist since 1897, and has toured on a motor in every part of Great Britain. He desires to see England the chief motor manufacturing country of the world. Clubs: Nottingham Automobile, A.C.G.B. & I.' [2]

1919 Left the position of Man. Dir. of Sheffield-Simplex Motor Works

1923 Having been engaged in the development and production of cars up to this date, then moved into other work.

We have also learned with regret of the death, on October 8th, of Mr. Percy Richardson, a director and former chairman of Foster, Yates and Thorn, Ltd., Blackburn.