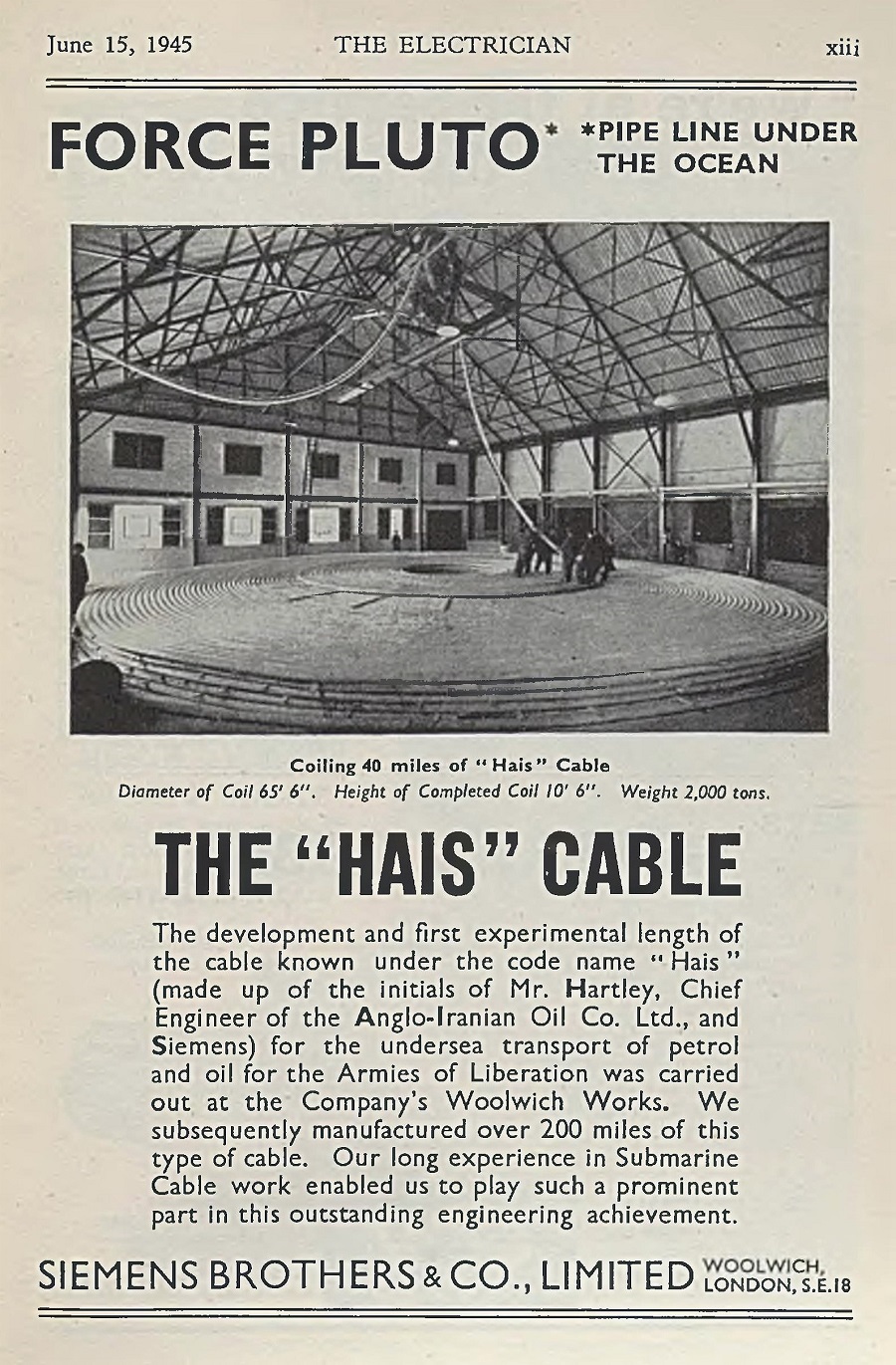 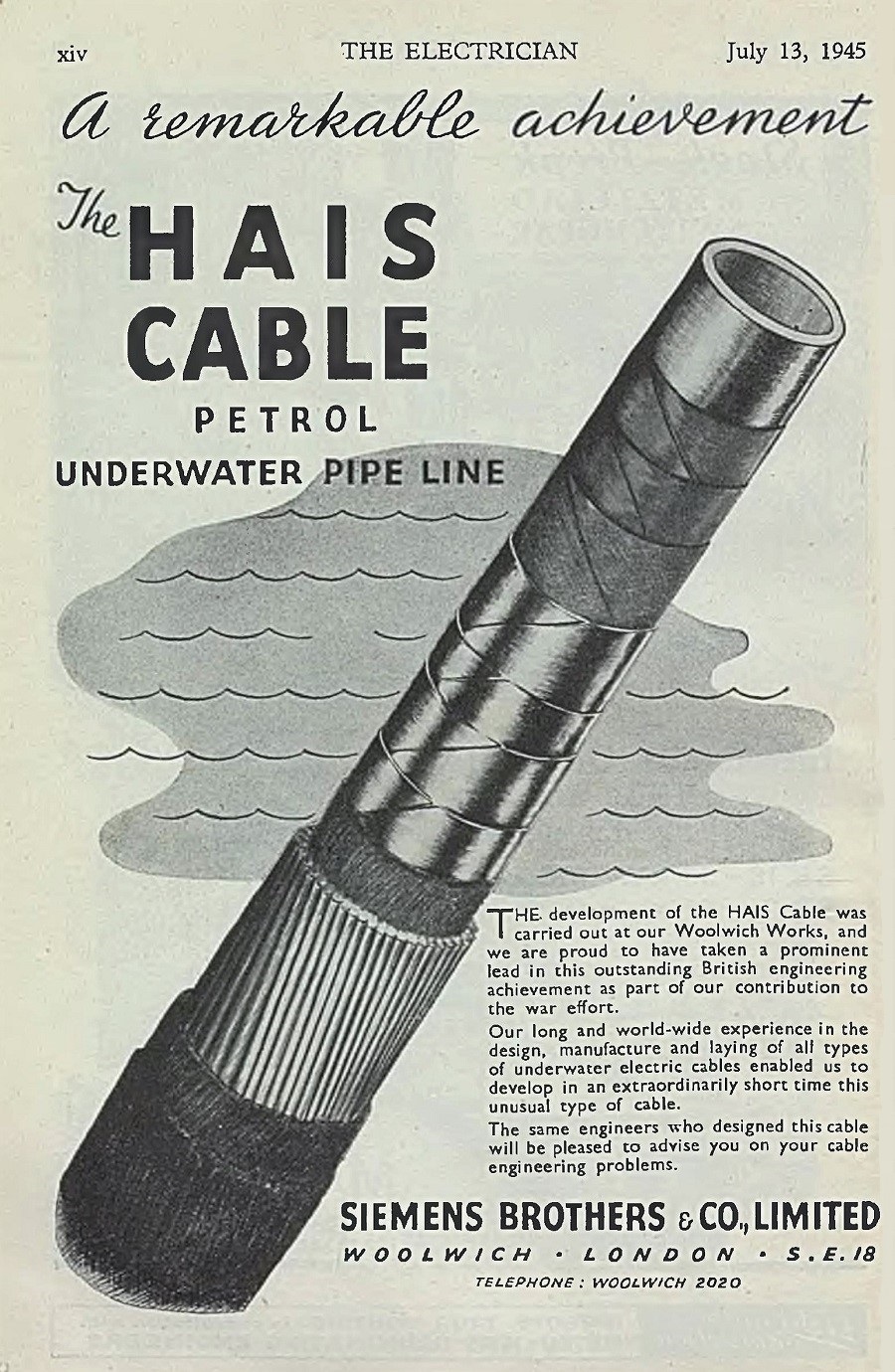 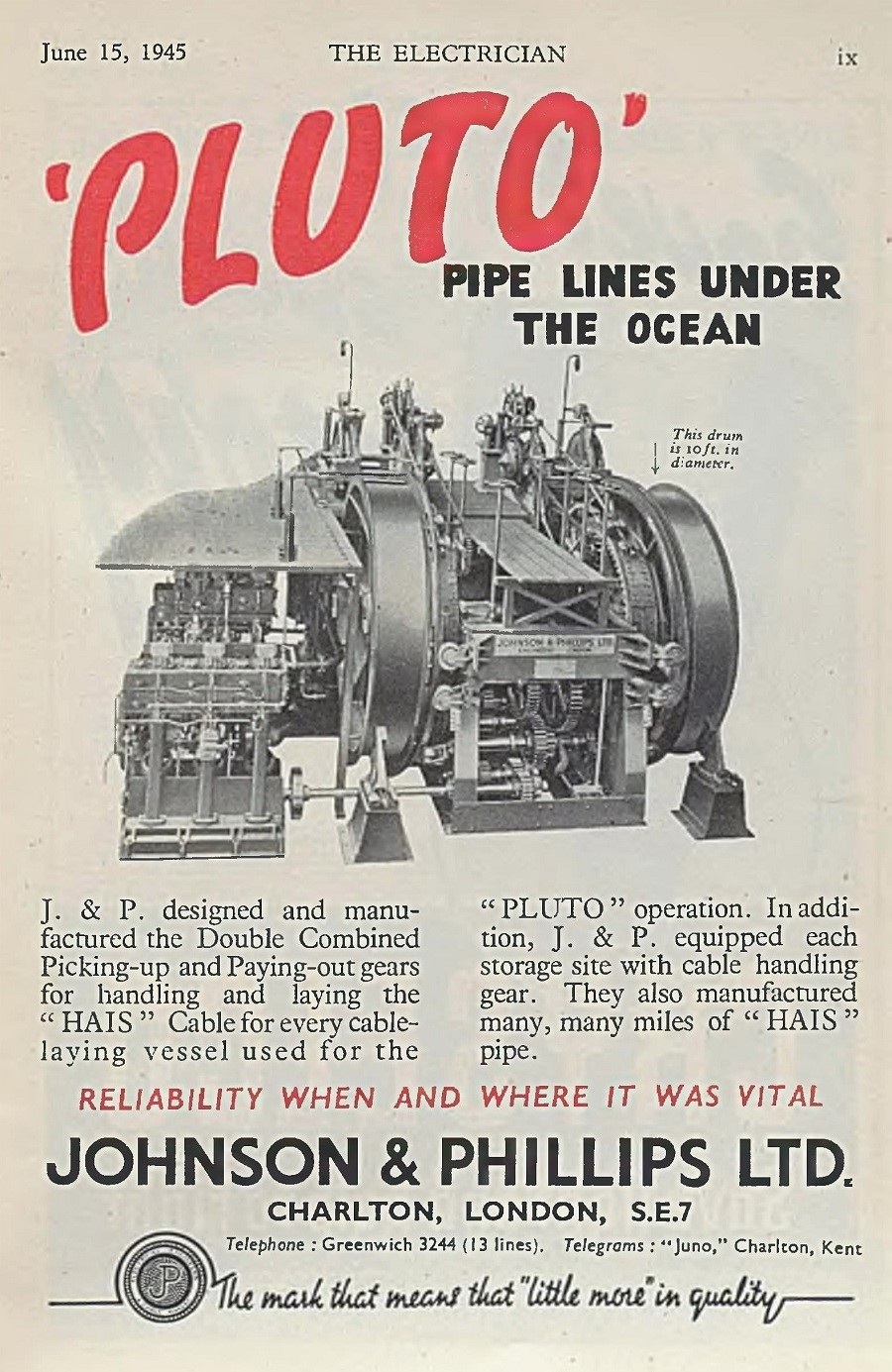 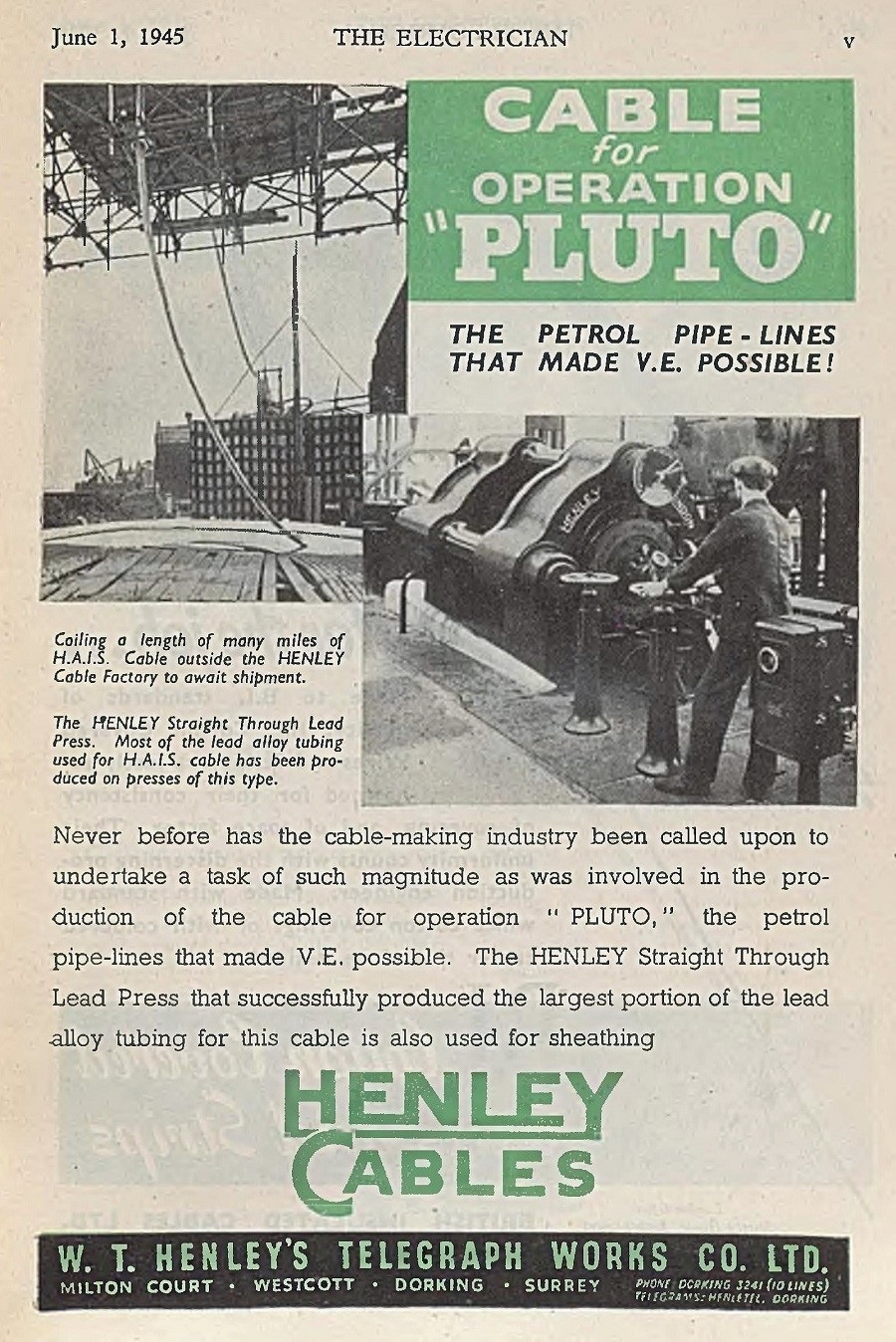 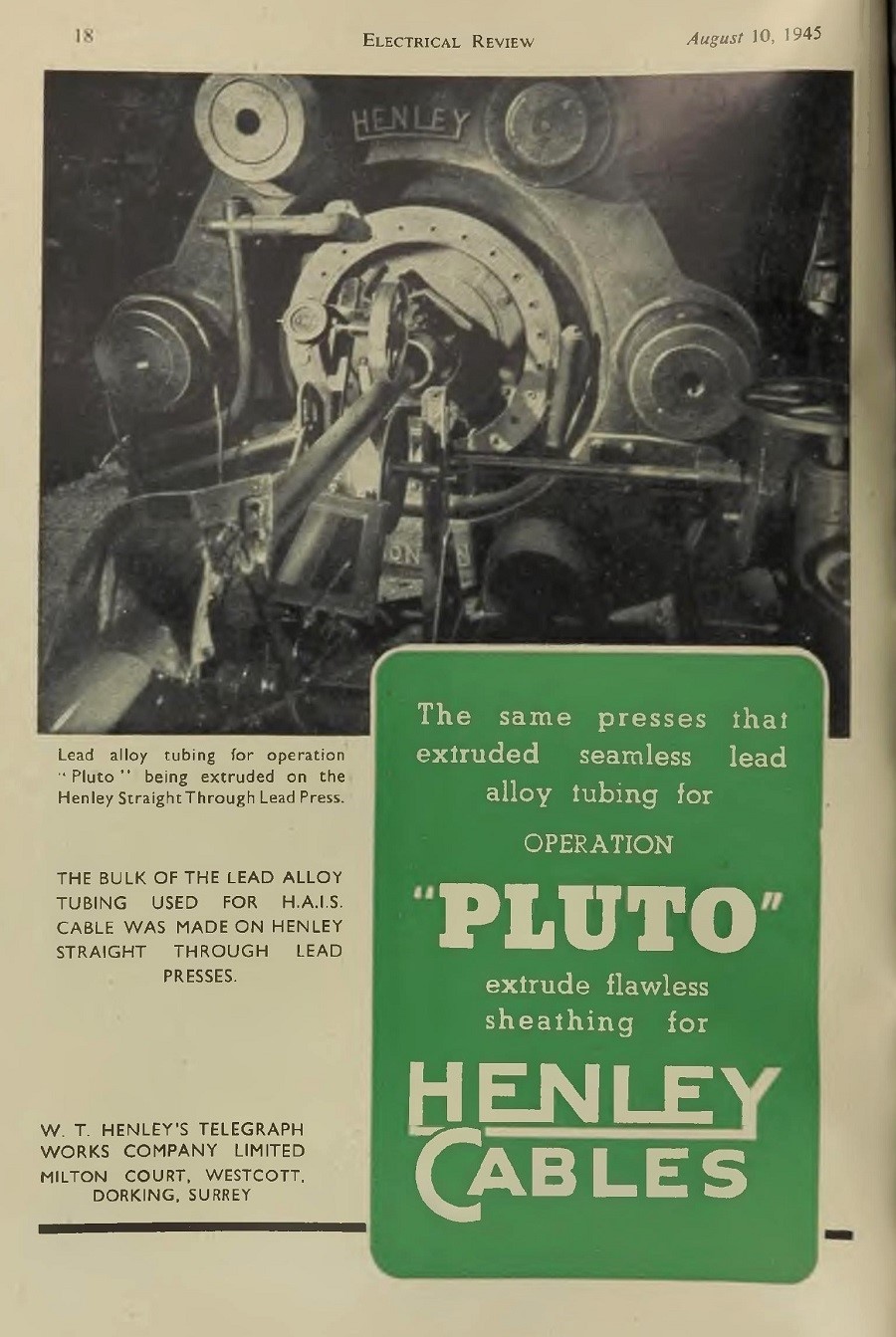 The Pipeline Under The Ocean (Pluto) was developed in WWII to provide fuel supplies from Britain to Allied forces in France.

The scheme was developed by Arthur Hartley, chief engineer of the Anglo-Iranian Oil Co.

Two types of pipeline were developed: first, the flexible HAIS pipe with a 3 inch diameter lead core, weighing around 55 long tons per nautical mile, essentially a development by Siemens Brothers, (in conjunction with the National Physical Laboratory) of their existing undersea telegraph cables. HAIS came from from Hartley-Anglo-Iranian-Siemens. This was a good start but it was soon apparent that the amount of lead required to produce enough pipe was going to be prohibitive. As a result, it was decided that an alternative would be needed that made use of cheaper and more readily available materials such as mild-steel.

The second type was a less flexible steel pipe of similar diameter, developed by engineers from the Iraq Petroleum Co and the Burmah Oil Co; it was known as HAMEL from the contraction of the two chief engineers, Henry Alexander Hammick and B. J. Ellis. The special tubes were made by Stewarts and Lloyds. It was discovered in testing that the HAMEL pipe was best used with final sections of HAIS pipe at each end. Because of the rigidity of the HAMEL pipe, a special apparatus, code-named The ConunDrum, was developed to lay the pipe. The 40-60 ft diameter Conun drums were pulled by tugs.

Merchant ships were adapted to lay the pipe; Johnson and Phillips provided special gear to handle and lay the pipe.

1942 A trial pipeline was laid across the Bristol Channel and was used to supply parts of Devon and Cornwall for the next year, during which time personnel were trained to use petrol pumping equipment in readiness for the invasion of Europe.

1944 After full-scale testing of a 45 nautical mile HAIS pipe across the Bristol Channel between Swansea in Wales and Watermouth in North Devon, the first line to France was laid on 12 August 1944, from Shanklin Chine on the Isle of Wight to Cherbourg. A further HAIS pipe and two HAMELs followed. As the fighting moved closer to Germany, 17 other lines (11 HAIS and 6 HAMEL) were laid from Dungeness to Ambleteuse in the Pas-de-Calais.