Grace's Guide is the leading source of historical information on industry and manufacturing in Britain. This web publication contains 149,254 pages of information and 234,224 images on early companies, their products and the people who designed and built them. 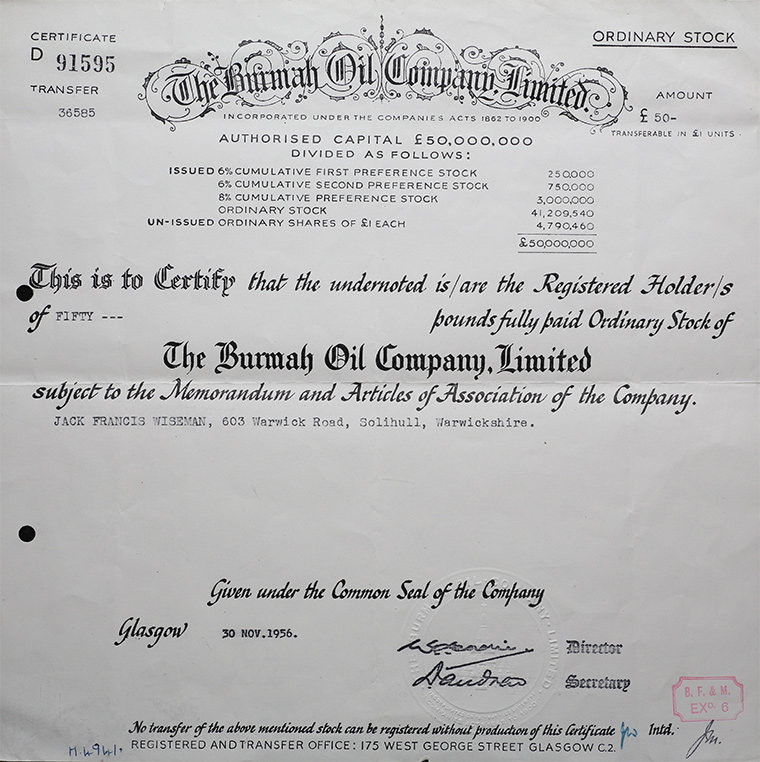 Carrying on business as producers, refiners, exporters and dealers in oil, paraffin wax, candles, and other oil products.

1876 David Sime Cargill, after visiting Burma, purchased the Glasgow-based Rangoon Oil Co Ltd, which had failed because the King of Upper Burma was using his monopoly power to overcharge for crude oil found in his territory.

Over the next ten years Cargill supported the loss-making refining and distribution activities from his own pocket, to the extent of £100,000.

1883 The Burmah Oil Company was registered to work concessions of oil-bearing lands in Burma and carry on business as refiners, exporters and dealers in oil products[1]

1886 After the Third Burmese War, the British authorities annexed Upper Burma, and granted Cargill prospecting licences in the oilfields there. Cargill introduced machine drilling and had the Rangoon refinery modernized to cope with the increased production.

1886 Cargill's Glasgow associates were highly sceptical about the company's prospects.

1904 The company demonstrated the value of Cargill's decisions by making £264,000 net profit and selling more than 2 million barrels of oil products, two-thirds of which comprised the cheap kerosene which kept Burmese and Indian lamps burning.

1905 John Cargill, David's son, contracted with the Admiralty to supply the Royal Navy with fuel oil from Rangoon. These dealings with Whitehall led to his company's being asked to support further exploration work by William D'Arcy's team in Persia.

Ultimately D'Arcy surrendered his interest in the whole venture, in return for 170,000 Burmah shares and the reimbursement of all his expenses.

1932 30th AGM was told that the Indian government was using the oil industry as a tax collector in the way that petroleum products were being taxed. Associated companies were the Assam Oil Co and the Tinplate Co of India as well as the Burmah-Shell Oil Storage and Distribution Co. Had made investments in the refinery. Holdings in Anglo-Persian Oil Co and Shell Transport and Trading continued to generate dividends[7].

1937 Producers and marketers of petroleum products. [9]

1942 The Japanese invaded Burma; the company's employees, on orders from Head Office, destroyed all of the productive assets in Burma, to deny them to the invading armies.

By 1963 owned the Barton refinery, Manchester

1965 Discussions continued with the government about compensation for the assets in Burma lost during the war.

1967 The name Burmah-Castrol was introduced for industrial products[11].

1972 Took-over Quinton Hazell, which would be complementary to the existing businesses Castrol and Halfords suppliers of automotive products and goods[13]

1972 The company owned 22 percent of BP as well as substantial holdings in Shell and Woodside-Burmah, giving the company substantial interests in oil and gas exploration and production; arguably the value of the other businesses was not reflected in the share price[14]

1975 As part of a rescue deal, partly caused by losses in the tanker business, the purchase of Signal Oil and the cost of N Sea investments, the government acquired most of the company's holding in BP shares; the company also sold some of its Shell shares[17]

1986 Sold several subsidiaries which were non-core: the chain of automotive cash and carry wholesalers to its management (Maccess Ltd); the oil and gas interests; Quinton Hazell, the Burma oil terminal and Rawlplug[21]

1990 The company was renamed Burmah-Castrol[22]

2000 Burmah-Castrol was acquired by BP Amoco.