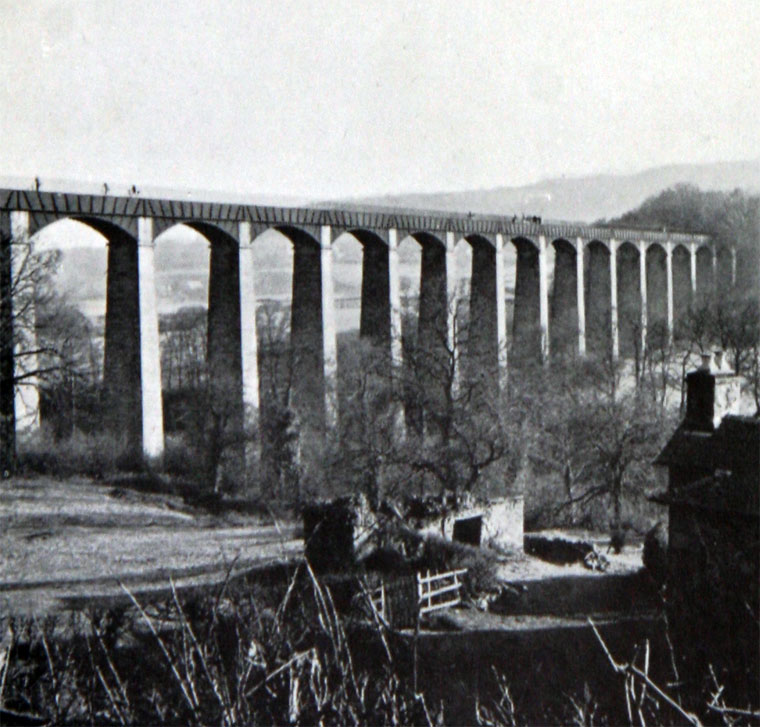 The piers are impressive for their height, slenderness, alignment, and quality of masons' work

Here we see how the panels are bolted to the sides of the outermost arch ribs. 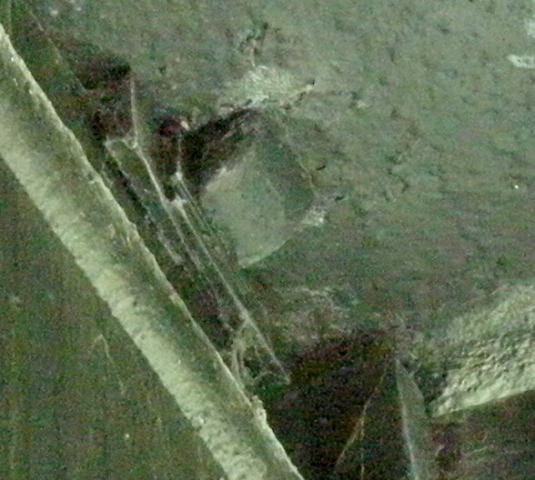 Detail from the above photo, showing lug on underside of floor plate with packers and wedges in the gap between lug and arch rib 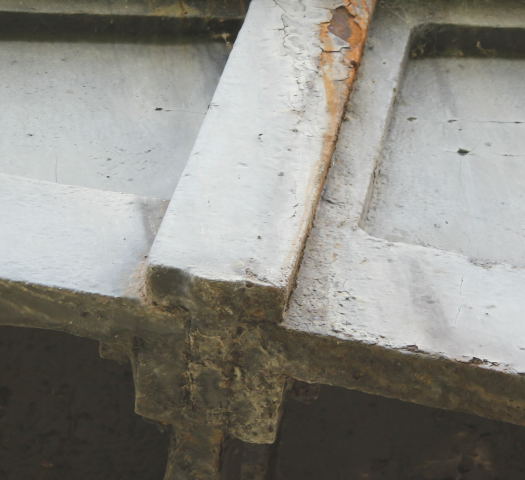 This shows the flanged sections of the arch ribs separated by, and bolted to, a transverse plate 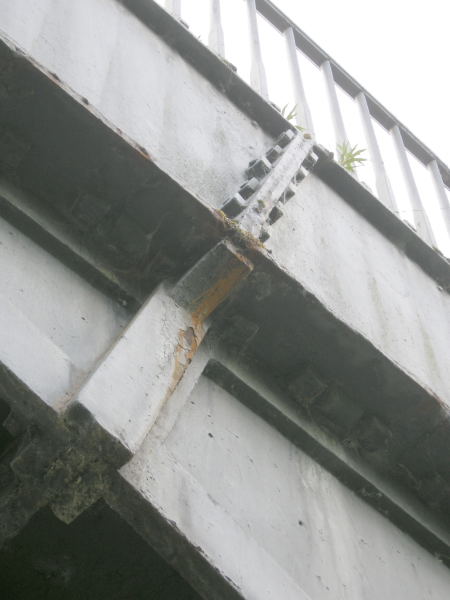 The Pontcysyllte Aqueduct is a navigable aqueduct that carries the Llangollen Canal over the valley of the River Dee in Wrexham in north east Wales.

Completed in 1805, it is the longest and highest aqueduct in Britain, a Grade I Listed Building and a World Heritage Site.

Despite considerable public scepticism, Telford was confident the construction method would work: he had previously built at least one cast iron trough aqueduct - the Longdon-on-Tern aqueduct on the Shrewsbury Canal, still visible in the middle of a field, though the canal was abandoned years ago. Part of what was originally called the Ellesmere Canal, it was one of the first major feats of civil engineering undertaken by Telford, by then a leading civil engineer, supervised by Jessop, the more experienced canal engineer. The iron was supplied by William Hazledine from his foundries at Shrewsbury and nearby Cefn Mawr.

The lime mortar used comprised lime, water and ox blood. The iron castings were produced at the nearby Plas Kynaston Foundry, Cefn Mawr, which was built for the purpose. The trough was made from flanged plates of cast iron, bolted together, with the joints bedded with Welsh flannel and a mixture of white lead and iron particles from boring waste.

The plates are not rectangular but shaped as voussoirs, similar to those of a stone arch. There is no structural significance to this: it is a decorative feature only, following the lines of the stiffening plates in the castings beneath.

The supporting arches, four for each span, are in the form of cast iron ribs, each cast as three voussoirs with external arches cast with an un-pierced web to give greater strength at the cost of extra weight. Using cast iron in this way, in the same manner as the stone arch it supersedes, makes use of the material's strength in compression. They also give an impression of greater solidity than would be the case were the webs pierced. This impression is enhanced by the arrangement of strips of thicker stiffening incorporated into the castings, arranged in the manner of joints between voussoirs. Cast plates are laid transversely to form the bed of the canal trough.

The trough is not fastened to the arches, but lugs are cast into the plates to fit over the rib arches to prevent movement. It was left for six months with water inside to check it was watertight. A feature of a canal aqueduct, in contrast with a road or railway viaduct, is that the vertical loading stresses are virtually constant.

The towpath is mounted above the water in the trough. This arrangement allows the water displaced by the passage of a narrow boat to flow easily around it, enabling relatively free passage. Pedestrians and horses once used for towing, are protected from falling from the aqueduct by railings on the outside edge of the towpath, but the holes in the top flange of the other side of the trough, capable of mounting railings were never used. The trough sides rise only about 6 inches (15 cm) above the water level, less than the depth of freeboard of an empty narrow boat, so the helmsman of the boat has no visual protection from the impression of being at the edge of an abyss. The trough of the Cosgrove aqueduct has a similar structure, although it rests on trestles rather than iron arches. It is also less impressively high.

Every five years the ends of the aqueduct are closed and a plug in one of the highest spans is opened to drain the canal water into the River Dee below, for inspection and maintenance of the trough.

The Wikipedia entry refers to 'external arches cast with an un-pierced web to give greater strength at the cost of extra weight. Using cast iron in this way, in the same manner as the stone arch it supersedes, makes use of the material's strength in compression. They also give an impression of greater solidity than would be the case were the webs pierced.'. In fact, in the outermost arches, the 6 largest of the 10 recesses in the flanks are pierced, but the holes are filled with separate cast iron plates bolted over from the inside. See photos. The smaller recesses might also have been pierced and filled, but if so, it is not clear how the filling plates are retained. The bolted filler plates appear to have been made light in weight, and are evidently not there to add strength. Perhaps it was thought that the pierced arches looked too slender in relation to the heavily-ribbed plates of the trough.

The trough's floor plates each have four flanges on the top side so that they can be bolted to each other and to the side plates.

Visitors (unless travelling by canal!) are advised to study the route to Pontcysyllte Wharf before setting out, as the road signs are less helpful than might be expected.