Drawing in Sandeman Museum in Porto 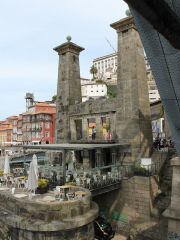 The masonry remains are now embodied in the Bar Ponte Pênsil 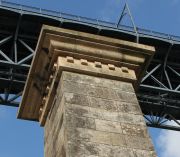 NOTE: ONLY THE MASONRY TOWERS ON THE NORTH BANK SURVIVE.

This bridge crossed the River Douro in the centre of Porto, and was demolished c.1887 following construction of the Dom Luiz 1 Bridge.

It was designed by Stanislas (Estanislau) Bigot and José Vitorino Damásio and constructed by Claranges Lucotte & Cie of France 1841-3.

A 23 page account of the design and construction was written by Bigot and published (in French) in 1843[1]. This includes the sources of the various materials. The majority of the iron castings came from England, while any additional castings found to be required during construction came from Messrs Hargreave & Co of Porto (presumably Bicalho Foundry (Porto). The iron forgings were obtained locally, but the iron itself was from Norway. The 'gros fers' were partly from France and partly from England. The iron wire came from Besancon.

The bridge is suspended from 8 cables, four on each side, each cable comprising 400 parallel wires of 3.2mm diameter, tied at regular intervals by several turns of a thinner wire. The wires were coated with 'l'huile de houille' (a form of coal tar) and assembled into cables in a nearby boatyard. Bigot's description mentions 8 'cylindres de friction' and 8 support plates: these presumably sat on top of the piers and supported the cables, allowing thermal expansion.

A brief but valuable description and history is available online (in Portuguese)[2] [3]. This refers to concerns arising about the safety of the bridge following failures of the similar suspension bridges at Angers in 1850 and at La Roche-Bernard in 1852. Regular inspections of the Maria II bridge were initiated, and no significant problems were found. However, concerns eventually arose about the possibility of corrosion of the iron wires in the embedded and uninspectable locations.

See here, for 19th century photographs of the bridge, with its replacement being constructed alongside.