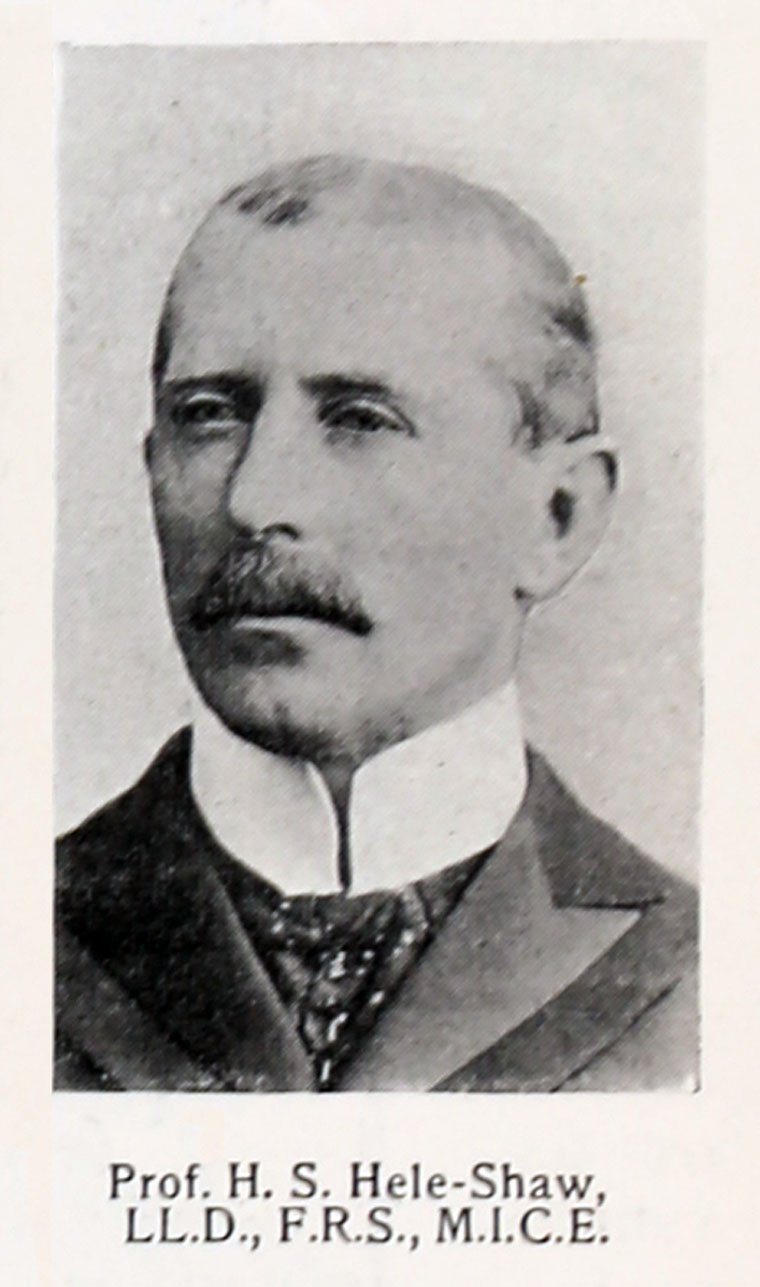 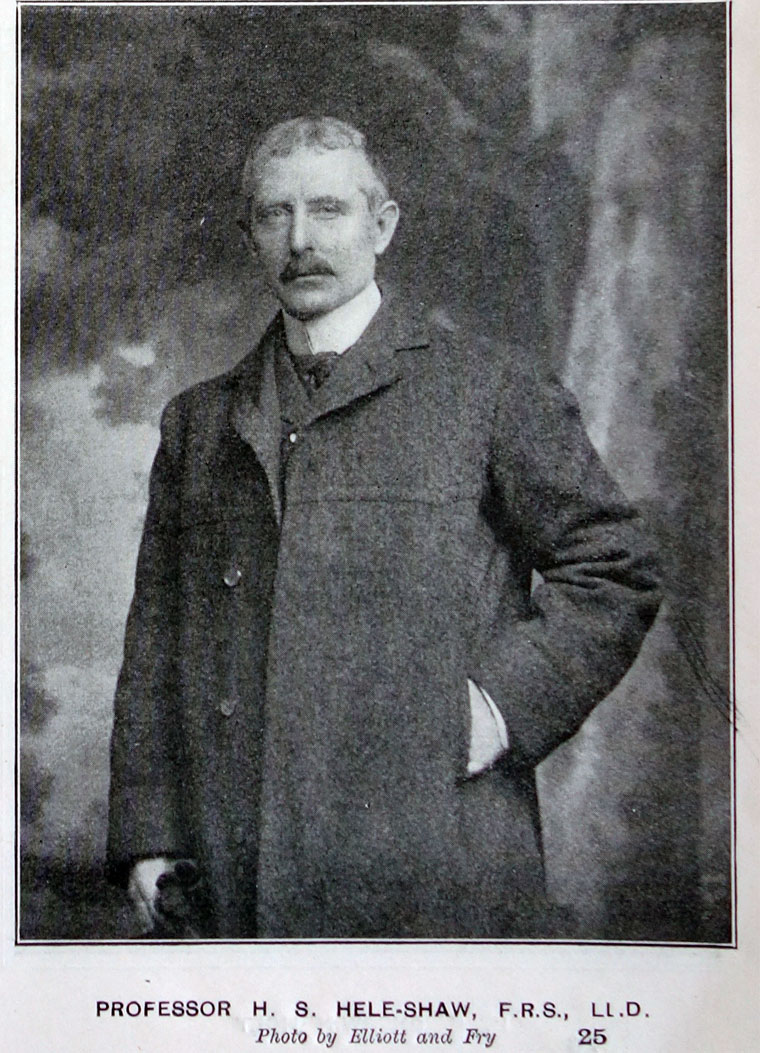 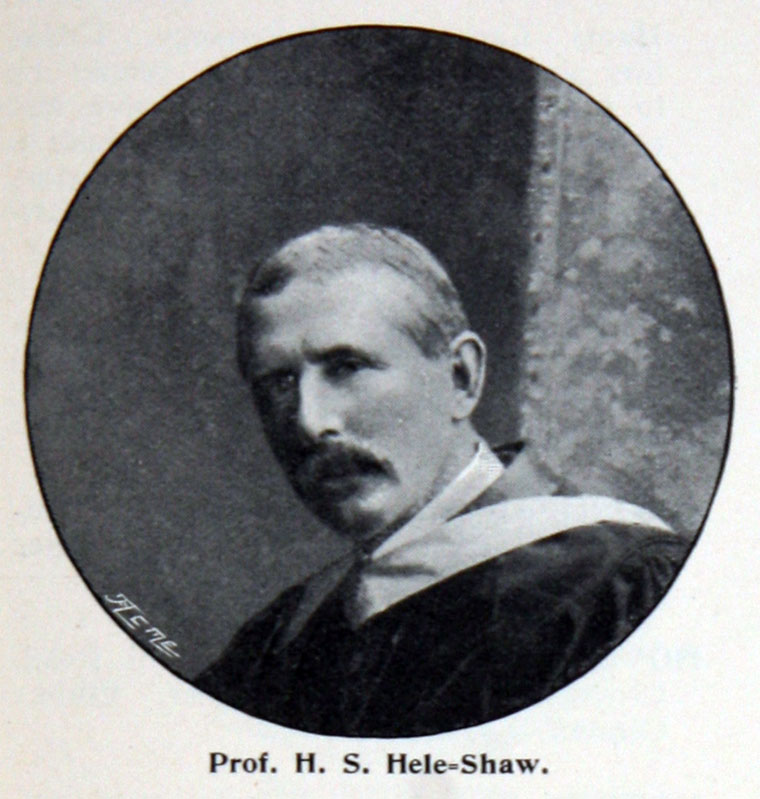 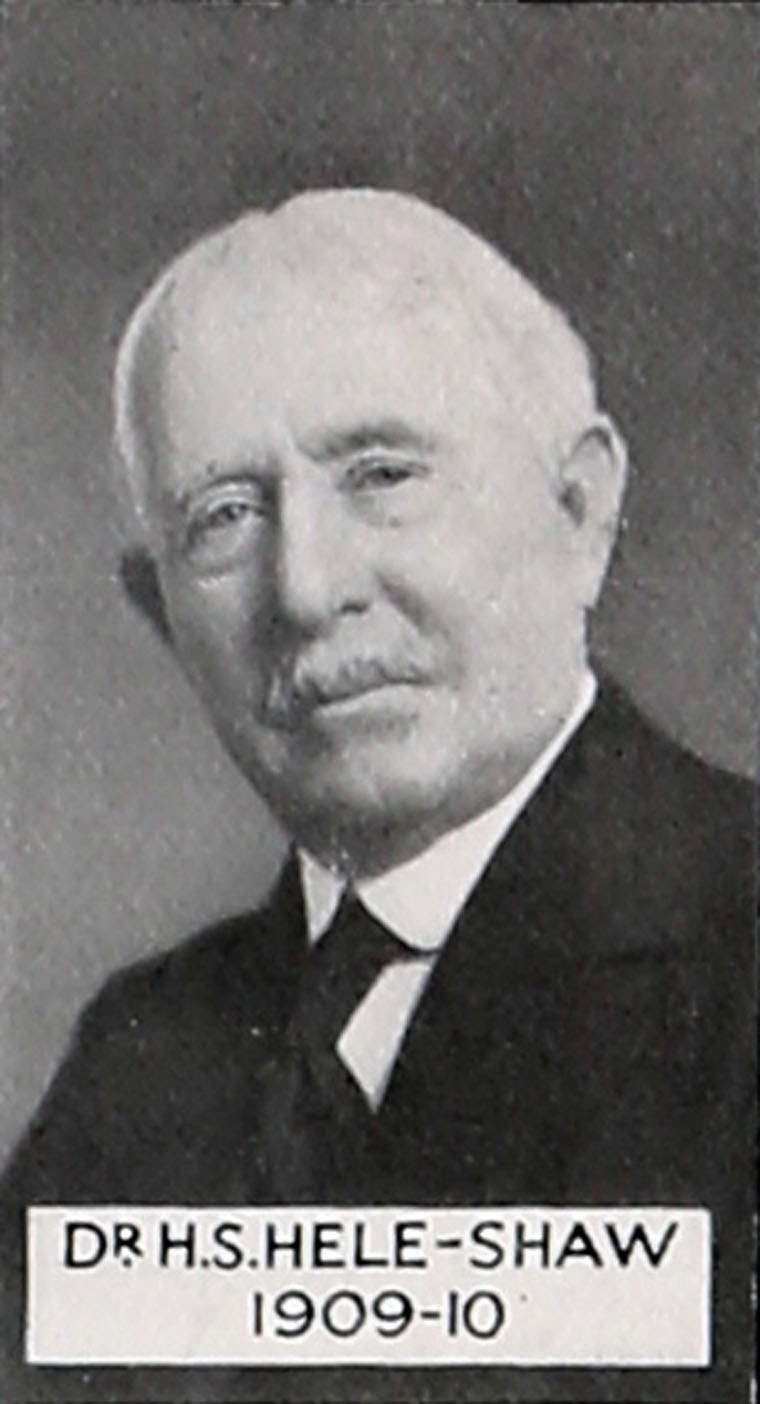 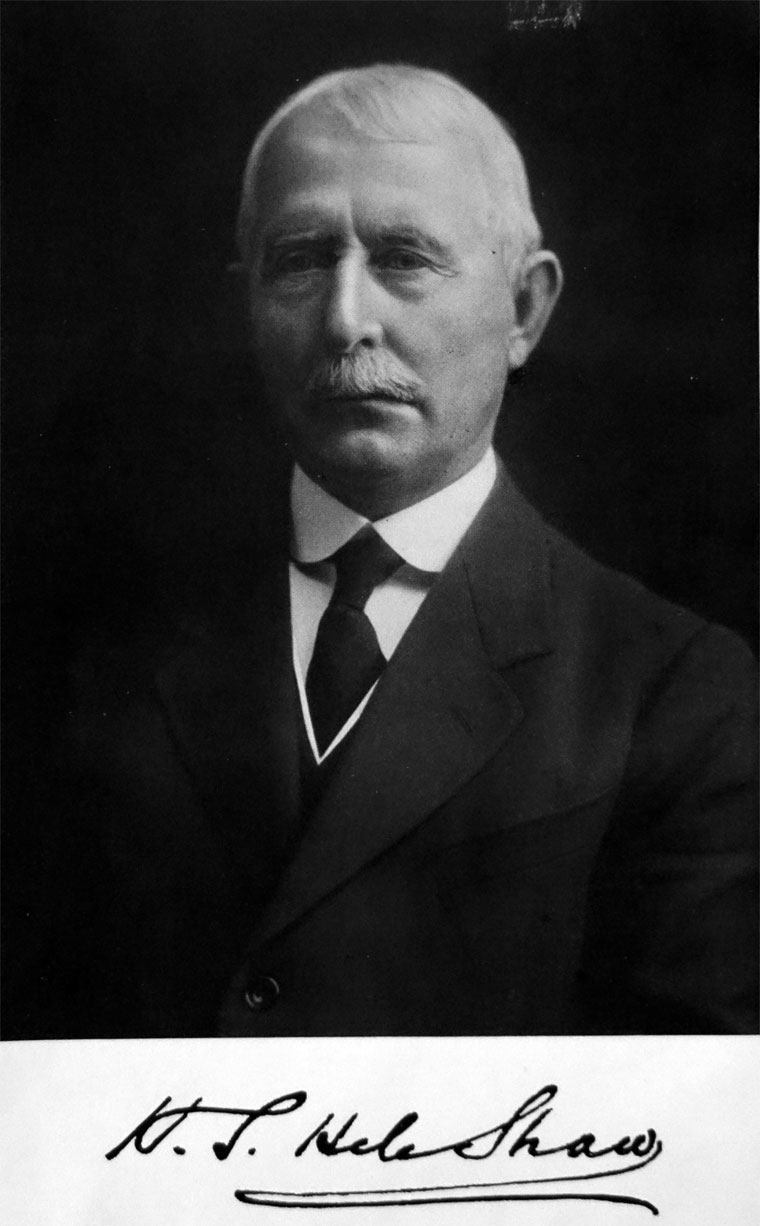 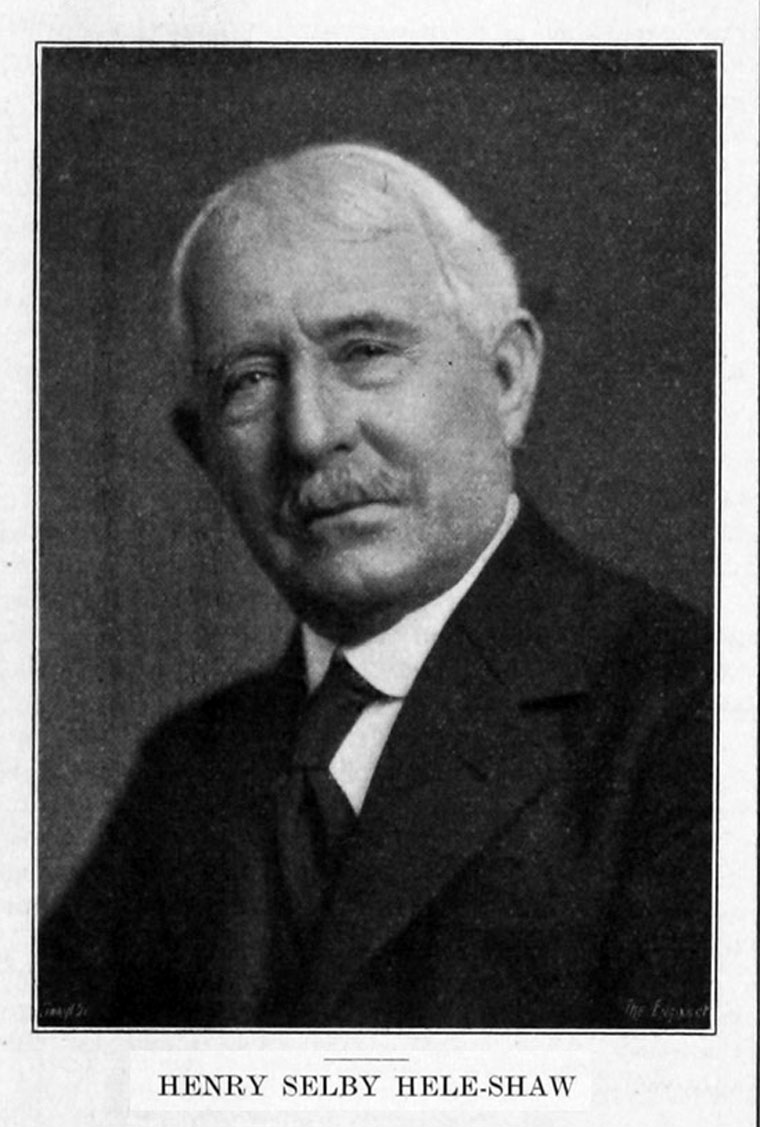 1854 Born at Billericay, Essex, on 29 July 1854, the eldest of the thirteen children of Henry Shaw, a solicitor, and his wife, Marion, daughter of Henry Selby Hele, vicar of Grays, Essex.

Shaw was privately educated, and at the age of seventeen was apprenticed to Rouch and Leaker in Bristol. Indenture bound H. S. Hele-Shaw to Edwin Rouch of the Mardyke Iron Works, City of Bristol, to learn the trade of millwright and mechanical engineer for the period of three years back-dated to 29 July 1872. Signed by H.S.Hele-Shaw, his father Henry Shaw, Edwin Rouch and William Robert Howard Leaker as parties to the agreement. Witnessed by Samuel Peake, mine proprietor of Shrewsbury; William Thompson; and Richard H. Leaker, engineer of Clifton[2]

1876 He obtained the first of a number of Whitworth prizes, enabling him to become a student at University College, Bristol.

On obtaining his degree in 1880, Hele-Shaw was appointed lecturer in mathematics and engineering in his own college at Bristol, and in 1881 he became the first professor of engineering there. He was then only twenty-seven.

1883 Wrote-in to The Engineer from Bristol University College about 'Flying Machines'. [4]

1885 He became the first occupant of the chair of engineering at the University College of Liverpool.

1890 He married Ella Marion (d. 1947), daughter of Samuel Greg Rathbone, of the famous Liverpool family. They had one son, who was killed in the First World War, and one daughter.

1904 Hele-Shaw accepted an invitation to initiate a college of engineering at the Transvaal Technical Institute, of which he became principal within a year.

His inventions cover a wide range, beginning in 1881 with several instruments for the measurement and recording of wind velocities, and proceeding next by a logical development to the field of integrating machines.

1896 the Locomotives on Highways Act opened an entirely new field to British engineering, and in the early years of the motor industry he was in touch with every problem that arose. He acted as judge in almost every trial, and the famous Liverpool trials on commercial motor vehicles in 1897 were organized by him. He invented a number of important devices, including a friction clutch which at one time was fitted to the majority of motor vehicles.

1911 Listed as a visitor at the Mermaid Hotel, Rye (age 56 born Billericay), an Engineer.

Hele-Shaw retired to Ross-on-Wye in Herefordshire at the age of eighty-five and died there, at the Cottage Hospital, on 30 January 1941. He was survived by his wife.

HELE-SHAW, PROFESSOR H. S., LL.D., F.R.S.- Born at Billericay July 29th, 1854, he has been Harrison Professor of Engineering in University College, Liverpool, since 1885, when the Chair was founded, Member of the Inst. C.E., Inst. of M.E., and Chairman of the Liverpool Self-propelled Traffic Association. Amongst his pastimes outside automobilism is golfing. Professor Hele-Shaw joined the Club on February 20th, 1899, and has been on the Club Committee since then, and on the Judges' Committee of the Richmond Show in 1899, the Glasgow trials of 1901, the 1000 miles trials of 1900, and the September Reliability Trial of last year. He has repeatedly rendered great services to the Club and the movement. As recently as the tyre trials, the last held by the Club, he gave considerable time to the testing of competitors' tyres.

HENRY SELBY HELE-SHAW, LL.D., D.Sc., D.Eng., F.R.S., Wh.Sc., was an old and distinguished Past-President of the Institution, of which he had been a Member for nearly three-quarters of his long life. He achieved great eminence in many different fields of engineering, particularly in experimental research, and as an inventor and a leading figure in engineering education. In the Institution, which he supported throughout his career with characteristic vigour and enthusiasm, his most important work was the part he played in launching the National Certificates Scheme.

Dr. Hele-Shaw, who was born at Billericay, Essex, in 1854, was educated privately, and at the age of seventeen he was articled to Messrs. Rouch and Leaker, at the Mardyke Engineering Works, Bristol. After completing his apprenticeship in 1876 he gained the Senior Whitworth Scholarship, which enabled him to study at the University of Bristol. He also gained valuable Whitworth Prizes during the years 1877-9, and these successes led to his appointment as "assistant to the professor of mathematics and engineering", as his position was worded on his Proposal Form for Membership of the Institution, dated 1879.

In 1881 he was promoted to be first professor of engineering at the University of Bristol; only four years later, however, he went to Liverpool University College as first professor of engineering and occupied the Harrison Chair until 1894. During these years he worked with great energy to set the engineering faculty on a more permanent foundation and was largely instrumental in establishing and equipping the Walker Engineering Laboratories. In 1886 he delivered four Cantor lectures on the subject of friction. It was at Liverpool, too, that he carried out his famous experiments in the streamline flow of liquids, based on investigations of liquid flow between parallel glass plates; the conclusions he then reached formed the basis of a subsequent research which he carried out with Dr. Alfred Hay, on the distribution of lines of force in a magnetic field; their joint findings were published in 1900.

Shortly after relinquishing his position at the University of Liverpool, in order to devote his time to consulting work and the development of his own inventions, he turned his attention to mechanically propelled vehicles. In 1897 he organized the well-known series of trials for heavy commercial vehicles for the Liverpool Automobile Club, and the Self-Propelled Traffic Association, and he was a founder member of the Royal Automobile Club. In addition he was keenly interested in the transmission elements of the motor car, and one of his most important inventions was the multiple-disk clutch, described in a paper which he delivered before the Institution in 1903. There is little doubt that this early interest in motor car transmission systems gave rise to his inventions in connection with hydraulic variable-speed gear.

But in other directions also his inventive genius was turned to such diverse applications as integrating mechanisms, pumps, steering gear and balanced rudders, and the "Victaulic" pipe joint. In 1899 he was elected a Fellow of the Royal Society for his work on streamline flow. Subsequently he applied his discoveries in this sphere to the streamline filter which formed one of his most successful inventions. Much of his research work was described in technical papers read before various scientific bodies, including the Royal Institution, the Academie des Sciences, and the British Association; of the latter, he was president of Section G in 1915.

In 1903 Dr. Hele-Shaw was appointed first Professor of Civil, Mechanical, and Electrical Engineering at the Transvaal Technical Institute, of which he became principal in the following year. The Secretary of State for the Colonies appointed him, in 1905, Organizer of Technical Education in the Transvaal. On returning to England two years later he again commenced to practise as a consulting engineer, and established his office in Westminster. With Professor Unwin, he was retained as a consultant for the Vyrnwy Dam. From this time onwards he gave up much of his time to the affairs of the Institution, and rendered extremely valuable services on various committees. He served as a Member of Council from 1909 until 1920, when he became a Vice-President; and in the same year he delivered the Thomas Hawksley Lecture on "Power Transmission by Oil". In 1922 he was elected President and it is significant that his Presidential Address dealt chiefly with engineering invention, education, and research.

The original proposals of the Board of Education which were made to the Institution early in 1921 were only for the joint endorsement of local Certificates; and it was Dr. Hele-Shaw who put forward the alternative of a national Certificate, thus bringing into being the scheme which has become the pattern for other branches of technology and commerce and for similar schemes in Scotland and Northern Ireland, and has also developed into one of the main channels of qualification for membership of the Institution. Dr. Hele-Shaw became the first chairman of the Joint Committee appointed by the Board and the Institution to administer the scheme, and held this position till 1937.

To mark the termination of his active work he enabled the Council to found the annual "Hele-Shaw National Certificate Prize", to which. the Council added the "Hele-Shaw Medal" to perpetuate their appreciation of his part in the scheme. Almost to the end of his life he continued to develop a large number of his own inventions, and among the most important of these may be mentioned the variable-pitch airscrew, in which the inclination of the blades can be varied to assist an aeroplane when quick starting and climbing is desired; or the inclination of the blades can be reduced for economical cruising at high speed. This invention was acquired by the Government, and in October 1940, after the great aerial battles with the German air force over this country, Dr. Hele-Shaw received commendation on the material way in which his variable-pitch airscrew had contributed to the British success in the aerial war.

Dr. Hele-Shaw continued to work at his London office until 1939; then, at the age of 85, he retired to Ross-on-Wye, Herefordshire, where his death occurred on 30th January 1941.

"...Dr. H. S. Hele-Shaw on January 30th at the age of eighty-six closes a long career spent in furthering the education of engineers, in scientific research work, and in the development of numerous inventions. Dr. Hele-Shaw was widely known in engineering circles throughout the country. The news of his death will be received with sincere sorrow, but it is impossible not to temper our regrets with the reflection..."More.

Henry Selby Hele-Shaw was born in 1854 and in 1876 obtained a Senior Whitworth Scholarship and was subsequently awarded the Watt Gold Medal and Telford Premium of the Institution of Civil Engineers.

He had been associated with the Institution since 1906 and was elected President for the Session 1909-10.

Further details of his career were published in the Journal for March, 1941.