Completed and under construction. 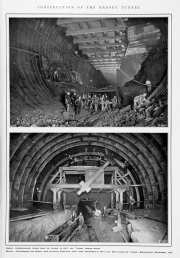 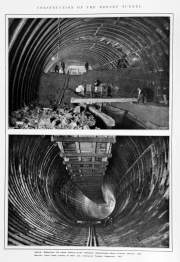 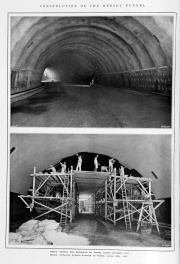 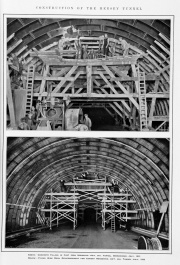 Guide pointing out location of the George's Dock building, at the NW corner of the former dock 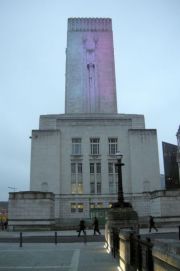 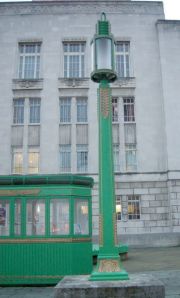 2018. Lamp and one of the original payment kiosks 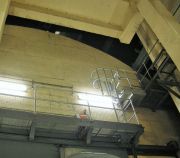 2018. This photo hints at the size of the reinforced concrete fan housing

2018. Vertical shaft fan. For maintenance it is moved sideways on rails, while its sister fan takes its place over the ventilation shaft.

2018. Underneath the roadway, originally intended for trams. The spaces behind the side walls are used to introduce fresh air at roadway level

The Queensway Tunnel is a road tunnel under the River Mersey, between Liverpool and Birkenhead. It is often called the Birkenhead Tunnel, to distinguish it from the newer Kingsway Tunnel, which serves Wallasey.

1820s The first tunnel crossing was proposed in 1825 and, again in 1827. A report in 1830 rejected the road tunnel due to concerns about building damage.

1886 The first tunnel constructed under the River Mersey was Mersey Railway Tunnel.

During the 1920s there were concerns about the long queues of cars and lorries at the Mersey Ferry terminal so, once Royal Assent to a Parliamentary Bill was received, construction of the first Mersey Road Tunnel started in 1925, to a design by consulting engineer Basil Mott.

Mott supervised the construction in association with John Brodie, who, as City Engineer of Liverpool, had co-ordinated the feasibility studies made by consultant Engineers Mott, Hay and Anderson. The main contractor was Edmund Nuttall.

In 1928 the two pilot tunnels met to within less than an inch.

The tunnel entrances, toll booths and ventilation building exteriors were designed by architect Herbert James Rowse, who is frequently but incorrectly credited with the whole civil engineering project. These are Grade II listed buildings. More than 1.2 million tons of rock, gravel, and clay were excavated; some of it used to build Otterspool Promenade. Of the 1,700 men who worked on the tunnel during the nine years of its construction, 17 were killed.

At the time of its construction it was the longest underwater tunnel in the world, a title it held for 24 years. The tunnel, which cost a total of £8 million, was opened on 18 July 1934 by King George V; the opening ceremony was watched by 200,000 people.

By the 1960s, traffic volume had increased to the extent that a second tunnel was needed, and in 1971 the Kingsway Tunnel was opened to relieve congestion.

Queensway tunnel is 2.01 miles long. It contains a single carriageway of four lanes, two in each direction. Different height restrictions apply to the nearside and offside lanes in each direction, because of the curvature of the tunnel. These are 13 feet and 15.6 feet respectively, and there is a 3.5 ton weight limit for goods vehicles.

All buses are required to use the offside lane, regardless of their height. Lane signals (consisting of an illuminated green arrow or red cross) are displayed at regular intervals, although in normal circumstances none of the lanes are currently used bidirectionally. This is in contrast to the Kingsway Tunnel, where lanes in toll concourse are alternated to prioritise higher traffic in one direction during peak hours.

The tunnel has two branches leading off the main tunnel to the dock areas on both sides of the river. The Birkenhead branch tunnel (known as the Rendel Street branch) was closed in 1965. The Liverpool branch tunnel remains in use, in the exit direction only. It emerges opposite the Liver Building, next to the Atlantic Tower Hotel and Church of Our Lady and Saint Nicholas. Originally, it carried two-way traffic and the junction inside the tunnel was controlled by traffic lights, but this arrangement was discontinued to reduce the delays brought on by increasing traffic levels.

When driving through the tunnel, it appears as semi-circular. It is circular, however, and the area below the roadway is known as Central Avenue. The roadway acts freestanding. The area beneath the roadway was planned to house an electric tram route, but it was instead used to house a gas pipe, which was later abandoned.

The above information is from Wikipedia.

'The Story of The Mersey Tunnel Officially named Queensway'

A 110-page book with the above title was published in 1934 on the occasion of the official opening. A high quality facsimile may be purchased during the tunnel tours (see below). This gives an excellent description of the tunnel and its construction, and includes the contemporary adverts placed by suppliers and contractors. Some information from this source is given below.

Much of the tunnel was lined with cast iron segments (see black and white photographs above). Over 100,000 segments were supplied by the Stanton Iron Works, their weight exceeding 80,000 tons. The mating faces were machined to a high degree of accuracy. Tapered segments were needed to accommodate curves.

The largest fans were supplied by Walker Brothers. Metropolitan-Vickers supplied the fan motors and switchgear, the motors driving the fans through David Brown gearboxes. The fans and gearboxes continue in use today, but with more modern motors. Other fans came from Sturtevant Engineering Co.

Merseytravel run excellent 'behind the scenes' guided tours, starting in the George's Dock building. Informative and highly entertaining guides reveal fascinating facts about the construction and operation of the tunnel, and take visitors to see enormous ventilation fans in action, and descend to watch the traffic in the tunnel, and then go below the roadway into the air supply duct and the under-road tunnel originally intended for use by trams. See here and here.

The 2018 photographs on this page were taken on a tunnel tour.