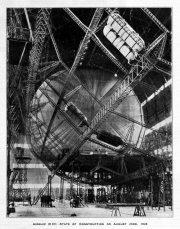 The R101 Airship was a British airship that crashed on October 5, 1930, in France, during its maiden overseas voyage, killing 48 people.

1924 The R101 was the result of a British government initiative to develop airships. The Imperial Airship Scheme was proposed as a military project able to carry 200 troops or five fighter aircraft. This was expected to require an airship of 8 million cubic feet a figure well beyond current designs. As a result, the two prototype airships of 5 million cubic feet were to be constructed. To increase the development of new ideas, two different teams would be used: one, under the British Government's Air Ministry, would build the R101, and the other would be a subsidiary of the private company Vickers, which would build the R100 under contract for a fixed price. Among Vickers' engineers were the designer Barnes Wallis, later to become famous for the bouncing bomb and Nevil Shute Norway, as Chief Calculator (Stress Engineer)

1926 The building of the R101 began at the Royal Airship Works at Cardington in Bedfordshire. The frames themselves were built by Boulton and Paul in Norwich and transported to Bedfordshire for assembly.

Due to a failed attempt to create hydrogen-powered engines and several other new design concepts, the project's completion was delayed from 1927 to 1929. The R101 was meant to have a useful lift of 60 tons but ended up only able to carry 35 tons.

1930 The stability of the R101 was doubtful, due to the insufficient span of its fins into the air-stream. During its flight at the Hendon air show in 1930, it almost plunged to the ground, as well as repeatedly going into a dive during the return flight. Its gas bags also developed numerous leaks. The gas bag valves were of a novel design and placement. They showed a tendency to open slightly as the ship rolled thus causing a continual leaking of lifting gas and leading to constant decrease of lift in flight. Despite this, it was given a Certificate of Airworthiness. Engineers lengthened the frame, added another gas bag, reversed propellers, and replaced the outer cover. After that, the ship was 777 ft long with a total volume of 5.5 million cubic feet and a useful lift of just under 50 tons.

At completion she was the largest flying craft ever built, surpassing the LZ 127 Graf Zeppelin, which was of similar length but only 3.7 million cubic feet in capacity. The LZ 129 Hindenburg would surpass her in five years at 804 feet long and 7 million cubic feet.

The passenger accommodation was spread over two decks within the envelope and comprised 50 passenger cabins for one, two or four people, a dining room for 60 people, two promenade decks with windows down the sides of the ship and even an asbestos-lined smoking room for 24 people. Most of the passenger space was on the upper deck with space for the crew, kitchens and washrooms and the smoking cabin on the lower. The R101 was fitted with five heavy diesel engines made by William Beardmore and Co.

The Air Ministry pressured the engineers to finish the project. The final trial flight of the R101 was originally scheduled for September 26, 1930 but an unfavourable wind delayed it until October 1. She returned to Cardington after a flight of 17 hours.

The R101 departed on October 4 at 6:24 p.m. for its intended destination to Karachi (then part of British India) via a refuelling stop at Ismaïlia in Egypt under the command of Flight Lieutenant Carmichael Irwin. Passengers included Lord Thomson, Secretary of State for Air, Sir Sefton Brancker, Director of Civil Aviation, and Squadron Leader William Palstra, RAAF air liaison officer (ALO) to the British Air Ministry. The airship had to drop 5 tons of water ballast to lift off.

Over France, the R101 encountered gusting winds that tore back the outer covering, exposing and rupturing the first gas bag. The R101 crashed into a hillside near Beauvais, north of Paris, at only 13 mph. The crash ignited the leaking hydrogen and fire quickly engulfed the entire airship. 46 of the 54 passengers and crew were killed. Two men who survived the crash died later in a hospital bringing the total to 48 dead. One of the survivors was Harry Leech

The Court of Inquiry concluded that there was evidence that there had been a failure of the outer cover of the upper nose. This it was postulated led to the destruction of a gas bag loss of the flammable hydrogen lifting gas and causing the nose to drop. The R101 had exhibited severe longitudinal instability in previous flights, and due to a unique design feature – the lack of any wire bulkheads to prevent gas cell surging – they had been seen to move back and forth during flight. The exact source of ignition was never determined.

1931 Scrap contractors salvaged what they could of the R101 wreckage, continuing through 1931. The Zeppelin Company purchased 5 tons of duralumin from the wreck.

The R101 spelled the end of the British attempt to create lighter-than-air aircraft. Its competitor, the R100, despite a more successful development programme, and a safe transatlantic trial flight, was mothballed immediately after the R101's crash and sold for scrap in 1931.

Obituaries of the victims of the Airship R101.[1]