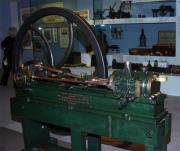 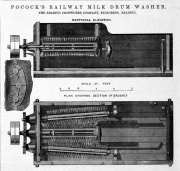 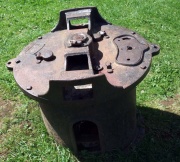 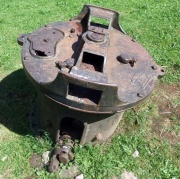 1820 Thomas went bankrupt, leaving Joseph on his own until 1825, when he took George Barrett as his partner (Perry and Barrett). This new firm began to manufacture ploughs to meet a growing demand from the farmers of Berkshire for better, more scientifically designed ploughs.

1841 The Reading firm won its first award from the Royal Agricultural Society of England for one of its ploughs.

1842 Charles Andrewes was brought into the partnership and the firm became Barrett, Exall and Andrewes.

c.1840 the firm began to make threshing machines and winnowing machines. The first time one was exhibited at the Royal Show was 1843. Thereafter, these machines became one of the most important parts of the company’s production.

1851 At the 1851 Great Exhibition, Barrett, Exall & Andrewes had one of the largest displays of threshing machinery, horse gears and related implements.

1858 George Barrett died; his memorial is made of cast iron.

1864 Expansion of the business necessitated increasing the size of the Katesgrove foundry in Reading, and when the need for further capital reorganization arose, the firm was converted from a partnership into a limited company, the Reading Iron Works Ltd, in 1864.

The market for agricultural implements and machines was changing, and the firm started to move into steam and general engineering. They were said to have made the first set of steam ploughing equipment on the ‘roundabout’ principle in 1849, although did not continue with that line.

By the end of the 1870s the firm was making losses.

1882 Awarded a Silver Medal at the 1882 Royal Agricultural Show for their machine for washing railway milk cans.[3]

Although Reading Iron Works engines gained a good reputation, they faced very stiff competition, especially in international markets. At the same time, problems with managerial succession made it difficult for the firm to challenge the competitors.

1887 Failed to appear at the Smithfield Show. The firm had a reputation for a conservative approach to their products and their designs changed little over time[4]