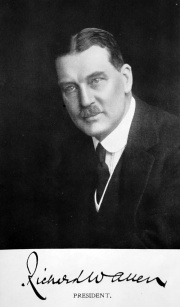 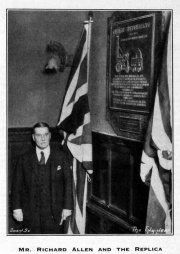 1931. Mr. Richard Allen with a Replica of the Plaque which hangs on the wall of George Stephensons' Cottage. 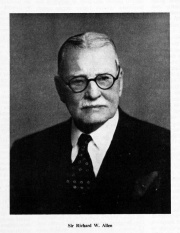 He was apprenticed for four years at W. H. Allen and Co, the firm of his father, William Henry Allen. At the works in Lambeth, he spent time in the pattern shops, foundry, turnery, erecting shop and drawing office.

After completing his education he spent time as a draughtsman with John Elder and Co, Glasgow, and with the Naval Construction and Armaments Co., Barrow in Furness. After visiting the United States in 1890, he returned to W. H. Allen and Co. as Assistant Manager.

In 1894, when the company’s works were transferred to Bedford, he became a partner and subsequently Managing Director.

He was mainly concerned with the design and construction of auxiliary machinery for naval and mercantile marine vessels, but was also interested in a wide variety of engineering projects on land.

He was President of the Institution of Mechanical Engineers in 1928.

ENGINEERS in many fields, the engineering industry and many technical institutions have suffered a great loss by the death of Sir R1chard W. Allen, which occurred on Sunday, July 17th, and his death will be keenly felt by W. H. Allen, Sons and Co., Ltd., the engineering firm of which he was chairman. His passing breaks another link with the pioneering days: it means the loss of a notable leader and worthy successor to his father, William Henry Alien, the founder and first chairman of the company which bears his name, and which has taken a leading part in the development of mechanical, electrical and hydraulic engineering.

Sir Richard, who was in his eighty-ninth year, had spent nearly seventy years in the engineering industry and was well known by the Engineers-in-Chief of the Fleet, the leading British shipbuilders and the leading personalities in the shipping industry. However, although closely associated with the design and construction of auxiliary machinery for naval and merchant ships, Sir Richard was interested in many land engineering projects which covered such items as pumping schemes for land drainage and irrigation, water supply and sewage disposal, as well as generation of electrical power in various stations and in industrial plant at home and abroad. Such wide interests were in character with the tradition of his company, which has been engaged in the design and construction of pumping and power generating machinery since it was founded in 1880.

Sir Richard, who was the eldest son of William Henry Allen, was born at Cardiff on February 1, 1867, and was educated at Christ College, Finchley, London. His technical education was the responsibility of Dr. Gisbert Kapp, who, with others, did much to place dynamo design on a sound scientific basis.

Later, Richard Allen served an apprenticeship with W. H. Alien and Co., which his father had founded at York Street, Lambeth, and there he passed through the various shops. In those days the main business of the firm was centrifugal pumps, but the development and production of mechanical and electrical products in combination was already under consideration. Soon the company was manufacturing a wide variety of engineering products, including steam engines, electric generators and motors, and these activities provided invaluable experience for Sir Richard.

He widened his experience by spending two years - 1887 and 1888 - in the drawing-office of John Elder and Co., now the Fairfield Shipbuilding and Engineering Company, Ltd., on the designs of marine engines.

This was supplemented by a further eighteen months with the Naval Construction and Armaments Company, now Vickers-Armstrongs, Ltd., at Barrow in Furness, where, in addition to work on marine engines, he assisted in the laying out of new engine and boiler works.

There followed a short period of service at sea as an engineer on board the Cunard liner S.S. "Etruria," and then in 1890 he went to the United States, where he paid visits to works engaged in shipbuilding, electrical engineering and tramway construction.

On his return to England he became assistant manager in the York Street works under his father. These were now proving inadequate to deal with the increasing volume of business and the site was sold to the London and South-Western Railway Company, to become what is now Waterloo Station.

By 1894, Mr. W. H. Alien had transferred the business to the Queens Engineering Works, Bedford, and, at the same time, made his son a partner, and the firm became known as W. H. Alien, Son and Co.

On moving to Bedford, Sir Richard became managing director of the company and continued as such until the death of his father in 1926, when he took over the duties of chairman, duties which he fulfilled for the next twenty-nine years. Both as managing director and chairman, Sir Richard travelled the world and visited many countries on behalf of his company, and on one of his world tours represented the Universities of Cambridge and London, and the Institution of Mechanical Engineers at the 1929 Tokyo World Engineering Congress.

In 1916 he was elected a member of the Institute of Marine Engineers and was also a member of many other societies, including the Iron and Steel Institute, the Institute of Metals, and the Royal Aeronautical Society. He delivered many papers covering a number of subjects, being awarded the Telford Premium by the Institution of Civil Engineering in 1906; they included the following: "Surface Condensing Plants and the Value of the Vacuum Produced," "Pumping Machinery in the Fens," "Irrigation Pumping Machinery (Gezira Scheme), Sudan," "Improved Designs of Tee Pieces and Bellmouths for Suction Pipelines of Pumping Plant in Floating Dock," " Air Supply to Boiler Rooms," and "The Application of Steam Turbines to Auxiliary Machinery."

Auxiliary machinery and equipment for naval and merchant vessels was Sir Richard's special engineering interest, and he designed and patented air supply equipment for the warship boiler-rooms, and his book The Air Supply to Boiler Rooms for Modern Ships of War ran into three editions.

Sir Richard Allen had a keen interest in technical and scientific education and was concerned with the training of all those who passed through the works under the Alien system. Many leading bodies consulted him upon this question of education, including the London County Council for the Robert Blair Fellowships. Although actively engaged in the direction of his company he found time to take part in the affairs of both town and county, of which he was Deputy Lieutenant, a Justice of the Peace, and High Sheriff of Bedfordshire. He was awarded the C.B.E. in 1918 and for his many and valuable services he was honoured with a knighthood in 1942.

Sir Richard, throughout his life, took a particular interest in the training of young men. During his chairmanship of Allens, the apprentice training scheme which his father had started was steadily improved. The firm, largely as a consequence of the interest he took in the matter, was amongst the leaders in recognising how circumstances were changing and how a more conscious effort to give young men an adequate training was becoming necessary. Very soon after the first world war the premium system was dropped. A supervisor was appointed whose whole attention was given to apprentices' affairs. The work that an apprentice did, the length of time he spent in any shop or at any bench, was no longer solely controlled by the foreman. A definite policy was adopted of sending out apprentices upon outside erection jobs, sometimes, indeed, in sole charge of them! Sir Richard laid special emphasis upon the need for young men to be able to express themselves publicly in speech, and his encouragement was always particularly ready for the apprentices' society before which papers were read which the apprentices were expected to discuss. Prize schemes were devised and the awards were made not only for exhibition of skill in the works, but taking into account also recreational abilities, powers of self-expression and sense of responsibility.

Sir Richard, like his father before him, was a benevolent autocrat. He belonged to a generation that had never heard of "Labour Relations" or "Joint Industrial Councils," and the like. He saw to it that those who worked at Aliens were healthy, well fed, well housed and had adequate means of recreation. In return he expected and received loyalty to the firm and respect for himself. He believed, indeed, that he knew better than the men themselves what was good for them and it is more than possibly true that he did, for even during the years of the great depression Allens was a happy works.

At intervals Sir Richard, like a monarch, would make a ceremonial progress through the works attended by a retinue of executives. Upon entering each shop he was "received" by its foreman, who discussed with him work in progress and any difficulties or troubles he was experiencing. Sir Richard would then walk slowly round. He knew all the older hands and would greet them by Christian name and ask about their wives and families. Had anyone a complaint to make now was the time to make it. Given the courage - it required a full measure of it! - anyone could approach Sir Richard and, providing the thing was done respectfully, make his plaint. At once it would be inquired into and, if possible, settled on the spot.

Times have changed. In these more democratic days such methods would no longer work. Men will no longer rely upon the benevolence of so autocratic a figure as Sir Richard. Yet it is worth remembering that Sir Richard was known to his men, though not to his face, affectionately, as "Dickie."

Sir Richard William Allen, C.B.E., D.L., whose death occurred on 17th July 1955 at the age of 88, was a Past President of the Institution (1928) and an Honorary Member. He had been Chairman of W. H. Allen, Sons and Co., Ltd., Bedford, since the death, in 1926, of his eminent father, William Henry Allen, the founder and first Chairman of the company.

He was born at Cardiff on 1st February 1867 and educated at Christ College, Finchley. His technical education was given privately. Subsequently, he was apprenticed for four years to his father's firm W. H. Allen and Co., Lambeth, and passed through the pattern shops, foundry, turnery, erecting shop and drawing office. He added further engineering experience as a Draughtsman with John Elder and. Co., Glasgow (now the Fairfield Shipbuilding and Engineering Co.) from 1887 to 1888, and with the Naval Construction and Armaments Co., Barrow-in-Furness (now Vickers-Armstrongs, Ltd.) from 1888 to 1890. After a visit to the United States of America in the autumn of 1890 he returned to W. H. Allen and Co. in the capacity of Assistant Manager. In 1894 when the company's works were transferred to Bedford he became a partner and, subsequently, Managing Director.

Sir Richard travelled extensively during his period as Managing Director and Chairman of the company and, on one of his round-the-world journeys, served as a British delegate representing the University of Cambridge, the University of London and this Institution at the World Engineering Congress held in Japan in 1929.

Sir Richard took an active part in local affairs and was at one time Deputy Lieutenant for the County of Bedford, a Justice of the Peace, High Sheriff of Bedfordshire and a member of Bedfordshire County Council.

He was elected a Member of the Institution in 1900 and an Honorary Member in 1933.