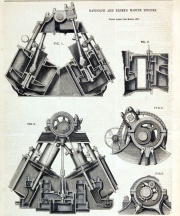 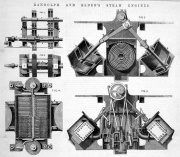 Randolph, Elder and Co of Govan.

In 1834 Charles Randolph started his own firm of millwright engineers in Centre Street, Glasgow[1].

1852 John Elder joined as a partner and started making marine engines, a sideline that was to supersede the original work.

1853 In January 1853 they took out a patent for 'an arrangement of compound engines adapted for the driving of the screw propeller. The engines are vertical, direct-acting and geared. The pistons of the high and low pressure cylinders move in contrary directions and move diametrically opposed cranks with a view to diminution of strain and friction'

1854 First application of a compound engine to steam ship propulsion[2].

Made Whitelaw and Stirrat water turbines under licence.[3]

1865 See 1865 Clyde Shipbuilders for detail of the tonnage produced by Randolph, Elder and Co.

1870s The yard mainly made liners for a number of Far Eastern and Australasian companies, many of which went on to have long term associations with the yard, as well as 55 warships between 1870 and 1909[8].

1875 A letter setting out the achievements of John Elder was published in The Times demonstrating that the company name of John Elder and Co was certainly in use at this date[9].

1876 Won contract for three engine and boilers for Admiralty corvettes.

1878 Launched the first of 6 corvettes from the Fairfield Yard, Govan[10].

1885 John Elders became the Fairfield Shipbuilding and Engineering Co; suffering from the depression in trade, launched only one quarter of the average of Clyde yards by tonnage (c.9000 tons)[12].