Grace's Guide is the leading source of historical information on industry and manufacturing in Britain. This web publication contains 138,145 pages of information and 223,038 images on early companies, their products and the people who designed and built them. 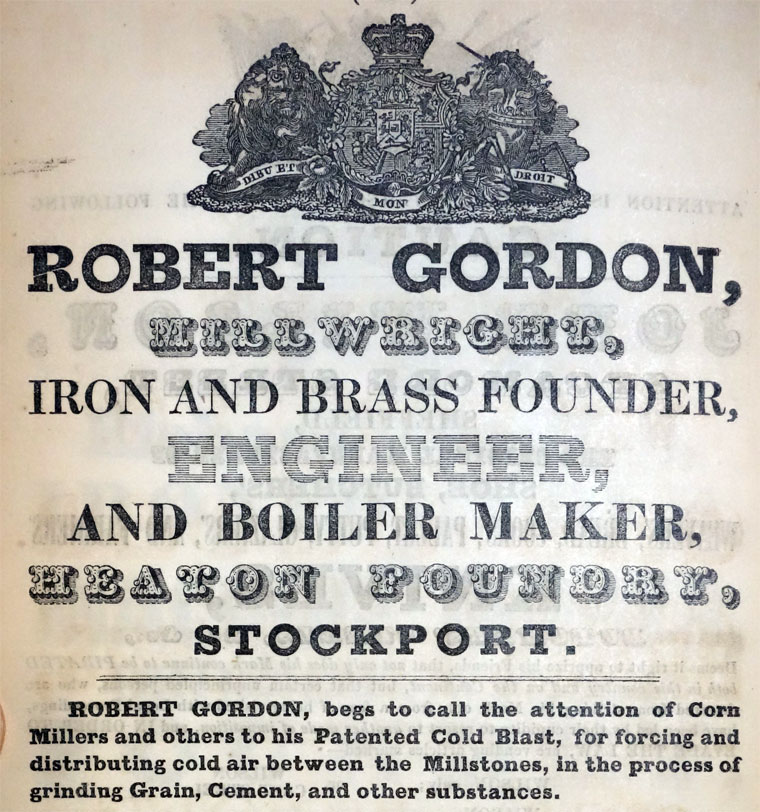 1844 Patent registered by Robert Gordon, of Heaton Foundry, Stockport, millwright and engineer, for improvements in grinding wheat and other grain, and in dressing flour or meal ; which improvements grinding are also applicable to grinding cements and other substances. Sealed 30th April—6 months for inrolment. [1]

1856 'DESTRUCTIVE FIRE AT STOCKPORT. SERIOUS DAMAGE. Between twelve and one o'clock on Tuesday morning, a fire took place in Stockport, the glare from which illuminated the whole of the town, and caused many hundreds of persons to rise from their beds, and hurry eagerly to the place from whence the light proceeded. The scene of the disaster was the extensive works of Messrs. Robert Gordon and Co., ironfounders, engine builders, millwrights, and boiler makers, situate in Gordon-street, and occupying an elevated position on Lancashire Hill, Stockport. The fire was discovered to be raging in the pattern room, a little before twelve o'clock, by the private watchman, who immediately caused an alarm to be given. The premises consist of a large foundry on the north side, and on the south, ranging parallel with Gordon-street, is a building (separated from the foundry by a yard) thirteen windows in length. This building consisted of two storeys and an attic. The ground and second storeys were occupied by lathes and various tools employed by the engine makers and millwrights; the attic contained a vast number of patterns, many of them very valuable. It was at the east end of this pattern-room that the fire was first discovered; and, from the combustible nature of the dry wood of which the patterns are made, the progress of the flames was very rapid.

'Intelligence had been dispatched to the police-office, and Mr. Cunningham, the superintendent of the borough fire brigade, hastened to the place with an engine and body of men, two engines following. Mr. Thorley, who has the control of the engine belonging to the West of England Fire Office, also promptly arrived, the reflection in the sky having led to a preparation of the engine. When the first engine arrived, the roof at the eastern end was so far burned through as to be falling in. The engines were got into action, and a tolerable supply of water was obtained, some drawing from the street mains, and others from pumps, or other available sources. The fire made irresistible progress along the attic and the second storey.

'The whole of the roof was consumed, and also the floor of the attic. The lathes and other tools in the second room were exposed to the fire from end to end. and the floor fell in for about one-third of the length from the part where the fire commenced. In the ground storey, at this point, was the counting-house. The utmost efforts were made by the superintendent of the West of England brigade to preserve this office and the books it contained. Fortunately their endeavours were successful. At one time the fire threatened to involve the new foundry in its ruin, one corner of the roof having ignited, but by the assistance of the workmen, were attended in force to render their aid, the incipient mischief was arrested. About three o'clock the fire ceased to spread, partly from the water thrown upon it, and, in a great measure, from much of the wooden material being consumed. None of the proprietors were at Stockport when the misfortune occurred, Mr. Gordon being in London, and another partner being abroad. It is not, therefore, easy to form a correct estimate of the amount of damage, or to know the extent to which it may be covered by insurance. It is stated, however, by those well acquainted with the contents of the pattern-room, that the loss in that department will be from £4000 to £5000; and to this must be added a serious amount of damage to the lathes and tools. Between 200 and 300 men were employed at the works, most of whom are now, by this destructive fire, thrown out of employ.'[3]

Is this the Heaton Foundry which was later owned by Emmerson, Murgatroyd and Co?