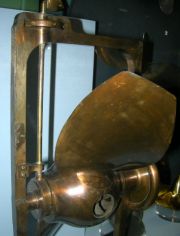 1868 patent model of variable pitch propeller, adjustable from inside the ship, on display at the London Science Museum, 2007

We regret to announce the death, on the 16th inst., at his residence in Ledbury-road, Bayswater, of Mr. Robert Griffiths, "the father of screw propellers," as Captain Bedford Pim once called him.

Mr. Griffiths was the son of a farmer near Bodfari, a parish in the vale of Clwydd, North Wales, where he was born December 13th, 1805.

At a very early age he began to display a decided mechanical turn, and he was taught the trade of a carpenter. After working for some time at Rhyll, he removed to Birmingham, where be found employment as a pattern maker, but in a short time he was enabled to start in business for himself as a machine maker.

In 1836 he took out a patent for a machine for making rivets, screw blanks, and bolts, and in the following year he patented, in conjunction with John Gold, a very ingenious machine for grinding glass.

In 1836 he appears as the patentee of a nut-making machine, and in 1845 be patented another machine for making bolts, spikes, and rivets. The bolt and nut machines were highly successful, though the inventor himself, as often happens, failed to reap any very substantial benefits.

It is stated that a Mr. Alcock, who took the rivet works when Mr. Griffiths left, made no less than £60,000 in a very few years, and we believe that we are correct in stating that Mr. Griffiths' inventions laid the foundation of the important nut and bolt industry of the town.

From Birmingham he migrated in 1845 to Havre, where he started an engineering workshop and ironfoundry in conjunction with a Mr. La Bruyere. The concern prospered for a time, and some work was executed for a railway then in progress in the neighbourhood. Political troubles caused the business to fall off, and eventually the works were closed.

Whilst at Havre his attention became directed to atmospheric railways, from which great results were expected at that period, and he took out two patents in 1845 and 1846 respectively, relating to the subject. He was associated in these ventures with the late Mr. George Hinton Bovill, whose name is well known in connection with improvements in corn grinding machinery.

We have now arrived at the time when Mr. Griffiths commenced to investigate the subject with which his name is indissolubly connected, the improvement of the screw propeller, his first patent being dated September 13th, 1849. We understand that some of his early experiments were directed to the determination of the loss of power which would ensue by increasing the size of the boss for the purpose of giving additional strength. To his surprise he found that no such loss as he had anticipated took place, and this led him to a discovery which was totally opposed to all the then received notions. The experiments were made in conjunction with Mr. Bovill, who, in July, 1852, read a paper on the subject before the Institution of Mechanical Engineers in Birmingham.

Instead of continuing the blades of the propeller down to the shaft, and keeping the boss as small as possible, one-third of the diameter was filled up by a sphere. In the experiments which Mr. Griffiths and Mr. Bovill made it was ascertained that the centre part of the blade of the ordinary screws absorbed 20 per cent. of the power, without having any propelling effect, in consequence of that part of the blades - especially in coarse pitched screws - being nearly in a line with the shaft, the effect being when working to hurl the water off by its flapping and centrifugal action at right angles to the shaft, and seriously disturbing the more solid water upon which the more effective portion of the screw should act. Further improvements in the screw were embodied in two patents granted in 1853.

Shortly after this patent was taken out, Mr. Griffiths left Havre and settled at Bristol, where the first trials were made with the improved propeller. It was also tried in London and at Liverpool. In March, 1853, experiments were made by the Admiralty at Portsmouth with the Royal yacht Fairy, to which one of the new screws was fitted. In June of the same year the Peninsular and Oriental Company took the invention up, and made experiments with it on the Cadiz. The details of these experiments will be found in the Mechanics' Magazine of the day.

As an instance of Mr. Griffiths' ceaseless inventive activity we may mention that whilst at Bristol he found time to devise and patent an electric hair brush and comb.

About this time he was employed by Messrs. Swayne and Bovill, at Briton Ferry, to superintend the rolling of a particular kind of wrought iron chair or sleeper for a foreign railway in which they were interested.

In 1853 he came to London, and for ten years or so he resided in Mornington-crescent, closely occupied with introducing and improving his screw propeller.

His next move was to Chester, and thence, shortly afterwards to Rhual Issa, near Mold, where be became the principal proprietor of a colliery, and commenced the manufacture of paraffine oil from shale. This enterprise was not successful, being ruined by the large importations of crude petroleum from America, and Mr. Griffiths retired from the concern a considerable loser. He returned to London again and concentrated hie energies on the screw propeller, his numerous improvements being duly recorded in the patent lists.

During the later years of his life he turned his attention to methods of protecting screws; and his "protector" was tried on the Bruiser at Plymouth, in 1875, with very satisfactory results. It formed the subject of a Parliamentary paper in the following year. It consists of two concentric rings firmly attached, the larger one being in advance of the smaller. They are fastened at the top and bottom to the screw frame, so that the forward edge of the smaller ring is opposite the middle of the propeller. Experiments have shown that the efficiency of a screw propeller is increased by this "protector."

Mr. Griffiths has contributed several papers to various societies, the last of which was perhaps that read at a meeting of the Royal United Service Institution in April, 1881, on "Recent Experiments in Screw Propulsion." In that paper he enlarges upon the importance of placing the propeller a considerable distance aft of the stem post.

He also wrote a pamphlet in 1860, entitled "The Screw Propeller: What it is and what it ought to be," and "A Description of Griffiths' Improved Patent Screw Propeller, with its Recent Improvements under Patent No. 319, February 20th, 1858."

Such is an imperfect and somewhat superficial sketch of the career of a very remarkable man, whose inventions have exercised an important influence upon the subjects to which they relate. It is to be hoped that a fuller record of his work may be compiled by those who have been more closely associated with him.

Mr. Griffiths leaves a widow and a son, the latter of whom has been for some time connected with his father in engineering pursuits.