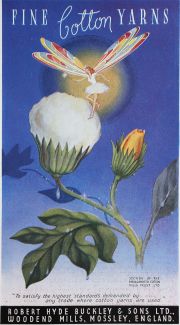 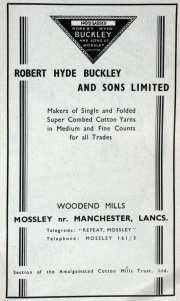 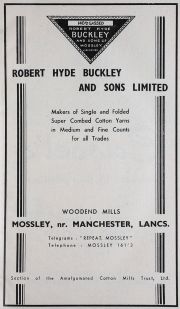 1848 Robert Hyde Buckley built Woodend Mill along side the canal and river Tame, close to his father’s mills. [1]

Mossley was then known as the town of three counties - Yorkshire, Lancashire, and Cheshire - and was thriving in cotton production during the latter part of the 19th century right up to the cotton famine in the 1930’s.

1861 Even with the outbreak of civil war in the United States, and constant threats to raw cotton supplies due to attempted Northern blockades from Southern ports, investments in new cotton mills continued.

By 1884, Mossley was the tenth most important cotton spinning town in the country and nearly half of this production was controlled by three major companies, John Mayall, George Mayall and Co, and Robert Hyde Buckley and Sons Ltd.

In the 1890s, the cotton industry was having difficulties and this had devastating affects on Mossley, which saw some of the larger firms close in 1896.

1899 Woodend Mill continued to suffer even more due to the opening of new and more modern mills at Carrhill and Milton mill.

WWI. Despite the war, trade was reasonably healthy although cotton mills were being built in India and by 1914 this was taking almost 40% of Lancashire’s cotton exports.

Post-WWI. Just after the war, there was a surge in demand, prices rocketed and created a boom but this was short-lived as the Great Depression came in 1930.

Post-WWII. At the end of the Second World War, there were only three firms that remained in production in Mossley.

1950s Despite the post-war boom, trade rapidly decreased in the early '50s and continued to spiral until its closure in 1959.

Robert Hyde Buckley and Sons carried on working at Copley Mill, Stalybridge, until 1974.

The neighbouring Carrhill Mill was the last remaining mill in Mossley to continue trading until the late 1990s, as a wool spinning Mill.

The mills have been restored and are now rented as artists' studios. Woodend Mill still has all the characteristics of a 19th century cotton mill and is one of only a few that remain in Mossley and Saddleworth to house these sorts of trades, unlike most that have been demolished or turned into accommodation.