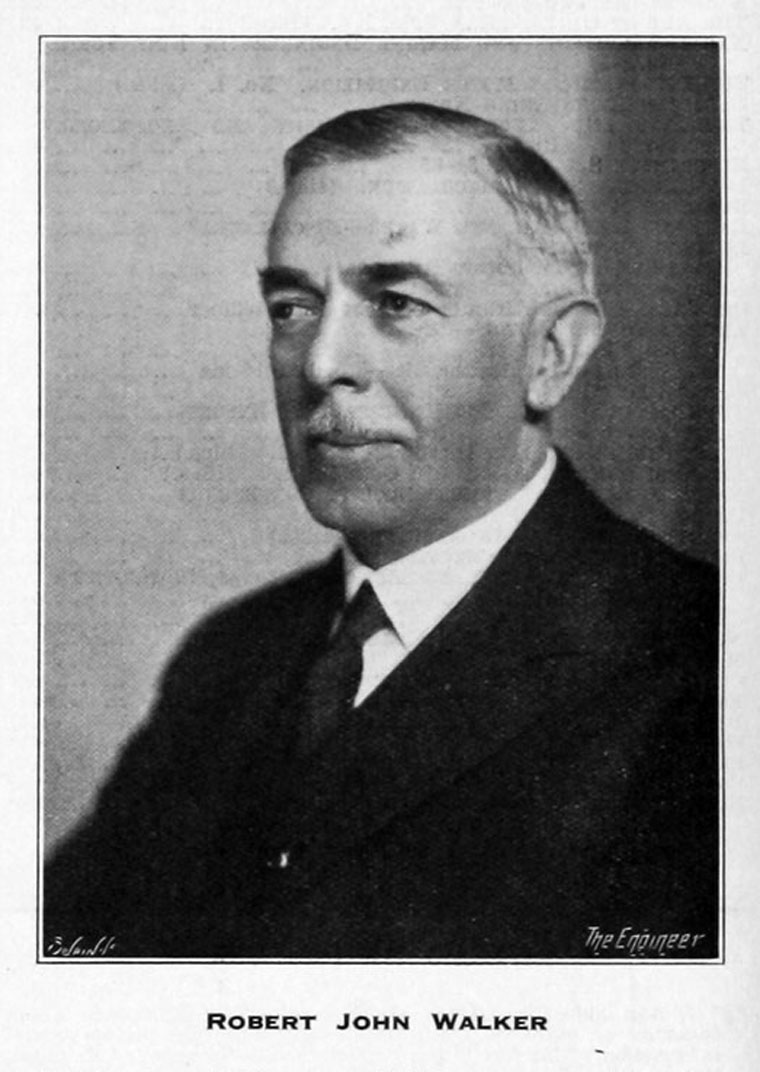 OUR marine engineering readers, both at home and abroad, will learn with sorrow of the death, following an illness which lasted many weeks, of Mr. Robert John Walker, the chairman and managing director of the Parsons Marine Steam Turbine Company, Ltd., of Wallsend-on-Tyne. Mr. Walker, who was only sixty-five years of age, died on Sunday last, October 18th, at his home, Kingsmead, Riding Mill.

He was born in Sunderland on December 23rd, 1870, and after completing his schooling was apprenticed at the age of eighteen in the shipyard of William Doxford and Co., Ltd., shipbuilders and engineers, of Pallion Yard, Sunderland. After serving in the various branches of the shipyard he was appointed a member of the designing staff.

In 1896 he obtained first-class honours in the naval architecture examination of the Science and Art Department at South Kensington. About this time Mr. Walker was appointed lecturer in naval architecture in the Sunderland evening science schools and became chief of the designing and theoretical department of Doxford's shipyard.

Between 1896 and 1899 he was engaged in the development of the distinctive type of cargo ship designed by William Doxford and Co., Ltd., and the design of two of the early torpedo-boat destroyers for the Admiralty, which had at that time been entrusted to the Sunderland firm. This experience eminently fitted him for the important position he was called upon to occupy in 1899, when the Hon. Charles Parsons selected him as the naval architect of the Parsons Marine Steam Turbine Company, Ltd., which was then newly formed.

In his paper on "The Development of the Marine Steam Turbine During the Past Fifty Years " - see THE ENGINEER of August 2nd, 1935 - he outlined the progress made since the epoch-making "Turbinia" installation of 1897. The machinery of the British destroyer "Acheron" was, he said, a culminating point in high-pressure marine turbine design applied to warship service, the fuel consumption working out at 0·608 lb. of oil per S.H.P. hour for all purposes. We may recall Mr. Walker's contribution to mercantile high-pressure practice in the Clyde steamer "King George V" and his later collaboration with Mr. John Johnson in the machinery of the Canadian Pacific steamships of the "Duchess" and "Empress" classes and the more recent development of the Simplex turbine unit for cargo carrying ships in 1920. His services to marine engineering during the war were recognised when he was made a C.B.E.

Mr. Walker was a valuable member of several scientific institutions and was a Vice-President of the Institution of Naval Architects, a Past-President and Fellow of the North-East Coast Institution of Engineers and Shipbuilders. His contributions to discussions and his papers were always looked forward to with the greatest of interest, as coming from an authority on steam engineering. He was a Past-President of the North-East Coast Engineering Employers' Association and an Assistant at the Court of the Worshipful Company of Shipwrights, also for some time chairman of Turbine Steamers, Ltd., of Glasgow. His place among marine engineers will be a difficult one to fill, and we feel sure that his death, at a comparatively early age, will be keenly felt by all who knew him.

Born in Sunderland in December, 1870, Mr. Walker, at the age of 18, entered the service of the Wear firm of William Doxford and Sons, Ltd., Shipbuilders and Engineers, where he served an apprenticeship in the various branches of shipbuilding.

In 1896 he was appointed Lecturer in Naval Architecture at the evening schools in Sunderland, and in the same year was appointed chief of the Designing and Theoretical Department at Doxford's shipbuilding yard.

He joined the Parsons Marine Steam Turbine Company in 1899 as naval architect for the then newly formed Company, and, seven years later, was appointed Joint Managing Director with the late Sir Charles Parsons.

Mr. Walker was associated with the development of the marine steam turbine from its first installation in the steam yacht Turbinia, and in his subsequent close collaboration with the late Sir Charles Parsons, both in the practical work of demonstrating the possibilities of the marine turbine and in his lectures and papers given before technical and other societies in this and other countries, he contributed largely to the present-day success of this wonderful propelling agency.

Early in 1920 Mr. Walker was created a Commander of the Order of the British Empire for special services in connection with war work. He was a Past-President of the North-East Coast Institution of Engineers and Shipbuilders, Past-President of the North-East Coast Engineering Employers' Association, for some time Chairman of Turbine Steamers, Ltd., of Glasgow, and was an Assistant on the Court of the Worshipful Company of Shipwrights.

He was elected a member of the Institute of Metals on December 30, 1918.