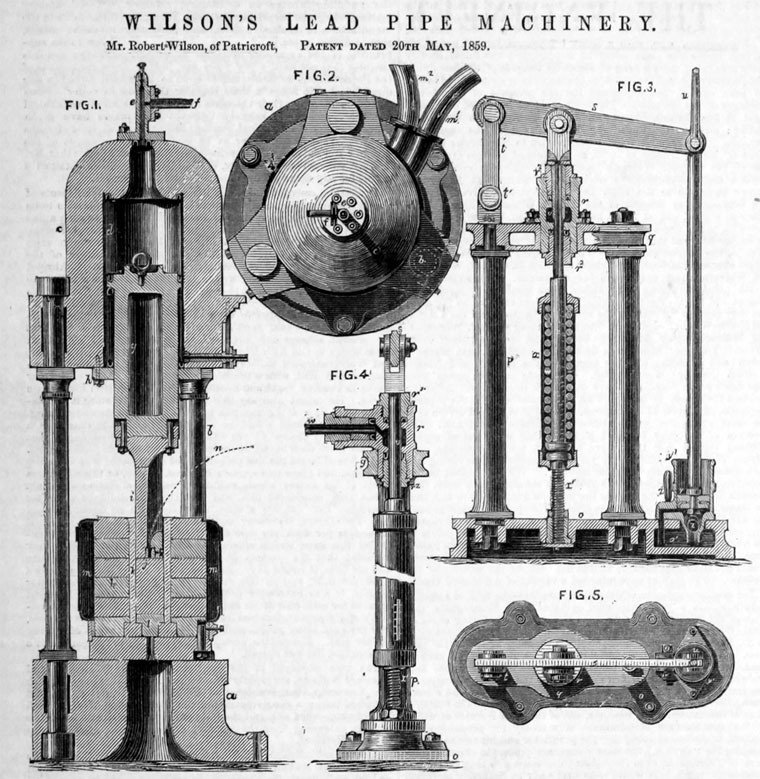 1803 Born the son of Benjamin Wilson

His eldest son, also Robert, worked for Nasmyth, Wilson and joined the Institution of Mechanical Engineers in 1883

ROBERT WILSON, who died at Matlock on 28th July 1882, was born in 1803 at Dunbar, on the east coast of Scotland, where his father was drowned in the third attempt of the lifeboat to save the remainder of the crew of the frigate "Pallas," which was cast ashore in December 1810.

As a boy be was particularly fond of aquatic amusements of every kind, and as early as 1808 the thought occurred to him that if something in the nature of a sculling oar could be fitted to the stern of vessels it would be free from the objections to side paddles. Later he tried some unsuccessful experiments with a small model; but the matter dropped until 1821, when the difficulty with which one of the new steamers overcame the ground swell in the harbour of Dunbar led to further experiments with what he now termed "rough-sea or storm paddles."

In 1827 he made the acquaintance of Mr. James Hunter, who introduced him to the Earl of Lauderdale. That nobleman promised to try to induce the Admiralty to take up the invention. It was shown at the Dunbar Mechanics' Institution, and in 1828 the Highland Society appointed a committee, who testified to the success of his plan when tried at Leith in a very heavy sea. The Society granted him £10, but only on condition of receiving his model, which he very reluctantly gave up.

In 1832 Mr. Hunter brought the matter before the Scottish Society of Arts, and a committee reported on it. A silver medal was awarded to the inventor, and the Society, through Sir John Sinclair, called the attention of the Admiralty to the subject. The Woolwich officers to whom it was referred made a brief and unfavourable report, and the inventor's hopes were dashed to the ground. These early experiments however were not lost; in prosecuting them Mr. Wilson was developing his inventive faculties, and as recently as 1880 the War Department made a grant of £500 for the use of his double-action screw-propeller as applied to the fish torpedo.

In 1832 Mr. Wilson was in business as an engineer in Edinburgh, in the North Back of Canongate; but a few years later he migrated to Manchester, and in 1838 was the manager of the famous Bridgewater Foundry at Patricroft, the birthplace of the steam hammer. The first hammer was delivered in August 1843 to the Low Moor Iron Works, and continued in use there until 1853, when Mr. Wilson, who was then engineer of that establishment, added to it what is known as the "circular balanced valve."

In 1856, on Mr. James Nasmyth's retiring from his active industrial career, Mr. Wilson was recalled from Low Moor, and became managing partner in the firm of Messrs. Nasmyth, Wilson and Co. He maintained and increased the world-wide fame of his firm, and mindful of his own early difficulties was always ready to smooth the path of those who showed talent and industry.

He did not take any active part in local affairs, but for some years was President of the Patricroft Mechanics' Institution.

In 1873 he was elected a Fellow of the Royal Society of Edinburgh. He became a Member of the Institution in 1857, and in the same year contributed, through Mr. Charles Beyer, a paper on a balanced slide-valve for steam engines (Proceedings 1857, p. 191).

In 1877 he also contributed a paper on hydraulic presses for packing cotton &c.— a class of machines largely made at the Patricroft works (Proc. 1877, p. 319).