Olympus 593 Concorde engine. Exhibit at the National Museum of Flight. 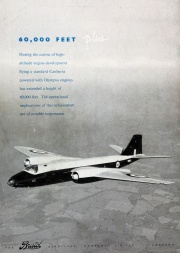 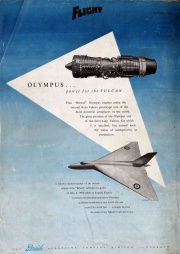 Note: This is a sub-section of Rolls-Royce.

The Olympus is a high-powered axial-flow turbojet aircraft engine, originally developed by Bristol Engine Co and produced by Bristol Aero-Engines, later passed to Bristol Siddeley Engines, and finally to Rolls-Royce.

The engine is still in production for industrial and naval power. Curtiss-Wright in the USA built a licensed version as the J67.

By modifications to the LP compressor (which included adding an extra LP stage) and the LP turbine, the thrust was increased from the 17,000 lbf (76 kN) of the Olympus 201 to 20,000 lbf (89 kN). The new engine was known as the Olympus 301. Due to the increased air mass, the Vulcan's air intakes had to be widened and, because of the extra compressor stage, the engines were larger and would not fit into the engine bays without extensive modifications

A marine version of the Olympus was trialled in the refitted Royal Navy frigate HMS Exmouth which became the first major warship in a western navy to be powered by gas turbine engines and conversion taking from 1966-1968. The Olympus was subsequently used for the Type 21 frigates and the sole Type 82 destroyer, HMS Bristol (TM1A).

The Olympus 593 project was started in 1964, using the BAC TSR2's Olympus 320 as a basis for development. Bristol Siddeley Engines of the UK and Snecma Moteurs of France were to share the project. Acquiring Bristol Siddeley Engines in 1966, Rolls-Royce continued as the British partner. The early stages validated the basic design concept but many studies were required to achieve desired specifications.

The British carried out the development of the original Bristol Siddeley Olympus and engine accessories, while Snecma had responsibility for variable engine inlet system, the exhaust nozzle/thrust reverser, the afterburner and the noise attenuation system. Britain was to have a larger share in production of the Olympus 593 as France had a larger share in fuselage production.

A jet engine draws air in at the front and compresses it. The air then combines with fuel and the engine burns the resulting mixture. The combustion greatly increases the volume of the gases which are then exhausted out of the rear of the engine. The Olympus engine takes this gas jet and passes it through straightening vanes - to obtain a laminar flow. This gas jet then enters the after-burning jet pipe where a ring of fuel injectors spray fuel onto the hot exhaust gases. The resulting combustion greatly improves thrust, although it can also lead to excessively high fuel consumption. The after-burning section was longer than the engine itself (as was the case with all early turbojets) but the thrust of the Olympus 302 rose to 30,610 lbf (136 kN).

The variable geometry exhaust nozzle is two 'eyelids' which vary their position in the exhaust flow dependent on the flight regime, for example when fully closed (into the exhaust flow) they act as thrust reversers, aiding deceleration from landing to taxi speed.

The variable engine inlet system was vital to the Olympus 593 on Concorde as supersonic airflow at the engine face would create shock-waves that would lead to engine surge and failure. The intake features variable ramps which alter the intake area which slows the intake air from supersonic to subsonic speed. This is achieved by positioning the ramps such that shock-waves are created at the inlet, air passing through these shock-waves is slowed. The inlet air is further decelerated as the intake area increases closer to the engine (speed of air flow decreases as area increases.) Any excess air is expelled through doors on the underside of the nacelle and some intake air bypassed around the engine and mixed with the exhaust - to increase thrust and keep the engine cool. The TSR-2 had used a semicircular design with the shock front adjusted by a translating centrebody.

In June 1966 a complete Olympus 593 engine and variable geometry exhaust assembly was first run at Melun-Villaroche, Île-de-France, France. At Bristol, flight tests began using a RAF Vulcan bomber with the engine attached to its underside. Due to the Vulcan's aerodynamic limitations the tests were limited to a speed of Mach 0.98 (1,200 km/h). During these tests the 593 achieved 35,190 lbf (157 kN) thrust, which exceeded the requirements of the engine.

In April 1967 the Olympus 593 ran for the first time in a high altitude chamber, at Saclay Île-de-France, France. In January 1968 the Vulcan flying test bed logged 100 flight hours, and the variable geometry exhaust assembly for the Olympus 593 engine was cleared at Melun-Villaroche for flight in the Concorde prototypes.

At 15:40 on the 2nd March 1969 Concorde prototype 001, captained by chief test pilot Andre Turcat, started its first take off run, with afterburners lit. The four Olympus 593 engines accelerated the aircraft, and after 4,700 feet of runway and at a speed of 205 knots (380 km/h), Captain Turcat lifted the aircraft off for the first time.