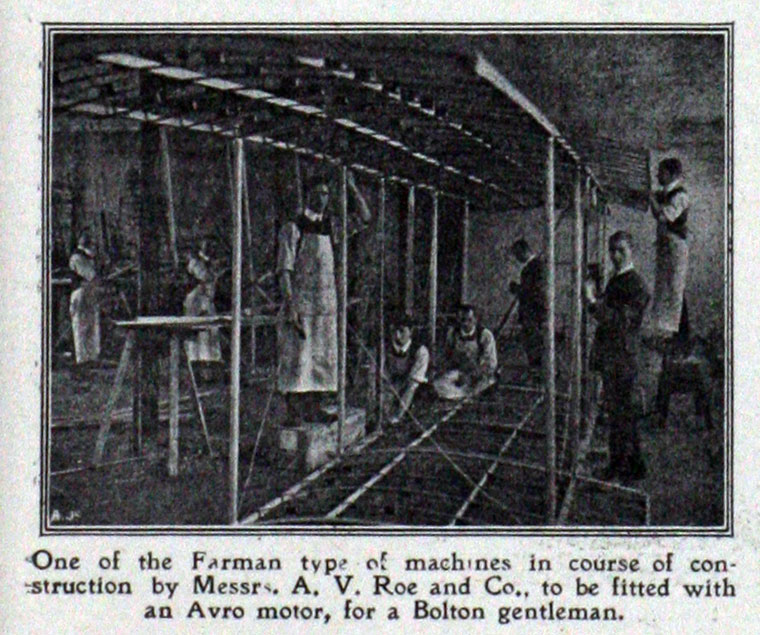 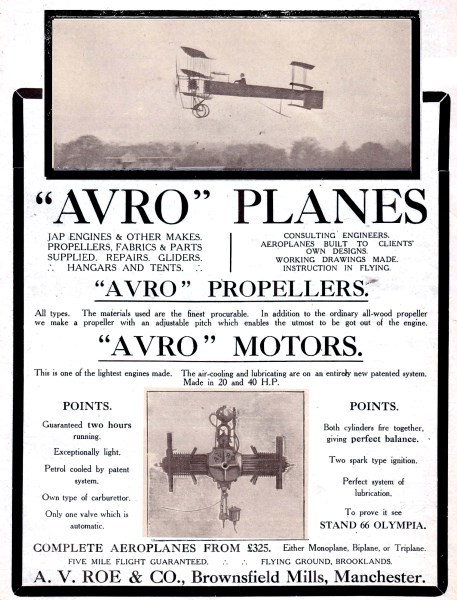 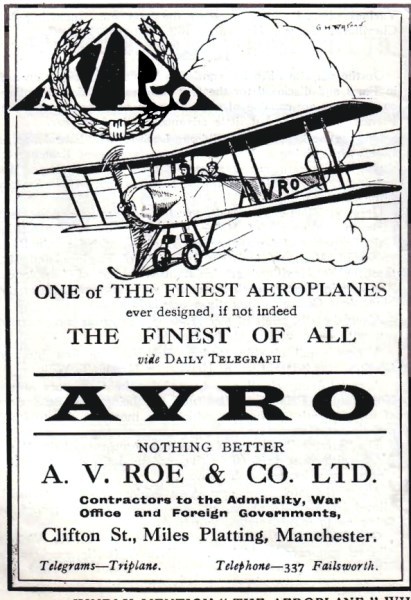 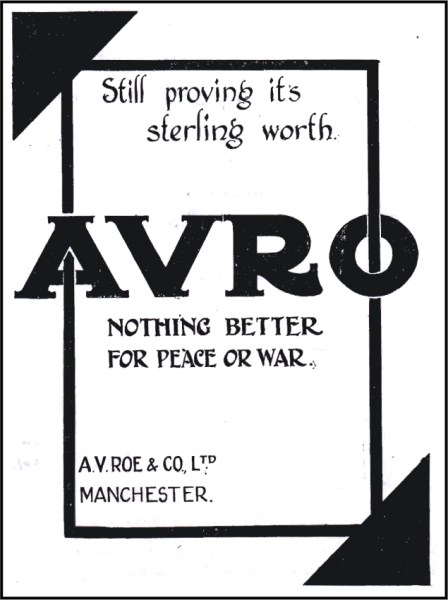 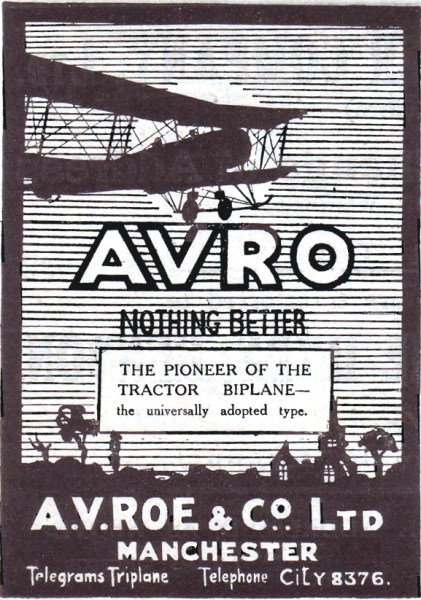 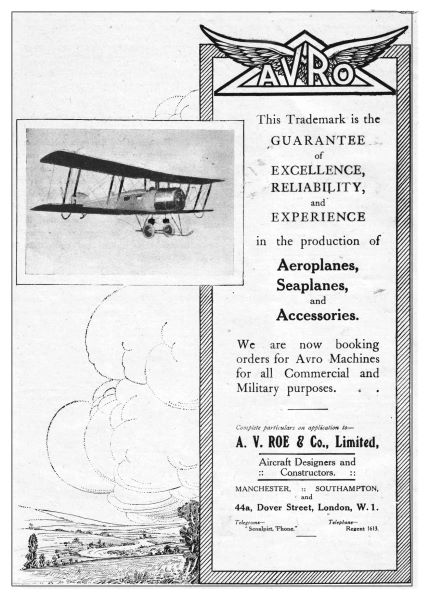 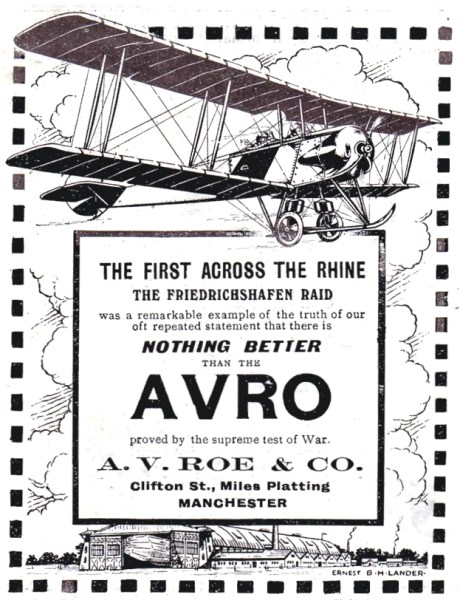 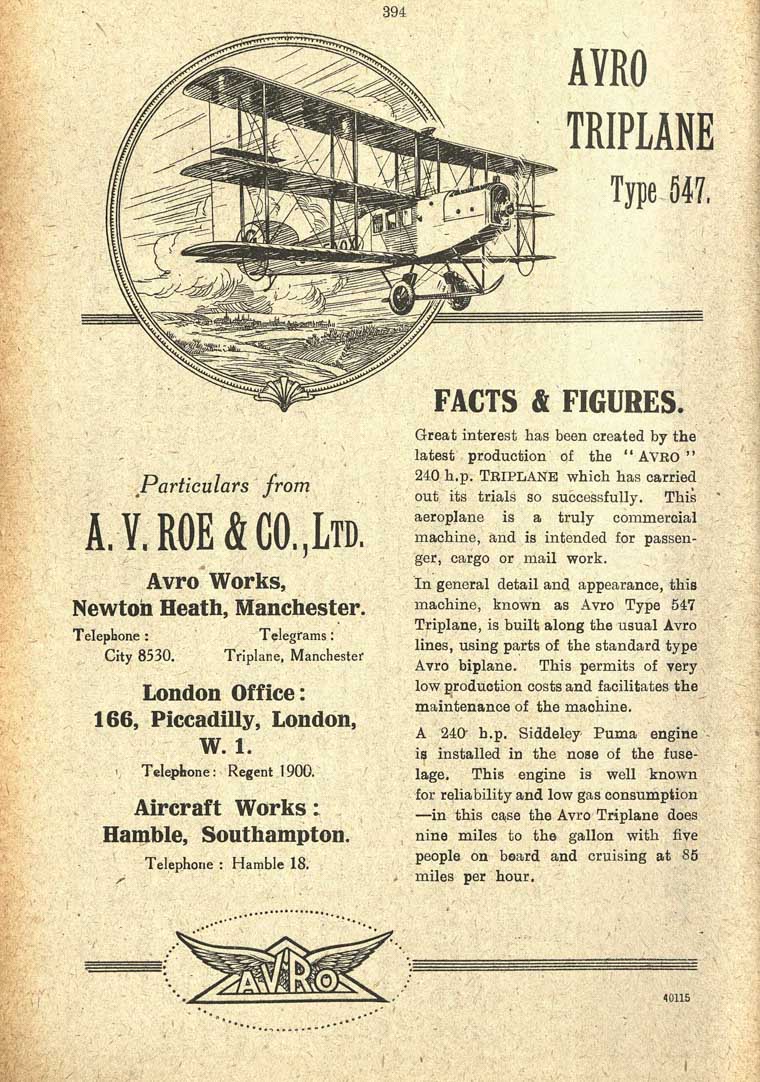 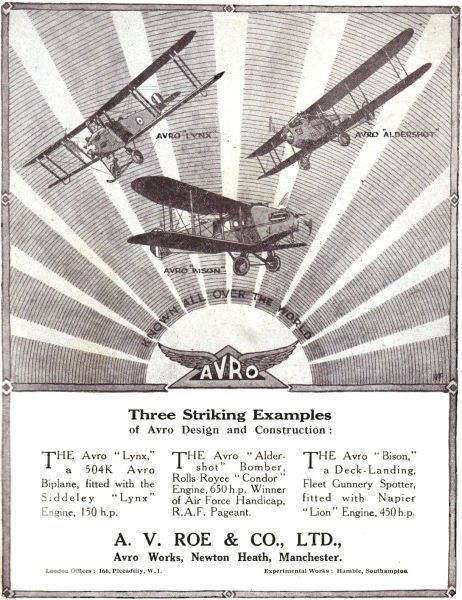 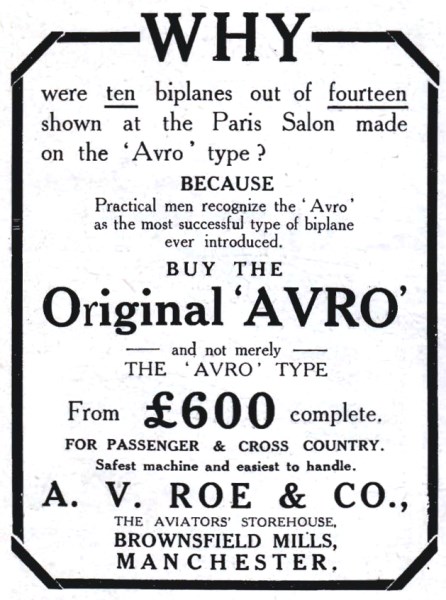 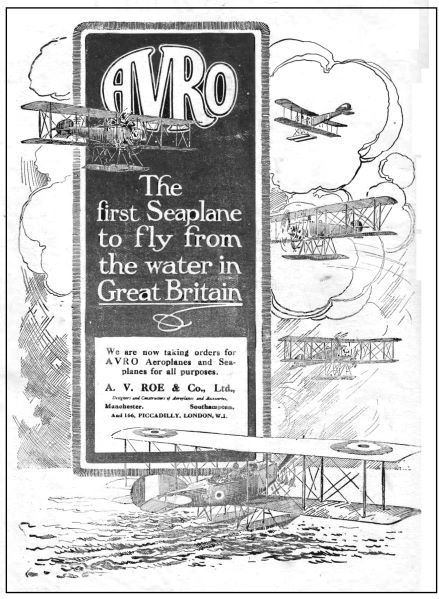 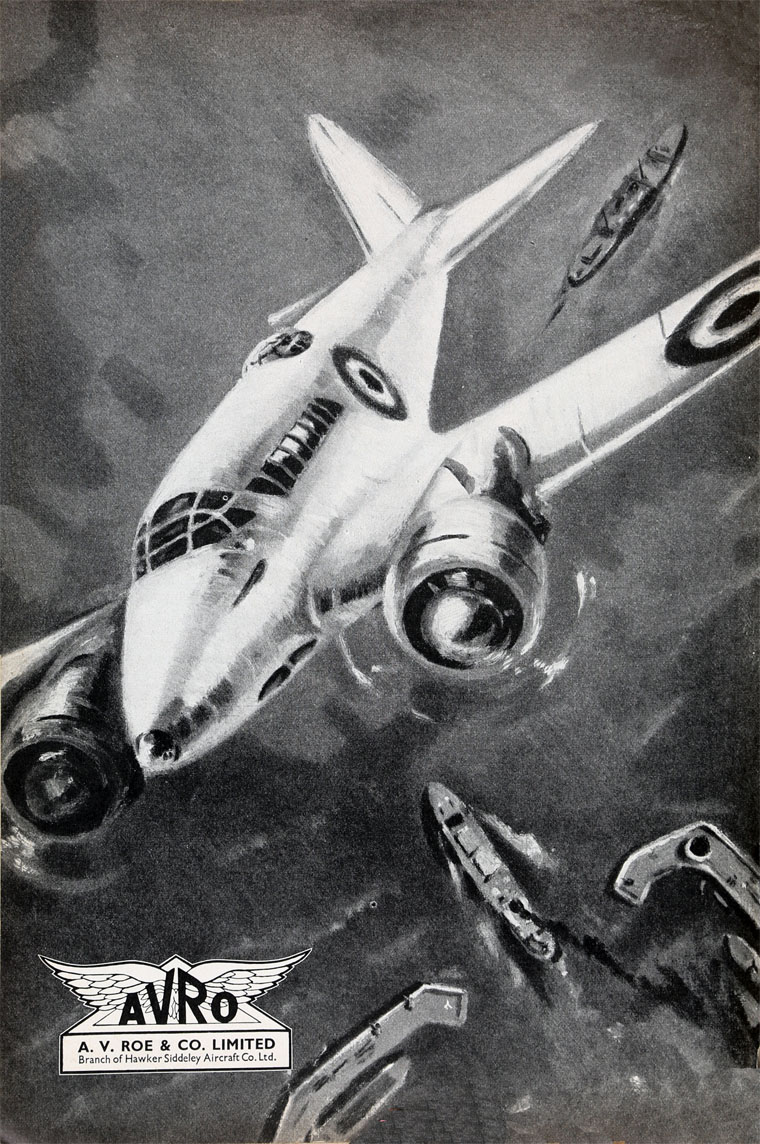 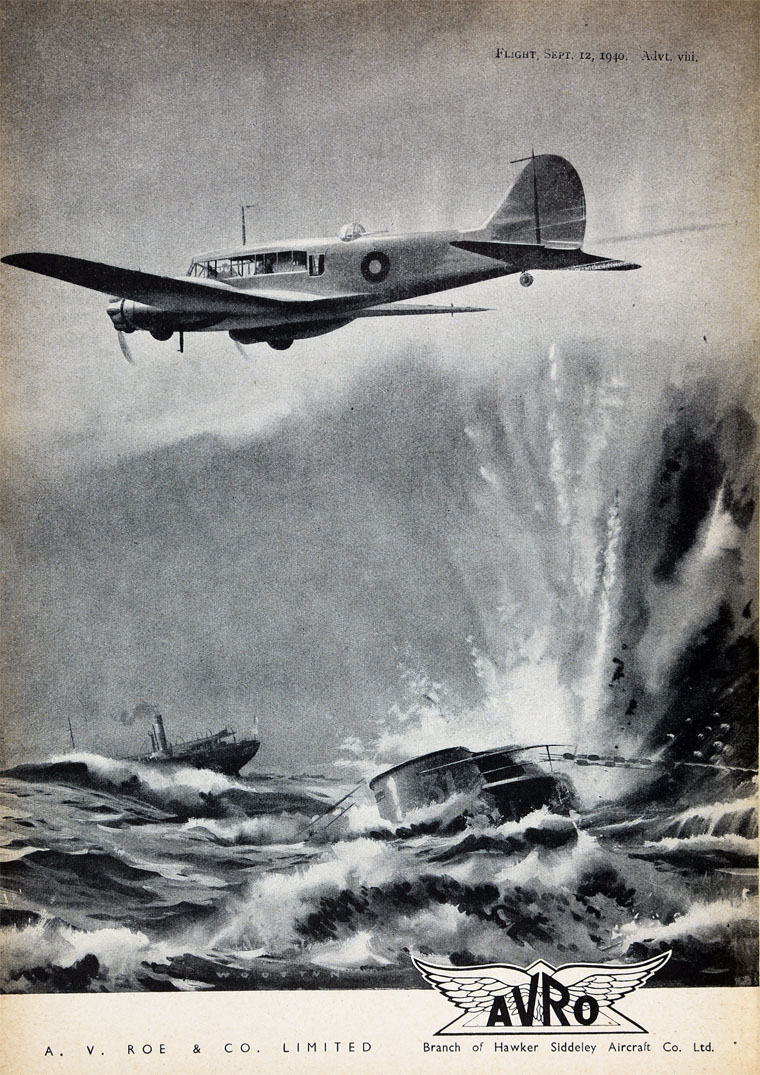 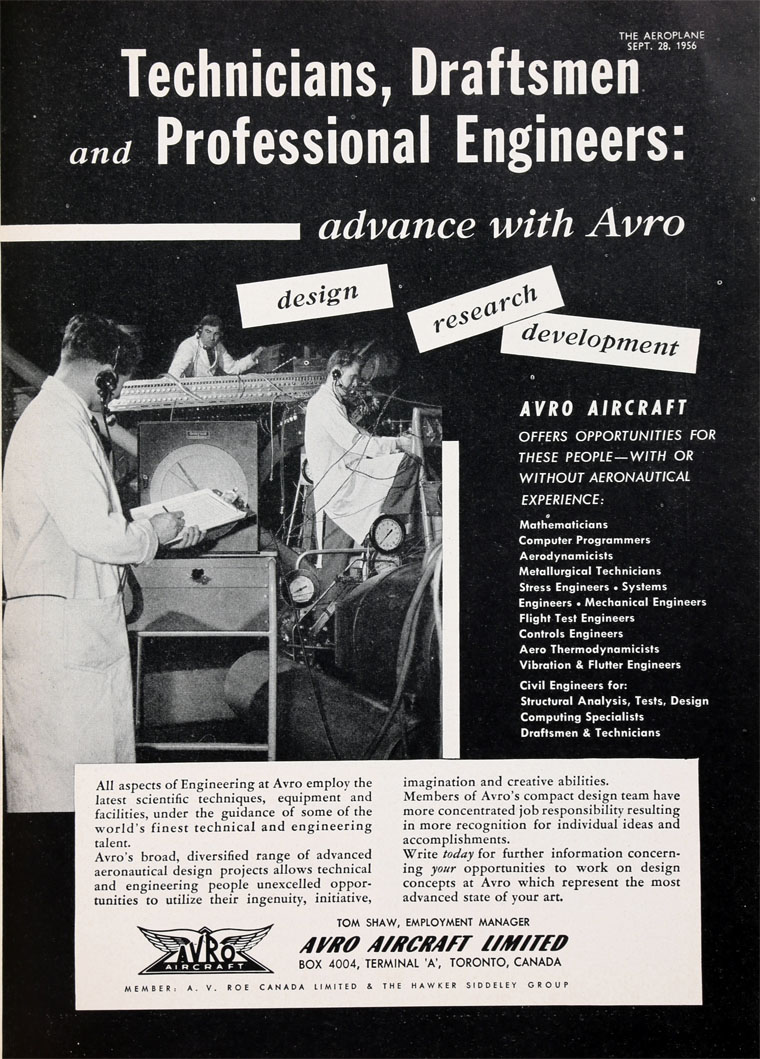 A. V. Roe and Co of Avro Works, Newton Heath, Manchester, and later Woodford, Cheshire, was a British aircraft manufacturer.

1910 One of the world's first aircraft builders, A. V. Roe and Co was established at Brownsfield Mill, Ancoats, Manchester, by Alliott Verdon-Roe and his brother H. V. Roe on 1 January. Alliott had already made a name for himself as a pilot at Brooklands near Weybridge in Surrey and Farnborough in Hampshire.

1912 The company built the world's first totally enclosed monoplane, but it was the well-proportioned, wooden biplane known as the Avro 504 that kept the firm busy throughout the First World War and beyond. Production totalled 8,340 at several factories: Hamble, Failsworth, Miles Platting and Newton Heath and continued for almost 20 years. This was a substantial achievement considering the novelty of powered aircraft in this period.

1919 October new factory at Newton Heath almost completed. Designed for building aircraft it will be actually used for automobiles. The main aircraft work will be at the Southampton works.

1920s The company left Alexandra Park aerodrome in south Manchester where test flying had taken place during its early years. A rural site to the south of the growing city was found at New Hall Farm, Woodford in Cheshire, which continues to serve aviation builders BAE Systems to this day.

1920 Crossley Motors bought A. V. Roe and Co (Avro) to make use of their nearby Manchester factory for body building[2].

Post-WWI: Awarded £40,000 by the Royal Commission on Awards to Inventors for the "Avro" aeroplane[3] and £1000 in respect of the communication to the US government.

1926 June 19th. The first Cierva autogiro windmill flying machine built in Britain, to the order of the Air Ministry, was successfully tested in flight by Captain F. T. Courtney at the aerodrome of the builders, Avro, Hamble, near Southampton. Other countries, notably France, the United States and Japan are interested in the invention, and experimental machines for their use were built in Britain by the Cierva Autogiro Co.[4]

1928 Crossley Motors had to sell Avro to Armstrong Siddeley Development Co to pay for the losses incurred in Willys Overland Crossley[5].

1928 Alliott Verdon-Roe sold his shares in the company and formed the Saunders-Roe company.

1930s Maintaining their skills in designing trainer aircraft, the company built a more robust biplane called the Avro Tutor in the 1930s that the RAF also bought in quantity. A twin piston-engined airliner called the Anson followed but as tensions rose again in Europe the firm's emphasis returned to combat aircraft.

WWII The Avro Manchester, Lancaster, and Lincoln were particularly famous Avro designs. Over 7,000 Lancasters were built and their bombing capabilities led to their use in the famous Dam Busters raid, many of them built at the Avro factory next to Leeds Bradford Airport (formerly Yeadon Aerodrome), north-west Leeds. The old taxiway from the factory to the runway can still be seen.

Post WWII. The civilian Lancastrian and maritime reconnaissance Shackleton were derived from the successful Lancaster design. The Tudor was a pressurised but problematic post-war Avro airliner that faced strong competition from designs by Bristol, Canadair, Douglas, Handley Page and Lockheed. With the same wings and engines as the Lincoln, it achieved only a short (34 completed) production run following a first flight in June 1945 and the cancellation of an order from BOAC. The older Avro York was somewhat more successful in both the RAF and in commercial service, being distinguished by a fuselage square in cross-section. Both Tudors and Yorks played an important humanitarian part in the Berlin Airlift.

Post WWII. The postwar Vulcan bombers, originally designed as a nuclear strike aircraft, was used to maintain the British nuclear deterrent armed with the Avro Blue Steel stand-off nuclear bomb. The Vulcan saw service as a conventional bomber during the British campaign to recapture the Falkland Islands in 1982. Although none has flown since 1992, several are prized as museum exhibits.

1950s A twin turboprop airliner, the Avro 748, was developed during the 1950s and sold widely across the globe, powered by two Rolls-Royce Dart engines. The Royal Flight bought a few and a variant with a rear-loading ramp and a "kneeling" main undercarriage was sold to the RAF and several members of the Commonwealth as the Andover.

1956 the Weapons Research Division of A. V. Roe & Co Ltd was entrusted with the entire development of a major weapon system under the code name of Blue Steel[8].

1963 When the company was absorbed into Hawker Siddeley Aviation in July, the Avro name ceased to be used. But the brand had a strong heritage appeal, and the marketing name "Avro RJ" (regional jet) was used by British Aerospace (BAe) to the BAe 146 from 1994 to 2001. This plane is sometimes also called "Avro 146".

The BAe ATP (Advanced Turbo Prop) design evolved from the Avro 748 and examples continue in use on shorter, mainly domestic, scheduled air services. A few Avro 504s, Tutors, Ansons and Lancasters are lovingly maintained in flying condition as reminders of the heritage of this influential English company. At 39 years, the noisy but impressive Shackleton held the distinction of being the aircraft with the longest period of active RAF service, until overtaken by the English Electric Co: Canberra in 1998.