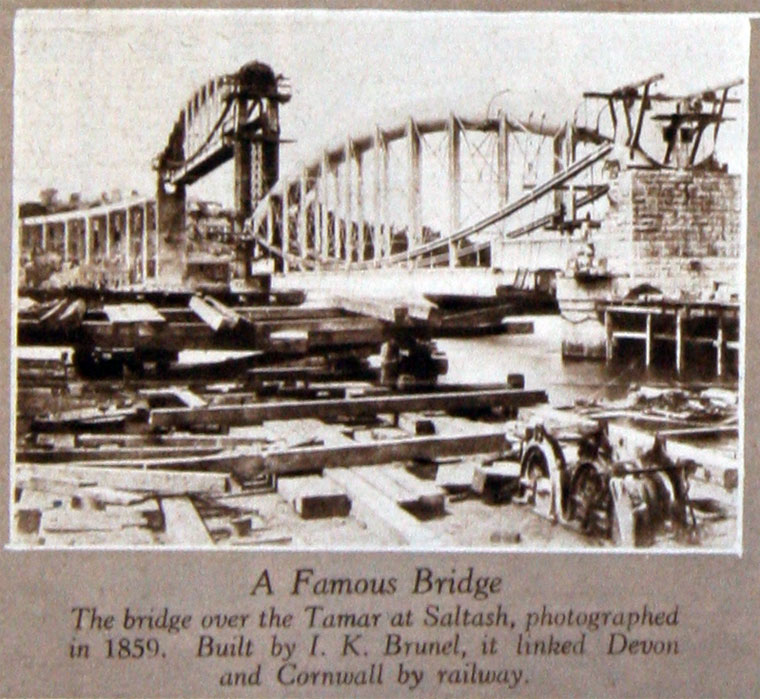 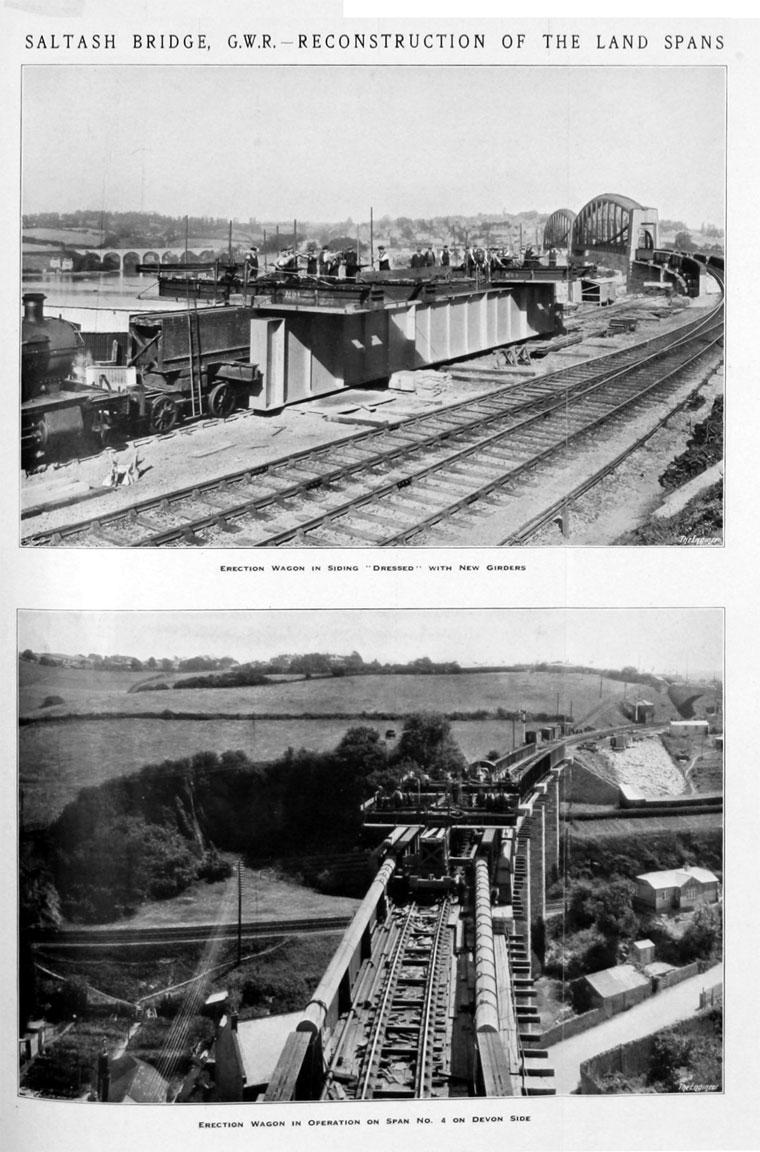 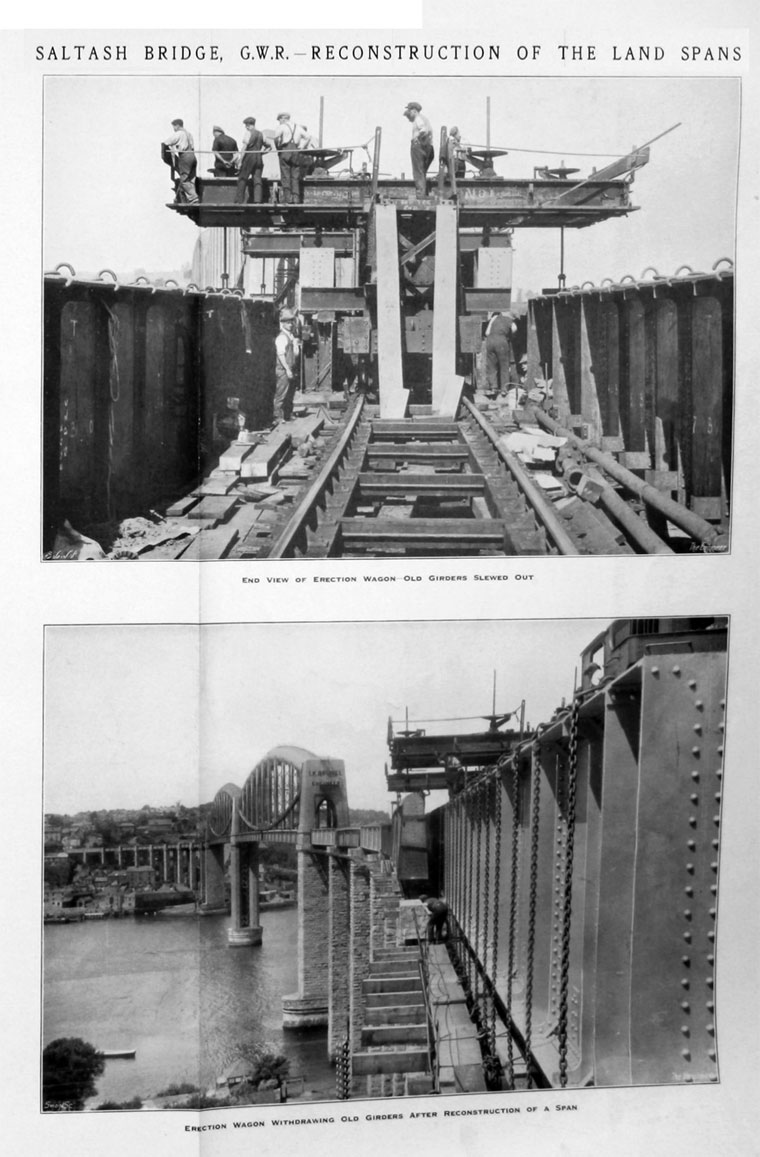 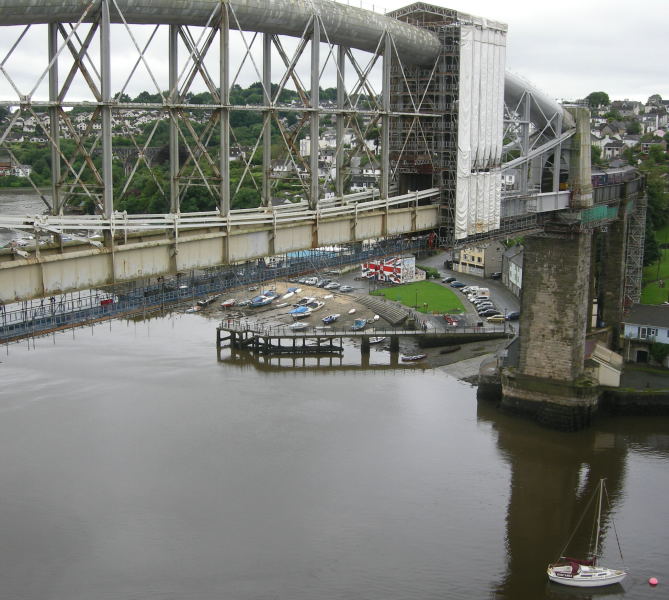 Cornish end of bridge at start of refurbishment, 2012 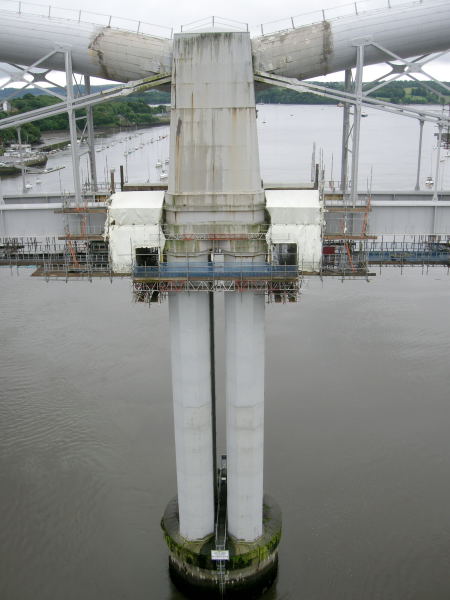 2012. The centre pier is entirely assembled from iron castings 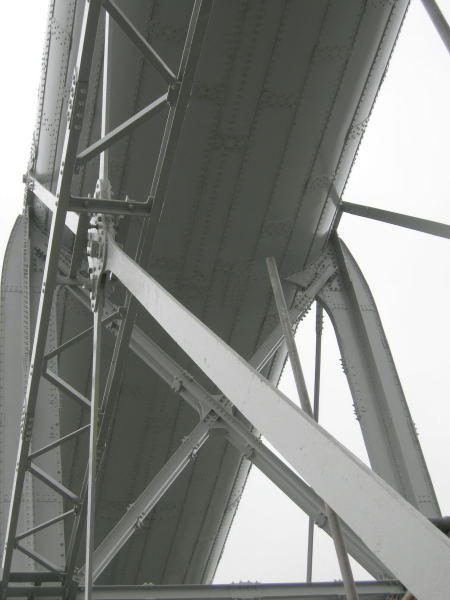 2013. Access for this and the subsequent photos was kindly provided by Network Rail 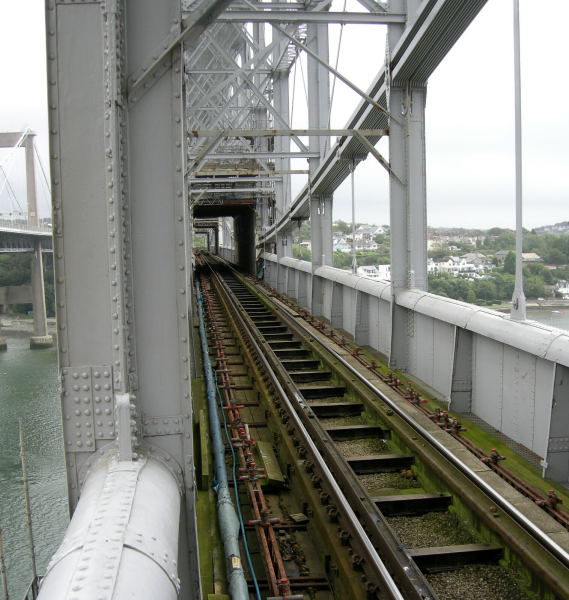 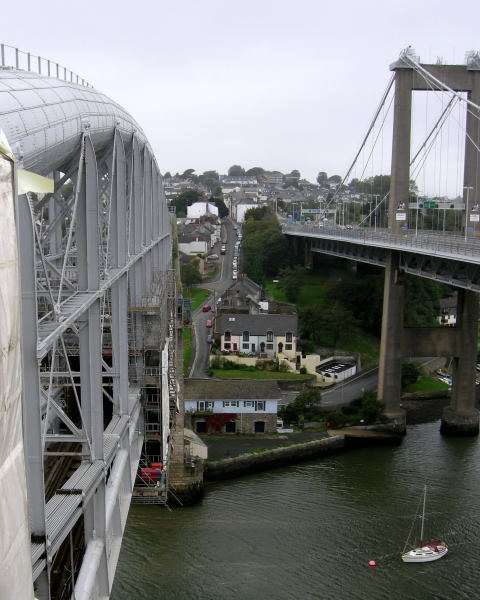 2013. Interior of one of the centre pier columns.Each octagonal box section is an assembly of four castings. Note that the position of the four vertical joints is staggered from one box to the next

The Royal Albert Bridge (also known as The Tamar Bridge) spans the River Tamar between Plymouth, on the Devon bank, and Saltash on the Cornish bank.

Its unique design consists of two 455 feet lenticular iron trusses 100 feet above the water, with conventional plate-girder approach spans. This gives it a total length of 2,187.5 feet. It carries the Cornish Main Line railway in and out of Cornwall.

It was designed by Isambard Kingdom Brunel.

Surveying started in 1848 and construction commenced in 1854.

The first main span was positioned in 1857 and the completed bridge was opened by Prince Albert on 2 May 1859. Brunel died later that year and his name was then placed above the portals at either end of the bridge as a memorial. Work was carried out during the twentieth century to replace the approach spans and strengthen the main spans.

Two rival schemes for a railway to Falmouth, Cornwall were proposed in the 1830s. The 'central' scheme was a route from Exeter around the north of Dartmoor, an easy route to construct but with little intermediate traffic. The other, the 'coastal' scheme, was a line with many engineering difficulties but which could serve the important naval town of Plymouth and the industrial area around St Austell.

The Cornwall Railway applied for an Act of Parliament in 1845 but it was rejected, in part because of the plan of William Scarth Moorsom to carry trains across the water of the Hamoaze on the Torpoint Ferry.

Following this Isambard Kingdom Brunel took over as engineer and proposed to cross the water higher upsteam at Saltash. The Act enabling this scheme was passed on 3 August 1846.

The structure was the third in a series of three large wrought iron bridges built in the middle of the nineteenth century and was influenced by the preceding two, both of which had been designed by Robert Stephenson. The two central sections of Brunel's bridge are novel adaptations of the design Stephenson employed for the High Level Bridge across the River Tyne in Newcastle Upon Tyne in 1849.

Brunel was present when Stephenson raised the girders of his Britannia Bridge across the Menai Strait in the same year.

From 1849 to 1853 was Brunel erecting an iron bridge of his own. The Chepstow Railway Bridge carried the South Wales Railway across the River Wye and featured a main truss of 300 feet with a curving tubular main member, and three conventional plate-girder approach spans of 100 feet, a similar solution to that adopted for crossing the River Tamar at Saltash.

The river is around 1,100 feet wide at Saltash. Brunel's first thoughts had been to cross this on a timber viaduct with a central span of 255 feet and six approach spans of 105 feet with 80 feet clearance above the water. This was rejected by the Admiralty, who had statutory responsibility for navigable waters, and Brunel thus produced a design to give 100 feet clearance, with two spans of 300 feet and two of 200 feet.

The final design as built consists of two main iron spans of 455 feet with 100 feet clearance above mean high spring tide. These two spans are lenticular trusses with the top chord of each truss comprising a heavy tubular arch in compression, while the bottom chord comprises a pair of chains. Each of the trusses is simply supported and therefore no horizontal thrust is exerted on the piers, which is crucial in view of the curved track on either side. Between these two chords are supporting cross-bracing members and suspension standards which hang beneath the bottom chord to carry the railway deck which is a continuous plate beam.

There are also seventeen much shorter and more conventional plate-girder approach spans on the shore. On the Cornish side there are ten which measure a total length for the nineteen spans of 2,187.5 feet.

The first work was to properly survey the river bed. On 26 April 1848 a 6 feet iron cylinder 85 feet tall was launched into the Tamar. From the bottom of this the bed of the river could be examined to identify its nature and the location of solid foundations.

The Cornwall Railway at this time was finding it difficult to raise funds and so most operations were suspended that summer, but a small fund was allowed for Brunel to continue the survey. The cylinder was positioned at 35 different places and a total of 175 borings made.

In 1853 the tenders for the bridge were considered by the Cornwall Railway Board, and it was decided to let the work to Charles Mare, a shipbuilder from Blackwall who had built the ironwork for the Britannia Bridge. The fee he sought for building the Saltash Bridge was £162,000, but on 21 September 1855 he filed for bankruptcy.

Brunel proposed that the company should take over the works on the bridge without engaging another contractor, to which the company agreed.

Mare's first task had been to establish an erecting yard on the Devon shore with a jetty and workshops. He then proceeded to construct a 37 feet iron cylinder 90 feet tall which was to form the work base for the construction of the central pier. This was launched in May 1854 and moored in the centre of the river between four pontoons. The bottom had been shaped to follow the rock surveyed in 1848; once it was settled on the river bed the water was pumped out, the mud within it excavated, and a solid masonry pier built up clear of the water. This was completed in November 1856.

The landward piers on the Cornish side of the river were completed in 1854 and the girders for these spans were hoisted up to their correct positions. Next to be built was the main truss for the Cornwall side of the river. The lower ties of the trusses formed of chains made from 20 feet links. Many were obtained from the suspended works for Brunel's Clifton Suspension Bridge and others rolled new for Saltash.

The Cornwall span was floated into position on 1 September 1857 and jacked up to full height in 3 feet stages as the piers were built up beneath it, the central pier using cast iron octagonal columns; the landward one using ordinary masonry.

The second span soon after it was floated onto the piers and had been jacked up the first 12 feet towards its final position. With the yard now cleared of the first truss, work could start on the main Devon span.

This was similarly floated into position on 10 July 1858 and then raised in a similar manner; it was in its final position by 28 December 1858. After this had been removed, part of the yard had to be cleared to allow the construction of the final landward pier and then the Devon approach spans could be raised up to their final position.

The work was sufficiently advanced that directors were able to make an inspection by train on 11 April 1859.

The Cornwall span had been tested before it was launched. The two ends were supported on substantial timber piers and the remaining scaffolding removed. Static loads of 1.25 and then 2.25 tons per foot were placed on the deck, the deflections measured and any permanent change measured once the road was removed. Now that it was completed, the bridge had its statutory inspection and tests by Colonel Yolland on behalf of the Board of Trade on 20 April 1859. He ran a heavy train over the bridge and measured deflections in the main trusses of 1.14 inches (29 mm) in the Devon truss, and 1.20 inches (30 mm) in the Cornwall one. Overall he described it as 'highly satisfactory'.

1859 Prince Albert had agreed to the bridge being named after him as early as 1853. He was also invited to perform the opening ceremony, and on 2 May 1859 he travelled from Windsor on a special train. Several thousand spectators attended that day, but illness prevented Brunel's attendance, and guests from Cornwall were late for the ceremony as their train broke down at Liskeard. Public services commenced on 4 May 1859.

The words I. K. BRUNEL, ENGINEER, 1859 appear in large metal letters on either end of the bridge, added as a memorial after his death on 5 September 1859.

In 1921, new access platforms were added that obscured the lettering but in 2006 Network Rail relocated the platforms, allowing the name to be clearly seen again. The walkways had previously been temporarily removed in 1959 and the bridge floodlit during its centenary year.

1905 Some 401 new cross-girders were fitted in 1905 to allow heavier locomotives to pass over.

In 1908 the two spans nearest Saltash railway station were replaced with wider ones to accommodate a new track layout.

During the 1930s new cross-bracing and diagonal sway-bracing were added between the vertical standards to further strengthen the bridge and keep the suspension chains hanging in the correct shape.

'CORNWALL RAILWAY, SALTASH.
To Engineers, Contractors, and Others.
Messrs. FULLER aud HORSEY
Are instructed TO SELL BY AUCTION,
On Tuesday, September 6, and following days, at eleven each day, at the Works, Saltash Bridge, Cornwall, about three miles from Plymouth, and on the banks of the River Tamar,—
THE MACHINERY and TOOLS recently used in the construction of the Royal Albert Bridge, Saltash, including two self-acting planing machines by Glasgow, one to take in 12 feet long by 8 feet wide, the other to take in 12 feet 9 in. long by 3 ft. 3 in. wide; one very powerful sell-acting radial drilling machine (radius 11 feet 6 inches) ; a 10-inch self-acting screw-cutting lathe by Smith, Beacock, and Tannett, with 12 feet break ; 14-inch centre sefl-acting screwcutting lathe, by Parr, Curtis, and Madely; a very powerful self-acting double lathe, for facing two surfaces at one operation ; self-acting screw-cutting machine, with taps and dies, to screw up to 2 3/4 inch ; self-acting slotting machine, by Glasgow ; three self-acting wall-drilling machines, two drilling machines, with hand feed motion, one small self-acting planing machine, Glasgow; set of 10 ft. 6 in. plate-bending rolls, four very powerful lever punching and shearing machines, with wrought-iron levers, 11 feet each ; a 15-cwt. Nasmyth’s steam hammer, two 30-inch Lloyd’s fans, wrought iron and wood post cranes ; an hydraulic chain-testing apparatus, with bed 54 feet long, ram and pumps, three high-pressure steam engines, of 8, 12, and 15-horse power, and boilers, two portable steam engines of 10-horse power, by Clayton, Shuttleworth, and Co. ; 200 feet turned bright shafting, 30 riggers, pattern-maker’s lathe, grindstone, large steam winding machine, by Horn; 14 very powerful crabs, stocks, taps, dies, and steel tools, vices, anvils, weighing machines, small fire-engine, and other effects.
To be viewed on Saturday and Monday previous to the Sale (the machinery in motion), when catalogues, at sixpence each, may be had at the Works ; and of Messrs. Fuller and Horsey, Billiter Street, London,
Note.- There is every facility for removal of the goods by either land or water carriage, as there is a jetty with crane for loading on the river, and there is a railway station at Saltash Bridge. The works are also intersected by iron tramways. Freights are very low from Plymouth.
Approved Bills at three months’ date will be taken from purchasers to the extent of £50 and upwards.