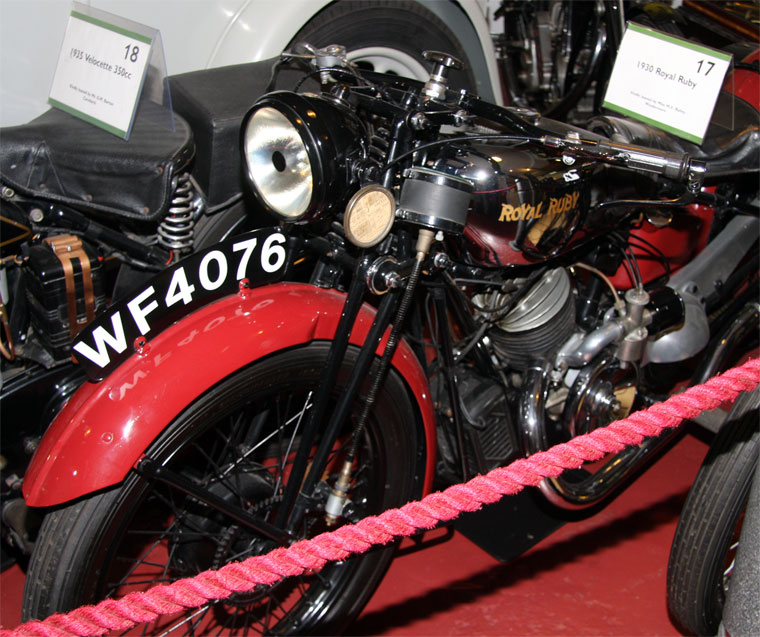 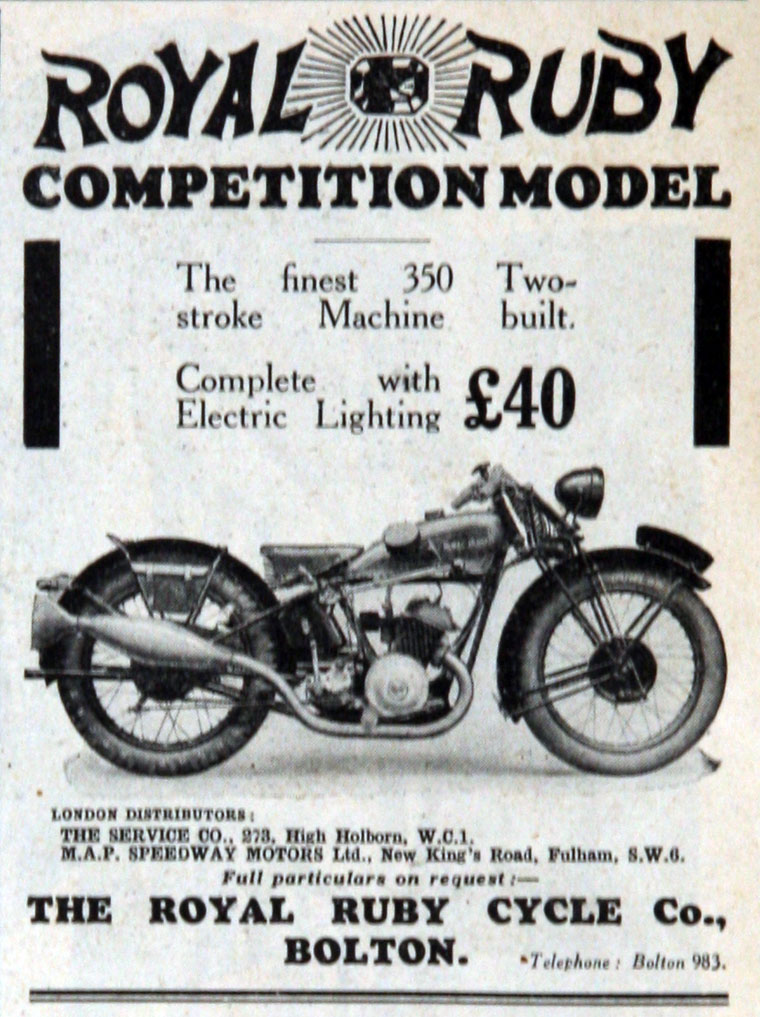 Royal Ruby were motorcycles produced from 1911 to 1933, in various locations. The firm started out in Manchester, later moved to Altrincham in Cheshire, and finally to Bradshawgate in Bolton, Lancashire.

Started as bicycle company in Ancoats at the (?) turn of the century.

1911 Their first machine was a 3.5hp Cob model. This had an LMC engine, belt drive and sprung forks.

1912 This same model now had a 3.5hp JAP engine, Druid forks and either a Roc two-speed or Sturmey-Archer three-speed gear.

1914 A sidecar model was added - this with an equally high standard of finish. A further model was a two-stroke, powered by a 269cc Villiers engine with belt drive or chain-driven two-speed Albion gearbox and fitted with Druid forks.

1916 Those models continued until that year and then stopped.

1916 Motor bicycle with sidecar. Exhibit at Manchester's Museum of Science and Industry.

Post-World War I. The firm introduced a frame with pivoted-fork rear suspension. Both rear and front suspensions used leaf springs.

1919 The company made its first move - to new premises in Altrincham, in Cheshire, where they made their own 349cc sv engines and two-speed gearboxes to fit the cycle parts. For their big V-twin sidecar outfit they kept to the JAP. This engine was a 976cc sv with three speeds and all-chain drive. It is thought that, in the early years after the war, some Royal Ruby machines were used by the Post Office to deliver mail. These were combinations fitted with postal carriers. [1]

1921 Options now included rigid frame and sports trim, and there was a larger single of 375cc with a three-speed gearbox. Charlie Dodson, who was later to become a successful competitor in the Senior TT, was now an apprentice at the Altrincham works, and the factory regularly hosted overseas visitors who were keen to learn from British expertise.

1922 The range continued and Sturmey-Archer gearboxes were tried out on some models. The post-war recession affected the firm badly and it went into liquidation.

1924 Early in the year, the name returned in Lancashire. This was following the acquisition of goodwill and assets by Horrocks' Motor House. They began with the 349cc sv model in a rigid frame, with Ruby gearbox and cantilever front fork. They then added a 292cc sv JAP version with a two-speed Albion gearbox.

1925 Those models continued, all with all-chain drive. They were joined by a sports machine with the 340cc oil-cooled ohv Bradshaw engine and three-speed Moss gearbox. It only lasted for one year.

1927 Only the JAP model continued. A move to Villiers two-stroke power brought in a new 343cc model, both with Albion three-speed gearboxes and chain drive.

1928 Villiers engined models were now of 172cc, 247cc and 343cc; JAP models had 248cc and 344cc ohv engines. The four-strokes had redesigned frames with duplicated front downtubes, one behind the other, and saddle fuel tanks.

1929 The four-strokes were discontinued and so, by the end of the decade, only two-strokes were in production.

1932 That single model was joined by Club and Standard versions of the same.

1933 They were joined by three versions of 249cc, one with water cooling. It was the final year.