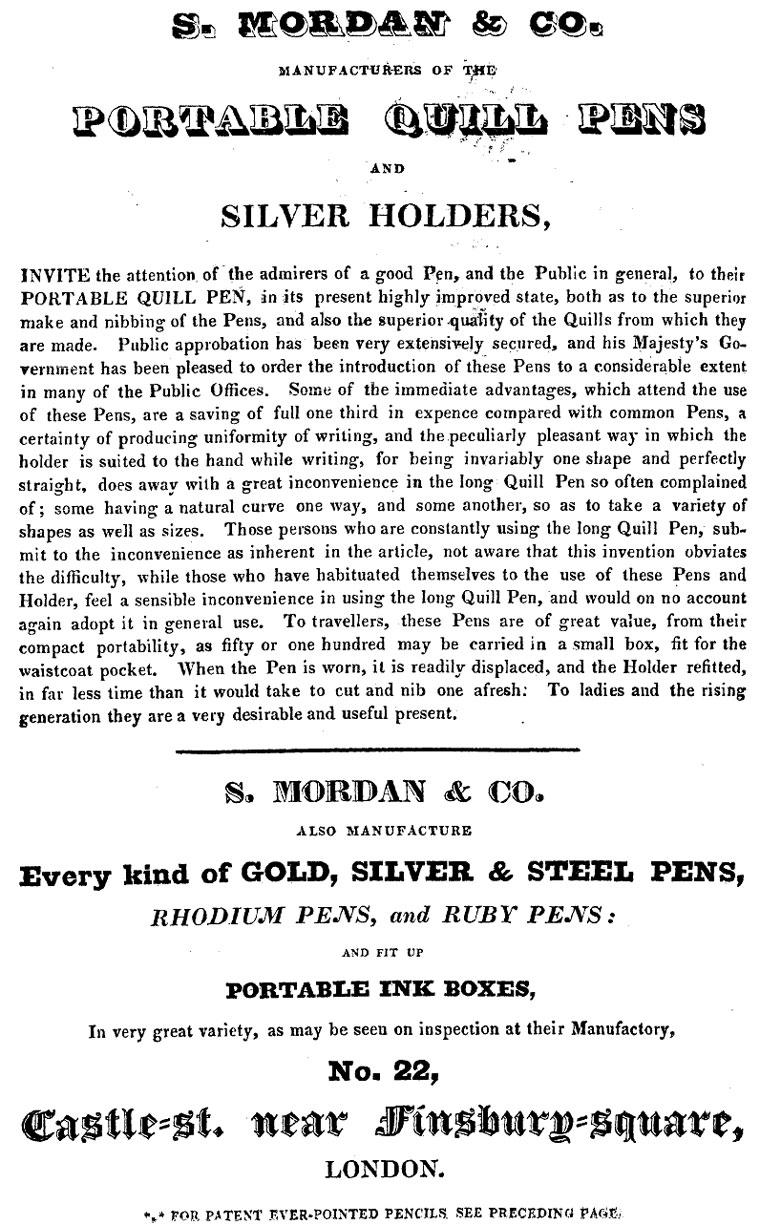 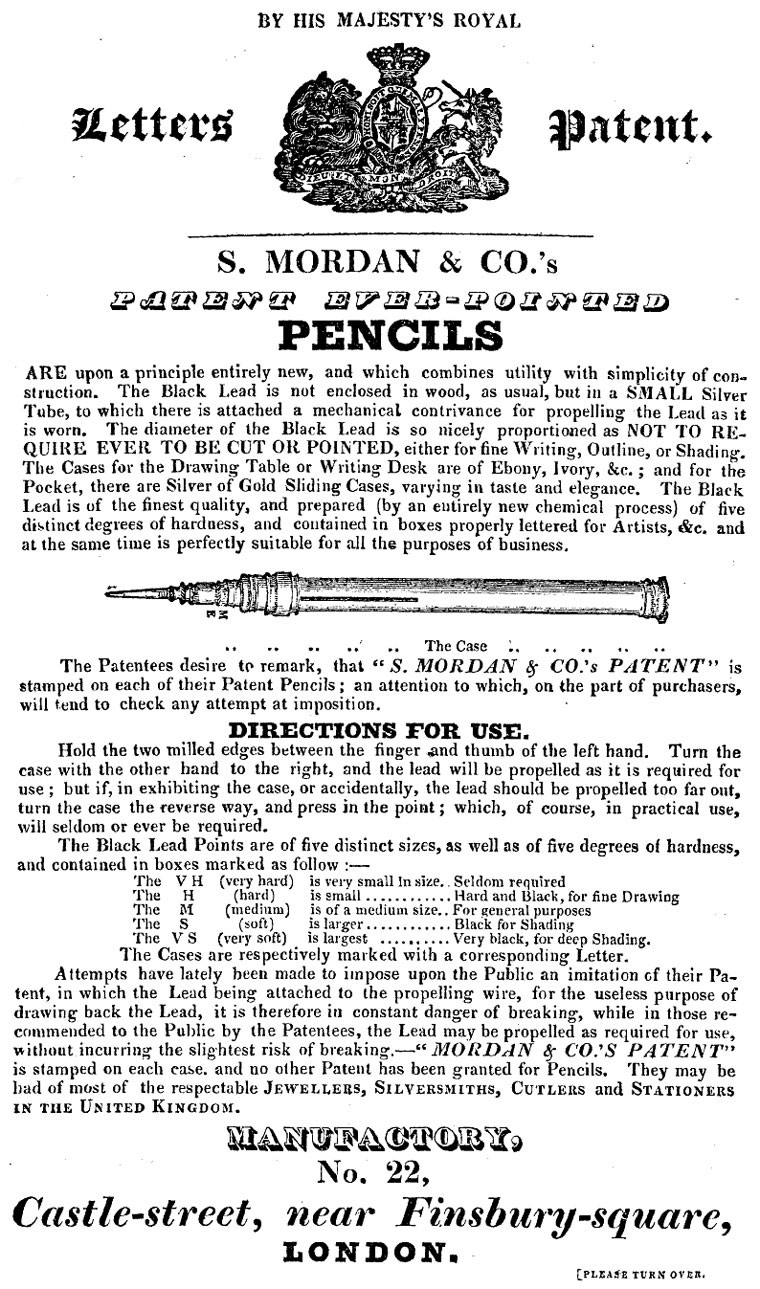 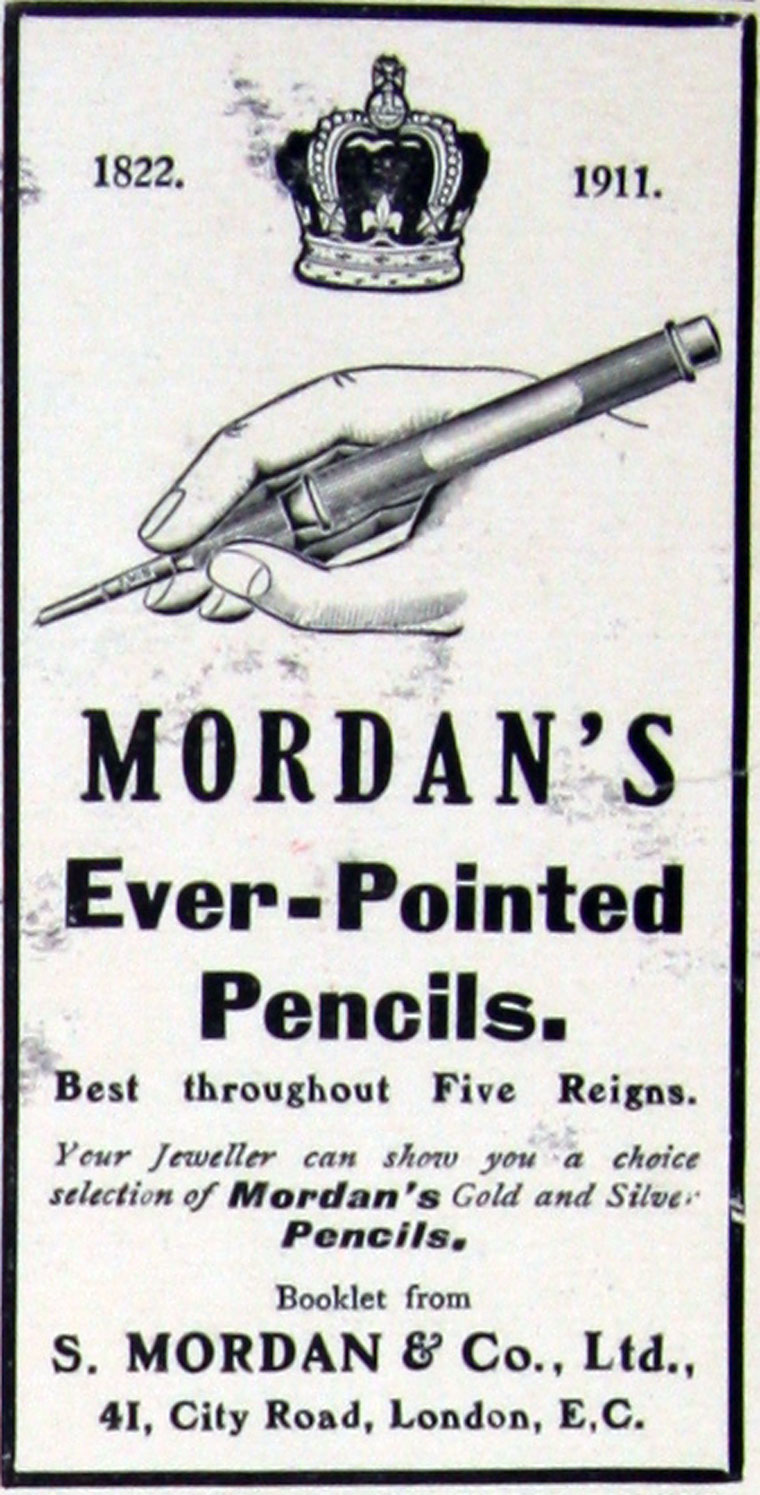 Sampson Mordan senior was an apprentice of Joseph Bramah

1822 Mordan patented his first "ever pointed or propelling pencil" on which the fortunes of his firm were based. The mechanical pencil was first invented in Britain by Sampson Mordan and Gabriel Riddle - the earliest Mordan pencils are thus hallmarked SMGR. Note: There is an opinion that the propelling pencil was invented by John Isaac Hawkins with Sampson Mordan and that Gabriel Riddle was a manufacturer.

1826 Advert. 'BY HIS MAJESTY'S ROYAL LETTERS PATENT. MORDAN & CO.'S PATENT EVER-POINTED PENCILS.- The ingenuity and utility of this invention having secured universal approbation, it needs only to be seen to be instantly appreciated. Not requiring the use of a knife for forming the point, Ladies in drawing or writing will not soil the most delicate glove, and a short-hand writer will never be impeded in taking notes. Other advantages will be obvious to the purchaser.- Sold by most respectable Goldsmiths, Jewellers, Silversmith, Stationers, etc. etc. - N.B To present imposition, "S. Mordan & Co.'s Patent" is stamped on each of their Patent Pencils.'[1]

1837 Partnership dissolved. '...Partnership heretofore subsisting between Sampson Mordan and Gabriel Riddle, under the firm of S. Mordan and Co., (by virtue of an indenture made in October 1823), and carrying on business as Mechanists and Manufacturers of Patent and other articles, at No. 22, Castle street, Finsbury, London, was, on the 20th of December last, dissolved, by the expiration of the term limited in the said indenture...'[2]

By 1838, the firm of S. Mordan and Co listed smelling bottles, ink stands, locks, letter balances and many other small well-made objects, often with an aspect of engineering about them that intrigue today's collectors. Always projecting a reputation of top quality, the business thrived.

1843 After Sampson senior's death, his sons Sampson (junior) and Augustus inherited the firm.

Also made copying and tracing machines.

1879 Partnership dissolved. '...the Partnership heretofore subsisting between us the undersigned, Sampson Mordan, Augustus Mordan, Zachariah Watkins, and Edmund Johnson, carrying on business as Machinists and Manufacturers, at 41, late 22A, City-road, Finsbury, in the county of Middlesex, and 72, Cheapside, in the city of London, under the style or firm of S. Mordan and Co., was, on the 17th day of April, 1879, dissolved, so far as regards the said Zachariah Watkins, by mutual consent...'[3]

1941 S. Mordan and Co continued manufacturing pencils and a wide range of silver objects until the Second World war when their factory was bombed.

Post-WWII. The Sampson Mordan Co patterns were sold, and the name was acquired by Edward Baker of Birmingham. Frank Tufnell junior, whose father had been an associate of Mordan's, bought the Edward Baker Co, as well as a majority shareholding in Yard-O-Led Pencil Co.