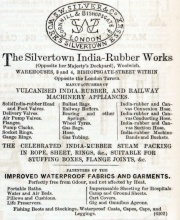 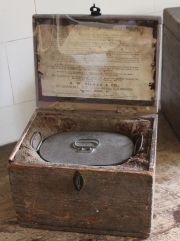 S.W. Silver & Company began in the 18th Century as Colonial and Army agents, clothiers and outfitters principally to those in the Army and Colonial Service, as well as acting as shipping agents for such people travelling overseas.

1823 Silver and Arrowsmith was dissolved; S W Silver continued to trade in tropical clothing but moved his warehouse, from where he traded, to 9 Cornhill[1]

1852 the factory moved to Woolwich Reach on the north bank of the Thames. The factory continued to expand, employing most of the local population, and the area became known as Silvertown, a name that still exists today.

1855 S. W. Silver died and was succeeded by his two sons, Stephen William Silver and Hugh Adams Silver, who continued to expand the business.

1860 Charles Hancock, formerly of the West Ham Gutta Percha Co, joined the company in 1860, bringing with him his patents and knowledge of gutta percha.

1864 Together Silver and Hancock took out a patent for waterproofing and insulating materials. With this new patent and Hancock’s experience of cable manufacture they decided to enter the field of submarine cable manufacture and to finance this venture they set up the India Rubber, Gutta Percha and Telegraph Works Co offering shares to the public, and absorbed West Ham Gutta Percha Co.

1864 March: the prospectus of Silver's Indiarubber Works and Telegraph Cable Company Ltd was issued; Silver and Co would continue to be connected with the company which would use the works in Silvertown[3]

1864 July: The name of Silver's Indiarubber Works and Telegraph Cable Company was changed to The India Rubber, Gutta Percha and Telegraph Works Company[4]

1860s S W Silver and Co published a regular series of circulars summarising developments, such as mineral finds, in Australia and other colonies.