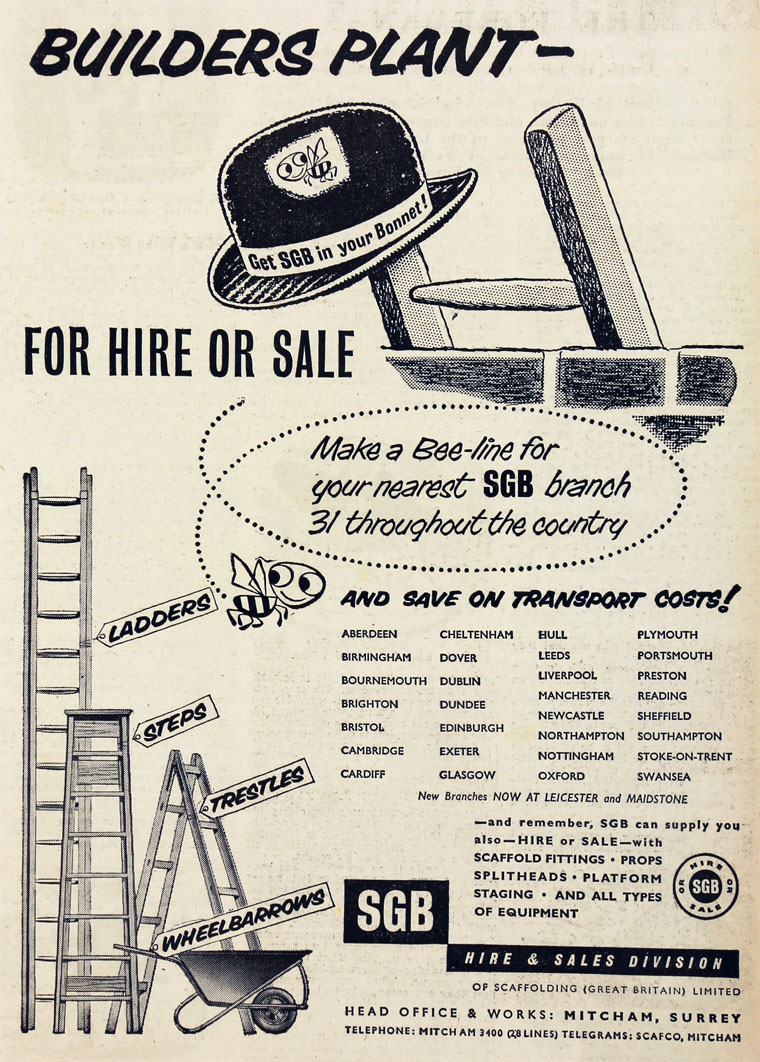 1920 The Tubular Scaffolding Co Ltd was incorporated to acquire the plant and material used in the scaffolding business of the Patent Rapid Scaffolding Tie Co Ltd, and to acquire and develop a patent for a coupler to join metal tubes together to form tubular scaffolding.

1922 Public company. The company was floated on the Stock Exchange as Scaffolding (Great Britain) Ltd.

By 1960 the company was the largest scaffolding company in the United Kingdom and, in addition to supplying the full range of scaffolding requirements, also supplied a large range of building equipment for sale or hire.

1964 Began to diversify and expand further.

1968 Hire Shops Ltd and Hire Service Co (London) Ltd were still not in profit but this was not unexpected for a new way of doing business; the 2 companies had been brought together to trade as Hire Service Shops[4]

1969 Acquired Peter Cox Ltd, a company which specialized in the restoration of historic buildings and monuments, stone cleaning and damp-proofing

1974 Acquired the Hardun Group of companies, manufacturers of timber building systems and temporary and mobile site accommodation, and vendors of an extensive range of small tools, protective clothing and site equipment.

1974 Acquired Contractors' Services Group Ltd, which provided a comprehensive range of plant for hire from depots throughout the United Kingdom; this created a major national plant hire company.

1978 All SGB's hire shops and related activities were brought together to form HSS Hire Group Ltd.

Subsequently SGB acquired companies specialising in heavy earth-moving equipment and in the supply of mechanical hoists for goods and passengers.

1985 A strategic review led to identification of core businesses:

Then acquired Stonewest Ltd, a specialist masonry and building restoration company based in Bristol, and Harrison Hire Ltd.

1985 BET plc made a take-over bid for the company which was referred to the Competition Commission.

1993 After a year of big losses, John Mowlem sold HSS Hire Service Group to Davis Service Group and would use the proceeds to reduce gearing[11]