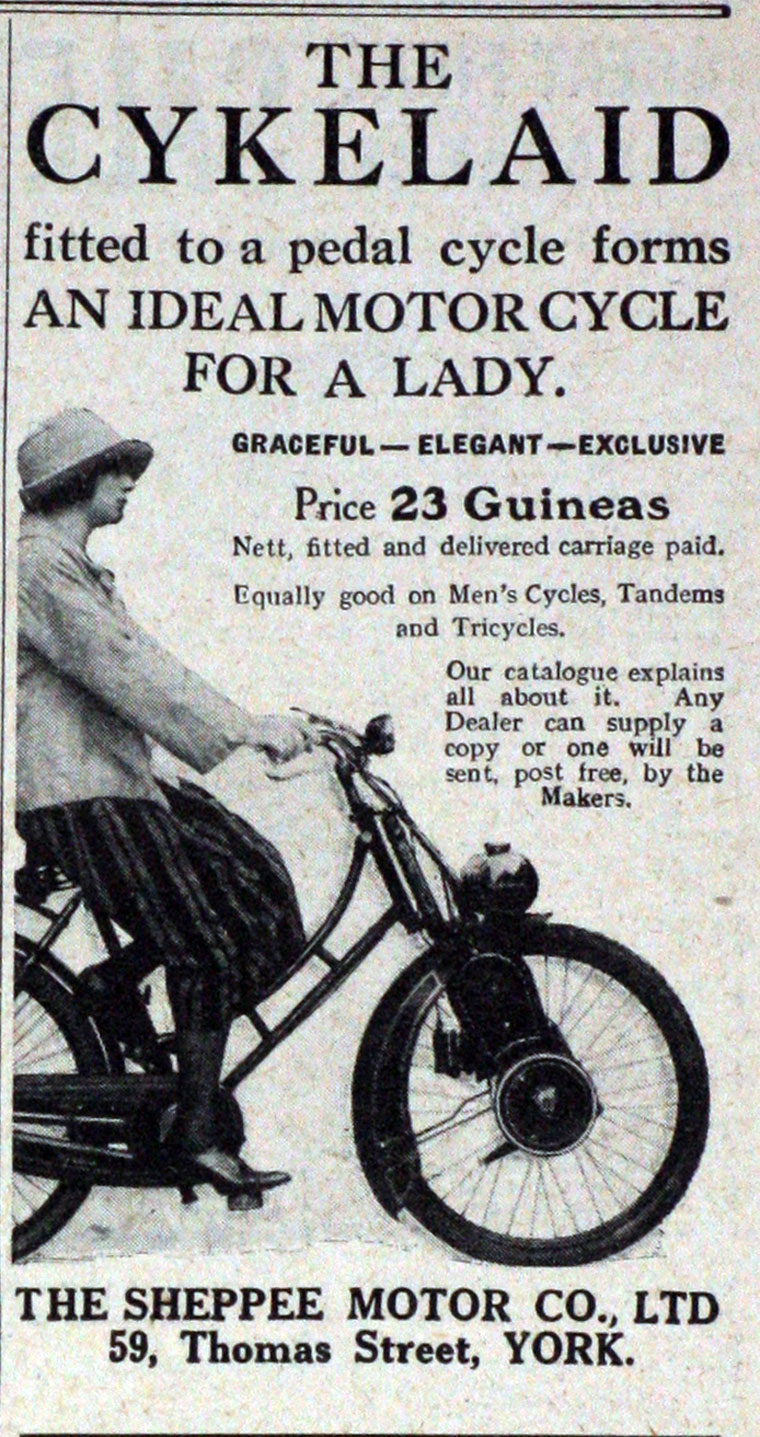 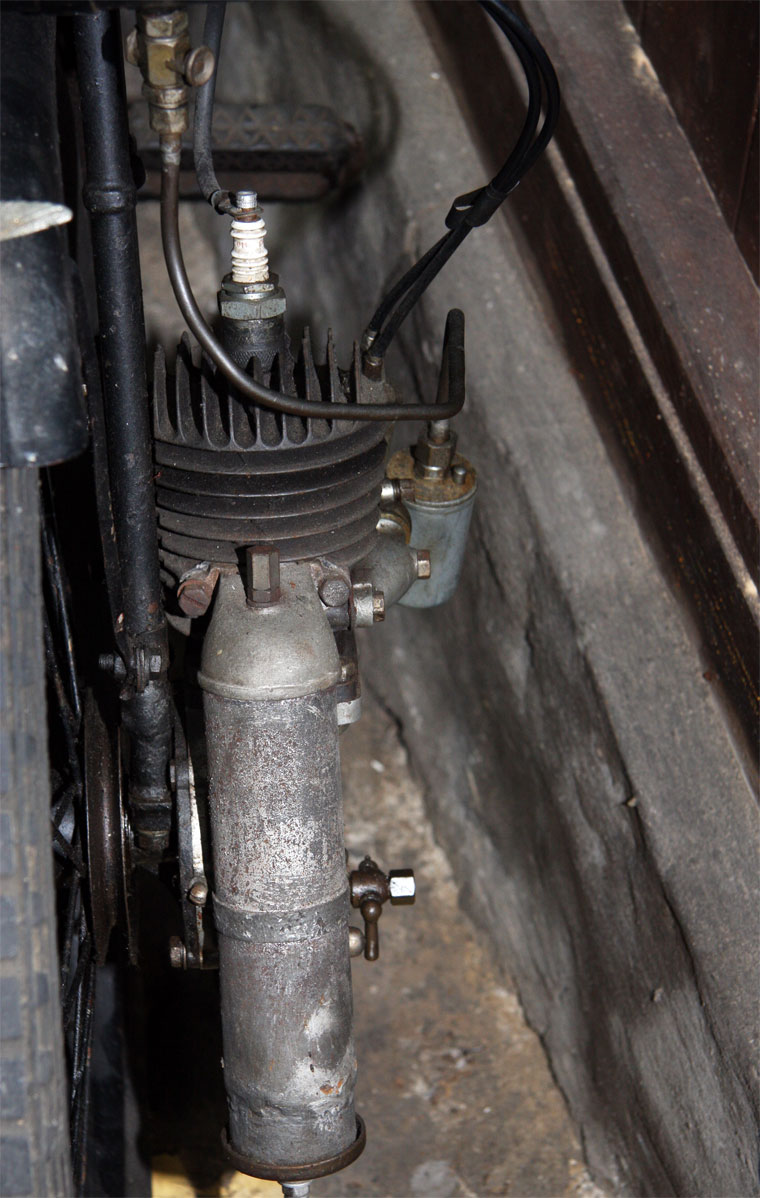 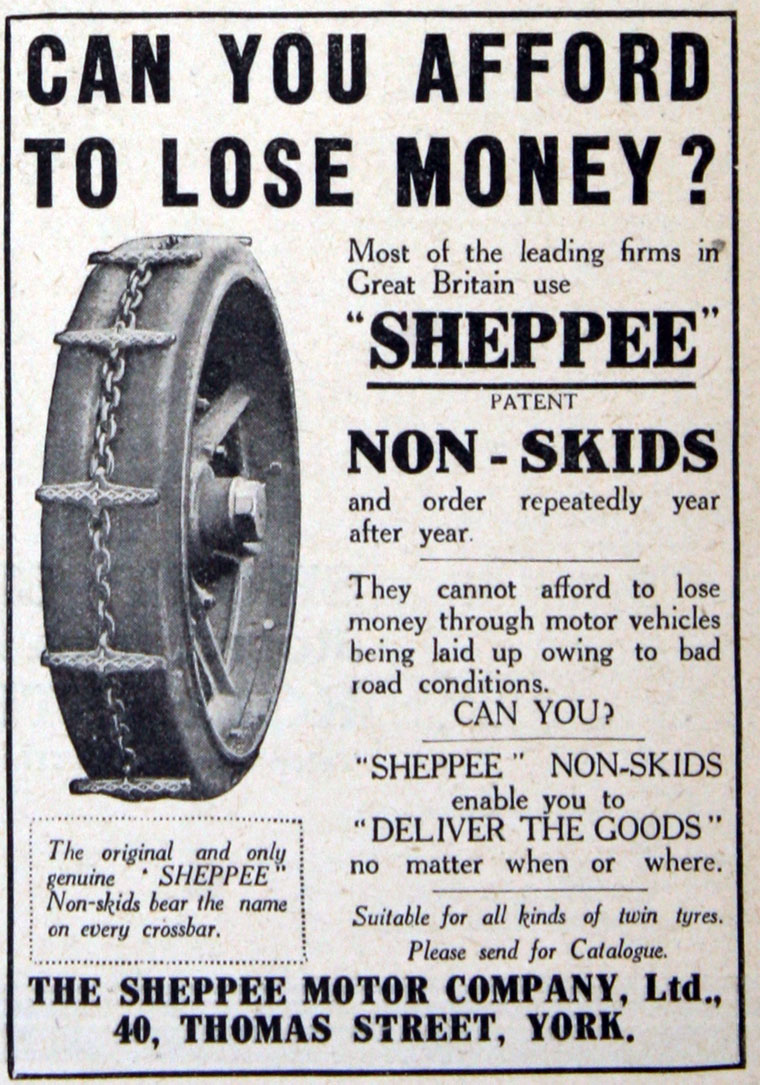 The company was formed by Francis Henry Sheppee

He developed steam powered road vehicles and over 10 years built 14 different models. The boilers were liquid fuelled and produced steam at 900psi.

He also produced the Cykelaid motorcycles from 1919 to 1926.

1908 Produced steam wagon and continued until at least 1914.

1919-1921 The make began as a powered wheel designed to replace the rear wheel of a bicycle and drive it by friction. One advantage of the Cykelaid was that it could be attached to tricycles and tandems as easily as to a solo bicycle.

1920 The machine made its first public appearance in December, at the Olympia Cycle and Motor Cycle Show.

1921 In production the complete power unit was carried on a special front fork, with the 104cc two-stroke engine on the left with its main-shaft run through the wheel spindle to a flywheel. Ignition was by chain-driven Runbaken magneto bolted upside-down to the crankcase base, and transmission was by chain up to a counter-shaft carrying a clutch and then back to the wheel by a second chain. The firm offered a package of wheel, engine unit and front fork or the choice of complete ladies’ or gents’ machines. The complete Cykelaid could be purchased for £50. The specification included an Eadie coaster hub, rear hand-operated brake, number plate, rear stand and Brooks saddle. The wheels were 28"×1.75", shod with Dunlop Roadster tyres. Alternatively, the complete front fork assembly was available for £32, as a conversion of an existing bicycle. The early versions were not fitted with a front brake and, as mentioned above, the complete machine was fitted with two independent rear brakes. Presumably, when buying the front fork unit to convert an existing bicycle, one was also expected to fit an additional rear brake to the machine. Although the engine was lubricated by the petroil mixture, an additional oil tank was fitted. An oil pump driven by the front wheel hub delivered a measured supply of oil to the engine's main bearings. It would, therefore, be inadvisable to allow the engine to run for a long period with the clutch disengaged, since this would cut off the supply of oil to the crankshaft. None of the available options proved to be very popular with the buying public.

1922 Late that year modifications were made and the machine appeared as the New Cykelaid with simplified ignition and a pump system in place of petroil lubrication. Capacity was increased to 133cc and girder forks were added. The wheel size was reduced to 26"×2". Protection for the rider was improved by fitting deep valences to the mudguard and by lengthening the exhaust pipe. A front brake was now fitted. The 133cc two-stroke engine fitted to the left of the front wheel, chain drive via a counter-shaft and a flywheel magneto on the right that was driven by the main-shaft running through the wheel spindle. Although the performance was quite adequate, it had become outdated.

1925 A dummy-rim rear brake was adopted.

The engine unit increased the weight of a cycle by 35lb. It was claimed that it would propel a bicycle at speeds from 3mph to 20mph and that a 100 mile journey could be completed on a full tank of fuel.