Grace's Guide is the leading source of historical information on industry and manufacturing in Britain. This web publication contains 148,469 pages of information and 233,894 images on early companies, their products and the people who designed and built them. 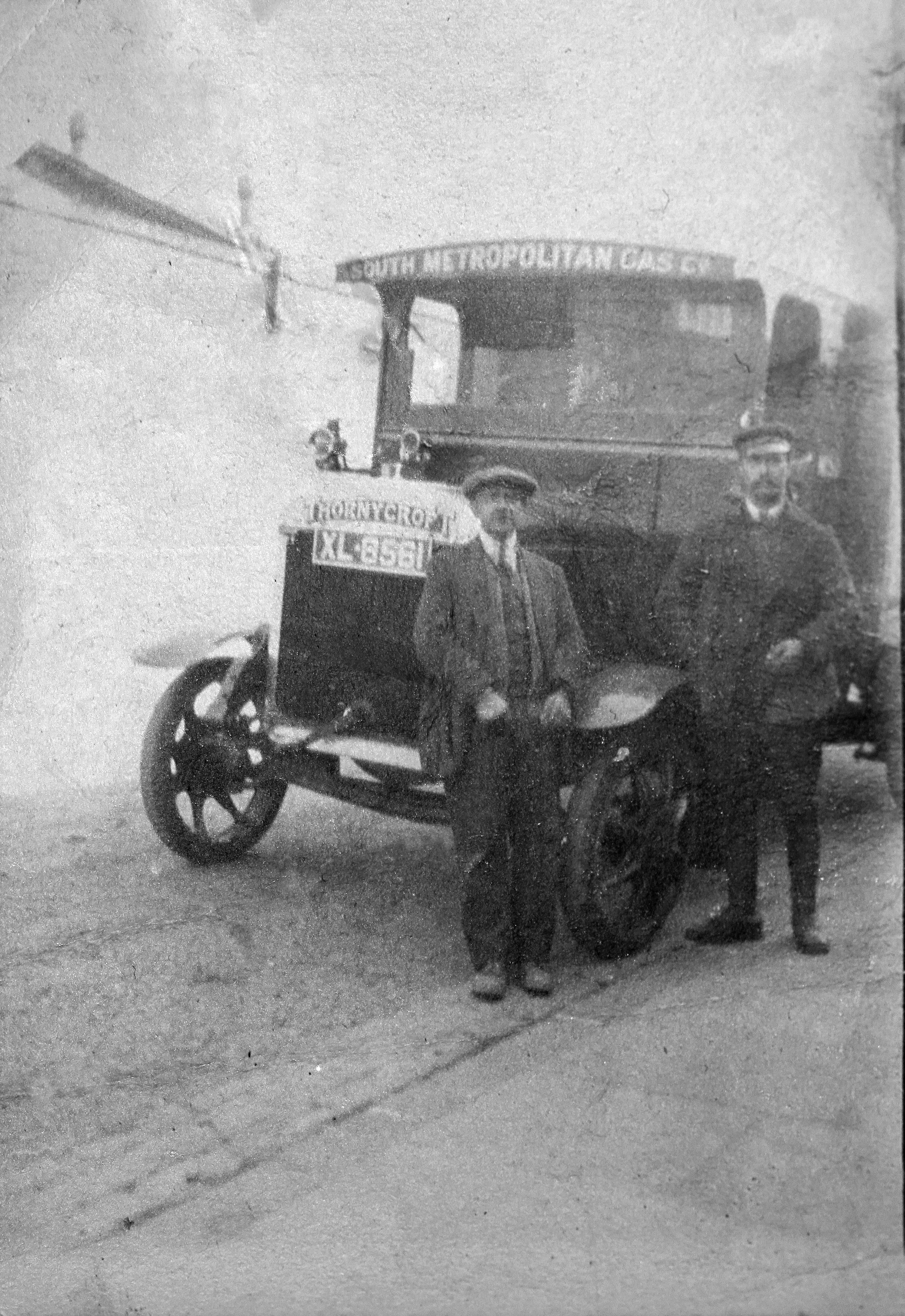 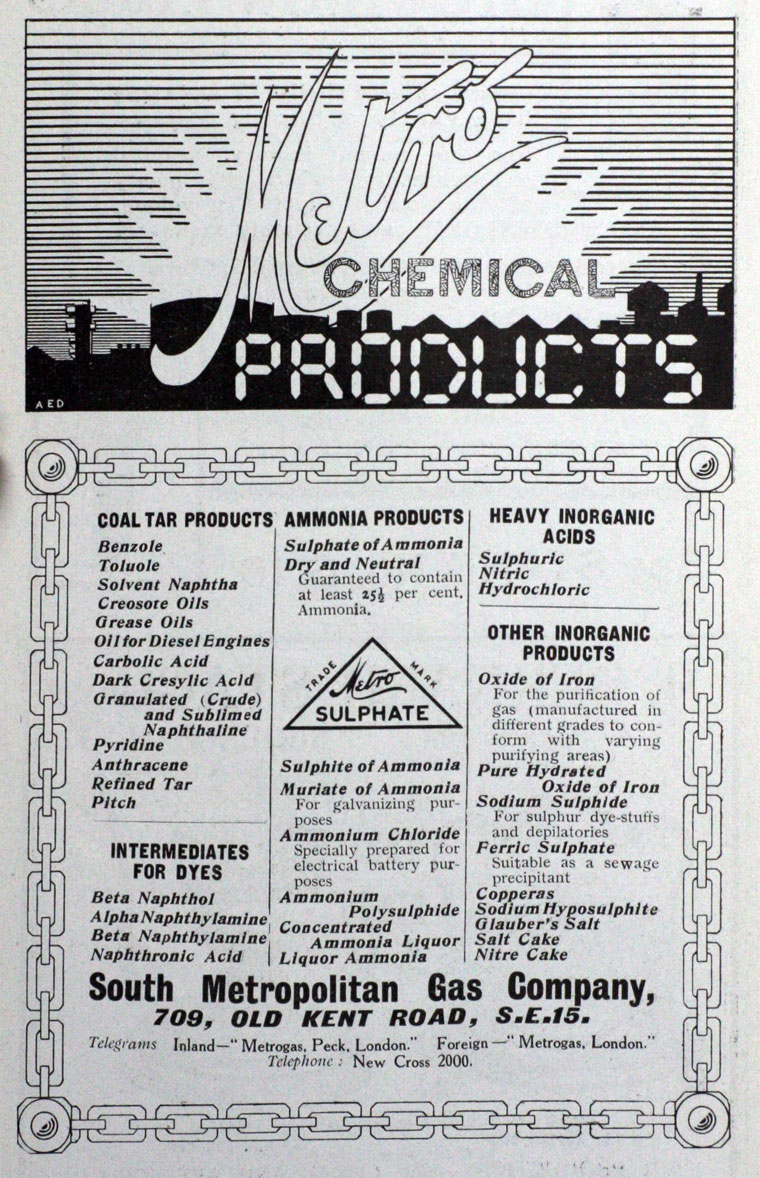 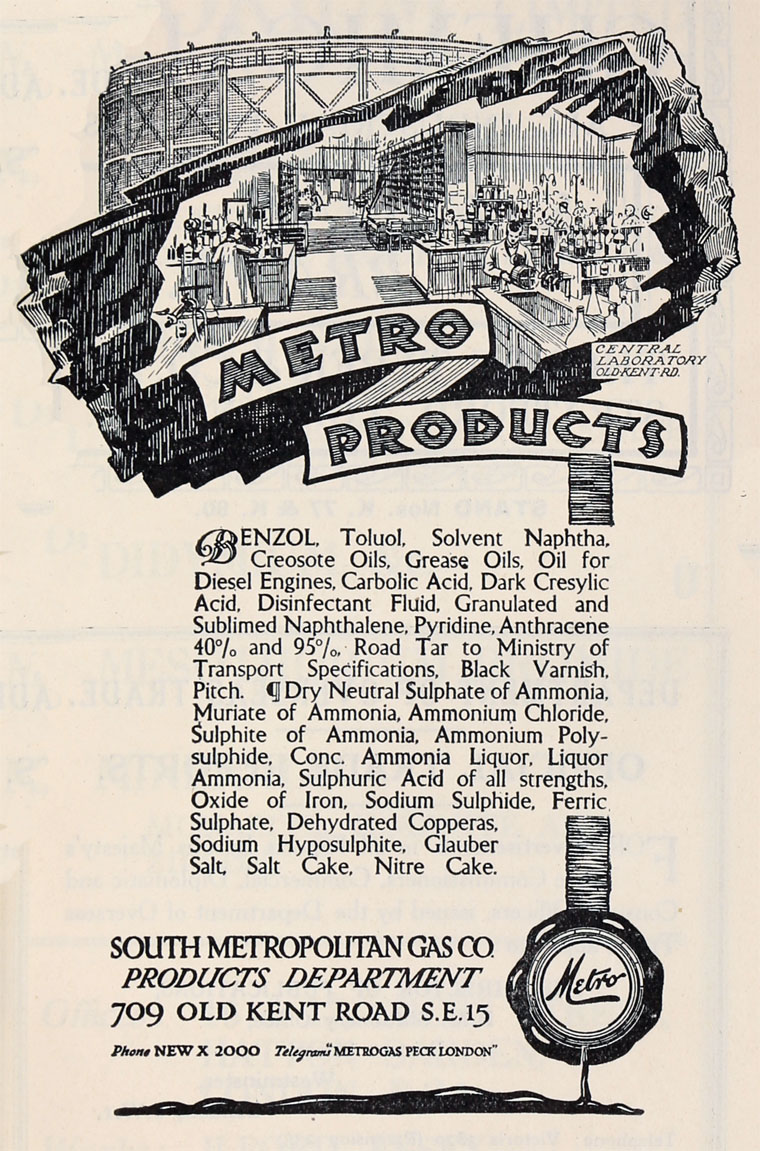 The South Metropolitan Gas Company, the nation's second largest, was a maverick among gas concerns, and was renowned for placing its individualistic stamp all it undertook. From the beginning of the twentieth century the Company adopted a new approach to gas production and utilisation, by supplying gas of unvarying quality to consumers, using appliances which operated at full efficiency without requiring adjustment, manufactured to a set standard.

Following a protracted fight in Parliament, alterations gained to statutory regulations allowed more efficient methods of manufacture and purification. Under the 'Metro' brand name, appliances suitably designed were made by, or produced for, the Company to specified standards.

1833 Its first works were erected on 3 acres of land along the Grand Surrey Canal, on the eastern side of the Old Kent Road. It and the Phoenix Gas Co were described as competing in the sale of "a commodity whose nature, power and possibilities they only dimly understood.[1]

The South Metropolitan Gas Co started operations with the good resolution of supplying the public with a pure article. To that end it built a purifying house, which is described as being a model of all that such a house ought not to be. "Its windows were glazed; there was practically no ventilation, and it is surprising that it lasted so long as 1836, when it was completely destroyed by an explosion." However it weathered through that and many other similar teething troubles, and kept up a stern struggle with its great rival the Phoenix Gas Co.[2]

1880/1 On January 1st 1880, it merged with the Phoenix Gas Light and Coke Co[4]. Though as early as 1853 a working agreement defining the spheres of activity of the two concerns, as well as that of the Surrey Consumers Gas Co - a later competitor - had been come to, largely by the good offices of Thomas Livesey who was secretary and manager to the South Metropolitan Gas Co from 1839 to 1871.[5]

The "South Metropolitan" has always been a progressive company, and the volume tells of the various steps which it took to "get out of the rut." The rule-of-thumb gas fitter was superseded, his place being taken by a trained staff under the company's control; then it established its own physical and chemical laboratories, and devised its own standard apparatus. After trying in vain to get a satisfactory burner from outside, "it applied its chemicals and physicists to the problem, designed its own burner, set up its own burner shop, manufactured its own gauges, and so got the article it wanted." The company, went to work in the same spirit on the problems of heating and cooking, "and in the end made the gas oven and the gas fire indispensable to the house-wife. As gas became more and more of a blessing and less and less of a nuisance, the women of South London became the friends and allies of the 'Metro'. Thus equipped, the company could face with equanimity its new foe in shining armour" It's "new foe" be it said, was electricity.[6]

1884 Amalgamation proposed with the Woolwich, Plumstead and Charlton Consumers Gas Co (incorporated 1835), and the Woolwich Equitable Gas Co, both of which served areas close to the company's new works at East Greenwich[8], the last to be built in the London area.

Post-WWI. Following the First World War, the industry took increasing advantage of more efficient vertical retorts for gas production, with use of carburetted water gas to augment peak demands. However, the South Metropolitan continued to supply gas manufactured from horizontal retorts only.

1920 Dr Charles Carpenter was chairman of the company.[9]

From 1920, to maximise efficiency, tight control was made on coal supplies regarding quality and standards of cleaning. A system of meticulous works inspection was placed over each phase of gas manufacture, ensuring optimum production performance. With this level of control, bringing carbonisation in horizontal retorts to its zenith, the Company were able to claim production efficiencies equal to vertical retorts.

1938 The Bankside property was sold as East Greenwich and other gas works provided the capacity needed.

1939 Together with the Gas Light and Coke Co, the Commercial Gas Co, the Wandsworth and District Gas Co, the South Suburban Gas Co, the company promoted a Bill in Parliament concerning the efficiency of gas appliances to be installed in London[12]

1950s The East Greenwich works were reconstructed after a run-down of plant and standards during World War II, but this was the beginning of the end for town gas manufactured from coal.