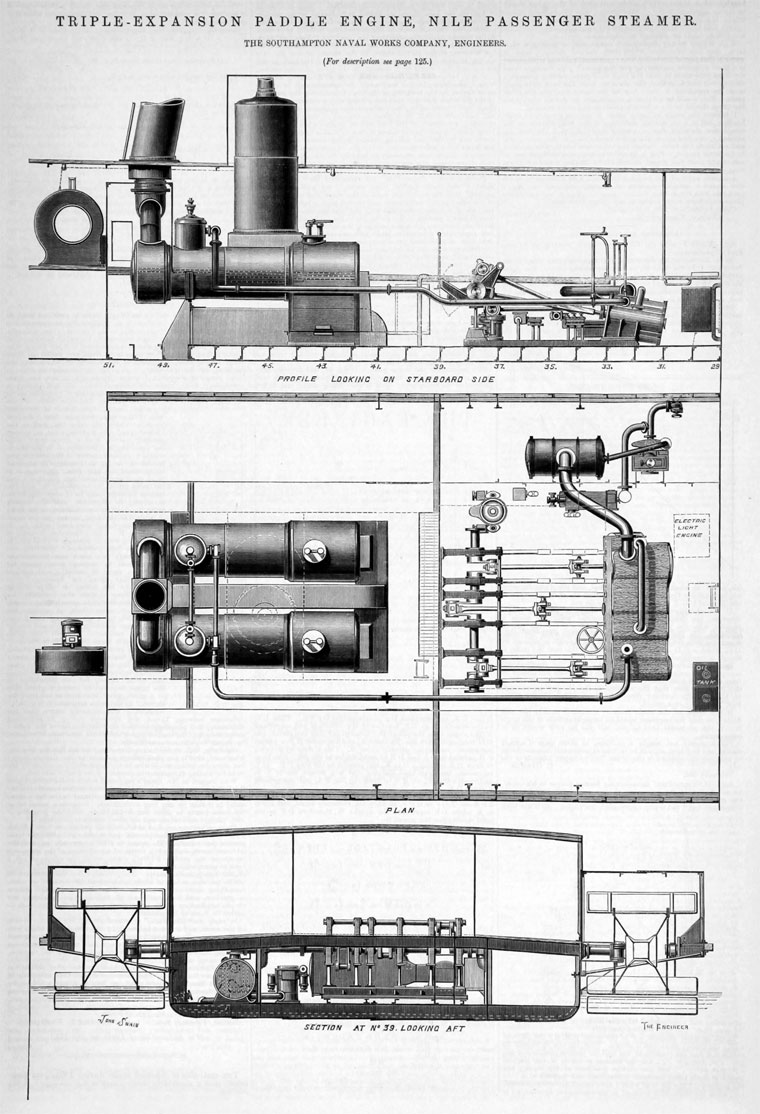 The company was incorporated in 1889 to acquire the business of Oswald, Mordaunt and Co, shipbuilders, of Southampton.

1891 'SUCCESSFUL LAUNCH OF A STEAMSHIP AT WOOLSTON
Some little time since we recorded in our columns the successful launch of a large sailing ship, named Katy, built by the Southampton Naval Works Company and the first vessel constructed by the company. Another vessel, this time a screw steamship of 900 tons, named Faunus, was launched on Saturday morning, and was really the first vessel the company contracted build. The new steamer is 210 ft long, 29ft. 2in. beam, and 15ft 2in. moulded depth. She has been built of steel under special survey, and is placed in the highest class at Lloyds, 100 A1. She has triple expansion engines, the diameter of the cylinders being 13½, 22, and 34 with stroke of 24 inches, designed for speed of 9½ knots. There are two single-ended boilers, with working pressure of 160lbs. The vessel has double cellular bottom throughout, she is of the raised quarter-deck type, with long extended bridge, and she has been specially designed by Mr. J. H. Biles, the general manager of the Southampton Naval Works Company, to suit the requirements of the timber-carrying trade, though accommodation has been provided for four passengers in one state room. The vessel has two masts, and with the view of obtaining the highest speed with the lowest possible consumption of coal, the builders have fitted her with a brass propeller. The new steamer has been specially designed to carry the largest amount of dead weight, and to give the greatest possible speed upon the small dimensions both ship and machinery. In order to achieve this object, there have been introduced the latest ideas with regard to form and machinery, which had been so successfully applied on the Clyde, especially to passenger vessels. The new steamer has been built to the order of Mr. Justus A. Waller, of Gothenberg, for the Concordia Steamship Company, of Newcastle-on-Tyne. The launch took place in the presence of large number of spectators, including many workmen employed in the yard of Southampton Naval Works Company at Woolston. while numbers of people took up position various places from whence a view could obtained, and in addition there were several small boats afloat in the vicinity. The weather was beautifully fine for the occasion, and everything passed off without the slightest hitch, admirable arrangements having been made by the manager. Mr. Currie. .....'[2]

1891 'LAUNCH FROM THE SOUTHAMPTON NAVAL WORKS. TO-DAY. There was launched in most successful style, on Thursday, the s.s. Rosendael, from the yard of the Southampton Naval Works, which has been built to the order of Messrs. Weatherley, Mead and Hussey, merchants, of London. The vessel was decked with bunting and, like the last ship launched from the yard, had her engines and two masts already fitted. ....
Mr. Gearing (manager of the machinery department) acknowledged the toast, but explained that he was not at Woolston so much as he should like just yet, because by the courtesy of the Company he was now occupied with one of the large steamers of the Inman Company. He added that he was there for six months in Messrs. Oswald and Co.'s time, and remarked on the misery that fell upon the place consequent on the discharge of 1,500 men, and closing of the yard. The construction of the Rosendael's machinery had been under his care, and he hoped and expected that that part of the vessel, at least, would give satisfaction. ...
The dimensions of the Rosendael are — Length over all, 169 ft. ; extreme breadth, 24ft. ; depth (moulded) 11ft. 9½in.; gross tonnage, 450 tons, She has a long quarter and bridge with deck and forecastle and has been designed for the Company's regular traffic between London and Dunkirk, under the command lof Captain Guild. She is fitted with two large hatches, three steam cranes for working the cargo, arid two steam winches. The steam steering gear is amidships, and Clark Chapman's steam windlass is provided. She is fitted to carry water ballast in the fore and aft peaks and has a double cellular bottom. Accommodation for the captain and passengers is placed amidships. The engines are of the triple expansion type with cylinders of 13½, 22 and 34 inches with a stroke of 24. A large boiler is used capable of a pressure of 160lbs., and will develop a speed of 13½ knots.' [3]

Eighteen vessels had been built under the management of Biles. These included two paddle steamers, Windsor Castle and Prince of Wales. The latter was built with a hogged keel (Biles having noted that elderly paddle steamers tended to develop a sag amidships).[5]

1891 'THE SOUTHAMPTON NAVAL WORKS. The first meeting of the creditors .... Mr. E. F. Coates, on behalf of the petitioning creditors has submitted the following scheme for the reconstruction of the company:— A new company to formed, called the Woolston Shipbuilding Company, with a capital of £125,000 to shares, divided into £50,000 5 percent, preferred, and £75,000 ordinary shares, with ordinary borrowing powers. The receivers for the debenture holders to make arrangements with the liquidator of the Southampton Naval Works Cempany for the whole of the assets of the Southampton Naval Works Company to be handed over to the Woolston Shipbuilding Company,....' [6]

1893 Extract from examination in London Bankruptcy Court: 'Mr. John Havard Byles, examined by the Assistant Official Receiver, said he had been the manager of the Southampton Naval Works and was acquainted with shipbuilding since he was 14 years of age. He was now 40, and had been enaged in shiipbuilding all that time on the Clyde and elsewhere. He accounted for the losses on the shipbuilding by the non-delivery of materials, the fire strikes, and errors in quantities. The shipbuilding was taken at a low price. It was no use trying to get orders for the yard unless some first-class work was going on.'[7]