Detail of crane at the former Dudbridge Wharf, Stroud 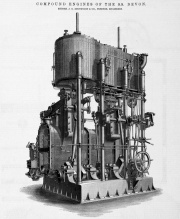 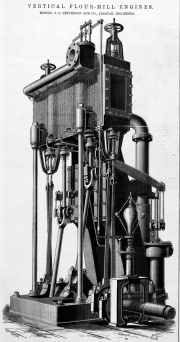 It appears that the foundry was previously owned by J. Lindsay and Co, as a bell at Brindle St Joseph’s Church in Preston bears the date and name 1828 J Lindsay and Co Canal Foundry Preston [1]

c.1849 Supplied two 10-ton cranes for Gloucester Docks. The pillar and base of one remain in situ. [3]

1854 5-ton hand crane at the site of the former Dudbridge Wharf, Cainscross, Stroud, Glos. The land now belongs to a haulage company, but the crane can be viewed through steel railings from the canal towpath (Stroudwater Canal Co). Cast into the crane's main frame are the words 'John Stevenson Canal Foundry Preston'. Further information about the crane is available online [4] [5] [6]

1863 'Foundry Accident at Preston. — On Thursday afternoon an alarming accident occurred at the iron foundry of Mr. J. Stevenson, of Pitt-street, Preston. In one portion of the works there is large wooden building used for fitting up and completing machinery cast at the foundry. The building is open from top to bottom, and near the roof, about 40 feet from the floor, there is a large travelling crane, used for hoisting and removing the machinery below. A very large blast-furnace engine, which had been temporarily fixed up, was being removed in portions to the yard, and three labourers, named Sargent, Standring, and M'Quid, were working the crane. They had got several heavy pieces out of the building, and afterwards, whilst lowering the air chest of the engine, which was an enormous casting, weighing upwards of seven tons, the crane gave way, then broke in two, and, along with the men named, fell to the ground. The casting which they had been hoisting of course fell also, and in its descent it caught a massive iron frame belonging to the engine, smashed the top of it, and then turned over and fell upon Sargent, who would have been crushed to atoms if it had not been for the fact that there was bracket beneath the iron casting which raised slightly off the ground on one side. Sargent happened to fall on that side, and the opening caused by the bracket prevented the casting from resting upon him. As it was he was dreadfully injured ; his head was cut and his thigh was shockingly fractured. The other two men fell upon the castings, and were very badly hurt. At the time the air chest fell there were two engineers superintending the descent and standing almost directly beneath the crane. One of them was injured by some falling timber.'[8]

1875 'BROWNHILLS COLLIERY COMPANY'S NEW SINKING. INTERESTING CEREMONY. At the Brownhills Colliery Company's new sinking near Tunstall, and a short distance from the Brownhills Tollgate, the ceremony of starting for the first time a pair of winding engines was performed on Saturday morning, in the presence of a number of gentlemen interested in the coal and iron trades oi: the district. The engines are of the horizontal type, of 200 nominal horse power, with 30-inch cylinders working a stroke of 5ft. 6in., and are mounted on massive cast iron bed plates. They are fitted with tappet valves, and the tappet shafts are supported by handsome fluted columns of polished cast iron. The details of the reversing motion are somewhat novel construction, and have been designed with the view of rendering the handling of the engines by the winder as easy as possible, and the wear and tear of the different parts to the lowest possible points. That this desirable end has been accomplished by the designers, is apparent in the ease with which the engines are kept under perfect control. The principal wearing surfaces of the valve motions are of steel, also are the piston rods. The winding drum is constructed in three rings with neat, pannelled arms and a brake rim each side. The brake power can be applied either by steam or foot, or both if required The steam brake cylinder is placed between the engines, below the floor, in a horizontal position, and is brought under the engineman’s control by a handle, placed close to the reversing and starting apparatus on the winding stage.
Steam is supplied by two Lancashire boilers, 7ft in diameter, by 30ft. long, with double flues, each containing three Galloway tubes, and strengthened over the furnaces, by bowling expansion hoops. The boiler front plates, with the angle irons, are turned up in the lathe and the flues are bored out. They are double rivetted in the longitudinal seams, and the flue plates are welded in one continuous ring, without any horizontal rivetted seam.
Both engines and boilers are very creditable to their designers and makers, Messrs. John C. Stevenson and Co., Canal Foundry, Preston ; and the Brownhills Company are certainly in advance of some of their neighbours in the possession of first-rate plant for raising the rich minerals of the district. The work has occupied about three months. At half-past ten , Saturday morning, the engines, which were decorated with flags were formally started by Mr. Gilderoy, the company's manager, and work was once commenced by winding water out of the shafts.
The ceremony over, the company — which included . Messrs. Catling, Norris, Bowen, Gilderoy, and Price (representative of Messrs. Stevenson and Co ) -adjourned to the counting house....[9]

1883 Dissolution of the Partnership between Charles Birley, Hutton Birley, and John Crawford Stevenson, under the style of John C. Stevenson and Co., at Preston, in the county of Lancaster, in the trade or business of Ironfounders and Engineers, so far as concerns the said John Crawford Stevenson. All debts will be received and paid by the said Charles Birley and Button Birley, by whom the said business will henceforth be carried on.[10]

1888 'FATAL ACCIDENT.-A shocking accident occurred on Monday evening at Messrs. Stevenson and Co.'s Canal Foundry, Pitt-street, Preston, Some of the men were engaged in lifting a large circular pan, weighing between six and seven tons. The work was being performed by means of a crane, and the pan had been safely hoisted upon its edge, so as to lean to one side. To turn it round and cause it to fall into the required position, William Brittain, of 83, Aqueduct-street, placed his back beneath the pan, and at the same moment the hook supporting it broke, and the pan fell, crushing him to death.'[13]

1889 Introduced a Dry Cold Air Machine for establishments of moderate size, such as hotels.

1890 Article and illustration of their hydraulic pump for gunpowder manufacture. Stevensons made a granulating machine which had met with great success, not a single accident having occurred in this most dangerous part of the manufacturing process; also made machines for incorporating, mixing, and breaking-down ingredients for the manufacture of gun-powder.[14]

1891 'DISSOLUTION OF AN OLD PRESTON FIRM.- PRESENTATIONS. On Saturday evening, the employee of Messrs. Stephenson and Company, engineers, Canal Foundry, assembled at the North Western Hotel. for the purpose of presenting testimonials to Mr. J. T. Southworth, foreman of the works, and Mr. Mitchell, foreman in the boilermaking department. The extensive premises have been bought by the London and North Western Railway Company for purposes of improvements, consequently, the old establishment and well-known firm of Stevenson and Co. will be dissolved. The machinery has been purchased by Messrs. Friedenthall, as a sort of speculation, as it is thought the firm will not run the plant as a whole. Part of it will go to supplement the machinery in their establishmlent in Fylde-road, and the other will, no doubt, be sold. The dissolution of Stevenson and Co. will be a matter of considerable regret in the town, as large numbers of people have been employed, and the best possible feeling has existed between the employers and workmen.....'[16]