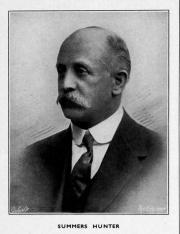 1915 Member of the Departmental Committee on Bulkheads

1929 Retired as chairman of the North Eastern Marine Engineering Co

"..Summers Hunter, which occurred at the age of 84, on Sunday, January 7th , at his home, Darien, Stocksfield, Northumberland, Great Britain has lost an outstanding marine engineer, who was known not only in Tyneside circles, where most of his life was spent, but in all parts of Great Britain and the continent.

He came from Scotland, and was born in Inverness in 1856. His early education was received in Scotland, but he started work at the early age of 14, and was apprenticed to a Staffordshire firm of name Barker and Cope, which at that time had extensive works at Kidsgrove in North Staffordshire. His technical studies were completed at the science classes which were held at the Wedgwood Institute in Burslem. During his early days he was fortunate in meeting and working for well-known men of his time who had an unforgettable influence on his character, and led his steps in the right path. Among these were Mr. George Elliott, Mr. George Bidder, better known perhaps as the "Calculating Boy," and also Mr. S. Bidder, all of whom were successful civil engineers.

Before his training was completed young Hunter was placed in charge of various important contracts, which he carried through on behalf of Messrs. Barker a nd Cope, and thereby gained valuable experience in the different branches of engineering which at that time were associated with the industries of North Staffordshire. It was about 1880, at the age of 24, that he decided he must take up marine engineering as his vocation, and to that end he joined the North Eastern Marine Engineering Co. , Ltd., and entered the Sunderland Works. After serving in the shops for some time he went to sea and obtained his Chief Engineer's Certificate. During his time he suffered shipwreck, which imprinted on his mind a full appreciation of the dangers and responsibilities which are inseparably associated with the duties of a marine engineer. When the new Wallsend works of the company were built he was appointed to the technical staff, and in 1895 was made the general manager of the company. In 1899, he was elected to a seat on the Board, and in the following year was appointed managing director. Twenty years later he became chairman, a position he continued to hold until he retired in 1929, after serving the company for 49 years.

Summers Hunter was associated with several advances in marine engineering; one was superheating, which was introduced in order to achieve a greater economy with reciprocating steam engines. The North Eastern Marine Engineering Company took up the "Schmidt" system of smoke-tube superheaters, and developed it successfully. With the advent of the oil engine, the company became associated with the Werkspoor Company, of Amsterdam, and North-Eastern-Werkspoor engines have been fitted in many successful motor ships. The main business of the fir m was, however, steam engines and boilers, and during the time Mr. Summers Hunter was with the firm a considerable advance in the design and performance of marine steam engines was recorded, especially after the introduction of increased superheat and re- heating. With the coming of the oil engine, considerable study was given by the firm to the problems connected with the production of special cast irons for marine engines, and for some time Mr. Summers Hunter was v ice-president of the British Cast Iron Research Association. He was a strong advocate of advanced methods in workshop practice, and with the introduction of electric power on the Tyne was among the first to use that power for driving machinery and cranes. The Wallsend works of the company were electrified in 1900, and the following year electric power was installed in the Sunderland works, the company being for a long time one of the largest consumers of electric power on the Tyne.

He was keenly interested in young engineers, and many of the men who now occupy responsible positions in the firm were apprenticed to it, and served under Mr. Summers Hunter in the shops. The improvement of the conditions in the engineering branch of the R oyal Navy was also one of his keen interests. During the last war Summers Hunter was an active member of many Government Committees, and his service to the industry and the nation was recognised in 1918 when he was made a Commander of the Order of the British Empire. He held for some years the position of chairman of the Standing Committee of the North East Coast Engineering Employer's Association, and was for some years a member of the Council of Armstrong College, Newcastle-upon-Tyne, and showed great interest in the engineering and naval architecture courses of the College. During his whole career Summers Hunter took the keenest interest in the work of the scientific institutions and technical associations, and from 1908 to 1910 he was President of the North East Coast Institution of Engineers and Shipbuilders. It was during his term of office that the Institution moved from its old premises in St. Nicholas Buildings to its present home in Bolbec Hall. In 1932 the Institution conferred upon him its Honorary Fellowship, in recognition of his pioneer work in the training, education, and welfare of apprentices and his personal interest in the progress of the work of the Institution. He was also President of the Institute of Marine Engineers for 1912-1913 , and a member of the Institution of Civil Engineers, the Institution of Mechanical Engineers, the Institution of Naval Architects, of which he was a Vice-President, the Institute of Metals, and the Royal Society of Arts.

Alongside the work of his own firm he found time to interest himself in some other businesses, and was for some years a director of the Iron Trades Employers' Insurance Association, the Hydrogen, Oxygen, and Plant Company, Liquid Oxygen Explosives, Ltd., and the Tyneside Tramways and Tramroads Company.

Summers Hunter will be remembered by his unswerving integrity, and his technical skill and sound practical judgment which brought its own reward in a successful and useful career."

SUMMERS HUNTER, C.B.E., will be remembered for his distinguished work for the shipbuilding industry on the North East Coast. During his long connection with the North Eastern Marine Engineering Company, Ltd., of Wallsend on Tyne and Sunderland, he was associated with several notable developments in marine engineering; moreover, he was keenly interested in the work of several technical societies, in many of which he was a leading figure; and he found time to devote much attention to the training and welfare of apprentices.

Mr. Hunter was born in 1856, and after receiving his early education in Inverness, he went to Burslem, Staffs, and in 1870 became an apprentice in Messrs. Barker and Cope's general engineering works at Kidsgrove. At this time he studied at the Wedgwood Institute, Burslem. In 1880, however, he turned his attention to marine engineering, and joined the North Eastern Marine Engineering Company, for whom he worked on the installation of marine machinery. In 1881 he went to sea as guarantee engineer on behalf of the firm and passed for chief engineer in 1882. He then returned to the company's Wallsend works as outside manager, and was promoted to be assistant general manager in 1889 and general manager in 1895. He became general manager of both works, at Wallsend and Sunderland, in 1900 and was also made a director.

Shortly afterwards he was appointed managing director, and in 1920 he became chairman, a position which he occupied until his retirement in 1929. Among the principal advances in marine engineering with which he was associated were the introduction of superheating, and the development of the marine oil-engine. Mr. Hunter was keenly interested in the production of special cast irons for marine engines, and was a former vice-president of the British Cast Iron Research Association. He was also an early advocate of the use of electric power for driving cranes and workshop machinery.

During the Great War he served on several Government committees and was awarded the C.B.E. for his national services. For several years he was chairman of the Standing Committee of the North East Coast Engineering Employers' Association and he also served on the council of Armstrong College, Newcastle upon Tyne. He was also a director of the Iron Trades Employers' Insurance Association, and of Liquid Oxygen Explosives, Ltd., and the Tyneside Tramways and Tramroads Company.

Mr. Summers Hunter, one of the leaders of marine engineering in this country, died at his home at Darien, Stocksfield, Northumberland, on January 7, 1940.

Mr. Hunter began his engineering career at the age of 14, when he started work as an apprentice. Later, in 1880, he joined the North Eastern Marine Engineering Company, Ltd., and served first in the workshops and then as a sea-going engineer.

Afterwards he was appointed to the company's new Walisend works, becoming General Manager, and finally Managing Director in 1900.

In 1920 he was appointed Chairman, a position which he held until he retired in 1929 after 49 years' service with the company.

Among other improvements to steam engine design, Mr. Hunter introduced the Schmidt system of superheating, which met with immediate success. He was interested also in Diesel engines, and engines of this type built by the firm were also highly successful. By the introduction of electric power throughout the workshops, as well as other labour-saving devices, Mr. Hunter did much to improve the workshop conditions.

Mr. Hunter took an active part in public life and in local government. During the war of 1914-18 he served on many Government committees and was given the C.B.E. in recognition of his services. He was an active member of many civil and marine engineering institutes and, in 1932, was elected an Honorary Fellow of the North East Coast Institute of Engineers and Shipbuilders, in recognition of his contributions to the development of marine engineering.