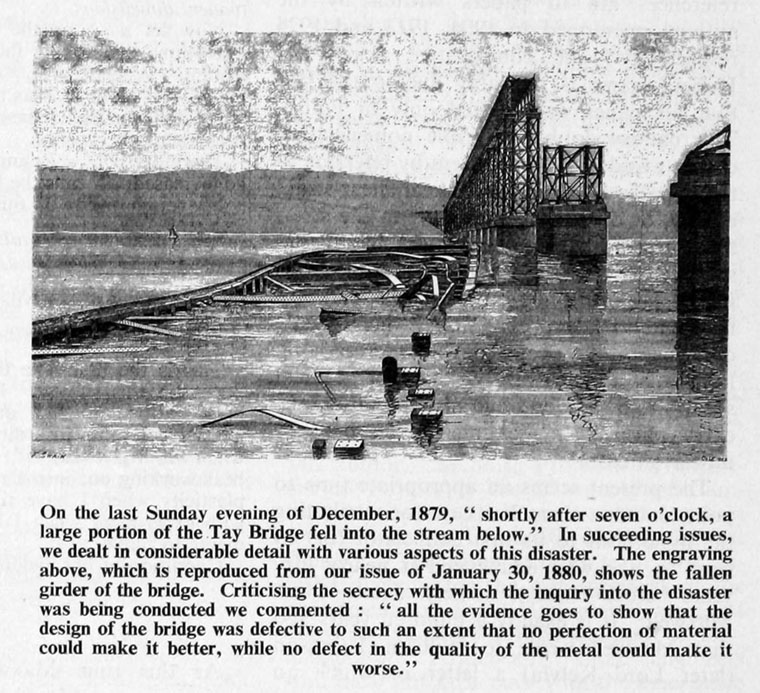 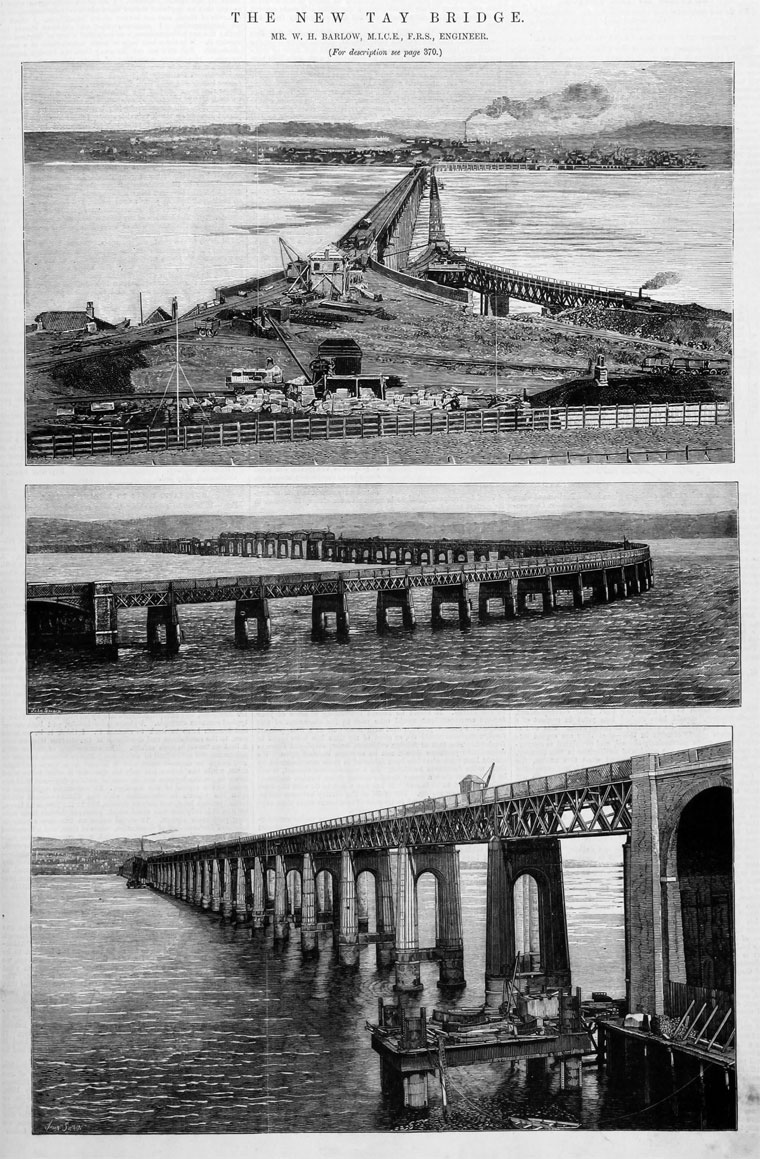 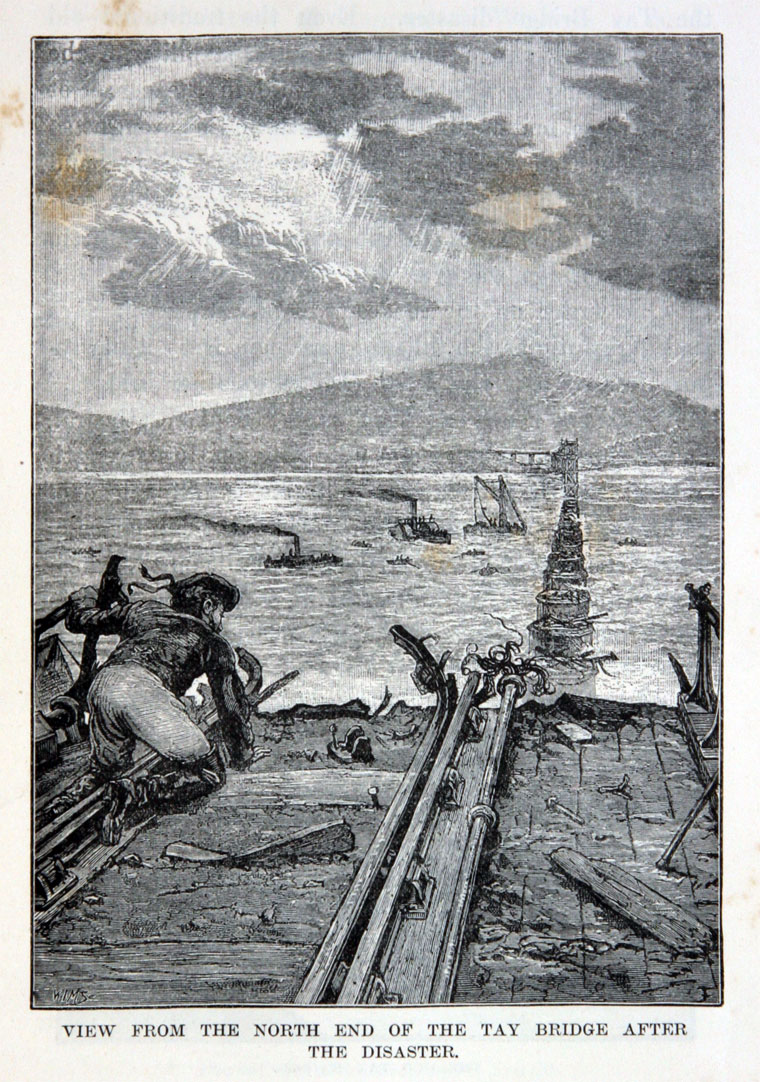 North End after the disaster. Picture published in 1894.

The new bridge. Picture published in 1894.

The old bridge. Picture published in 1894. 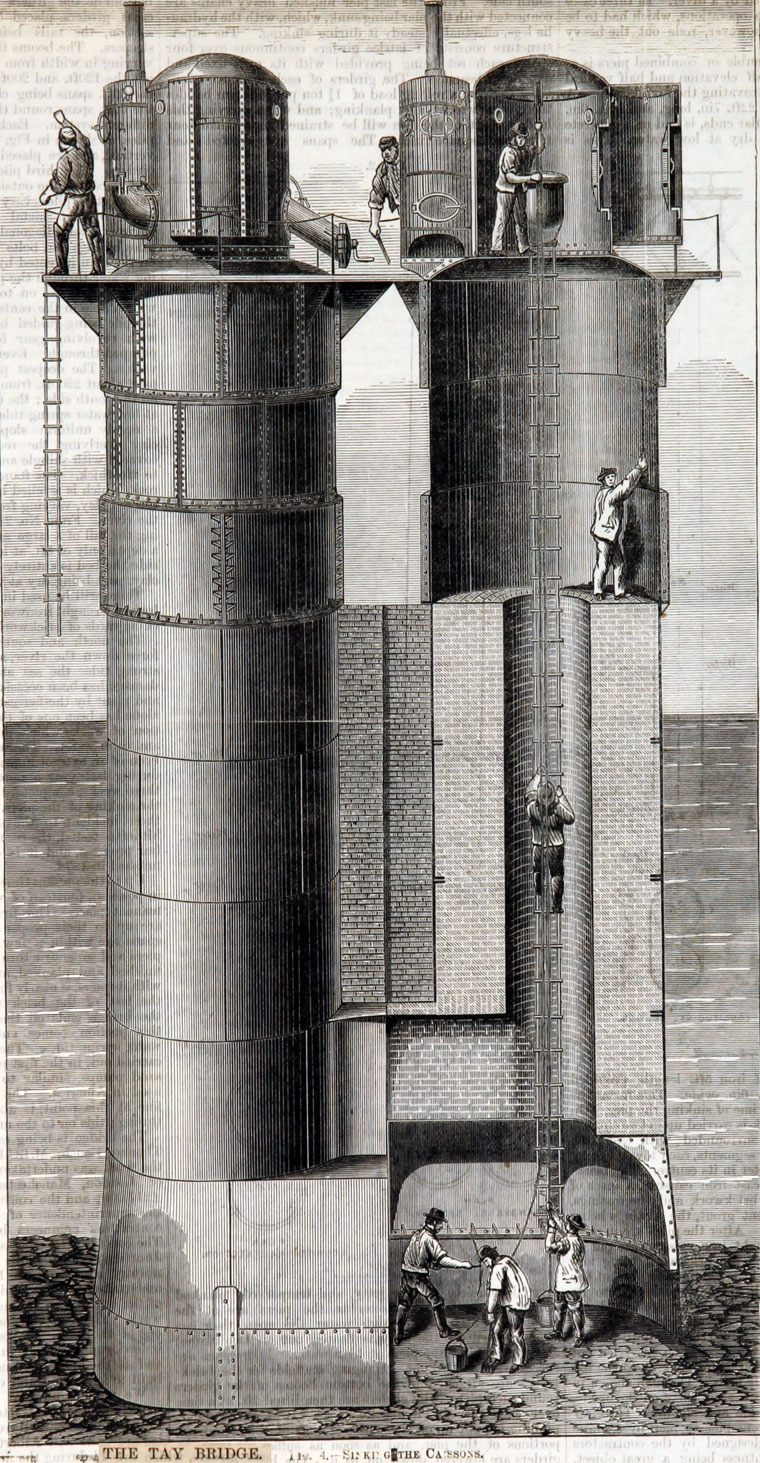 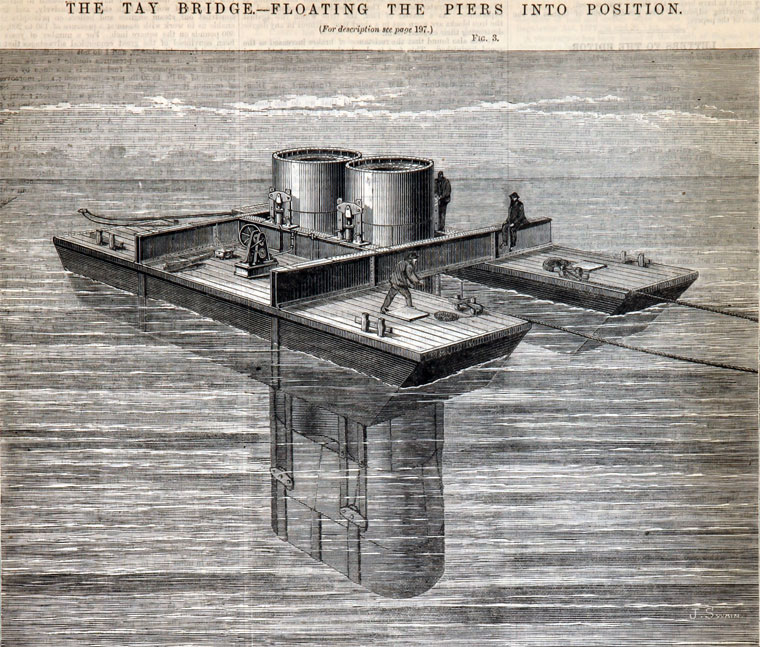 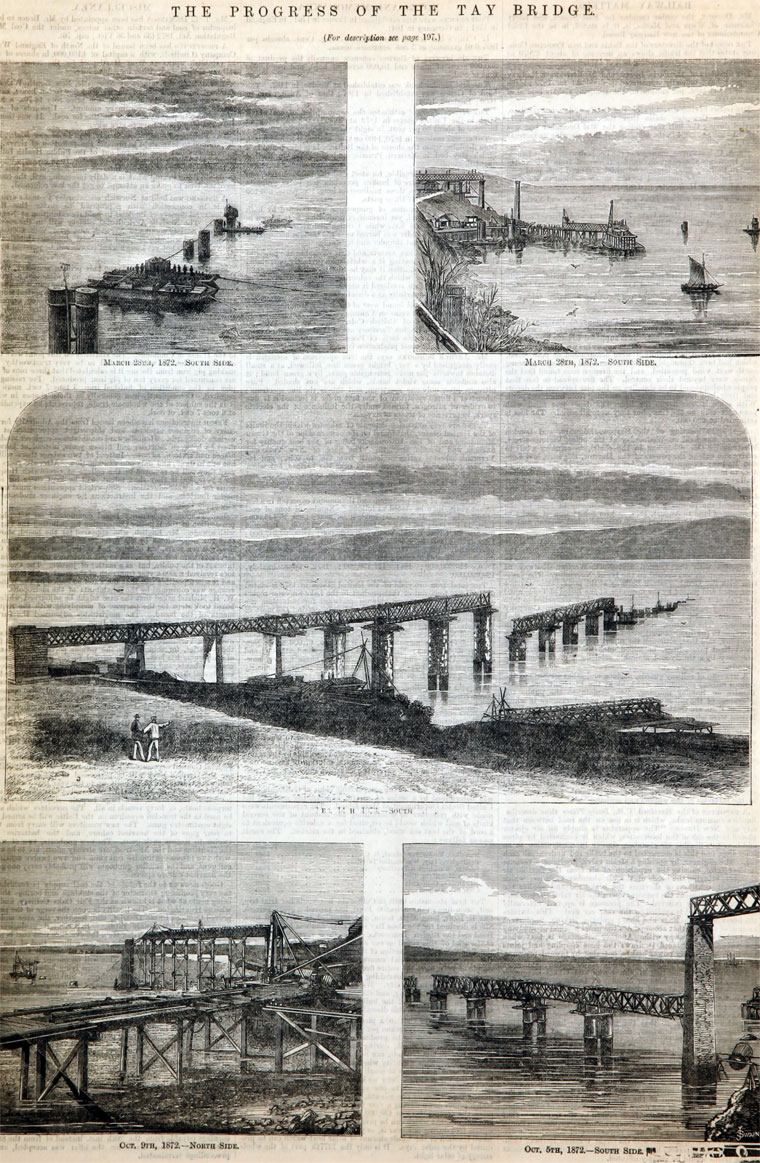 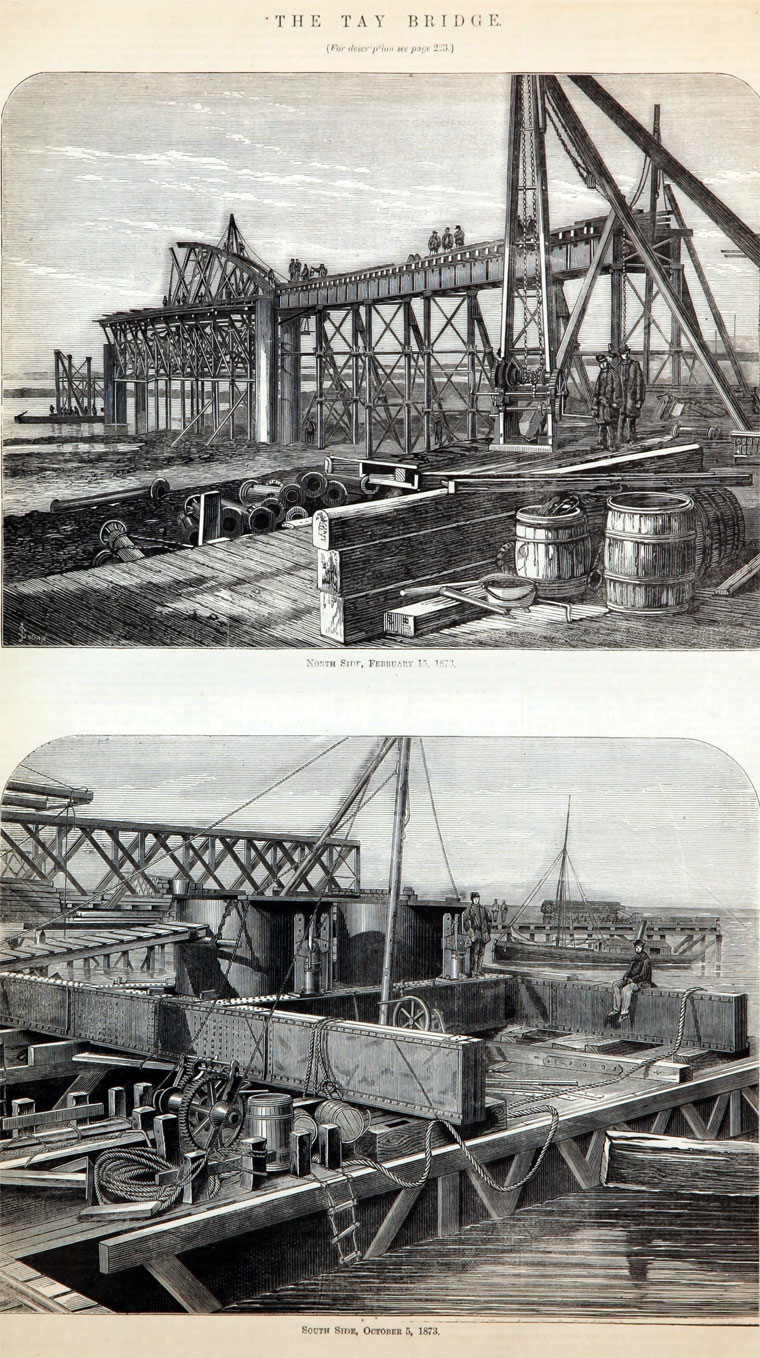 1876. Method of Floating Caissons into Position. 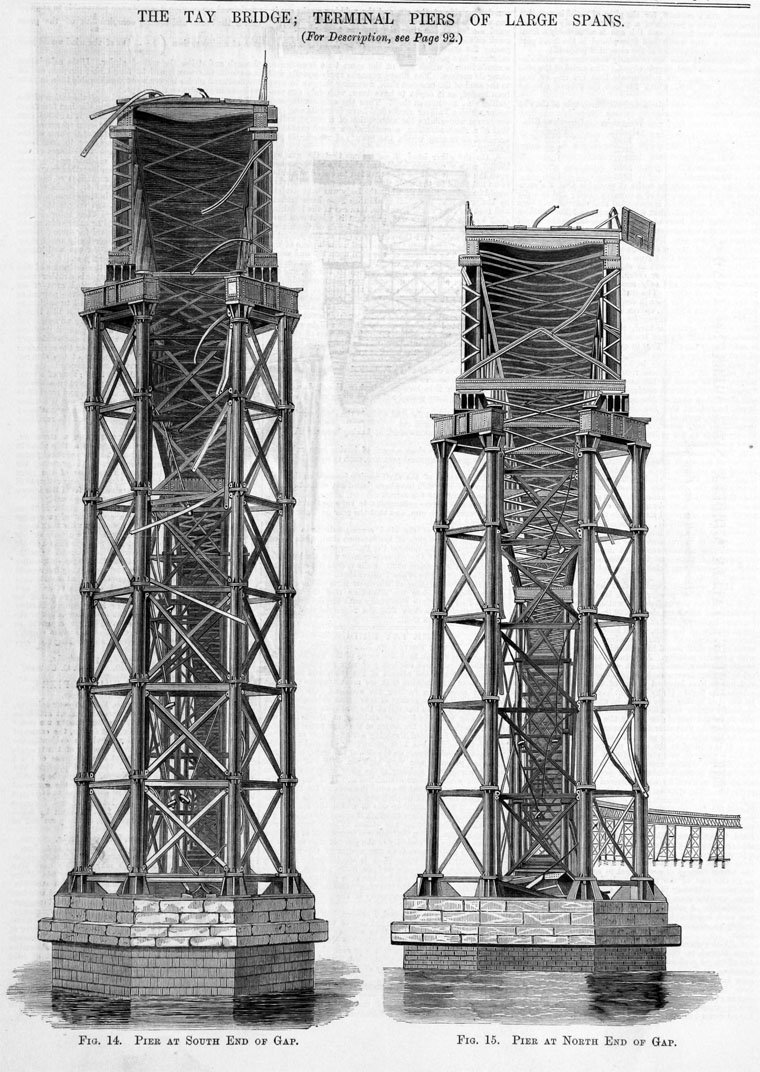 View from Dundee to Wormit 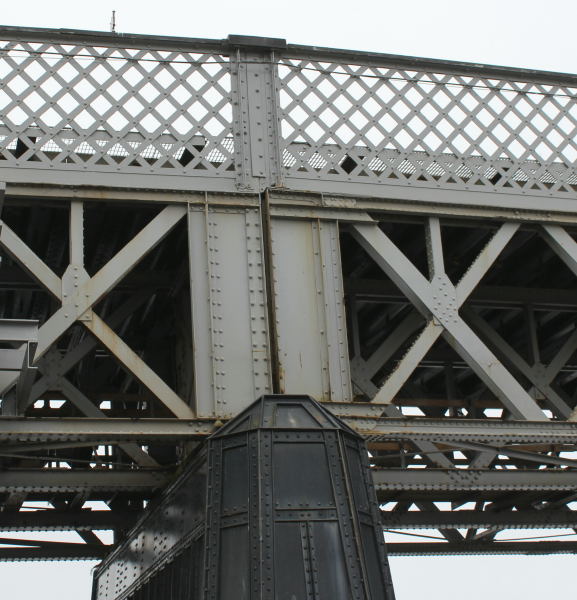 Many of the original girders were re-used. There are detail differences at the ends of the two shown here. Old and newer?

Wrought iron skew arch bridge over the A85, Dundee

The Tay Bridge (sometimes unofficially the Tay Rail Bridge) is a railway bridge approximately 2.25 miles long that spans the Firth of Tay in Scotland, between the city of Dundee and the suburb of Wormit in Fife.

The original Tay Bridge was designed by Thomas Bouch, who received a knighthood following the bridge's completion. It was a lattice-grid design, combining cast and wrought iron.

Proposals for constructing a bridge across the River Tay date back to at least 1854.

1871 Contractors were De Bergue and Co; the contractor's engineers were Albert Grothe and Edward Robert Austin.

As the bridge extended out into the river, it shortly became clear that the original survey of the estuary had not been competent. The bedrock, at a shallow depth near the banks, was found to descend deeper and deeper, until it was too deep to act as a foundation for the bridge piers. Bouch had to redesign the piers, and to set them very deep in the estuary bed to compensate for having no support underneath. He also reduced the number of piers by making the spans of the superstructure girders longer than he had originally planned.

1873 After Charles de Bergue was taken ill, Hopkins, Gilkes and Co took over the foundry that had been constructed and completed the contract for the bridge.

1878 June 1st. The bridge was opened was the longest in the world at that time. When completed it was 10,395 feet long, was carried on eighty-five piers, with spans varying in width from 29ft to 245ft, and accommodated a single line of rails.[1]

1879 December 28th. At 7.15pm, the first bridge collapsed after its central spans gave way during high winter gales. A train with six carriages carrying seventy-five passengers and crew, crossing at the time of the collapse, plunged into the icy waters of the Tay. All seventy-five were lost, including Sir Thomas's son-in-law. The disaster stunned the whole country and sent shock waves through the Victorian engineering community. The ensuing enquiry revealed that the bridge did not allow for high winds. At the time a gale estimated at force ten or eleven had been blowing down the Tay estuary at right angles to the bridge. The engine itself was salvaged from the river and restored to the railways for service.

1881 A Select Committee inquired, during 1880, into the question of replacing the structure that failed in December, 1879, and reported that the bridge should, in the interests of the public and the railway company, be reconstructed, but that it should be 77ft. instead of 8ft. above high water. It was also recommended that the North British Railway should obtain approval of its plans by two or three independent engineers of unquestionable standing and experience. The plans of the present bridge were, therefore, prepared by William Henry Barlow, and William Arrol and Co were the contractors.[2]

A new double-track bridge was designed by William Henry Barlow and built by William Arrol and Co 59 ft upstream of, and parallel to, the original bridge. The bridge proposal was formally incorporated in July 1881

The stumps of the original bridge piers are still visible above the surface of the Tay even at high tide.