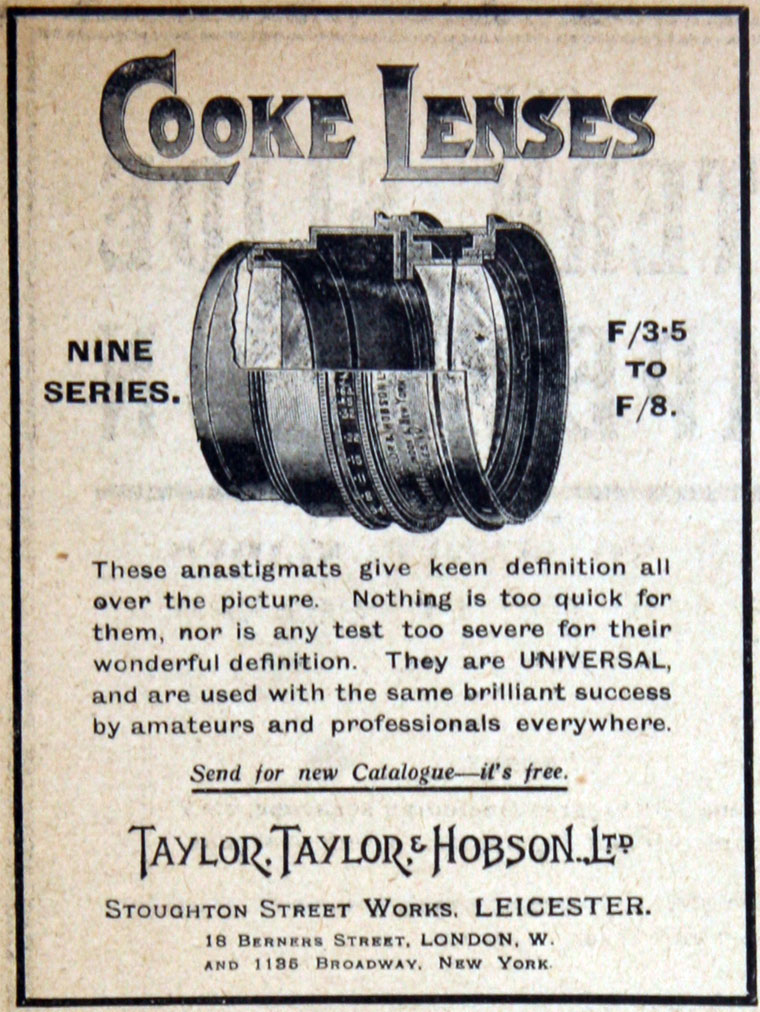 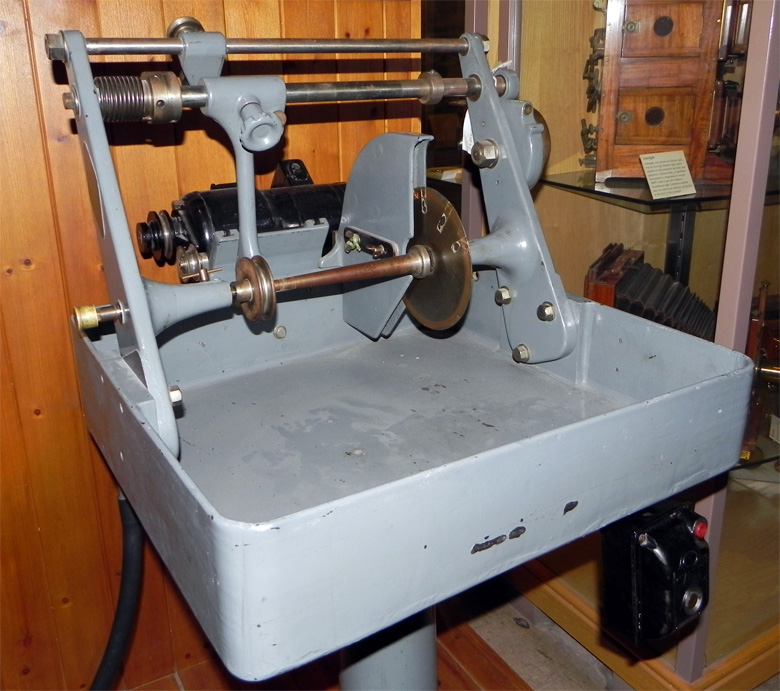 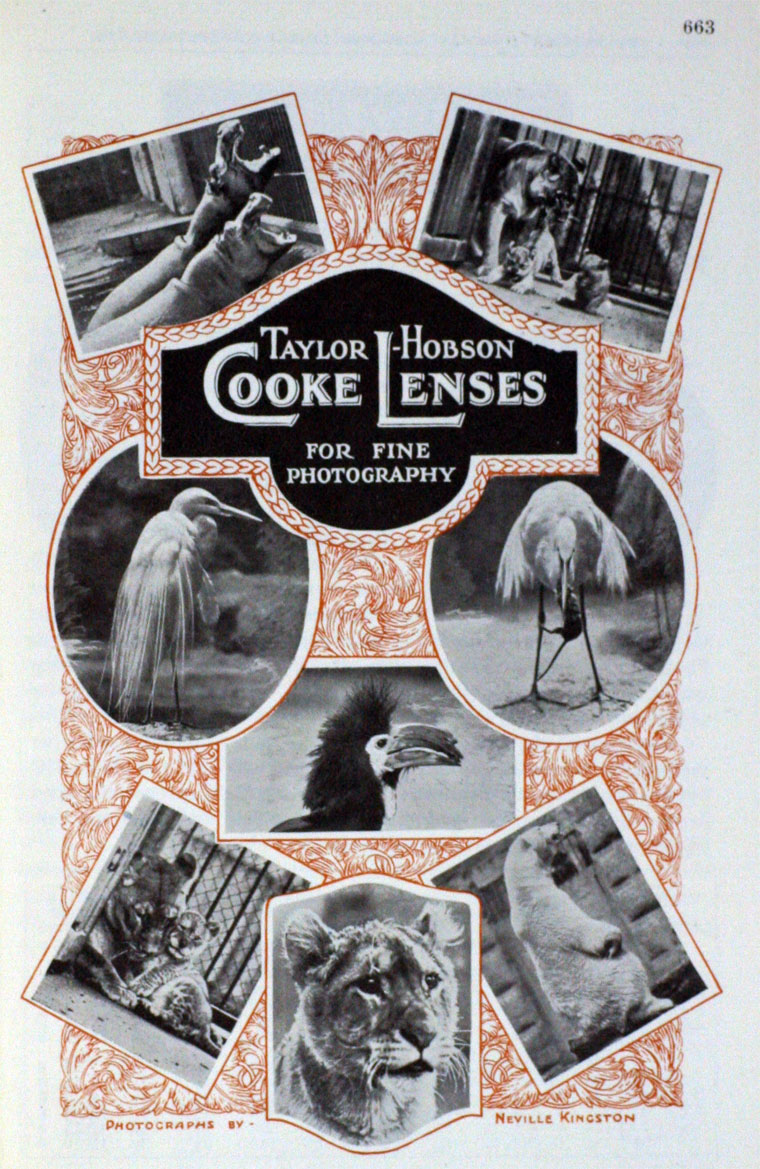 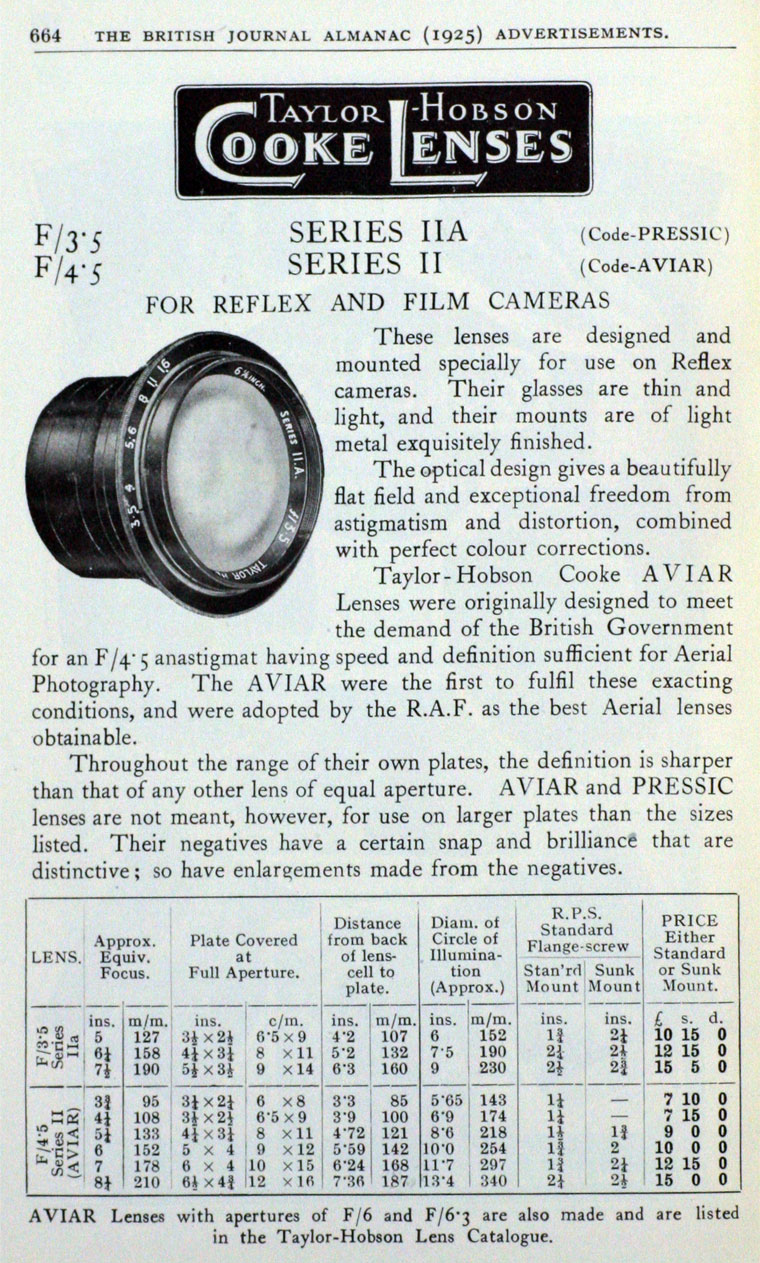 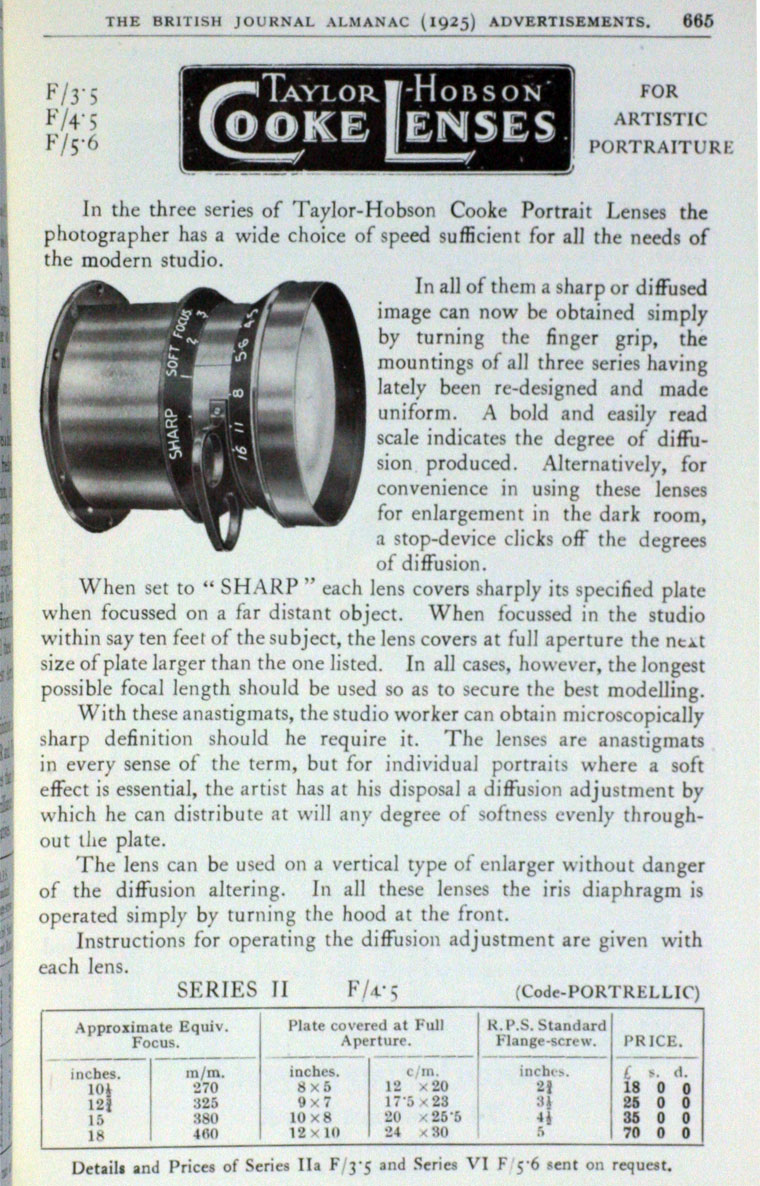 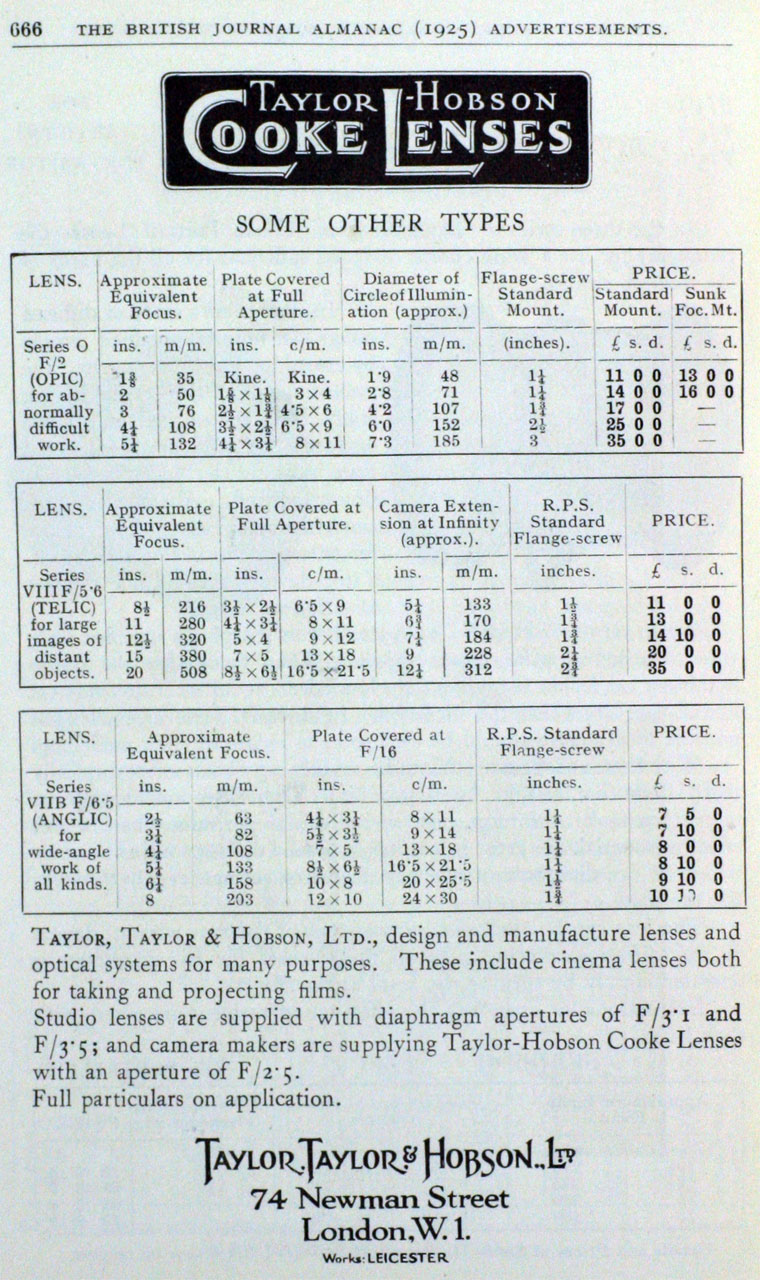 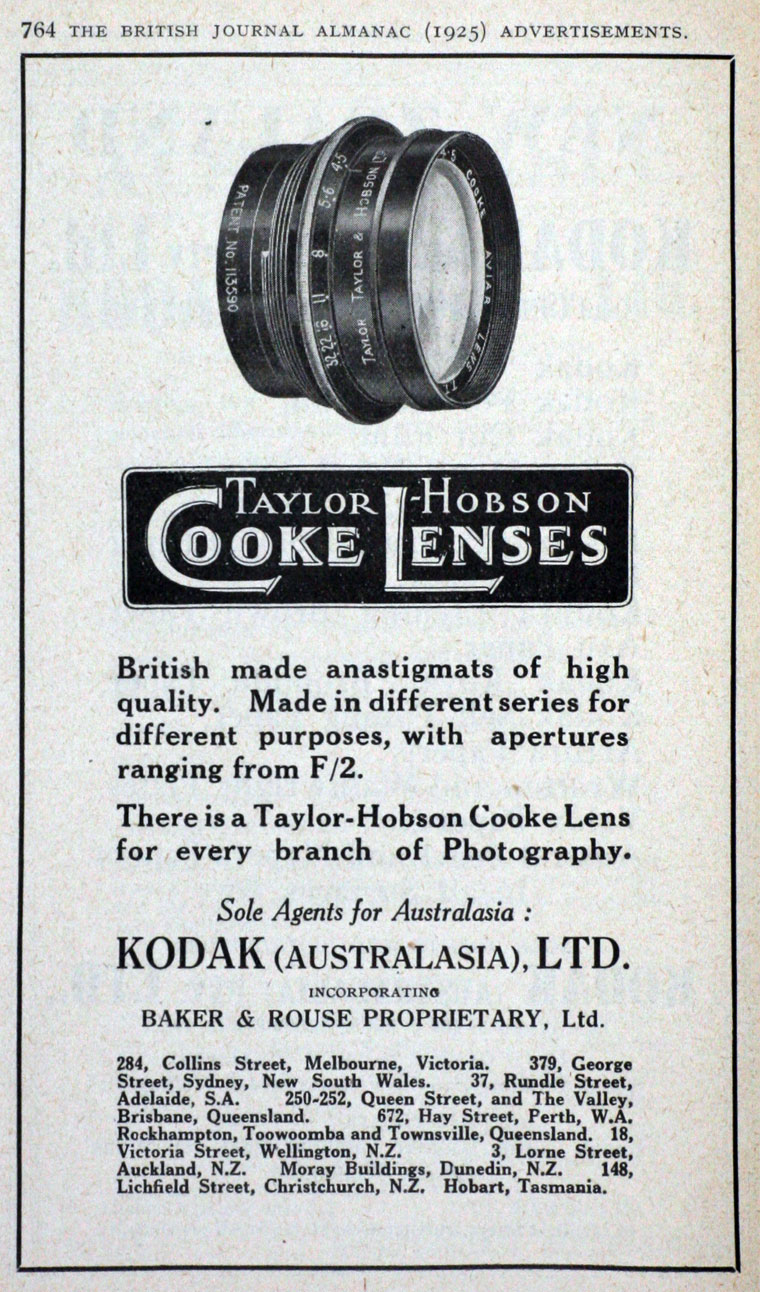 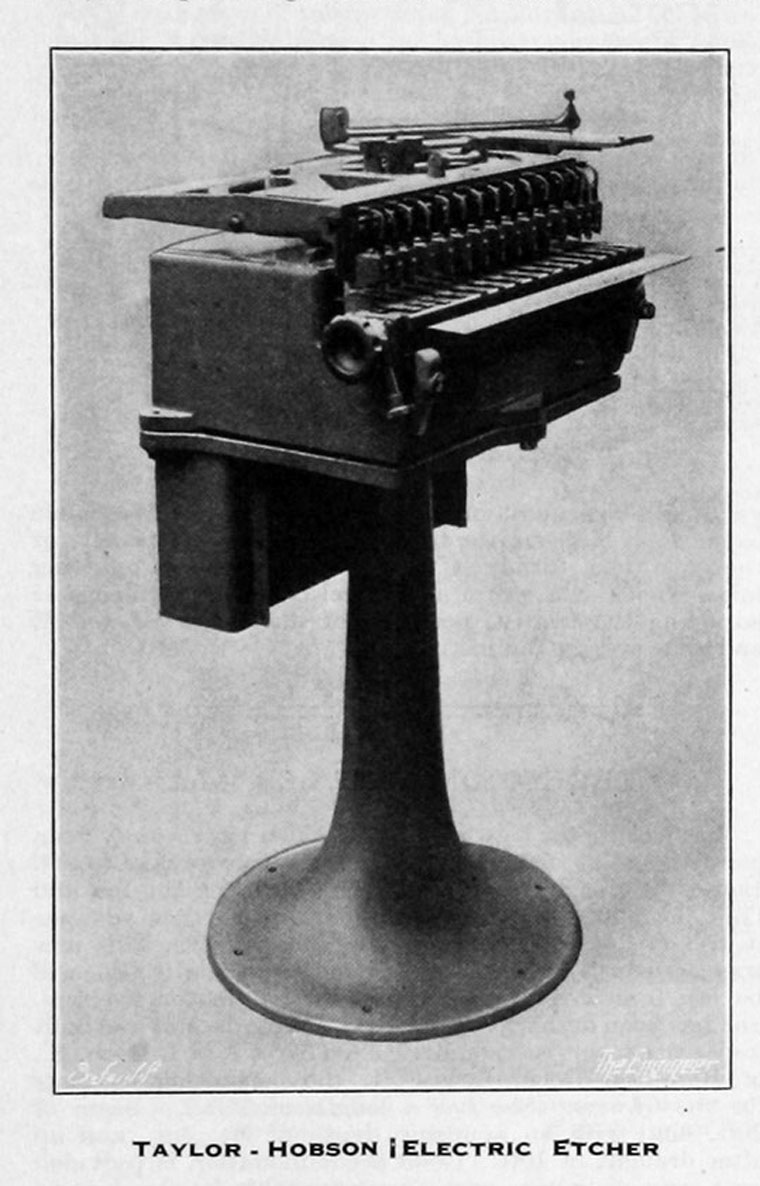 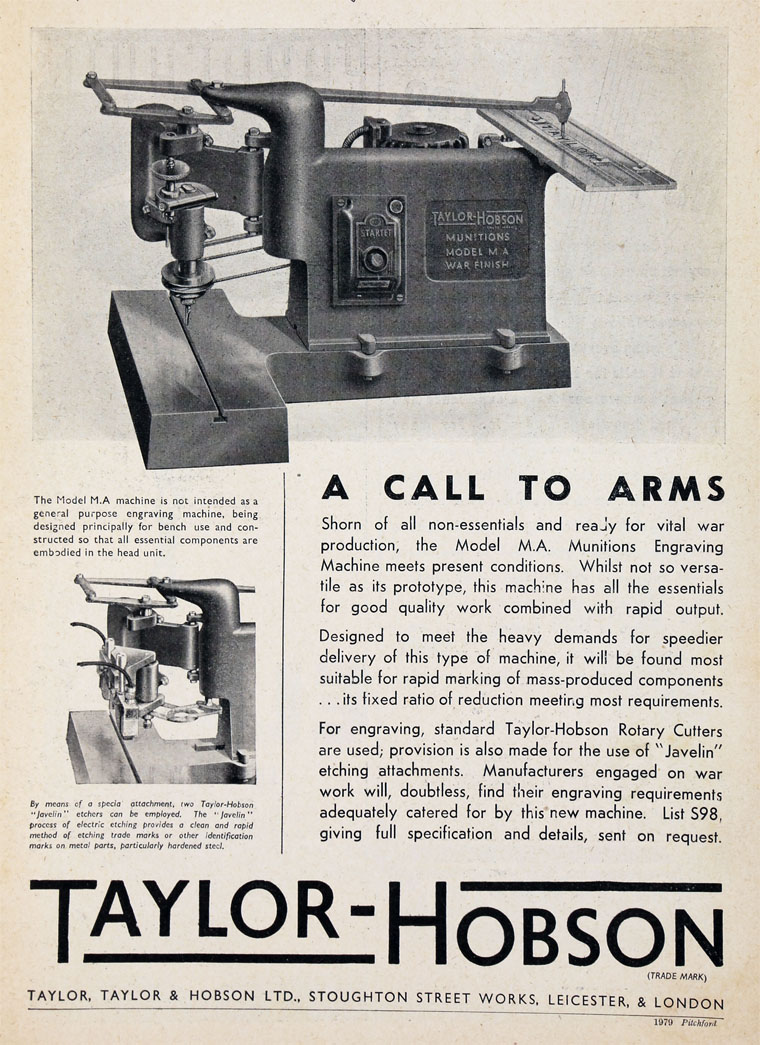 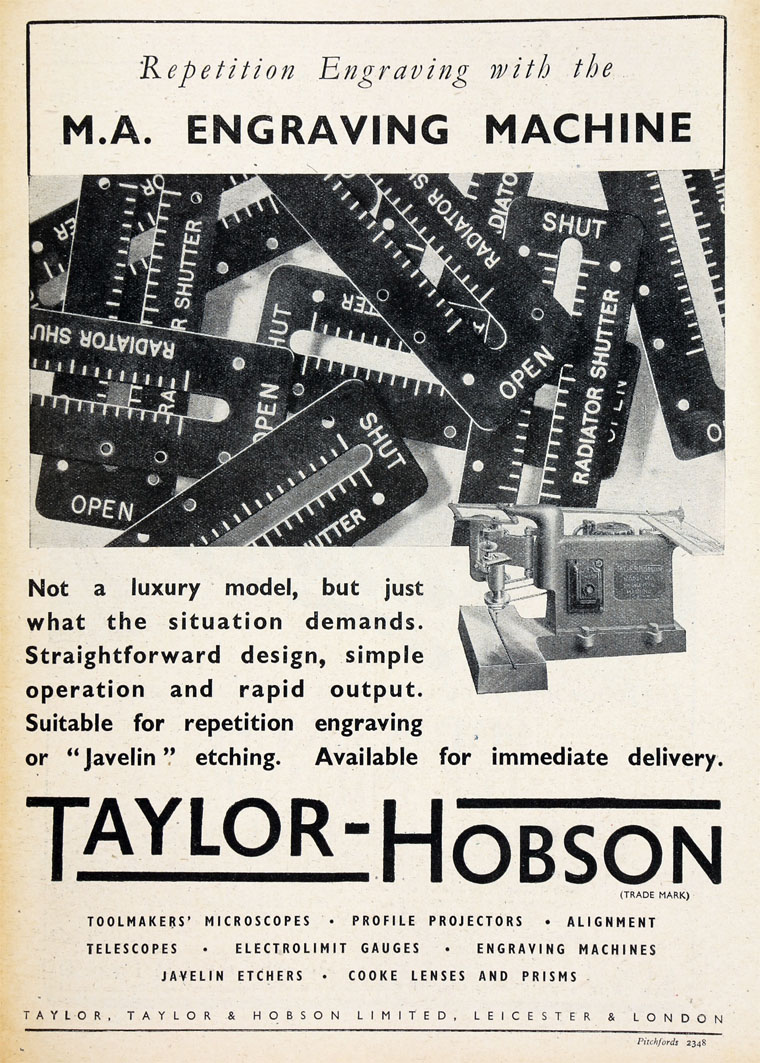 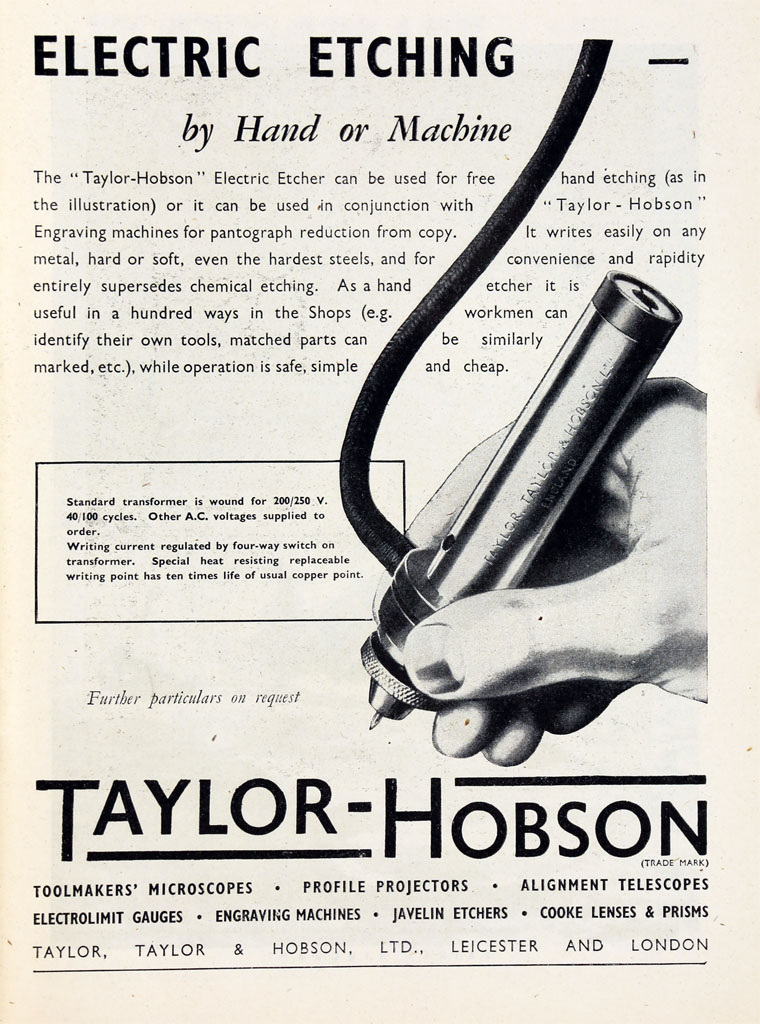 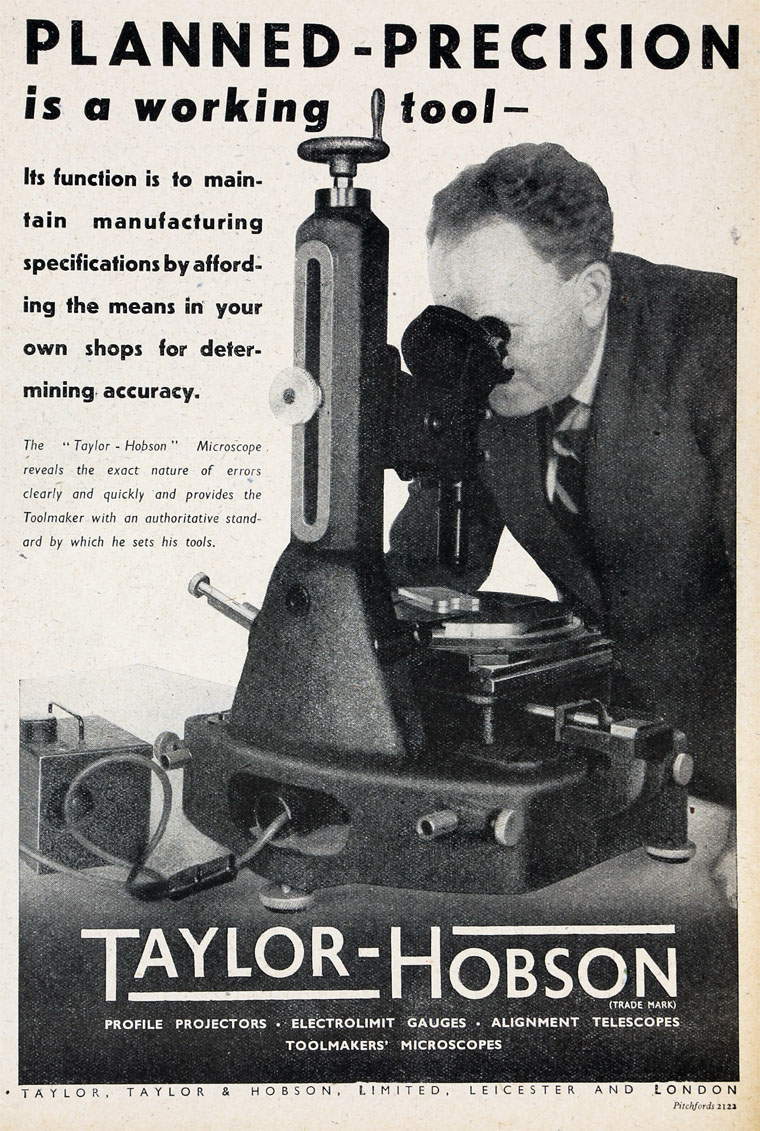 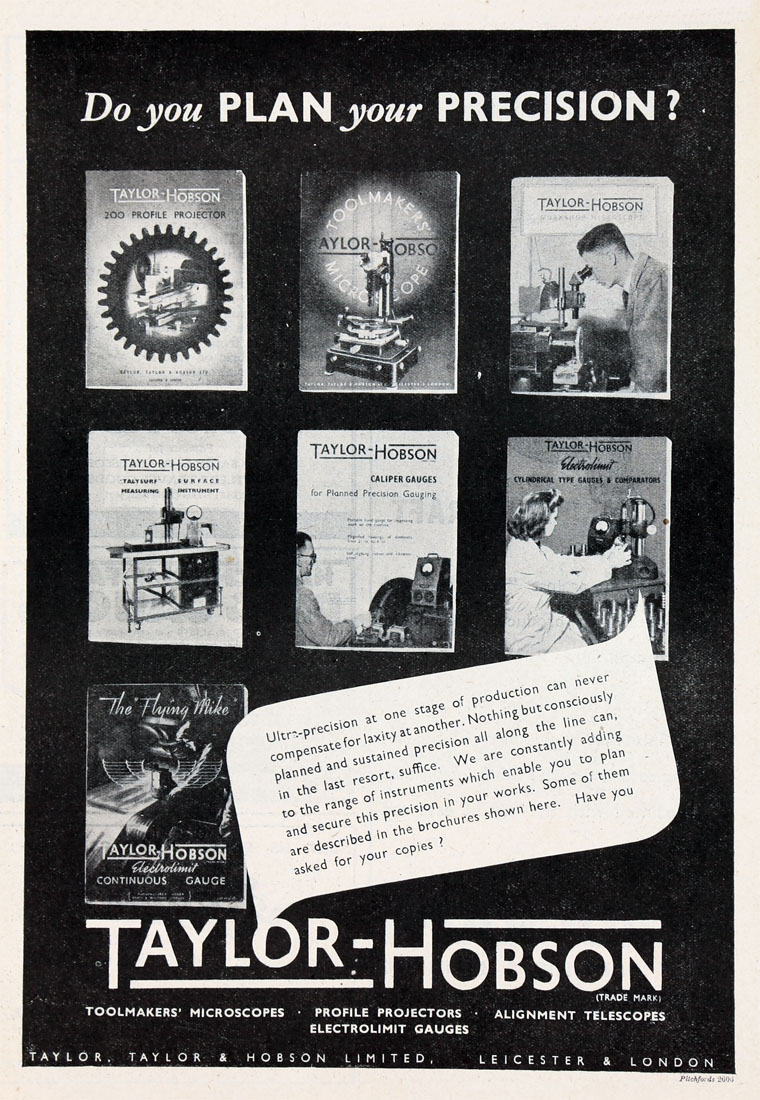 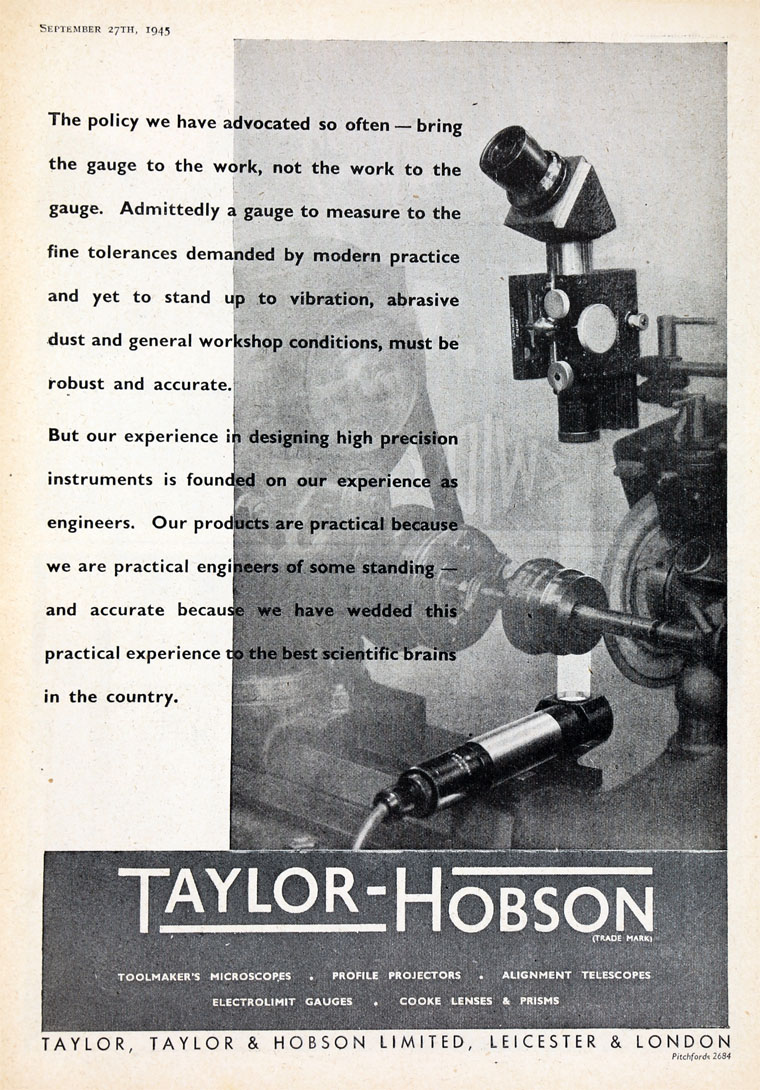 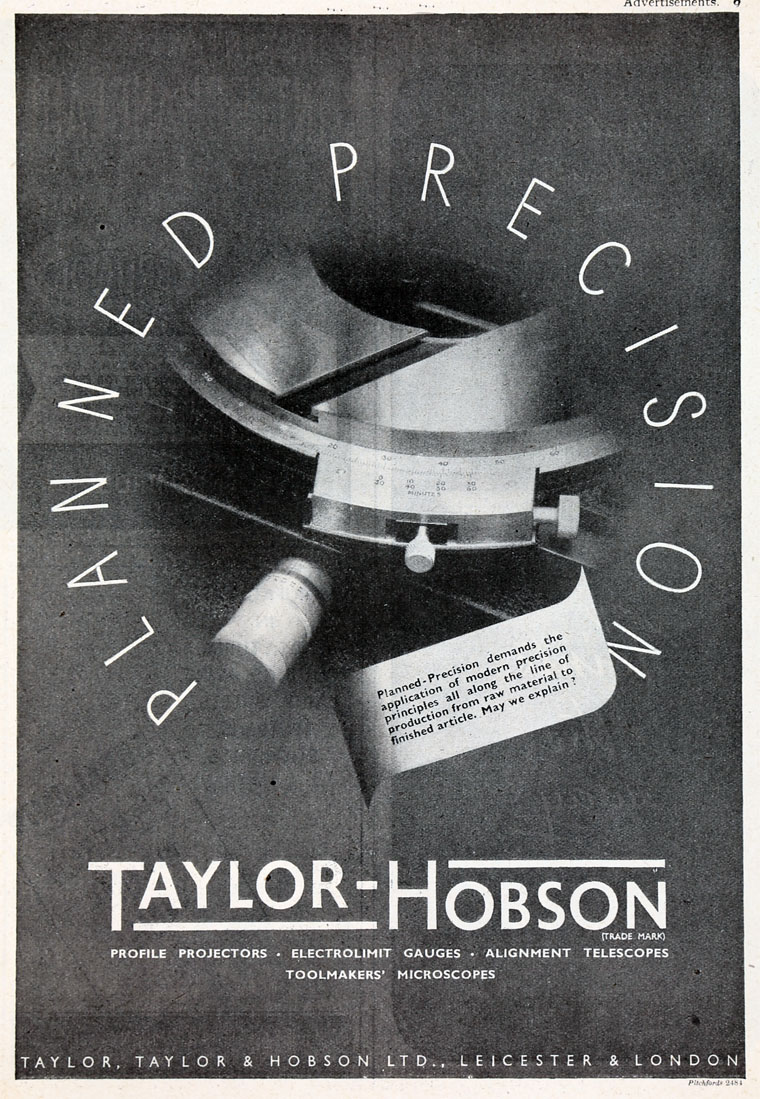 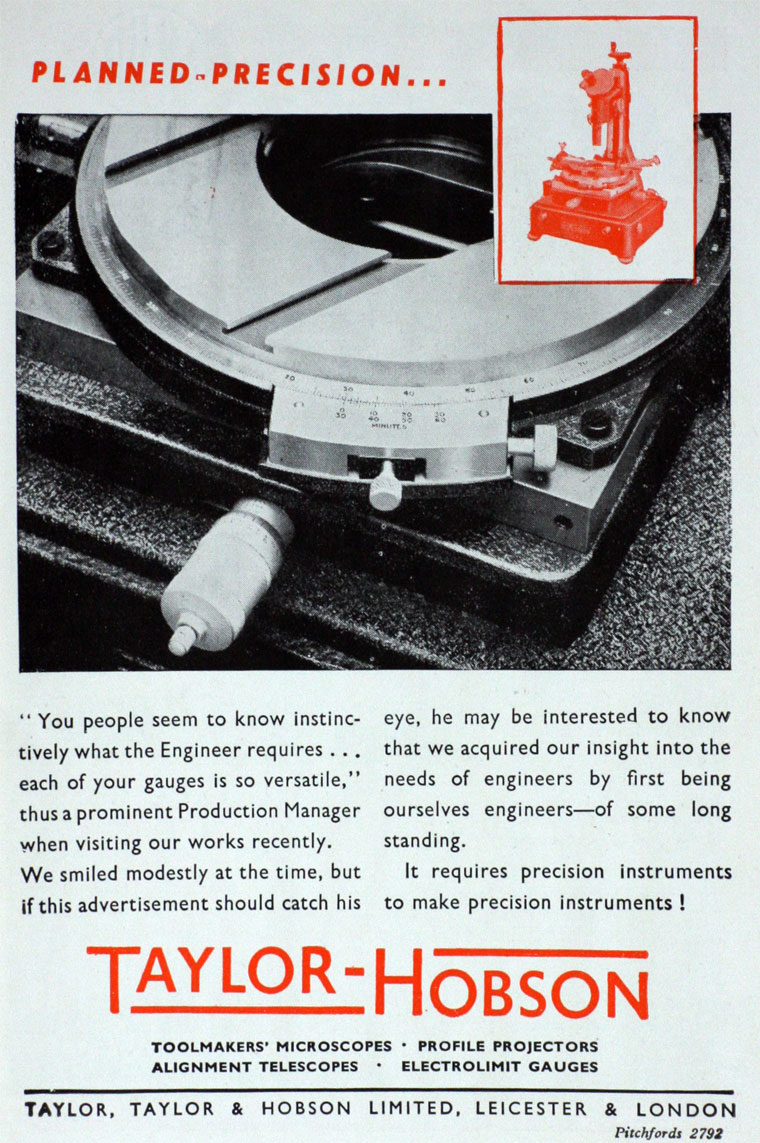 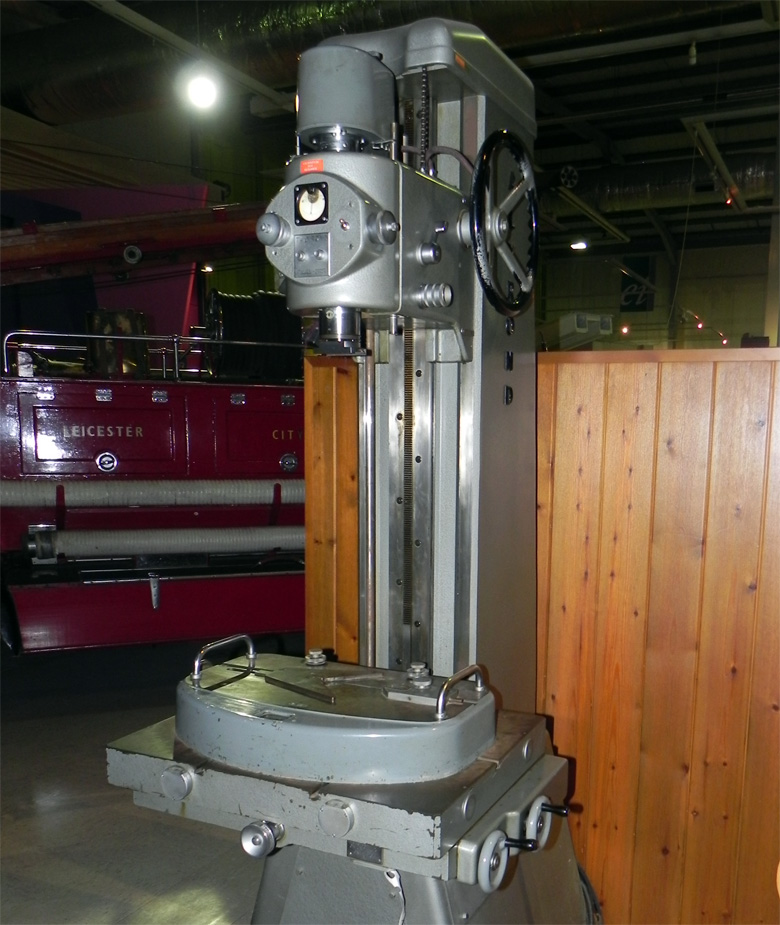 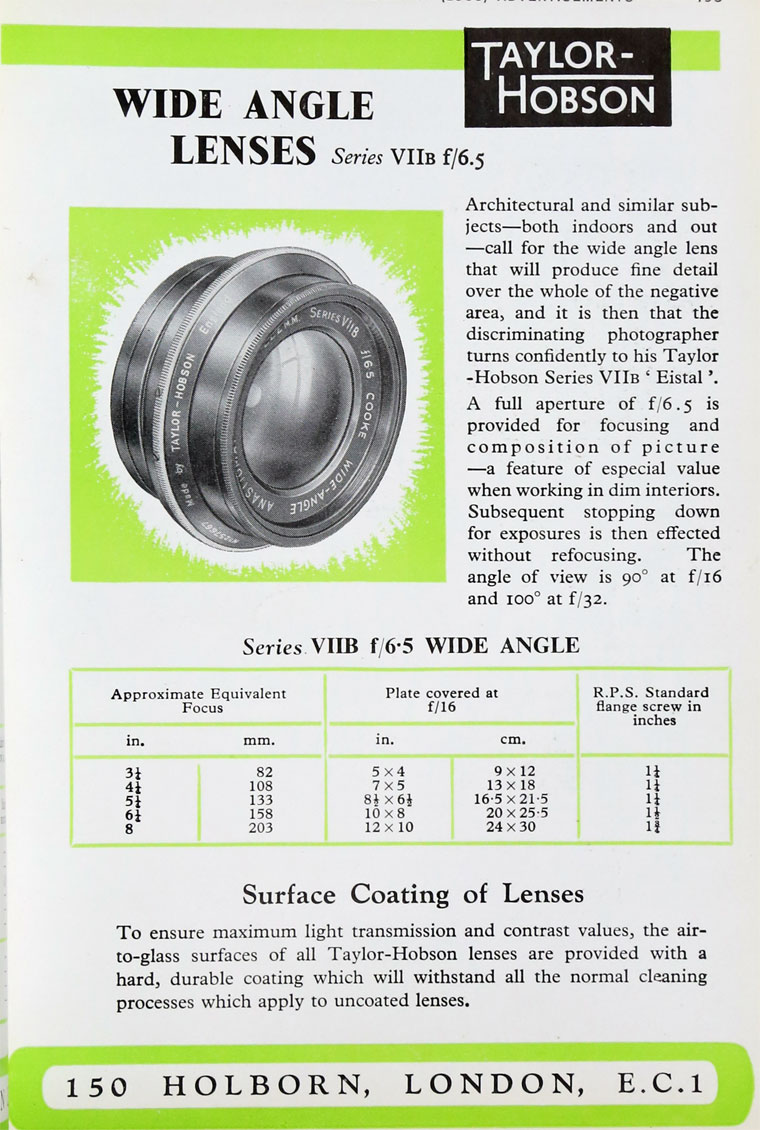 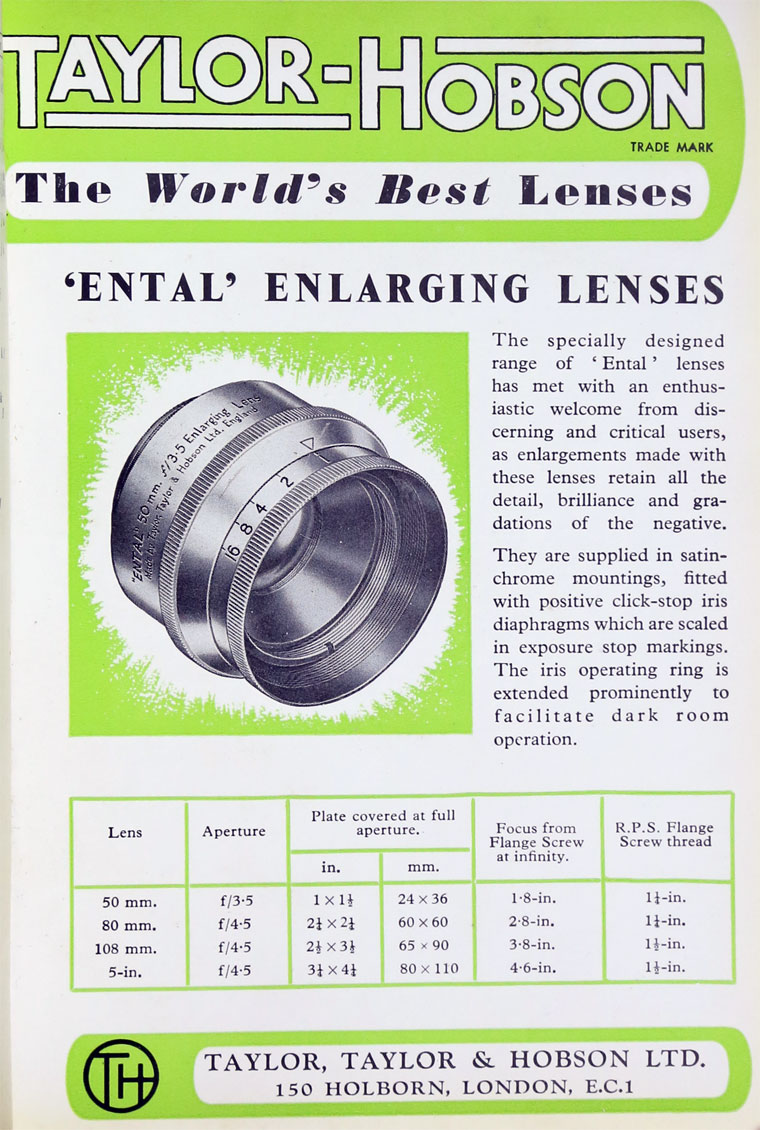 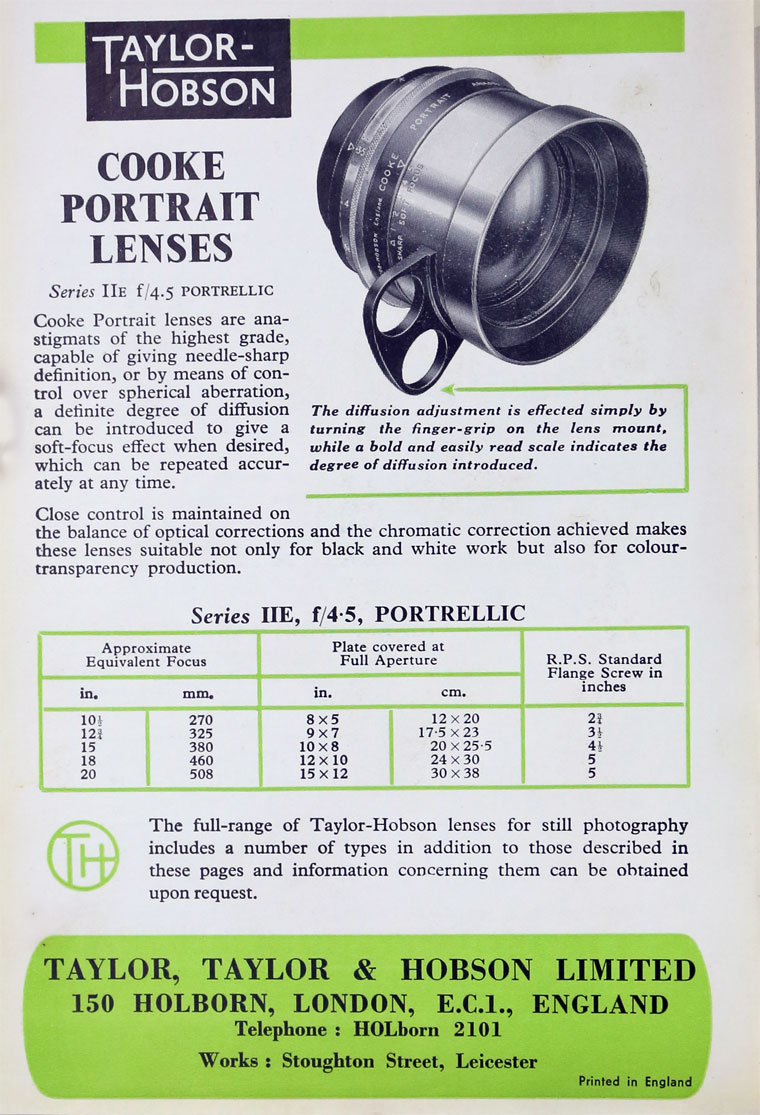 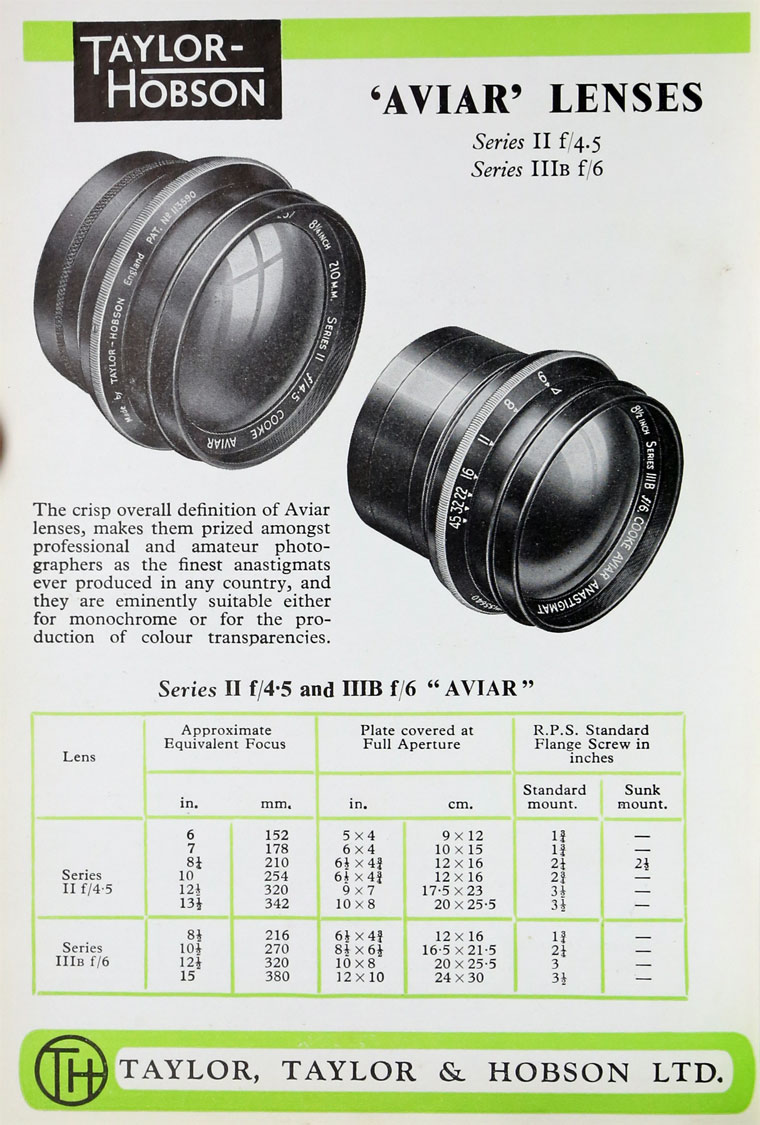 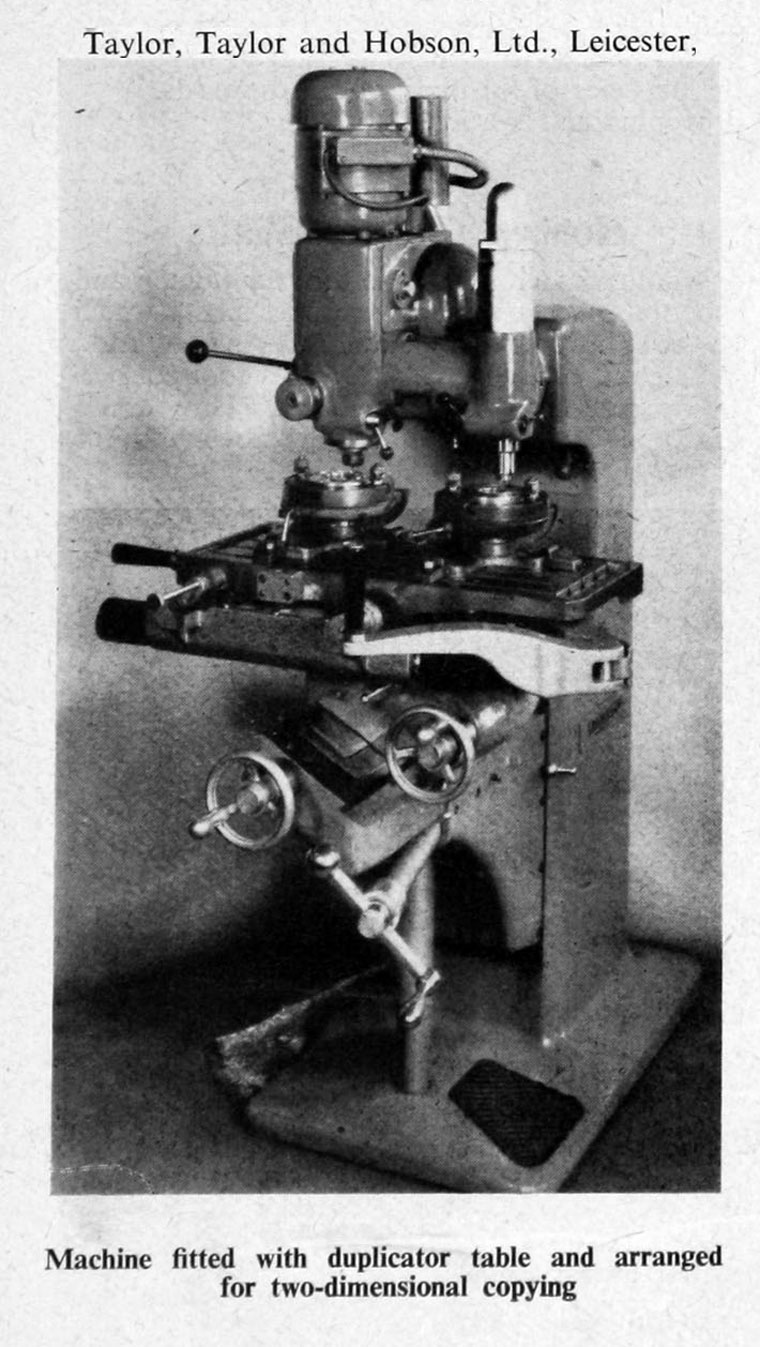 1959. Machine with Duplicator Table and arranged for Two- Dimensional Copying

1886 Formation of the company T. S. and W. Taylor when brothers William Taylor and Thomas Smithies Taylor started a company to make lenses. William was the genius of the company and believed that it wasn't worth starting to make a product before you could measure it. This led him to examine the processes of lens making and the methods of grinding and polishing glass. It would be another 50 years before the company, hampered by lack of suitable inspection equipment, would develop its own metrology products.

1887 Herbert William Hobson joined and became the sales face of the company.

1893 H. Dennis Taylor the manager of T. Cooke and Sons, patented the "Cooke Triplet" lens, made of three optical elements of different sorts of glass. With this construction, chromatic aberration was reduced to a minimum. Taylor took his design to Taylor, Taylor and Hobson (no connection) for manufacture. This lens became the most consistent in quality worldwide.

1896 Partnership dissolved. '... the Partnership heretofore subsisting between us the undersigned Thomas Smithies Taylor William Taylor and Herbert William Hobson carrying on business as Scientific Instrument Makers at Slate-street Leicester and No. 8 Charing Cross-road London under the style or firm of Taylor Taylor and Hobson has been dissolved by mutual consent as and from the first day of September 1896. All debts due to and owing by the said late firm will be received and paid by the said Thomas Smithies Taylor and William Taylor who will continue to carry on the business...'[1]

1901 Incorporated as a limited company.

1914-18 Developed the Aviar lens for photographing from aeroplanes. This gave the allied airforce supremacy. Also contributed to the war by developing binoculars, bores for rifles and lenses for range-finders.

ca.1924 Name changed from Taylor, Taylor and Hobson to Taylor-Hobson

1939 Taylor Hobson came to supply over 80% of the world's lenses in film studios, especially in America, where Hollywood was beginning to dominate the industry.

1940 Taylor Hobson began to manufacture more accurate lenses, and realised the need for instruments that would measure the perfection of each lens. Without anything else on the market, Taylor Hobson invented something themselves, the first Talysurfs and Talyronds, which led the inspection and measurement industry for years to come.

1941 Talysurf 1 - the world's first true surface texture measuring instrument. It became the standard for reference and controlling surface finish in the manufacturing shop.

1947 One of the companies within the J Arthur Rank Organisationthat were involved in scientific research[5]. Products included lenses, precision photographic shutters, optical instruments.

1949 Talyrond 1 - the world’s first roundness measuring instrument invented but only 1 unit was made and used at Taylor Hobson's premises. Customers had to send parts to Taylor Hobson to be measured.

1954 Talyrond 1 went into production after demands from customers.

1965 Development of the hand-held Surtronic, bringing surface finish to the shop floor at an economical price.

1966 Development of the Talystep step height and surface finish instrument.