Grace's Guide is the leading source of historical information on industry and manufacturing in Britain. This web publication contains 140,429 pages of information and 227,382 images on early companies, their products and the people who designed and built them. 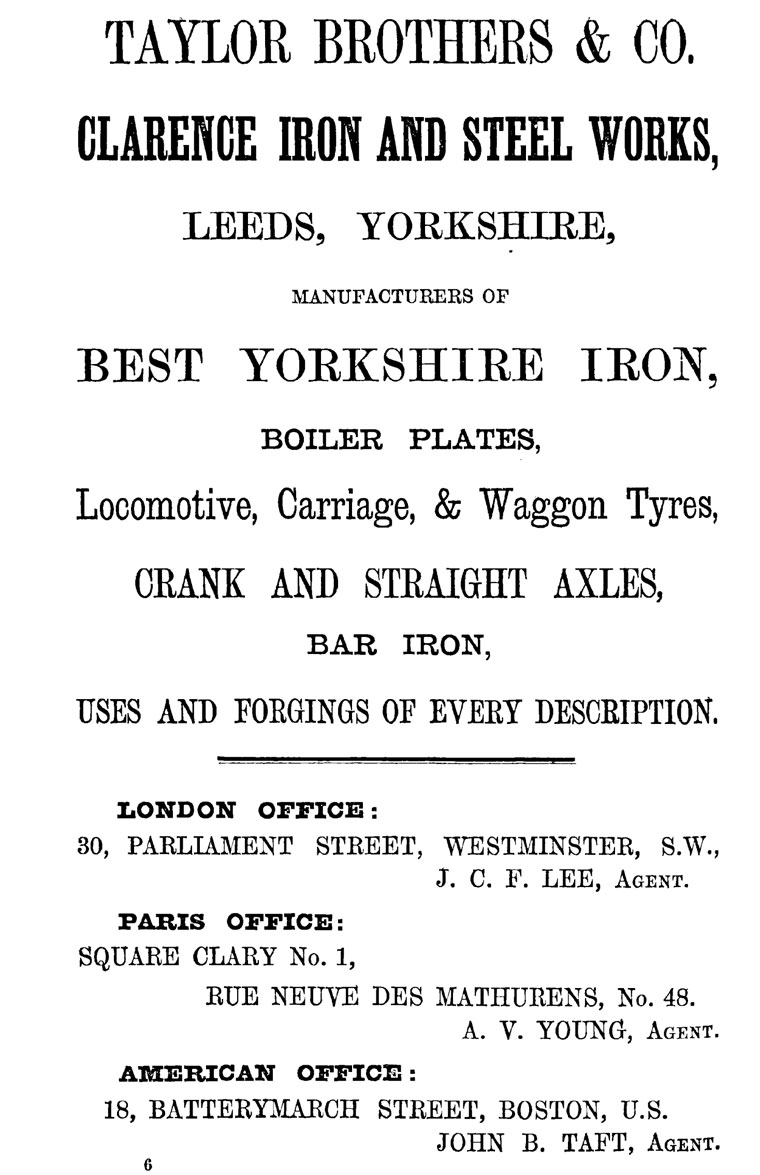 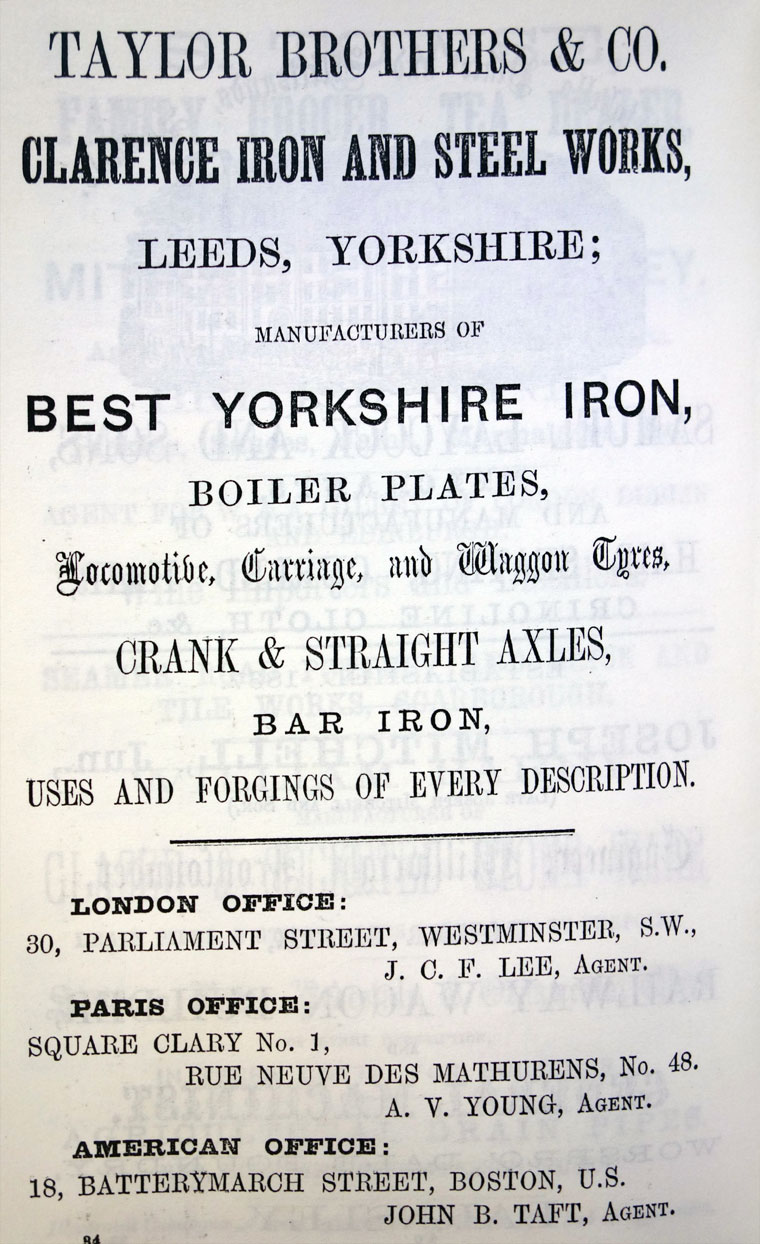 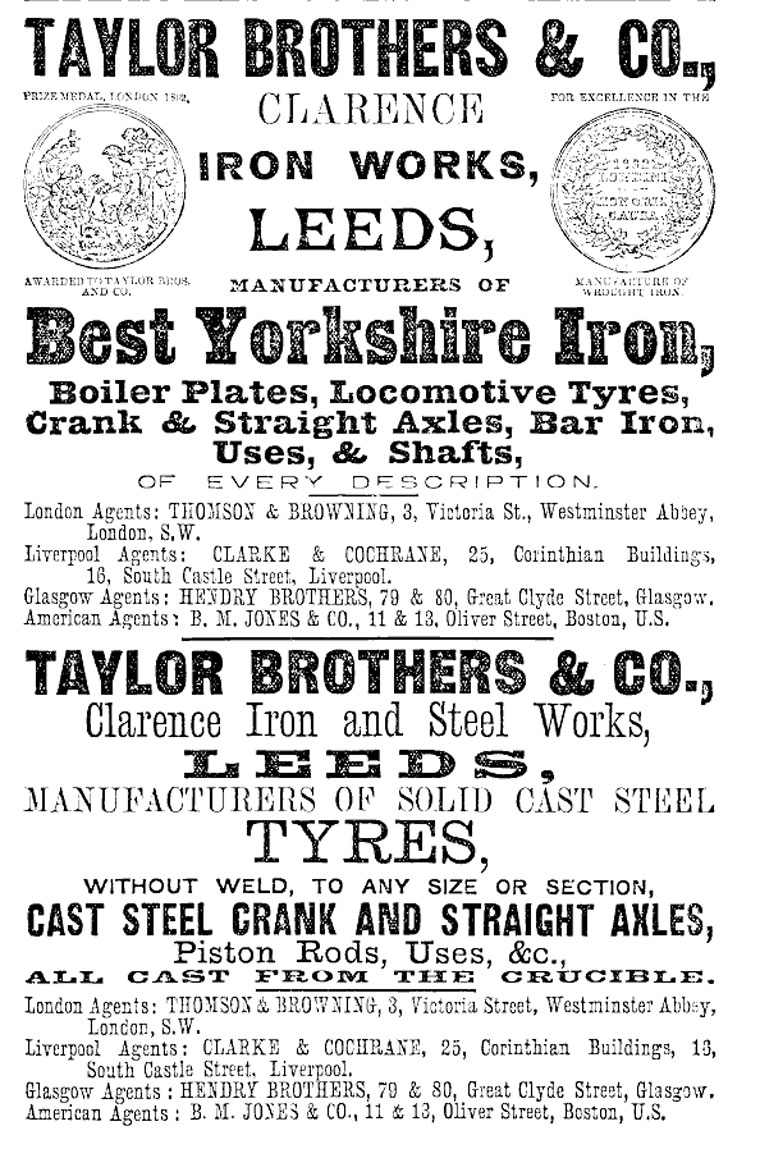 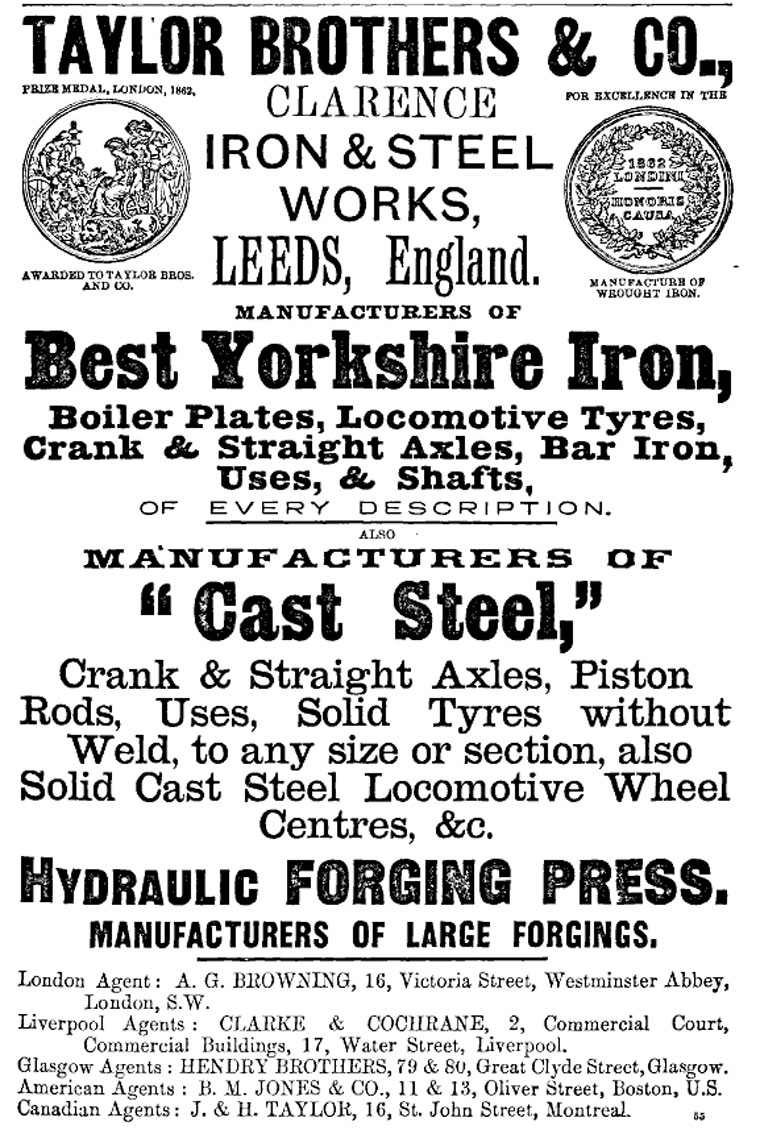 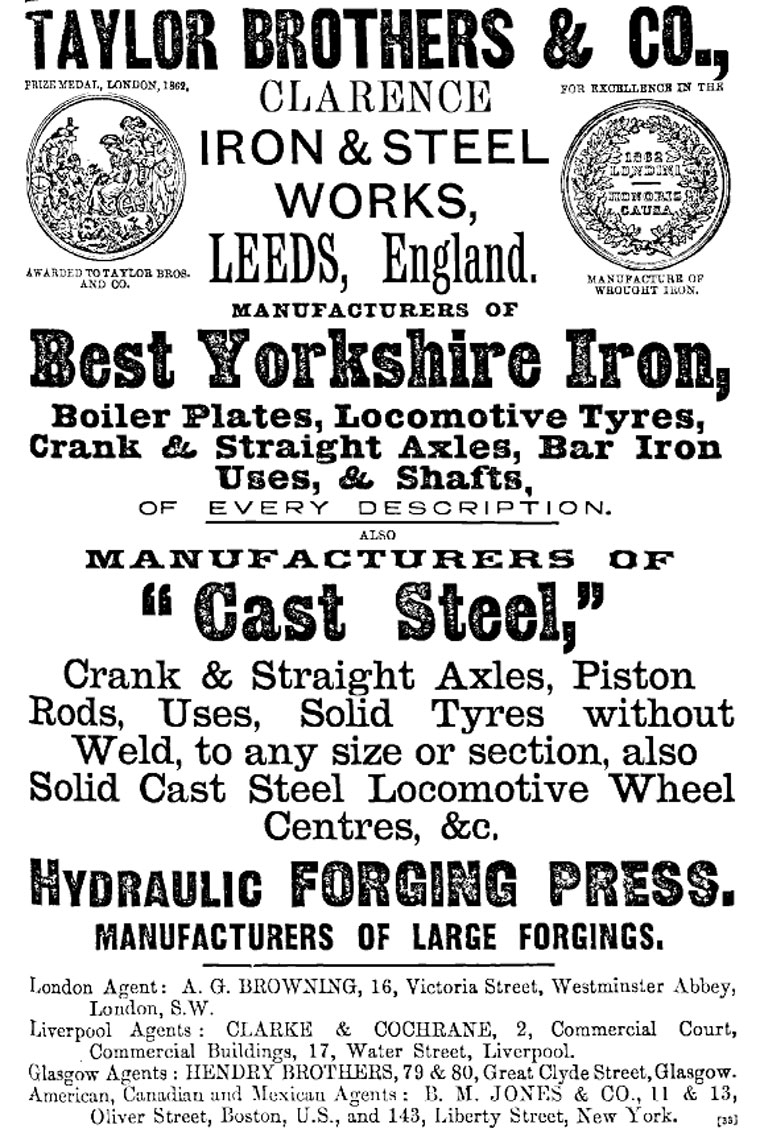 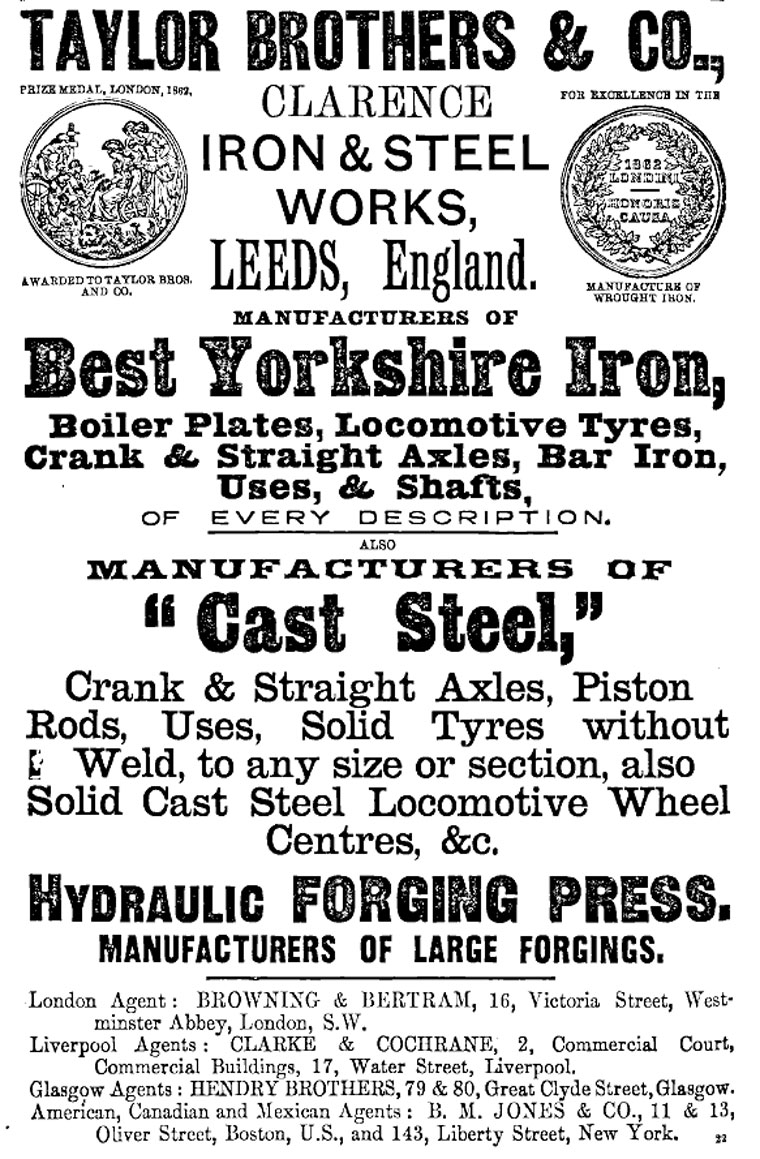 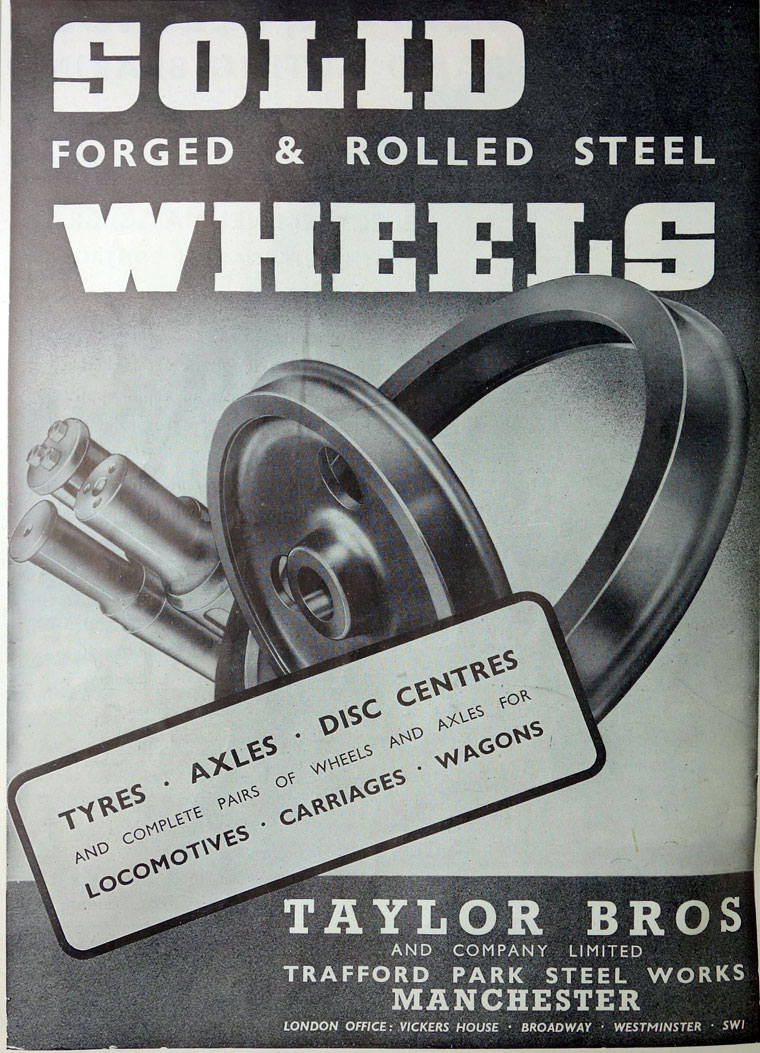 of Clarence Iron and Steel Works, Leeds and later in Trafford Park, Manchester

1876 Members of the Iron and Steel Institute visited their ironworks. [2]

1879 Herbert Taylor retired from the partnership with Thomas Albert Oakes Taylor as Ironmasters, under the firm of Taylor Brothers and Co., at the Clarence Ironworks, Hunslet, Taylor[3]

1905 The company was registered on 26 August, to acquire the business of the firm of the same name, iron and steel manufacturers. [5]

1919 Metropolitan Carriage, Wagon and Finance Co arranged to take-over the company, which would supply materials to Metropolitan's railway works at Manchester but Metropolitan was then acquired by Vickers Ltd who also acquired Taylor Brothers.

1920 New works were built at Trafford Park, Manchester [6] and a plant was installed for the production of railway carriage and wagon wheels, tyres and axles. This plant included seven Siemens Open-Hearth Furnaces, fifteen puddling furnaces and three bar mills.

1928 Merger of companies in the steel industry announced, involving parts of Vickers, Vickers-Armstrongs and Cammell, Laird and Co[9]. This would involve all of the steel interests of the 3 contributing groups, except for interests in guns, ammunition and tanks. A new company would be created to take over these interests: the English Steel Corporation Ltd. The contribution from Vickers was Taylor Brothers and Co.

1932 Davy Brothers received an order worth £202,000 from the Russian Government for a complete plant for producing railway wheels on a patent process of the Edgewater Steel Co of Pittsburgh. Work to be carried out in conjunction with Taylor Brothers of Manchester[10]

Sold to a ABB

Subsequently became part of ADtranz. They closed down the forging and heat treatment activities at Trafford Park c.1999.

2000 Business purchased by Lucchini, for machining and assembly of wheel and axle forgings imported from Italy.