Grace's Guide is the leading source of historical information on industry and manufacturing in Britain. This web publication contains 140,254 pages of information and 227,382 images on early companies, their products and the people who designed and built them. 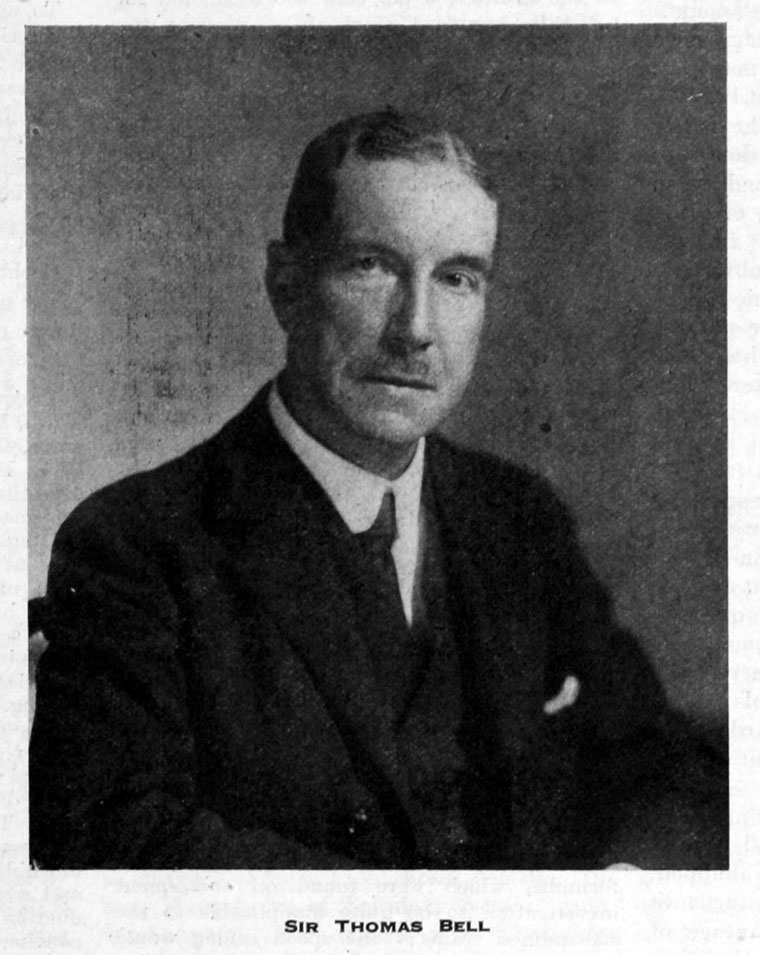 WE record with deep regret the death of Sir Thomas Bell, which occurred, at the great ago of eighty-six,. on Wednesday, January 9th, at his home, Furzccroft, Helensburgh, Dumbartonshire.

Throughout the whole of his long and distinguished career, Sir Thomas was prominently associated with the Clyde shipbuilding industry. When he retired from the position of managing director of John Brown and Co., Ltd., in 1935, Sir Thomas had been actively engaged at the Clydebank Yard for almost fifty years. He continued to serve on the board for a further eleven years when, owing to his advancing years, he relinquished his directorship.

He received the earlier part of his education at the Gymnasium, Celle, Hanover, and at King's College School, London, and in 1880 entered the Royal Naval Engineering College, Devonport.

In June, 1886, Bell passed the educational and professional examination for entry as an Engineer Officer in the Royal Navy, but later that year he joined the engine drawing-office staff of the Clydebank engineering and shipbuilding works, which at that time, were owned by James and George Thomson. Bell's promotion was rapid. He became chief draughtsman and designer at Clydebank, and, in 1895, he was appointed outside manager and assistant to the engineering director.

The history of the Clydebank establishment goes back to 1846, when steam navigation had scarcely passed the experimental stage. Its long association with the Cunard Company began in 1852, and, from the time that he joined the staff until his retirement, Sir Thomas Bell was intimately concerned with the design and construction of many famous Cunard ships, and with the building of many warships of various kinds.

During his period as chief draughtsman and designer, for example, the Clydebank Yard received a contract for H.M.S. "Terrible," which was completed in a remarkably short time. The order was placed at the beginning of 1894, work began on March 12th of that year, and the ship was launched on May 27, 1895, fourteen months from laying the keel. It was a considerable achievement for those days, and an indication of the energy and enthusiasm which Sir Thomas Bell brought to all his responsible undertakings in the shipbuilding industry.

In 1898, negotiations were opened for the acquisition of the Clydebank Yard by John Brown and Co., Ltd., of Sheffield. The purchase was completed early in the following year, and shortly afterwards the now owners were able to report the delivery of the Japanese battleship "Asahi," the Cunard steamship "Saxonia.," and of five destroyers for Her Majesty's Navy.

In March, 1899, Thomas Bell was appointed manager of the shipyard, and in the years that followed many notable ships were built at Clydebank. Among them may be recalled the "Carmania," which was completed for the Cunard Company in November, 1905. She was the first ship to be fitted out at G1ydebank with a direct-driven turbine installation. The successful performance of this machinery led to a similar installation in the "Lusitania," which was completed in 1907, and in the still larger "Aquitania," which was delivered in 1914. The service performance of the " Lusitania " was fully described in a paper which Sir Thomas presented at the spring meeting of the Institution of Naval Architects in 1908.

But Bell's initiative in the selection of propelling machinery was not restricted to transatlantic liners. In 1916, Clydebank delivered the first naval vessel fitted with geared turbines, and, in 1921, completed the battle cruiser H.M.S. "Hood," which was engined with geared turbine machinery. Some years later, it will be recalled, geared turbines were installed in the "Empress of Britain," which was delivered by Clydebank in 1931, and which influenced the design of the propelling machinery for two of Clydebank's most famous ships, the "Queen Mary" and the "Queen Elizabeth."

Another advance in marine engineering with which Sir Thomas Bell was closely concerned was the adoption of oil fuel for t;hips round about 1913. Prior to that time oil fuel had been used with coal in some naval vessels, but the "Niagara" was the first merchant ship to be equipped at Clydebank for oil burning.

Sir Thomas Bell was elected to the hoard of John Brown and Co., Ltd., in 1908, and became engineering director in charge of the Clydebank shipyard and engine works in the following year. There was a full programme of naval and civilian work in hand, the former including the building of the cruiser "Bristol," the first ship to be fitted on the Clyde with Brown-Curtis turbines.

Sir Thomas had made arrangements, during a visit to the U.S.A., for his company to take out a licence for the Curtis turbine, a step which resulted in Mr. (now Sir) Stephen Pigott coming to Clydebank to superintend the design and manufacture of this class of turbine machinery.

The outbreak of the first world war, of course, brought additional responsibilities to the Clydebank Yard, and to Sir Thomas Bell. The war output from the yard was a significant one.

In May 1917, Sir Thomas was appointed Deputy Controller of Dockyards and War Shipbuilding at the Admiralty, and on that account resigned temporarily from the board of his company. He held office at the Admiralty until the end of 1918, his distinguished services being recognised by his creation as K.B.E.

Sir Thomas rejoined the board of John Brown and Co., Ltd., in 1919, and was appointed a managing director. The years that followed were difficult ones for the shipbuilding industry, and Clydebank sufferred its full share of the depression. Nevertheless, during 1930 and 1931, negotiations proceeded between the Cunard Company and John Brown and Co., Ltd., for the building of the "Queen Mary," or "No. 534," as she was then known.

The "Empress of Britain" was completed for the Canadian Pacific Line in June, 1931, and the contract for the new Cunarder was particularly welcome. The world-wide financial crisis, however, was in fu11 swing, and shortly after work on the "No. 534" had been started, the owners found it necessary to ask for a suspension. It meant the virtual closing of the Clydebank Yard - a bitter blow to John Brown and Co., Ltd., and its managing director, as at the time it was impossible to envisage when work on the new ship would be resumed.

A year or so later, however, a gradual improvement of the position could be detected, and, following strenuous efforts on the part of Sir Thomas Bell, his fellow directors, and other notable people, it was announced on April 3, 1934, that work on "No. 534" was to be resumed. The liner, it wi11 be remembered, was launched on September 26th of that year by H.M. Queen Mary, who gave the ship her name.

At the end of March, 1935, Sir Thomas relinquished his position as managing director of John Brown and Co., Ltd., but continued to serve on the board. By then, he had completed forty-nine years at Clydebank, and it was readily acknowledged that the high reputation and succcss of the shipyard had been largely due to his untiring efforts. From the outset of his career, Sir Thomas showed a keenness for all aspects of technical development and progress in shipbuilding and marine engineering.

Sir Thomas was an honorary vice-president of the Institution of Naval Architects, a member of the Institution of Civil Engineers, and a member of the Institution of Engineers and Shipbuilders in Scotland. Less than a. month ago the centenary of the Clydebank shipyard was celebrated. Among the tributes paid on that occasion was one to Sir Thomas Bell, "one of the personalities who had so successfully guided the destinies of the yard." Lord Weir fittingly referred to Sir Thomas as a sterling character of strict integrity-a description which will be readily endorsed by the shipbuilding and engineering industries in which he held such a distinguished position.